From the martial prowess of the Boros Legion to the information brokerage of House Dimir, the five guilds we find in Guilds of Ravnica are unique within Magic's history. Each guild has a specific purpose and plan, and each guild operates to maximize their advantages over the other guilds. And each guild is a pair of two colors packed with legendary creatures and powerful spells all their own.

In other words, each guild on Ravnica is perfect to pick up Commander inspiration. Getting started with Commander is as easy as getting up to speed and picking a legendary creature to lead the way, but knowing how to make the most of your chosen guild can take a little more time if you haven't played with them before.

This is your shortcut to commanding each guild in Guilds of Ravnica.

House Dimir is the blue-black guild, thematically dedicated to information control and power plays through assassination and extortion. Mechanically, that means Dimir decks have several strengths in Magic.

Dimir decks will typically want to play counterspells and creature removal spells as ways to manage what opponents get to do. Blue packs plenty of ways to draw cards, and the Dimir mechanic surveil lets you look at upcoming cards and choose whether to draw them next or put them into the graveyard—card selection at its finest, especially with Notion Rain or Doom Whisperer. It adds up quickly.

What sets Dimir apart the most is the ability to steal your opponents' great things! Thief of Sanity and Mnemonic Betrayal can both take advantage of the powerful options other players bring to the game, and a commander like Etrata, the Silencer will take out the most salient threats on the battlefield.

As a special note about Etrata, while she typically gets shuffled away by her ability, if and only if she's your commander, you can choose to return her to the command zone instead. It's a handy trick if you want to pressure an opponent with hit counters quickly.

Of course, even the brokers of power have weaknesses. For Dimir, you'll find your creatures aren't always up to size against other colors, and powerful permanents like artifacts and enchantments out of reach for removal—other than trying to return it to someone's hand to use a counterspell on later. Stopping the most relevant threat is your task, which can be challenging if you misevaluate one only to be surprised by another.

Defensive creatures and the ability to survive until our powerful spells come online, from the humble Dimir Informant to the life-giving Blood Operative, help bridge the gap between the early game and when being Dimir shines.

The Selesnya Conclave is the green-white guild dedicated to preserving nature and growing its religious organization that provides support to Ravnicans who are in need. Mechanically, this puts Selesnya as a clear wheelhouse of green and white effects.

Selesnya decks overwhelm opponents with creatures, each individually smaller but cooperating for larger effects. You can gain life and even draw cards thanks to your creatures, and a powerful range of removal spells means everything from other creatures to enchantments and even planeswalkers can be handled.

What really sets Selesnya apart is the total number of creatures you can create. Opponents can reasonably expect every color to offer a large threat or two, but making ten or more small creatures that become 2/2 or 3/3 will quickly outsize even gigantic individual creatures. A commander like Emmara, Soul of the Accord powers up convoke—the signature guild mechanic of tapping creatures to help pay for spells—and works well with early attacks to assemble a respectable force in a hurry.

There's an obvious weakness to relying on many small creatures: spells like Citywide Bust or Ritual of Soot that destroy all of your creatures are devastating—and entirely predictable in games of Commander. Planning around battlefield sweepers with defensive cards, indestructible creatures, or cards that replace themselves will reinforce your plan.

One card in Guilds of Ravnica that feels perfect for a Selesnya deck is Dawn of Hope. An enchantment sticks around through creature destruction, and this one makes it easier to get creatures flowing again. And since the creature tokens it creates have lifelink, you can likely draw extra cards along the way to recover from the storm.

The Izzet League is the blue-red guild dedicated to public works and infrastructure—as well as the unlimited experimentation of what's truly possible behind it all. Mechanically, this plays out with the power of instants and sorceries, creating combinations and value from the almighty mastery of using mana.

Izzet decks carry over some of blue's controlling element, as seen with Ionize, but aren't as demanding on opponents as Dimir. Instead, Izzet crafts larger and more powerful plays to utterly crush opponents—or at least create an unforgettable explosion before going out. Piling up instants and sorceries for the effects that get better with them ensures you can keep up as you move through the game.

What really sets Izzet apart is just how many cards they can draw to set up their plan. With Niv-Mizzet, Parun as commander, the extra cards generated by opponents' plays means you'll have more to work with than other players. Using card drawing to find a key combo card, like Thousand-Year Storm, adds some consistency to an otherwise elaborate idea.

Playing to set up a sequence of spells is hard enough, but Commander amps the difficulty to eleven with the "one copy of a card per deck" rule. Protecting the key pieces you find and drawing as many cards as you can throughout the game is the only way forward. Firemind's Research even turns a card like Risk Factor, which savvy opponents will choose to take damage from, into incremental value.

And in the mayhem, they might just let you draw those cards anyway!

You also need to plan on getting to the late game, which is where cards like Electrostatic Field, Murmuring Mystic, and Erratic Cyclops can fill in the gaps of blocking while giving you extra every time you cast an instant or sorcery. Izzet Locket is both cards and mana, depending on what you need, which makes it a fantastic tool for Izzet players.

The Golgari Swarm is the black-green guild that recycles everything the world-spanning city wastes, as well as provides food for the massive population. Mechanically, this guild, above all others, cares about the graveyard and exchanging one resource, like creatures or life, for another, like cards.

Golgari decks are masters of one thing: the graveyard. While answering almost any threat is within their arsenal too, the ability to play more creatures and get more out of each one provides a smooth if plodding path toward victory. Golgari doesn't rush out of the gate or take total control of a game—it builds up resources turn after turn. Your creatures dying is a feature of the plan, which will cause problems for your opponents.

The Golgari's unmatched potential to convert resources into other things is the true power behind the slower speed. Izoni, Thousand-Eyed looks almost like a Selesnya card if you tilt your head, but it's all Golgari thanks to a desire to play it as late as possible (so you have a packed graveyard) and then convert the creatures created into more cards.

The more mana and the more creatures in the graveyard, the more effective Golgari becomes.

The weakness in this plan is that it's telegraphed and plays out slowly. Opponents will see your graveyard, have a sense of what that means, and plan accordingly. This makes every creature you play vital to supporting the plan. Creatures with deathtouch, creatures that work like removal spells, creatures that put you ahead on mana—piling up "spell creatures" means you'll have plenty of early attacks and ways to slow down incoming damage so your larger threats and spells can start hitting.

And once all those creatures die, cards like Gruesome Menagerie and Vivid Revival keep you pushing forward. If everything is a resource, be sure to use it all!

The Boros Legion is the red-white guild dedicated to providing security for the citizens of Ravnica, up to and including serving as an army to protect the city wherever it may be threatened. Mechanically, this means early creatures, combat proficiency, and even the power of Angels to overcome any defense.

Boros decks muster impressive attackers and clear a path to hit hard every turn. A commander like Aurelia, Exemplar of Justice is reasonable to play early and puts pressure on opponents every turn by herself. With the right mix of other attackers and removal spells, attacking every turn isn't unreasonable.

Creatures with first strike, damage prevention, flying, or even just high power and toughness let Boros dictate the flow of the battlefield. When you can force opponents to react to your plans, you can predict what they might do and prepare accordingly. Clearing away smaller creatures, or the one key blocker they have, matters.

What makes Boros so strong in a draft is what makes it so challenging in Commander: small creatures attacking early aren't enough for the 100-card format. Just like Selesnya, effects that clear the battlefield of creatures are especially challenging when you can expect it every game. Ways to climb back into the attacking seat, such as Dawn of Hope, are vital to success.

The other problem with being an attacking deck is both getting through opponents' defenses and staying on point to defend yourself. While there's far more powerful Equipment available in Magic, the humble Glaive of the Guildpact is a good example to look at. Menace and vigilance pair well for attacking with multiple players, and if you get Boros Guildgate down, you get a +1 to power.

The best plan for Boros decks is to carefully measure out their threats. Putting more onto the battlefield than you need, or extending further when there's already plenty of threats around, just means opponents will be eager to play their battlefield sweeper. Winning wars isn't just combat but the planning you put into it!

Pick your commander and start building! Starting with awesome options in Guilds of Ravnica will only take you so far. Core Set 2019 and beyond is where the real Commander action happens, but knowing what your guild can do means you'll be ready to choose what you need in your deck to make it work. Plus, the upcoming Guilds of Ravnica Guild Kits put even more on-theme (and on-guild) options into your hands. 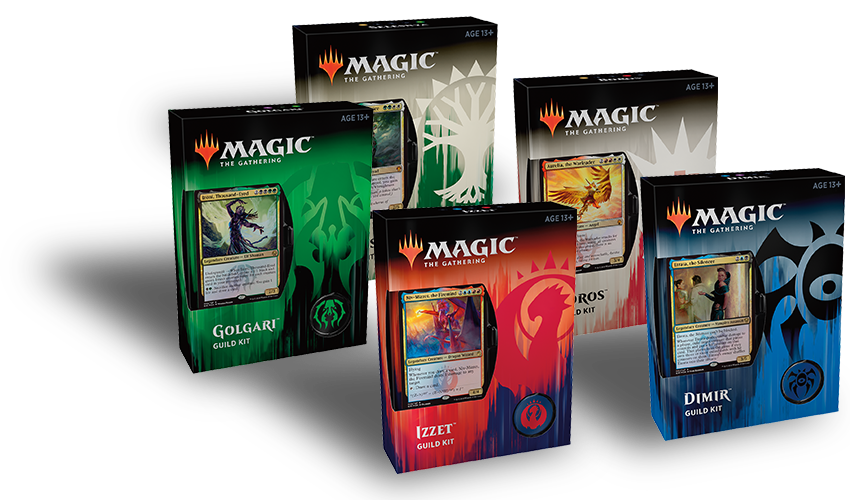 For even more inspiration (and a few decklists) around Guilds of Ravnica commanders, check out some of these creations from the incredible Commander YouTube community:

May your guild always prevail!