This is a summary of the rule changes planned to come to Magic with the release of The Brothers' War. The official rules are still under review at the time of this writing. When they are published, they can be found on our rules page. If there should be a discrepancy between this summary and the official rules, the official rules take precedence.

This new section covers convert, a keyword action found on Transformers double-faced cards. Convert functions the same way as the transform keyword action found on some other cards. Notably, triggered abilities of another card that trigger when a permanent transforms will also trigger when a permanent converts, and if an ability of another card instructs you to transform one of these cards, it will convert even if that ability doesn't use the word "convert." We also updated the wording of several transform rules while we were in the neighborhood, but there are no functional changes to older cards.

This section defines prototype, the keyword ability that lets you cast prototype cards using their secondary characteristics. Notably, casting a spell as a prototype does not count as paying an alternative cost.

This section explains how the living metal mechanic makes Vehicles become artifact creatures during your turn.

This is the entry for the More Than Meets the Eye keyword ability, which allows you to cast some double-faced cards converted.

If you activate a Mimic Vat and it has no cards exiled with it, you don't get to create a token. This seems pretty obvious, but it turns out that it wasn't explicitly stated in the rules; it's a little brain-bendy, but it could have been argued that you get a token that is a copy of nothing. Lest we get too excited about Null Rod's flavor text, we shored the obvious result up with a new rule. Enough brain yoga for one day!

In the last update, this rule explained that name stickers add a single word to a card's name. However, individual name stickers can have more than a single word on them. Hot Dog! No, I'm not excited, that's just the sticker we forgot about when writing the rule. Oops! Now the Hot Dog sticker is correctly covered by the rules.

The offering mechanic previously only specified the subtype of permanents that could be sacrificed. It is now generalized to enable new offering cards to specify any quality, not only subtype. Now Blast-Furnace Hellkite can be offered some tasty artifacts! 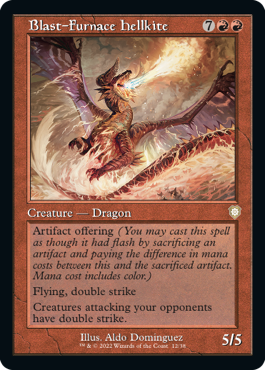 The rules for meld now welcome three new meld pairs, specific pairs of cards whose back faces combine into a single oversized card face. This rule has also been broken up into subrules for ease of reference.