reetings and salutations! Hopefully by now you've gotten a taste of your very own Conflux cards. You've cracked them in packs, traded them with friends, absorbed their flavor, and slung them on tables. Today I will relate to you stories about the makings of your Conflux cards from inside the hallowed halls of Magic R&D.

As a small expansion, Conflux knew its opening act was Shards of Alara. That brings to the table these mechanical themes:

Block design long before had already determined that Conflux's overarching game-play mechanic would be "five-color gold." Additionally, any small set design team must decide two things: how much of the previous set's themes it will carry, and by how much. For Conflux, our answer was "all but less."

The next step was a download from Creative. Mark Rosewater has mentioned this before, but allow me to reiterate the transition from Shards of Alara to Conflux:

In Shards of Alara, due to flavor, there is:

As lead designer of Naya, here's a mechanical chart I composed on our internal wiki: 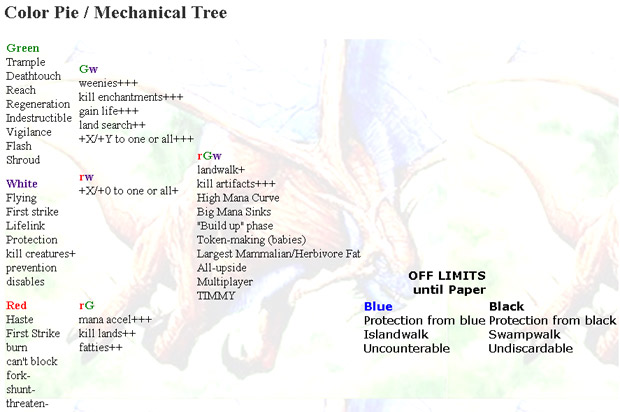 With Conflux, the shards can, for the first time, "see" each other. Naya is beginning to overlay Bant and Jund, for example. That's why Conflux shows Naya vs. Bant conflicts: 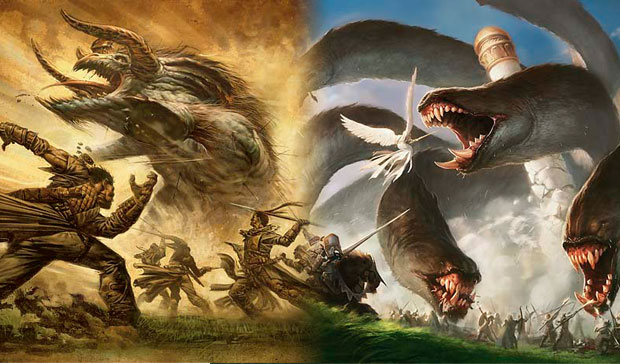 All those "OFF LIMITS" abilities are now fair game for Naya to wage hate-filled war on its new enemies.

The first "layer of hate" is the Outlander cycle:

Each is a CD 2/2 with protection from its shared enemy color ("CD" is R&D jargon for a cost of two colored mana in allied colors). Printed under different names in Invasion, these commons are about as beautifully designed as Magic cards can be. They are hate shock troops; they hit the battlefield early and let their hate out!

Step 2 of Operation Hate is a full uncommon cycle of monocolored cards that hate on their two opposing colors: 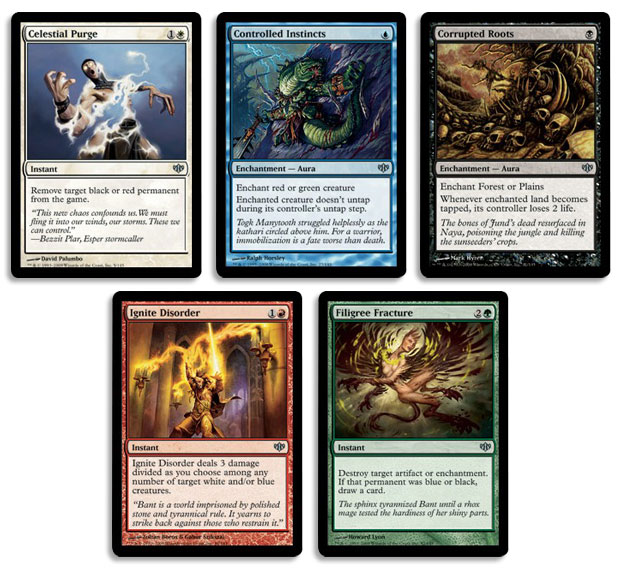 Development likes the effect these kinds of hate cards have on Magic as a whole, as Erik Lauer [has elaborated on]. It's a nice treat designers can throw to grumbly developers.

Additionally, design stuffed even more hate into the set! These hate cards are less obvious, but manifest themselves through game play. See if you can figure out who design was hating in these cards: 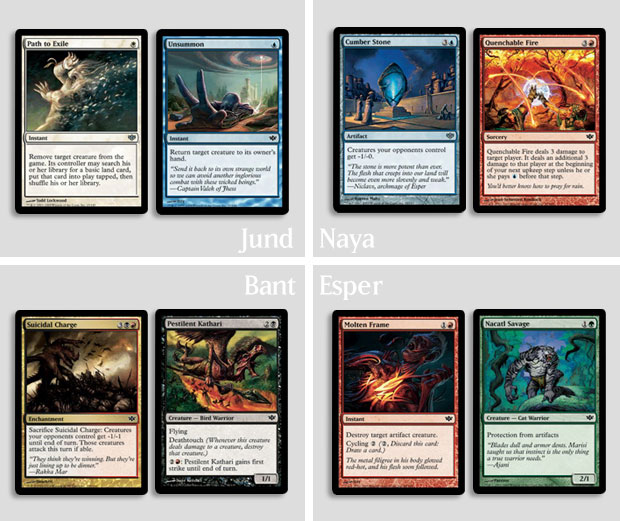 Now, if you've been paying attention, you might notice something slightly out of whack. "Why is a Naya creature that's clearly anti-Esper? I thought Naya is fighting Bant and Jund ...."

Yes, well, design didn't get the memo on exactly which shards were overlapping with which other shards. Not knowing that, the designer instinct is toward Magic's enemy colors like green versus blue. Design inserted and to show Esper and Naya's hate-hate relationship—foreshadowing what will happen if those two shards do overlap ....

An aside: Esper is especially easy to hate on—just wreck on artifacts.

ROBOTS DIE!!
RGW
Sorcery
Destroy all artifacts. CARDNAME deals X damage to target player and you gain X life, where X is the number of artifacts destroyed this way.

Poor Esper! We had to pull back on the vindictive Esper hate.

Part of the craziness of a five-color theme is fitting enough mana-fixing into the set. We found a few different ways to do that.

This at minimum costs (at the mechanic becomes a strange cog for threshold or dredge). Shards of Alara does this, notably on and .

Scourge had good success with its mechanic called "cycling" on . We tried these and discovered we wanted more versatility in a five-color world. We needed more than five common mana-fixing slots, too.

With Domain decided as our five-color mechanic, we invented a new mana-fixing keyword ability and spread it onto some common spells.

This way is pretty sweet because we get away with putting it on a blue card even though we would never print this card in a vacuum:

Blue Wanderer's Twig
1U
Instant
Search your library for a basic land card, reveal it, put it into your hand, then shuffle your library.

I call these cards the "s." We essentially needed to discreetly hide five s in common slots. Putting a on these turns them into colorless instants, and players might miss that for mana-fixing purposes, they should be playing a black card even with no black mana sources in their deck. We liked 1C the best.

Match the playtest name to the printed card name. (Mouse over the names to see the answers!)

I'm oversimplifying the process here, but more artifact and land mana-fixers found their way into the set mostly during development: , , , , and .

Design initially gave each color its own mana-fixing common: the not-all-intended-to-see-print list of , , , , and .

... , which, as Tom LaPille explained on Friday, began life as a 1/1 common that tapped for any color of mana.

The design team knew there would be -costed cards in the set. 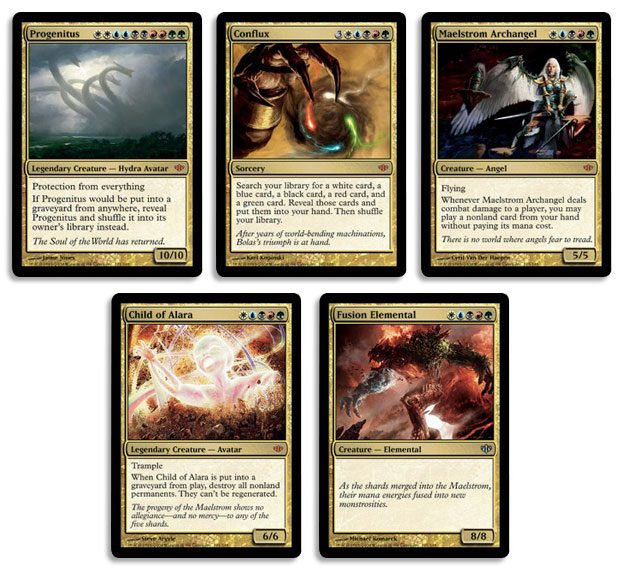 You wouldn't know it, but development was constantly trying to beat up on 's power and toughness.

However, is the apex of mana costs, the zenith of a plan to acquire the power of all colors. It's not "piecemeal" enough to sprinkle throughout the set. We knew we needed five-color cards that weren't defined by sticking in their mana costs, so we went in a few different directions.

The first of these was activations. These are cards that you can play early in a single color to fight for you. Later in the game when you've assembled all five colors, your creature can hulk out by drinking delicious juice.

Meanwhile, a Mark Gottlieb cycle of C-drop CDE and activation enchantments all coalesced into the numerically poetic ultimate Obelisk.

Finally, there's Domain. Mark Rosewater already wrote seventy trillion words about the origin of Domain. I was the #1 supporter of Domain, having played with it back in Invasion, as my single casual deck on my Magic Online account, and all during Conflux-capable FFL. It's budget-friendly, infinitely customizable, castable even in mono-color, scalable with the game time, and most importantly, fun. It even wins money in Extended! We brought back some oldies that were goodies ( and , a functional reprint of Gaea's Might) ...

I would count , , , , and basic landcycling cards as Domain enablers, too.

Wait, We Forgot About Shards of Alara!

The design team made sure to give what card slots we could to exalted, devour, and friends from Shards of Alara. We ended high on unearth on purpose because we knew we were heralding the return of ... 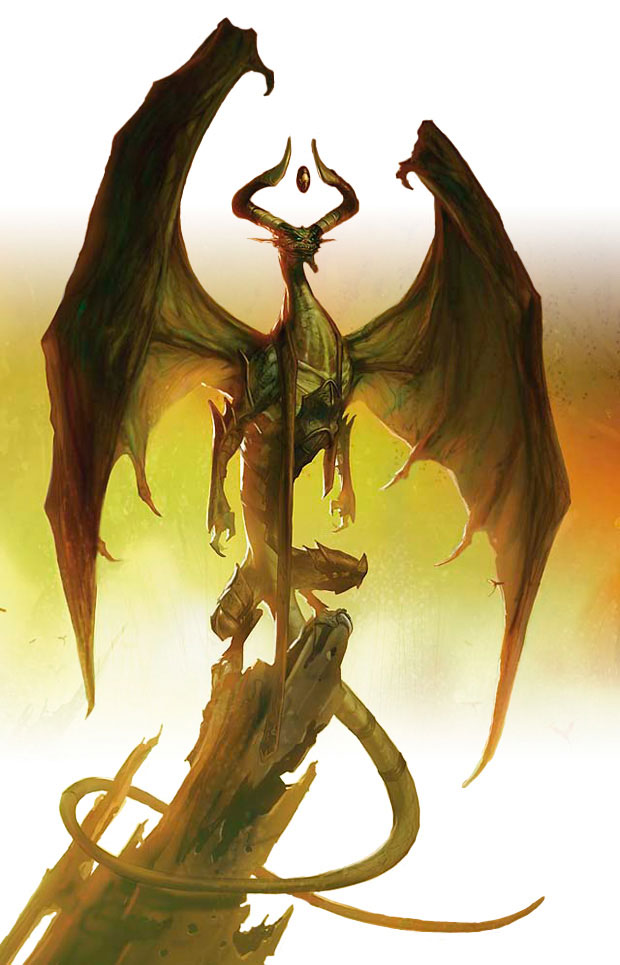 We knew Grixis players were starved from Shards of Alara, with the shard missing its planeswalker and unearth trailing as an unloved mechanic in some eyes. Conflux delivers and high octane to the unearth gas tank.

Devour evolved a bit mechanically with "threshold 1 devour" and "picky eater" bonus (which was actually my original devour design).

Naya's 5-power theme went "explosive X," a mechanic I included in the original Naya design handoff from Shards of Alara that was pushed off until Conflux.

We also explored "colored permanents matter." We did this mechanic as recently as Shadowmoor and Eventide:

Where Shadowmoor and Eventide made blue cards that like blue things, Conflux put the color-matters effect on its ally color card to lean heavier on "gold-matters" than "hybrid-matters." These are sprinkled throughout the set on creatures and instants such as and .

We consider it bonus inter-block synergy, that, for example, loves being near a or a token.

We also did a few off-color activations at common, on cards such as , , and .

Finally, there was a full-blown uncommon cycle of "CE" activations for better upside:

Guess the Conflux Card from its Art Comments Minigame 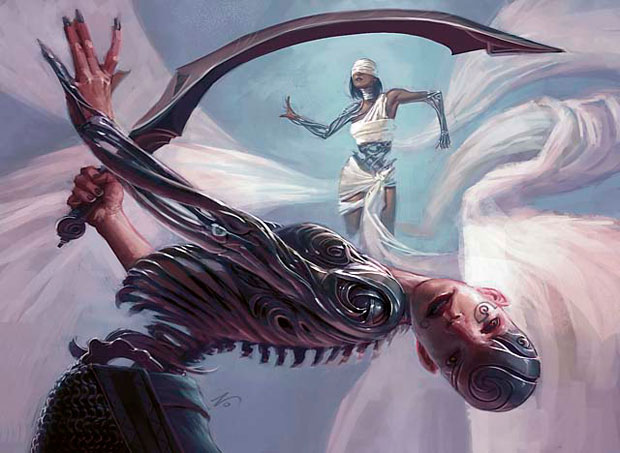 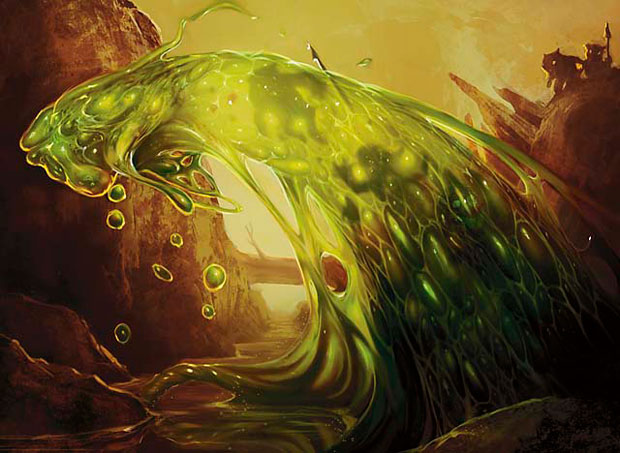 Guess the Conflux Card by its Lonely Templating Comments Minigame

Name was Tectonic Collapse
[Del Laugel] 1/21: "Basic landcycling" will be fun to punctuate.
Del 4/3: That is to say, not really fun at all. There's a reason why says what it does. Is it worth the ickyness, esp. at common?
Del 4/8: I guess we've done legendary landwalk. Requires yet another rule to support cycling.
Del 4/22: could have "Card cycling."
Del 7/25: MLG is okay with writing rules for this mechanic.
Del 7/31: FT fits at a reasonable size.
Del 8/13: MLG's concerns about the name have been passed along to creative.
Del 8/14: Name changed.

Guess the Conflux Card by its R&D Comments Minigame

[MV text]
MT 12/17: Awesome. Maybe cost more and be just opponents.
BR 12/18: All players so you can discard a DoD creature.
KEN 1/2/2008: This guy, the 2/1, and the Tom are my favorite DotD guys.
MP 2/11: Feels reasonably close to the ROC DOTD discard guy. 1B to make them discard 1 more.
BR 2/25: design and development happy with this card.
AF 3/10: If the above comment is supposed to mean "protection from changes," ha. That said, this one is fine.
Del 4/3: New unearth functionality. Only 6 unearth cards in this set.
MT 4/4: 4% of the set is unearth!
DAL 4/11: Fun guy. Might certainly be constructed playable if you have stuff you want to discard.
TML 8/12: I don't think we should spend the name "Zombie Rats" here. We should use that name on a card that is promotable, not one that is isolated by a block mechanic.
KEN 5/9: Strong card. Just a couple of these guarantees putting the game into topdecks mode, and they make topdecking reactive cards worse (, ).
GM 7/2: Can these be zombie rats? would like to play with them.
DB 7/8/08: Zombifying... pending Brady's okay.
Grave Baron 07/08/08: ty

"DoD" and "DotD" are abbreviations for "," the playtest name for unearth. "ROC" is short for "Rock," Shards of Alara's codename.

MT 3/3: Deleted the additional cost. Thinking about moving this to uncommon also.
AF 3/11: What is "the tapped creature?"
KEN 3/12: Retemplated to match similar ROCK cycle.
MT 3/18: Thinking about this as uncommon.
MT 4/7: Did well in casual poll. 9th in set.
DAL 4/11: Rare or uncommon both sound ok.
GTH 4/14: This was [practically] a common in Scourge (Rush of Know, CMC instead) one of my favorites too
Del 4/3: Evaluates the power of the creature as the spell resolves (or uses last known information). Any issues?
MT 4/22: How does the in play template fit in?
Del 4/22: Ignore previous comments. I forgot how Magic works.
KEN 4/22: Often when I cast this, I end up decking myself. Am I doing something wrong...or doing something SO VERY VERY RIGHT?!! :D
sw 7/1: I really love this card, it can backfire if they have instant removal, but still great fun. It can draw a ton of cards though.

KEN 1/14: Costing is too generous here, easily 2R. He grows with the game in two different ways. A pseudo-WUBRG activation.
cf.
AF 3/10: 's brother.
KEN 4/22: This guy hits like a freight train, -ish. The multi-pump is often missed on first glance, but when they take 10 they don't forget!
MT 4/24: Now that 1R 2/1 is going, I think this guy should become a 1R, 0/2.
BR 4/28: Like at 3 toughness for domain. Domain deck needs to work for this card. Opponent should need to use something of value to trade.
AJ 5/8: Pointing out that we have multi-pump power here, and multi-pump toughness (nondomain) at CR02.

CR02 is the card that would later become .