This past week, we hosted part two of our three-part Discord Office Hours series aimed at answering questions directly from the community around the upcoming Commander Legends: Battle for Baldur's Gate set.

For our second Office Hours, we welcomed Wizards of the Coast Game Designer Gavin Verhey and Play Team Senior Operations Manager Scott Larabee to the Magic: The Gathering Discord channel to answer your questions around the Commander format as well as the upcoming set in general. In case you missed the office hours and couldn't join us on Discord, check out the recap below:

Athena: Alright. To start us off Scott, can you tell us a little about the history of Commander as a format?

Over time, the Rules Committee formed the rules as they are currently played today. Fun facts about early Commander rules:

Athena: Thank you! This one is for you, Gavin. Can you tell us about the Commander Legends: Battle for Baldur's Gate Commander decks and how they came to be?

Athena: What is the Commander Rules Committee's role for this set?

Athena: Speaking of drafting, Gavin, can you share what Commander Draft is and how it came to be?

Athena: With the precons, there's now a mythic Background for every color except green. Is there any plan to finish this pseudo-cycle in the future, or is Background unlikely to return in a future set?

Athena: Is this set designed to be drafted 1v1 or as a four-player Commander game?

Athena: Was removing the color-identity requirements for Draft ever a consideration when making the set?

Athena: Do you think cross-pod matches work with Commander Draft?

Athena: Thank you for all this fantastic insight into Commander Draft! Circling back to the Commander deck design, Gavin, can you share how the Commander face cards came to be? Were the existing D&D character legends designed top-down to fit that character, or were they created as bottom-up designs for the set and then assigned a character?

Athena: How do you playtest for Commander in general? With other Constructed formats, you can add four copies and you'll likely see them at least every few games at worst, but that's not quite as easy with Commander's one-of limit and 100-card decks. You might play a dozen games and never see a card in a Commander game. Do you play with smaller, more focused Commander-style decks so you can play the cards more often? Or is there another strategy that you can talk about with how you playtest cards for Commander?

Athena: How were the themes decided for the Commander decks?

That's it in a very quick nutshell—but there's plenty more to it of course. Check out Good Morning Magic for an upcoming video detailing it! Smash that like and subscribe button and uh stuff. Shameless plug. I guess I failed at making each of those just a single sentence. Ah, well. Sorry, English professors.

Athena: Looking more broadly at Commander as a format, how do you feel about "must include" cards?

Athena: Is there a power level cutoff for commander cards? Is there ever a point where you look at a card and decide that it's too broken and needs to be scaled back? If so, were there any instances of this happening in the set? 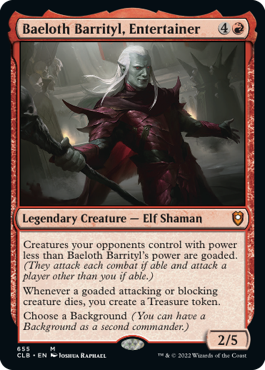 Athena: I've heard opinions that there are too many overly "designed for Commander" cards seeing play in today's environment. How would you address this as a perceived issue and is it possible we could see much more subtle design for Commander in the future?

Athena: Scott, what game space do you hope to see designers delve more into when creating legendary creatures?

Athena: Gavin, back to Commander Legends: Battle for Baldur's Gate how was it decided that Dragons should be a Temur-focused archetype this set?

Athena: Finally, to wrap us up as we all know, the last cut for a Commander deck is always the hardest. What was the last card that you cut from your most recent deck?

Athena: Alrighty, everyone! Our time here is coming to an end. I would like to thank everyone who joined us and submitted questions. And a special thank you to Scott and Gavin for taking the time to talk with us all!