It has been announced that the Japanese version of War of the Spark features 36 pieces of original Japanese art painted by prominent artists.

Among the pieces is the must-see planeswalker Liliana, Dreadhorde General painted by Yoshitaka Amano. Before the release of the set, we had the chance to sit down for a special interview with the artist.

Note: This interview has been translated from the original Japanese and edited for clarity.

Q: How did you approach painting Liliana? What inspired you to decide on the image you went with?

Last year in Kyoto, there was an international conference focusing on manga, anime, and games presided over by Cedric Biscay. Prominent artists and creators around the world gathered at the event, which was originally held in Monaco. I participated in the event, and even had a chance to have a conversation with American comic writer Frank Miller. 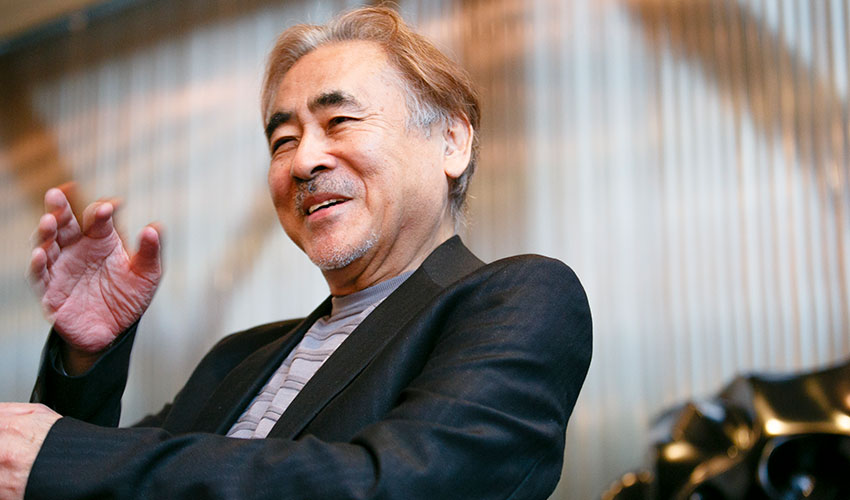 At the event, there was a cosplay show put on by performers from Europe, North America, and South America. I thought it was interesting, so I recorded it with my cell phone. When I was watching at the time, I just thought "Wow, there are lots of kinds of characters throughout the world." Among them, the most amazing performer—the one my eyes fixed upon and left a lasting impression—was none other than a foreign performer dancing and cosplaying as Liliana! I didn't notice when I was watching the show, but when I looked at the materials for the job I was assigned to, I said to myself, "Huh?! I've seen this before!" That encounter in Kyoto really left a lasting impression.

The stage of the theater in Uzumasa was lit up, and the performers danced to music as they appeared. Not only the characters, but the entire atmosphere of the spectacle gave me a strong impression. The foreign performer had been holding something that appeared to be a skull, all the while dancing an alluring yet suspicious dance. I think the performance lasted around 5 minutes. The way she stroked the skull created an entrancing and fascinating atmosphere that I can still remember clearly. That's when I knew my painting needed to have a skull in it.

Q: When painting Liliana, was there anything you struggled with, or aspects that you had trouble with?

Up until now, I haven't had much experience painting characters that others have already painted. Liliana has already been painted by other artists, so there was a certain pressure to that. Incidentally, just as I was thinking to myself about how I can express my own style, that's when I encountered the "real-life person," the cosplayer—and I think that was big. After all, characters themselves exist even if someone has already painted them, so I thought to myself, how can I create my own "difference" through my painting? The paintings by all the Magic: The Gathering illustrators are really wonderful, so I thought, what can I do to give my painting its own style? There are demerits if it's too original, yet if it isn't original enough, it isn't fitting for that character. I cannot express it clearly, but everyone's goal is creating the same thing, and we're all trying to get there in our own way. We're all trying to create the same characters. All the Magic: The Gathering illustrators paint with a straightforward and pure approach, so I wanted to create my painting in the same way. It's not good if you try and make your painting stand out by being too individualistic, so it's best to have an earnest and straightforward approach.

Q: Please tell us what drew you to Liliana, as well as what points you took particular care with when creating the painting.

It's hard to put into words, but Liliana seems to have a perfect balance of regality and down-to-earthness, at least that's how I feel. No matter what world you went to, Liliana would fit in—wouldn't you agree? Whatever world you go to, there's someone like her, isn't there? That's the sense I had—a sort of universal feeling. Also, I felt that she had the air of a '50s or '60s Hollywood actress, and that there was a dignified sense to her. I wanted to depict that her very existence was "self-important," and create a feeling that she was dominating over something. I also happen to like the major American actresses from the '50s and '60s. When I went to Los Angeles recently, I bought some collections of photos and pictures from that era and went to a lot of book stores when I visited Oregon last fall. I also like the gorgeous atmosphere of black and white movies, so I prefer older movies rather than recent ones. Just like those famous actresses, I feel that Liliana also has an air of sophistication. 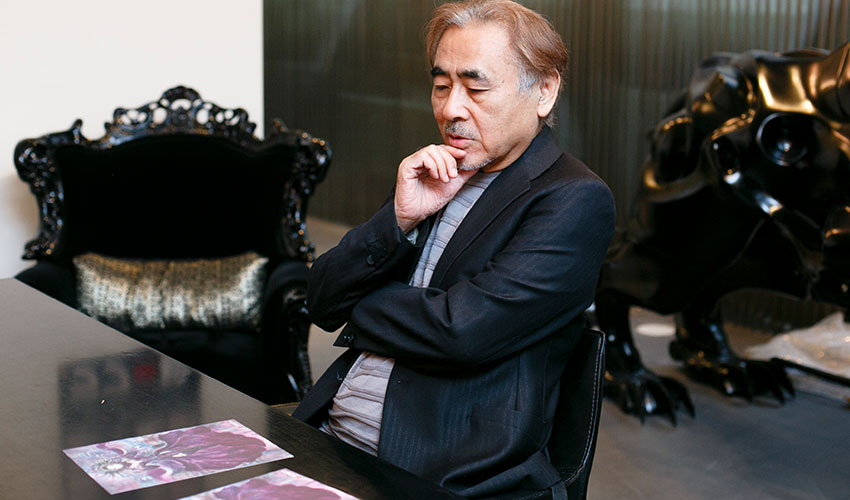 To a certain extent, that's why I decided to be particular about how much of Liliana's skin I would expose for this painting. As you can see, Liliana's not exposing very much skin, is she? Only her face and upper torso are exposed, so I had to decide how I would depict them. People also have their own different ways of painting tattoos. I remember thinking, how would it look if I put in a lot? The first thing I painted was her face, and I was considering putting tattoos on her face as well, but decided it would be a bit too much. As I was painting, I thought about how I could expose her skin in a way that was attractive, and also about how I could make here alluring.

Q: Tell us why you decided to participate in the project to create original Japanese art, as well as your overall impression of Magic: The Gathering.

Of course, even before accepting this job, I knew about Magic: The Gathering, and that it was the most famous American card game in the world. Right now, it is considered the pioneer for card games worldwide. There are over 20 million players worldwide, which is amazing. I felt I couldn't afford to come up with a bad painting (laughs)Because I know that paintings end up becoming cards, and I've had experience making them for [other games], it was an honor to paint for the card game that has the most history, and that is loved all over the world.

There's a variety of fantasy worlds, and I feel the one that sets the bar for all of them all over the world is the originator—Magic: The Gathering. The card game that started it all. In that sense, I feel that it sets the bar. It's common knowledge to everyone in America.

Q: Do you have a message for all of the players around the world who enjoy Magic: The Gathering?

I feel that this Liliana painting has a feeling of "I rule this world," or "I dominate," almost as if she is starring in a solo stage performance, without need for anyone else.

I wanted to depict that level of strength and overall presence in my painting. Also, to the fans who use this card when they play the game, I want them to feel that she is in control of this world and that she won't lose to anyonePlease, by all means, rule the world together with Liliana. 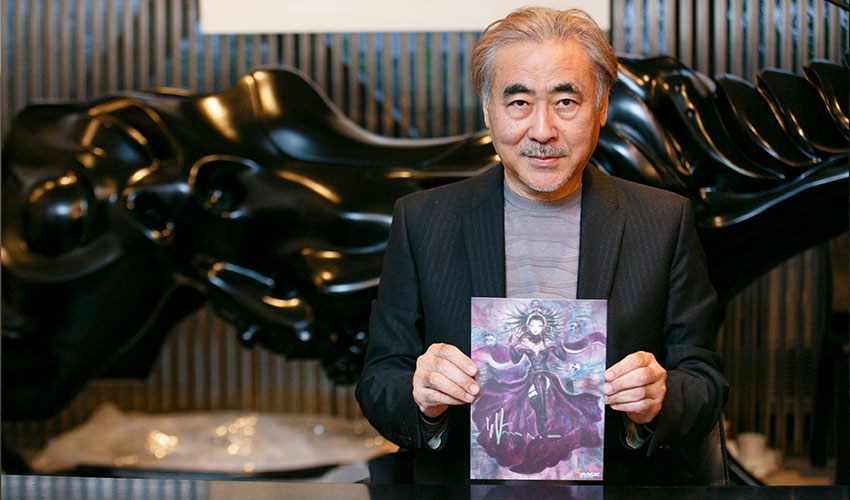