It's going to be an epic year for Magic: The Gathering Arena, and it all begins next week with our January game update. We're bringing you a new card set, new features, a new way for you to download and play.

(Yes, those are Nyx basic lands! They won't be available with this release, but we'll have more information on how you can obtain these lands and other showcase card styles in a future update.)

Theros Beyond Death also heralds the return of Sagas, devotion, and constellation to Standard play, as well as the addition of the new keyword escape. Once again, Matt Tabak serves as our idyllic tutor for explaining both the old and the new in our Theros Beyond Death mechanics article.

In MTG Arena, constellation, devotion, and escape will each feature their own badge and brief explanation text on how the mechanic works for quick reference in-game. 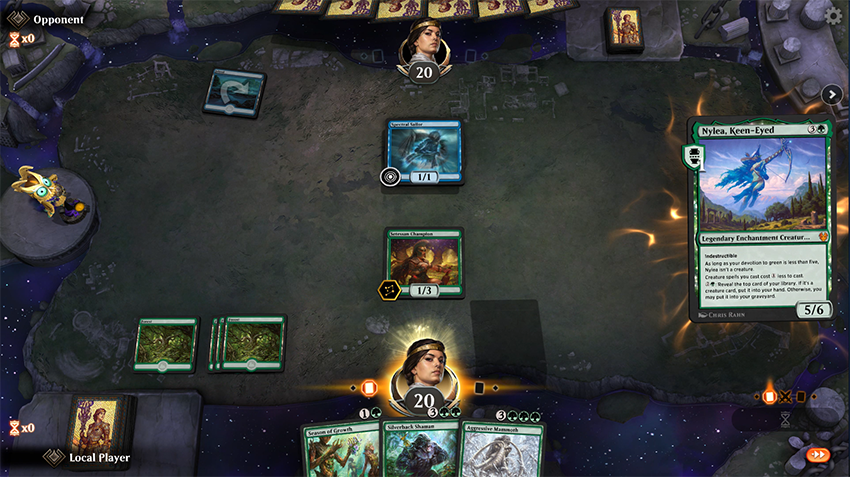 We're also happy to announce that with the January 16 release, we will be officially launching on the Epic Games Store!

For our established players, you'll still be able to download and play as you have been—playing through the Epic Games Store is optional, not a requirement. You'll also share play queues with players regardless of where you play, so you're welcome to choose your preferred platform.

We'll have more information and a complete FAQ as we get closer to next Thursday.

For those you eagerly awaiting to open those Theros Beyond Death boosters that have been sitting in your collection since The Game Awards, another new feature we're happy to announce is the addition of "First" and "New" tags when opening booster packs and viewing your collection.

When opening booster packs, the first time you receive a card for your collection it will be emblazoned with the (you guessed it) "First" tag: 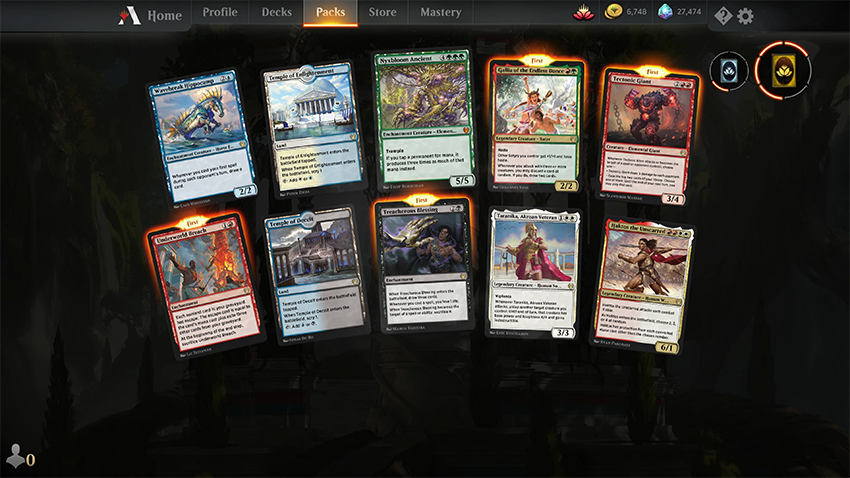 When viewing your collection, all cards that were recently added will also appear with the aptly named New tag. This will include any new card to your collection, and not just the first copy—though you will not see a New tag for copies you receive beyond a playset. The pips above each card will showcase which copy of the playset was added, including if you recently opened more than one (such as with Plummet): 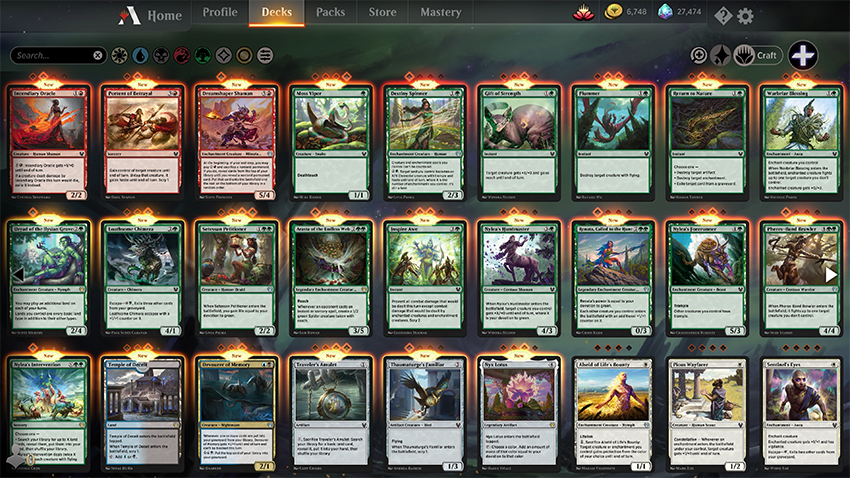 As you can also see, cards flagged as being new to your collection will automatically be sorted first when viewing your collection, and mousing over the card will dismiss the tag.

Please note that these tags will not appear while you are drafting—and no, ducking out to view your cards before finishing your draft doesn't work either. These tags will only appear once you've reached the deckbuilding portion of your Limited events.

To Favorite a deck, select the deck you wish to give a shiny little star to and click the Favorite button located at the bottom of the screen, next to the other deck options. Voila! Your deck will receive a golden badge of honor and will appear first in your collection.

Favoriting decks can be used alongside other filtering options as well. For example, if you sort by alphabetical, your favorite decks will be sorted alphabetically, followed by the rest of the decks in your collection (also in alphabetical order, of course): 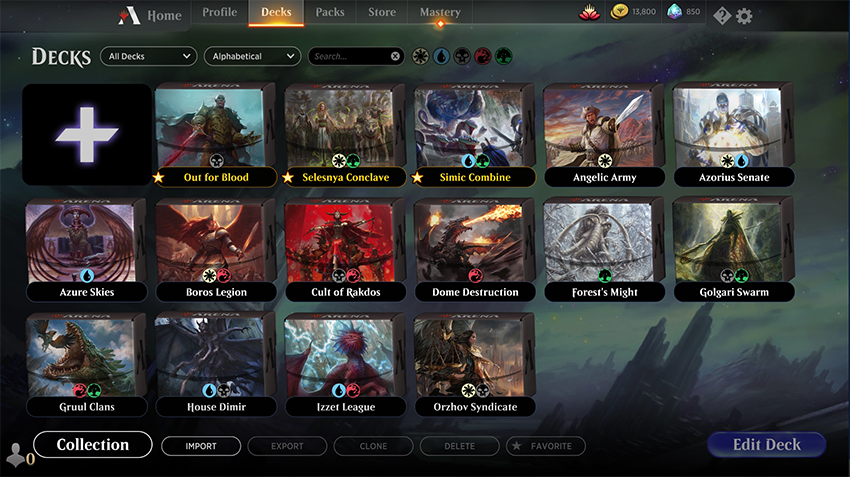 Last Played will sort all your decks based on how recently the deck has been played, starting with the most recent and going backwards from there.

With the Historic ranked queue temporarily coming to an end with Theros Beyond Death, we'll be adding two new events for Historic play—Historic Constructed and Traditional Historic Constructed as another way for you to play with your decks until Historic Ranked returns. For those of you who are familiar with our Standard events, the Historic version will follow the same game records, cost of entry, and prize structure. And just like with Throne of Eldraine, Historic Ranked will return as we get closer to the release of Ikoria: Lair of Behemoths.

Also, don't forget—the Historic Challenge is this weekend! This Constructed Best-of-Three event will feature a high entry fee—and prizes to match. Full details are available in our previous State of the Game.

We ran Brawlidays last update as an experiment, and we found that over half of the players who regularly play Brawl engaged with the event. We consider this as a strong success for our intended audience, and so we're excited to bring this back for the January update. This month's event will run from the launch of the January update until the February update (currently planned for February 14), be available for 10,000 gold, and features Talrand, Sky Summoner as the reward for the first win.

We've also seen a noticeable uptick in the number of people playing Brawl in Direct Challenge and Friends Challenge. It's cool to see more community-run tools making it easier for players to find each other. And we're going to spend a lot of our efforts this year increasing the social ability of playing with friends in-game. That starts with Friends Messaging, hitting in the next few months.

The Legend of Arena

And to think, escaping from the Underworld is how we decided to start our year. There's still a long journey ahead of us, so let's take a look at our updated roadmap to help guide our way. 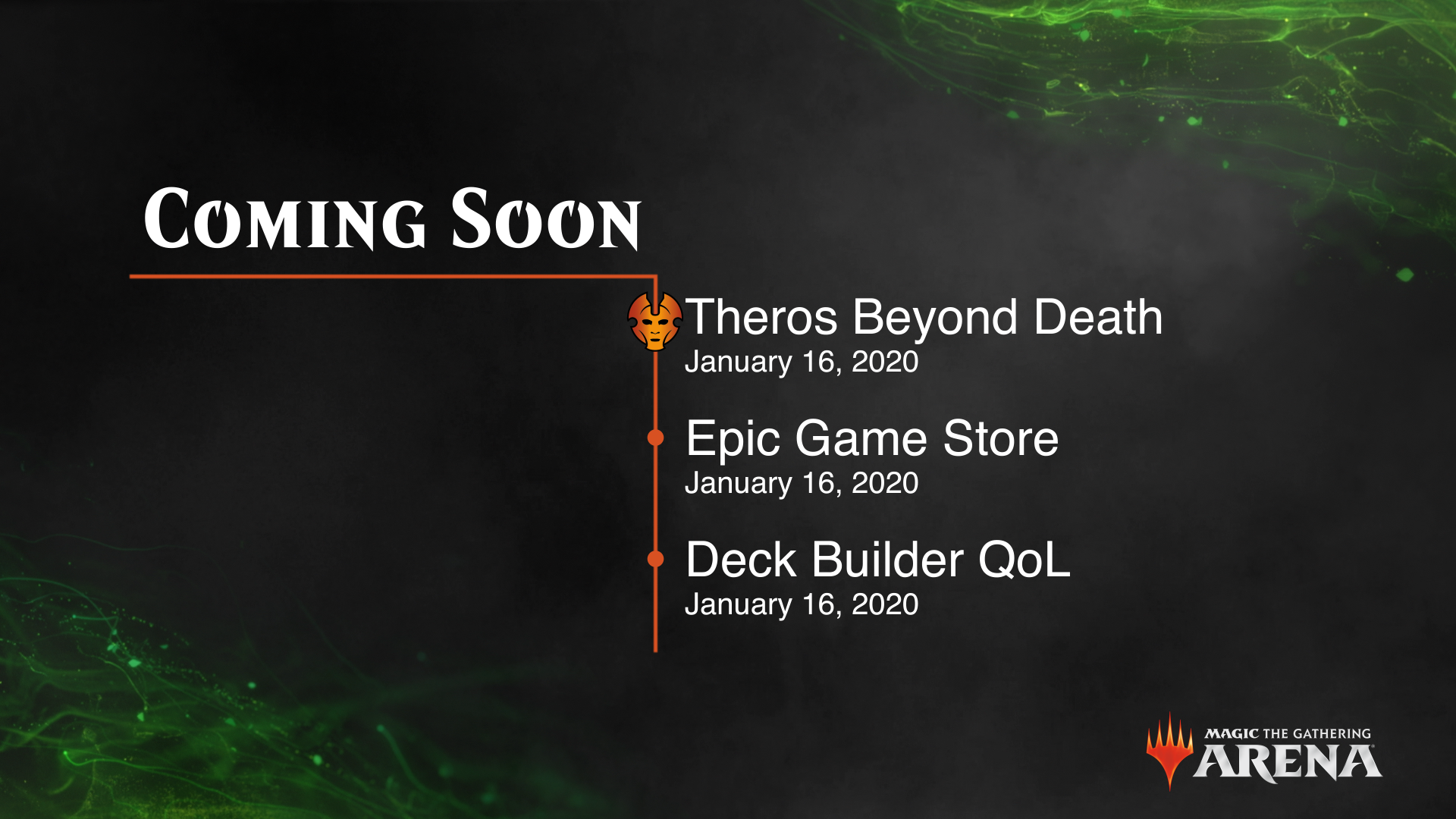 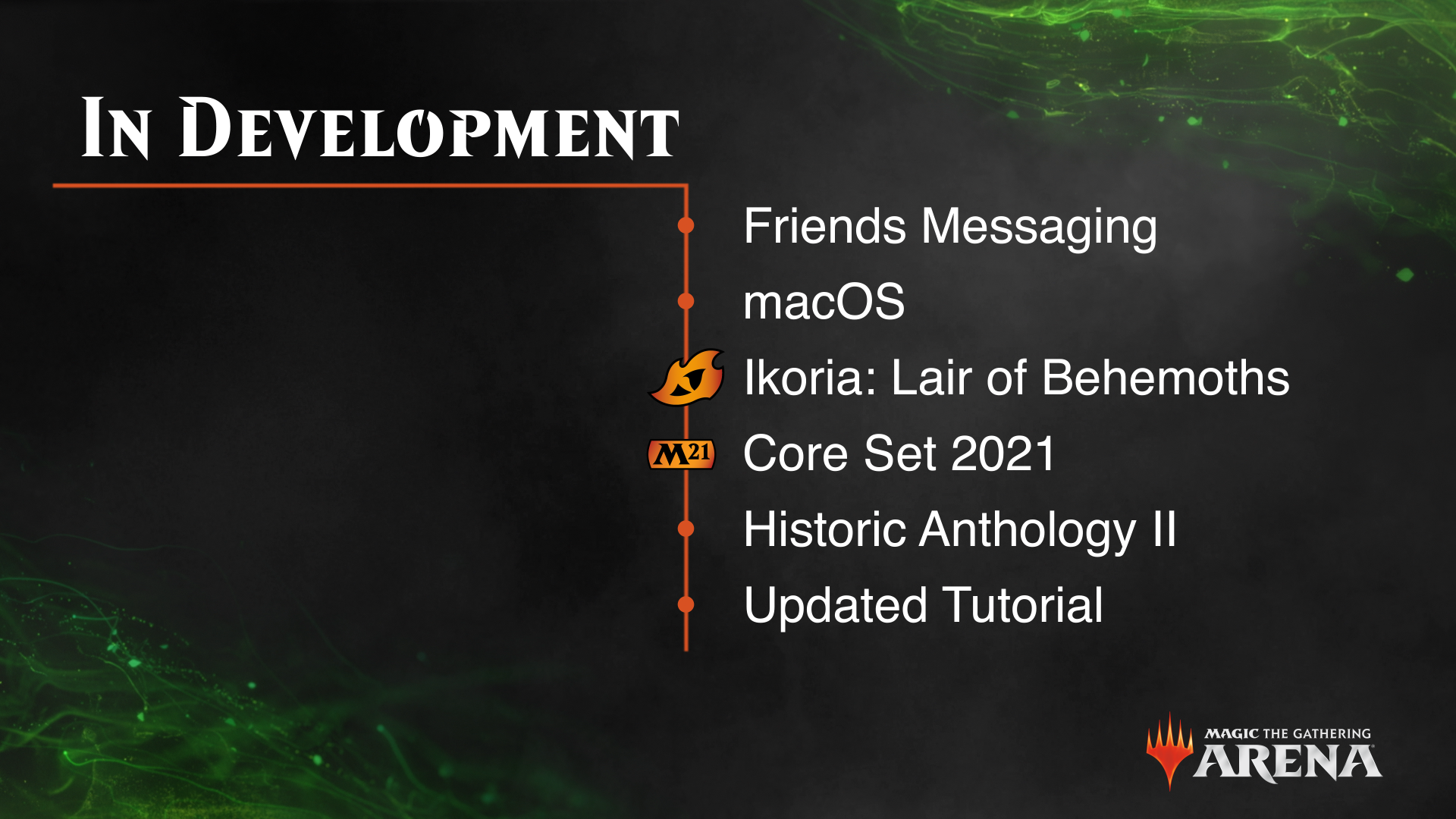 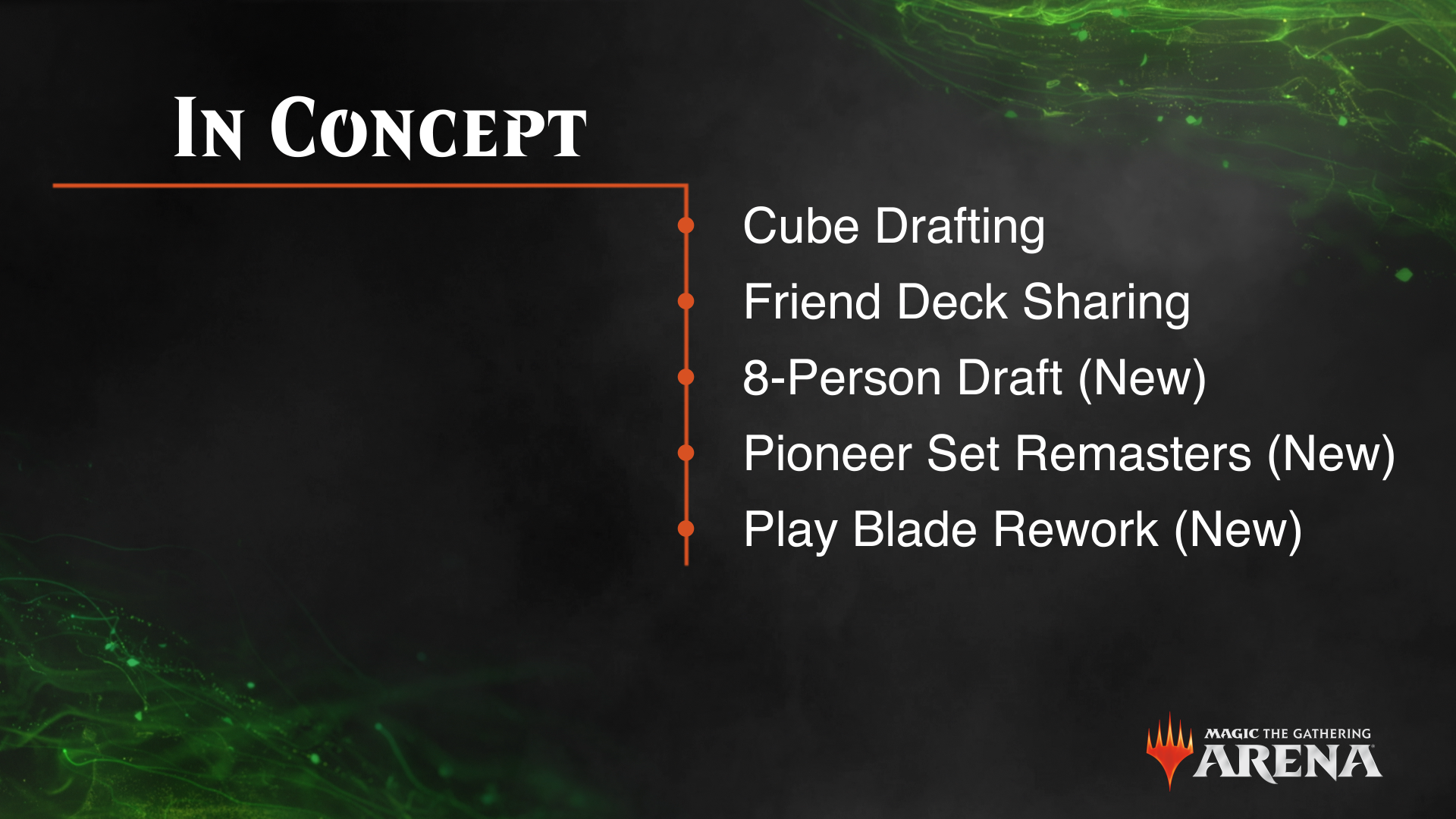 We want to give a special callout to Friends Messaging, which will allow you to directly message your friends in games. This is the next major feature to our social functionality that players should expect, and while we don't have an exact date yet, you should expect it sooner rather than later.

We're also working on an updated tutorial system, one designed to help newer players (or old players who are rediscovering Magic through MTG Arena) better understand both the way certain deck archetypes and colors play, or why they may have lost certain practice or tutorial games.

With Theros Beyond Death coming soon, Core Set 2021 has now joined Ikoria: Lair of Behemoths in active development. Work continues on our social features, and our goal is to implement direct messaging in-game within the next few months. We've also clarified "Historic Cards" to "Historic Anthology II" now that you have an idea of what that means, and we've dropped "New Event Types" in favor of more specific callouts—such as eight-person (pod) drafting, which is a feature that we're officially adding to the In Concept stage as it's currently being scoped out in preparation for development.

We've also added Pioneer Set Remasters onto the in-concept list, which will include the Amonkhet remaster, as well the additional sets we're working in conjunction with Magic R&D to help bring the most relevant Pioneer cards to MTG Arena. And as we continue to expand the available formats and ways to play, we've started to concept out a rework to our play blade to make organizing and finding these events easier.

As with our last roadmap update, this is only the start of what we plan to bring to MTG Arena—this year.