This article was originally printed in Duelist #34

ver wanted to challenge yourself to a Magic duel? Here's how! All you need is a deck (either a deck you use all the time or a sealed deck), the rules below, and a slightly different way of approaching the game. Solitaire Magic won't improve your timing skills or the menacing glare that intimidates opponents. It will, however, improve your card memory skills, including your ability to estimate how likely you are to draw a card based on how many cards you've seen.

Setting Up the Table

Take your deck, shuffle, and deal out seven traditional solitaire stacks - the first has one card, the second two, and so on. As long as a stack contains any cards, the top one is always turned face up. The remaining cards are your deck. You start with no hand and an empty graveyard. There are no life totals, so don't worry about that. The goal of the game is to eliminate all the cards in these seven stacks before cycling through your deck three times. 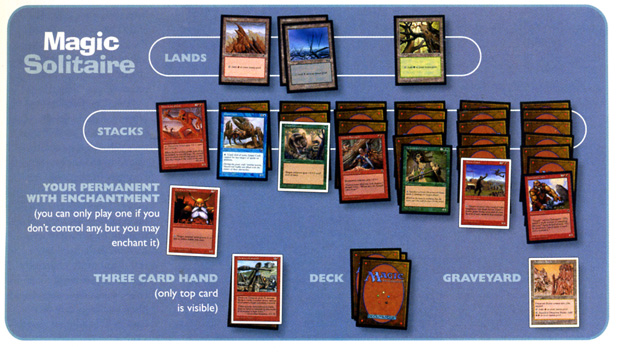 Lands must be moved up above the stacks, where the aces would go in standard solitaire. Each different land type is placed in its own pile. If more than one copy of a card is ever face up or in your hand, move it to a stack with that card on top. In other words, if two stacks both have Hurloon Minotaurs on top, you must move one Minotaur on top of the other one.

The Seven Stacks (And How to Get Rid of Them)

The cards on top of each stack have many uses. If the card is a permanent, it's considered in play, unless it's a local enchantment. If there's more than one card face up on a stack (which could happen if you've drawn multiple copies of a card), all those cards are in play. For the purposes of card text, you don't control any of these cards. However, you may play these cards by paying their costs as described below. A card on top of a stack may be targeted as if it were in play, in a player's hand, or even as if it were being cast. For example, Æther Flash is on top of a stack, and you'd like to get rid of it. You could play Disenchant, Power Sink, or Duress - from your hand or from another stack. Because those cards could target Æther Flash either in play, while being cast, or in hand, you could use any of them to remove it from that stack. Creatures on the stacks can also be destroyed in combat. In Solitaire Magic, attacks are declared against a stack, not a player. The Magic creature-combat rules apply. Your creature is considered to be attacking, and all the creatures in the pile are considered to be blocking. Since there are no turns, creatures do not suffer from summoning sickness. Remember, this will usually just be one creature - unless you're facing a stack of identical creatures like the Hurloon Minotaurs above.

Instead of playing lands and tapping them for mana, you sacrifice lands to generate mana (and the sacrificed lands go from the top row to the graveyard). In order to play a card or an ability, you must sacrifice a land that produces at least one colored mana of the card you're playing. All other costs are ignored. If a source provides more than one mana, the extra is lost. For instance, sacrificing a swamp to play Dark Ritual will only allow you to play one spell or ability requiring at least

. If a spell or ability has

in its cost, X is 1, plus 1 for each additional land you sacrifice or mana source you play.

Three Trips through the Library

As in normal Magic, you draw cards from your library. But in Solitaire, you draw three at a time and look only at the top one. Also, you don't lose the first time you've drawn all your cards. Instead, you can go through the deck three times before you lose. Place the cards you've gone through into a discard pile. When your library is empty, the discard pile becomes the library (unless you've gone through the library three times already). Library-searching effects can still be played. Harrow, for example, would allow you to search your library for two basic lands and put them into play. In this case, the lands would go directly into the appropriate land stacks above the seven stacks.

One Permanent at a Time

You can never control more than one permanent, except for local enchantments. Play that permanent below your seven stacks. Whenever you use a permanent's ability - or attack with it if it's a creature - you sacrifice it when the action is completed. You may use abilities that play as fast effects multiple times before sacrificing the permanent, such as Knight of Dusk's "

: Destroy target creature blocking Knight of Dusk." You can play a local enchantment on that permanent (or several enchantments), and any enchantments get sacrificed when the creature does.

Your Hand - A Precious Resource 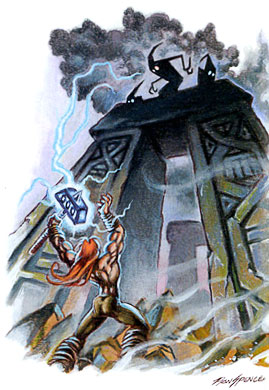 Aim for the Graveyard

This works the same as the Magic graveyard. All destroyed cards are placed in the graveyard, including lands sacrificed to pay for spells and abilities. Remember, your goal is to eliminate the seven stacks, so you want to put a lot of cards in the graveyard.

The Rest of the Rules

Because there are no turns, anything that happens at the beginning or end of any phase is ignored. Abilities that are played during a phase can be used at any time. As always, once you use an ability, the permanent is sacrificed. Since there are no life totals, damage is of no consequence to you, though it still gets rid of creatures. If an ability requires you to pay life, you must discard a card from your library for each life you wish to pay.