"There's no such thing as a fair fight."

he artificer had been at work for thirty hours straight, and she was exhausted. This wasn't the longest stretch she had worked on a project, not by half. But those projects had been driven by the muse, by love, or by inspiration. Those had been works of joy. Joy fills the soul during times like those. There was no joy in this work. A dozen different timepieces of varying size and make all ticked away, counting down the hours to her execution.

She didn't have the power for a spell like this, so she had to cheat. The first step was the amplification circle: Five feet in diameter, silver filigree etched in fresh black marble. More than six hundred unique runes in the outermost circle, then seven smaller rune circles, perfectly concentric, detailing the precise time, location, and energy level of the spell that would target it. It would need to be flawless. If it worked, it would allow her to pull off a feat of magic that even her old mentor would have hesitated to try. Otherwise, the spell would fail in one of an infinite number of spectacular ways. Almost none of those ways involved her walking away. 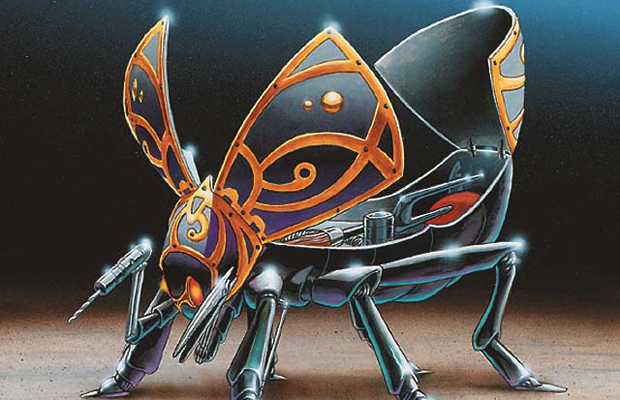 A small insect-like construct brought her a new chisel, fresh plates of silver inlay, and a glass of cold water. She grabbed a rag, wiped her hands and forehead, and pushed a lock of auburn hair out of her eyes. She had seven hours before she needed to be back in her cell, and she was nowhere near done.

The artificer stared at the spell circle. She squinted. Her eyes burned, dry from too much detail work and not nearly enough sleep. She saw no flaws, but this was worth checking a second time. And a third. She gave it a satisfied nod before turning to her workbench.

There sat a small crystal sphere with an orange light swirling inside. She took a deep breath and picked it up very carefully. With slow, deliberate steps, she walked it over to the spell circle, and set it down very slowly. It made a small "tink" sound as she let go, and she winced... a long second passed, and she slowly exhaled. She backed away from the sphere and wiped her forehead again. With a mischievous smile, she took a piece of paper from her desk, jotted a quick note on it, and then placed it next to the sphere. Two steps down. Now the hard part. 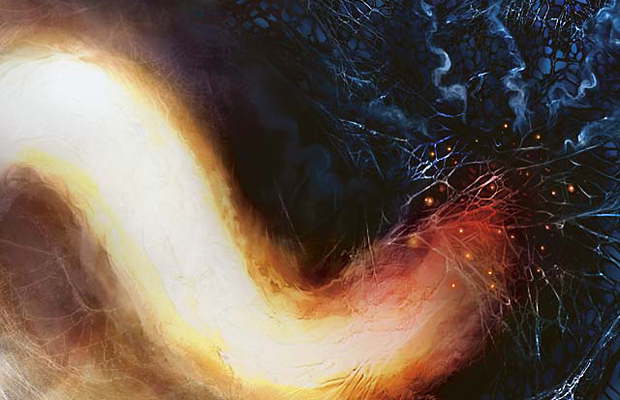 Channeling this much energy hurt. The room was filled with an unearthly blue light—the artificer had conjured an opaque magical dome of force, nearly as tall as she was, that completely covered the spell circle. Her face was locked into a pained grimace, her teeth grinding from the effort, as she put everything she had into creating a perfect barrier. She didn't have any shortcuts for this bit of magic; she just poured everything in her mind and heart and soul into the dome, and held absolutely nothing back. She wanted to stop. She needed to stop. But the part of her that had been hammered into steel through decades of tireless work knew something else—she knew that she needed to hold the spell for a few more seconds. Seconds that trickled by like hours. That crept like days. She was screaming now, but she couldn't hear herself.

The spell came to an end with an explosion. It sent her flying across the room, skipping off the top of her cluttered workbench, and smashing into a bookshelf. Countless gizmos and half-finished projects were smashed, dozens of beakers shattered, and sheaves of paper were launched into the air. The spell circle, and everything it contained, had been completely annihilated by the device. 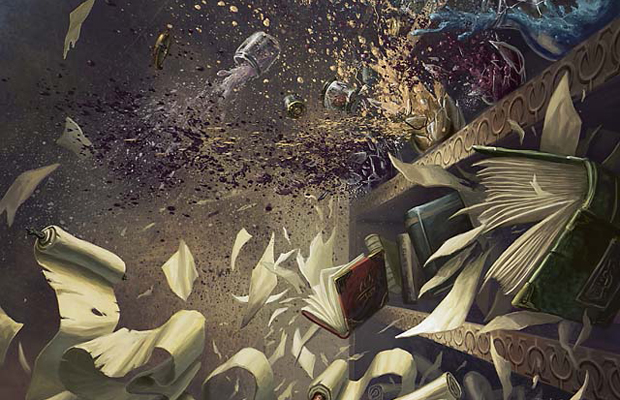 As the papers fluttered to the ground, the room was filled with the ringing sound of a young woman, flat on her back, bruised and aching, laughing at the top of her lungs.

The artificer was shaken awake by one of her traveling companions—a merchant who had been captured along with her a week before. Unlike her, he didn't have the good fortune of being able to transport himself away to safety. So when she found out these barbarians were planning on killing her and her companions as part of some crazy solstice ritual, she briefly considered just teleporting away and leaving them to their fate. Briefly. But then she learned that she'd be allowed to fight, champion against champion, as part of the ceremony. That sounded like fun, and abandoning these poor people to their deaths did not.

A ritually painted and fur-clad man with arms as big around as the artificer's waist glared at her through the bars of her cell. He knew she was a mage, but she had been careful not to cast any spells that would draw attention during her supposed "captivity." She had been transporting herself to and from her laboratory fairly freely at night, but if they had noticed, they hadn't given any sign.

The man grunted, opened the cage door, and gestured for the artificer to follow. The camp was clearly prepared for a day of celebration. The rough tents all had some kind of ribbon or ornamentation, and a ring of barricades had been assembled for the contest. If she didn't know the purpose of all of this was to be bloody ritual combat, followed by a series of murderous sacrifices to a sun god, she would have thought the display quite festive. The sun was bright in a perfectly clear sky. She couldn't have asked for a nicer day. She was led to a small pen at the edge of the ring. Her guard grunted and gestured for her to wait. She did.

The tribe started to gather around the contest ring, and the barbarian champion was already being prepared by the tribe's shaman and his acolytes. Even from across the field, the artificer could feel the immense power they were wielding. Whether learned in the academy or some stinking mud hut, power was power. Too many at the academy thought that when you bind power in a book, you gain a monopoly over it. Too few of them remained to regret that line of thinking.

The assembled crowd started to chant their champion's name, a young warrior who looked to be in the prime of his life—tall, lean, muscled, and unscarred, with thick dark hair in a loose braid down his back. 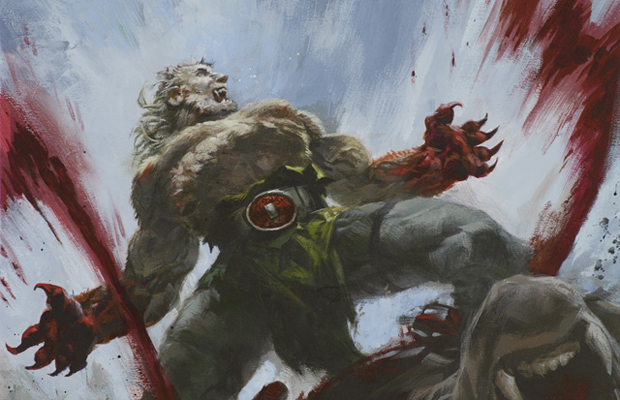 The shamans concluded their ritual and raised their arms for silence. It was somewhat disquieting just how quickly the tribe went perfectly still. To the artificer's ears, the shaman sounded like any other charlatan preacher—a deep, booming voice with a little edge of menace in his tone to keep the crowd in line.

A roar came up from the crowd, right on cue, then quickly subsided.

Another cry from the crowd.

At this, two men entered the ring, one with what looked to be small tree trunk, and the other a metal bucket.

"On this day, our strength can withstand any blow!" The man with the tree trunk swung it like a club, and it shattered into splinters when it struck Grell. The crowd roared.

"On this day, our will can withstand any flames!" The man with the bucket threw its contents over Grell—oil—that burst into flames. Grell stood, wreathed in the fire, unmarred. The crowd gasped, then screamed its awed approval.

"Son of the tribe, while the light of the longest day shines upon your skin, you are INVINCIBLE!"

The artificer swallowed hard. She had been prepared for all this, researched it all as soon as she understood what was planned for the captives, but facing off against an invincible foe was unsettling, despite her precautions. The shaman turned his eyes on her.

"You there, challenger of the outlands? I am told you are a great warrior among your people!"

A chuckle rippled through the crowd.

"Not nearly as great as some." There was a note of sadness in her voice.

"And you willingly take on the fates of the outlanders under your protection? Your fate shall be theirs?"

"Let's just get this over with."

A variety of weapons were brought forth for her to choose from. She took a small dagger from the rack and strode out into the middle of the ring. Grell had been handed a pair of small stone axes. Drums started to roar, and the crowd followed suit.

Grell's face was a manic grin. The artificer had no idea how much energy was being channeled through the man, but it was a lot, and chances were he was feeling good. With a well-practiced gesture, she sent two bolts of flame streaking toward him, and in a shower of embers, they spattered across his chest. He was unharmed, of course. Grell raised his arms in triumph to the crowd. The artificer gritted her teeth.

She rushed at him, dagger in a reverse grip. She slashed at his face, and Grell jumped back. The instinct to get out of the blade's path was still there, even though he knew she couldn't hurt him. He leapt at her, taking careful, powerful swings with the axes, but the artificer rolled deftly out of the way.

As she rolled through the dust, she palmed a small object from her belt. When he charged at her again, she tossed it at him—a tiny construct, shaped like an ant, with a reservoir of a glowing cyan liquid in its abdomen. It sprang to life, and latched unnoticed on to Grell's loincloth, providing the anchor for the artificer's next spell. 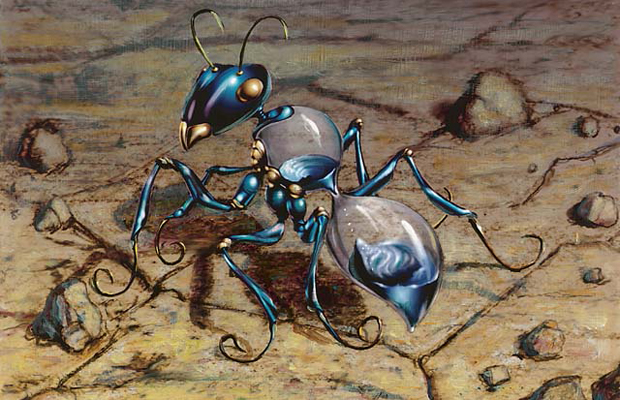 She managed to duck under Grell's next swing, but his massive forearm caught her across the chest on the backswing—the force of it lifted her off the ground. She hit the ground hard, and pulled herself up to one knee. Grell raised his arms again in triumph, taking in the adulation of the crowd before delivering the intended killing blow, when the artificer whispered the word of power that released all of her prepared magic.

"Let's see if this worked."

There was a slight pop, and Grell vanished from sight.

Grell blinked. There air was cold here, and it tasted wrong. He found himself trapped inside an opaque magical dome of force, glowing with blue swirls of arcane energy. On the ground was a small glowing sphere and a handwritten note. He pounded his fists against the barrier, but it absorbed his strikes without making a sound. The glowing sphere was brightening, and the orange light inside looked increasingly... unstable. It began to emit a high-pitched hum, and it started to shake. Frantic, he looked at the note.

The solstice is tomorrow. I win.
—Jhoira 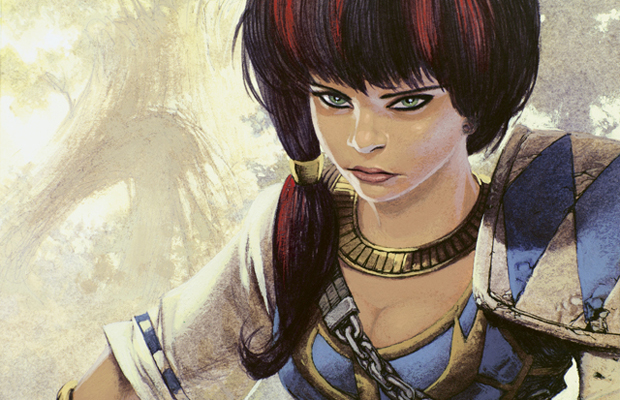 Jhoira of the Ghitu | Art by Kev Walker