Rise of the Eldrazi Mechanics

The perils facing adventurers on the plane of Zendikar have taken a deadly turn. Previous quests have been for treasure and glory, but now only one goal remains: survival. The colossal Eldrazi, soulless ravagers of the Æther, have awakened from their slumber deep within Zendikar's core. Only those who can command the Eldrazi—or escape them—stand a chance.

A New Kind of Magic

Hailing from the Blind Eternities, the space between planes, the Eldrazi have transcended the colors of mana as we know them. As a result, the Eldrazi progenitors themselves and those closest to them are colorless. But don't let the mana cost fool you—these Eldrazi are not artifacts. The Rise of the Eldrazi set also marks the debut of colorless instants and sorceries. Like their Eldrazi creators, these versatile spells can be put into almost any deck.

You may already have seen one of the three legendary Eldrazi titans over in the Visual Spoiler. Let's take a look at one of their "lesser" minions: 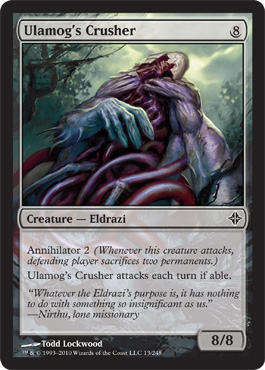 The new annihilator keyword is found on colorless Eldrazi creatures. It's a triggered ability that causes the defending player to sacrifice some number of permanents when the creature with annihilator attacks, before they even get the chance to block it. Ulamog's Crusher has annihilator 2, so whenever it attacks, the defending player has to sacrifice two permanents. It also "forces" you to attack with it ... as if you weren't planning on doing that anyway!

As you'd imagine, creatures as big as the colorless Eldrazi—and they're all really, really big—tend toward the expensive. Believe it or not, Ulamog's Crusher is actually one of the cheaper ones! Fortunately, when it comes to paying for them, they're going to have some help from the rest of their brood.

Below the colorless Eldrazi on the food chain are smaller Eldrazi Drones that are aligned with colored mana. Many of these Eldrazi Drones, as well as some spells, produce Eldrazi Spawn creature tokens. These 0/1 colorless creatures can be sacrificed to add to your mana pool—perfect for casting those enormous Eldrazi.

Here's one such Eldrazi Drone: 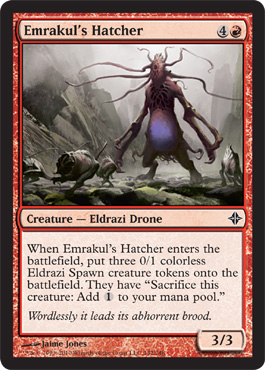 And here's one of the Eldrazi Spawn tokens it and its brethren create: 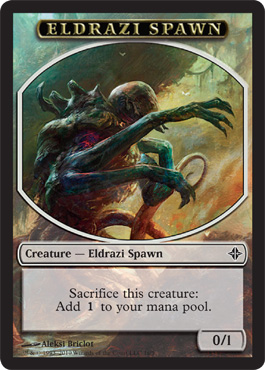 With the Eldrazi threatening the entire plane, the denizens of Zendikar have stepped up to the challenge with their own new kinds of magic—level up, rebound, and totem armor—as well as a strong subtheme of creatures with defender. 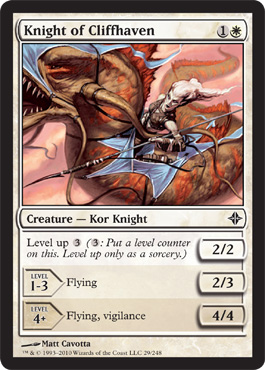 Let's take a look at Knight of Cliffhaven, which enters the battlefield as a simple 2/2 Kor Knight for two mana. Like all level up creatures, it starts with no level up counters on it at all—it's "level 0," you might say—and so it doesn't have any of the abilities, or the power and toughness, associated with higher levels. As soon as you've paid its level up cost of once, which you can do any time you could cast a sorcery, Knight of Cliffhaven is level 1, which means it's "leveled up" into a 2/3 flyer. And if you can get it up to level 4, this little common becomes a potent threat.

Now let's take a look at another level up creature: 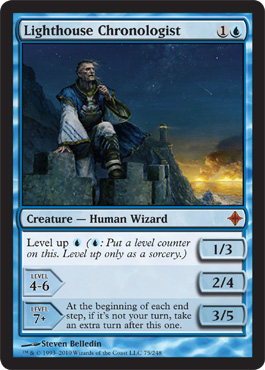 Unlike Knight of Cliffhaven, Lighthouse Chronologist doesn't do anything special at level 1, and even at levels 4-6 it's not too exciting. It's at level 7 that things get crazy. Now, every time another player takes a turn, you get to take one afterward. In a two-player game, that "just" means you'll be taking two turns for every one of theirs. In a game with three or more players taking separate turns ... well, "one for you, one for me" sounds pretty fair, doesn't it?

What's better than casting a spell once? Why, casting it twice, of course. 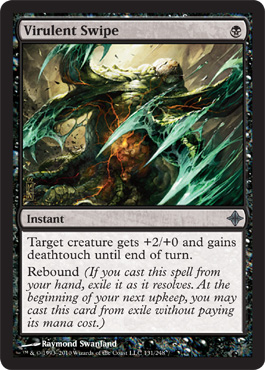 Instead of going to your graveyard, a rebound spell cast from your hand is exiled. You can then cast it again without paying its mana cost at the beginning of your next upkeep. (If the spell is countered, or you're playing it from somewhere other than your hand, it'll go to your graveyard like any other spell.) When one spell may not get the job done, get double your mana's worth with rebound!

Auras let you build your own monster, which is awesome, but most of them also leave you open to losing two cards at once if your creature gets destroyed, which is not so awesome. Totem armor gives you some insurance on your newly enhanced creature. 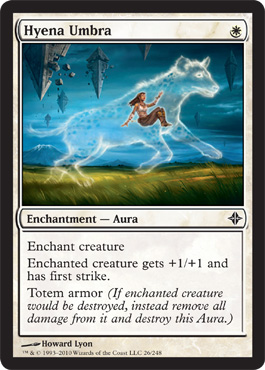 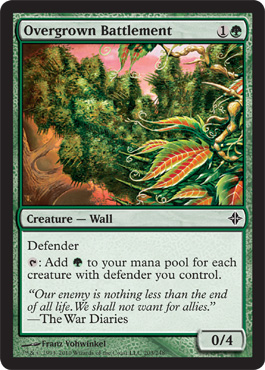 Overgrown Battlement works even better in concert with the Eldrazi as it does against them—it holds the ground and builds up your mana at the same time.

The Eldrazi onslaught will change the plane of Zendikar—and your games of Magic—forever. Stay tuned for official previews and updates through the Prerelease on April 16!