that time of year again. Saviors of Kamigawa is looming on the horizon to change whatever we learned about Block Constructed this past weekend, further shuffle the Standard decks for Regionals, and close the books on the Kamigawa storyline. This weekend there will be worldwide Prerelease tournaments that will allow players to try the new cards out for the first time in a Limited format.

Mainly I am here to give you a basic run through if you are attending your first Prerelease tournament – the first type of tournament many players ever attend. Now for all you tournament veterans I'll also be showing a preview card, but aside from that this article is mostly intended for players who do not normally attend tournaments and are interested in potentially coming out for the prerelease events (and may not have already read other primers I have done).

So for those of you who already are aware of how to navigate your way through a tournament (and just how much fun prereleases are), here is a common fattie you could very well expect to see both in your pool of cards and across the field of play. 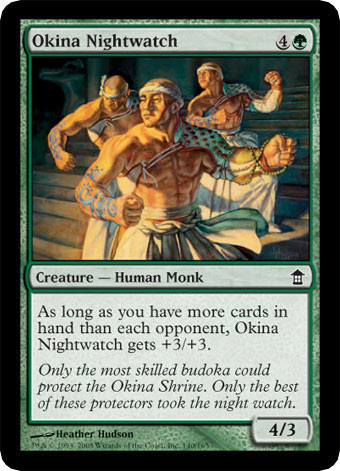 Now all of you tournament savvy guys clear on out of here and leave me alone with the new guys. Nothing else for you to see here. Alright give them a minute to click back to the main page and we can get down to it.

So you're thinking about heading to your first Prerelease. Cool. I remember my first Prerelease tournament. The first one I ever heard of was an Ice Age event in Toronto that was 'covered' online via the usenet groups. It was organized by Wizards of the Coast as was the second event for Homelands in NYC. The New York event -- October 14th, 1995 -- was my first Prerelease and I had to call and preregister as there were an extremely limited number of seats available.

Modern prereleases are held throughout the world by exceptional tournament organizers – the same people who run PTQs, Regionals, and State Championships -- under contract to Wizards of the Coast. You can find the list of events here. While you can preregister if you want to there is usually no need to do so. There are more than enough tournaments to accommodate the demand worldwide. Hopefully there will be one within a reasonable distance of where you live. If not there are release tournaments held the following weekend in gaming stores – the very same stores where you can go and play Arena League and Friday Night Magic.

At the Homelands event we had to pay some amount of money that I can't recall for some combination of cards that eludes me. I know we received an Ice Age starter and at least two packs of Homelands although we may have been given more boosters than that to work with. I do remember getting a pretty mediocre pool of cards but you have to remember that this was Homelands.

I remember clearly the excitement of waiting on line to get into the hotel where they were hosting the event. It seemed like we were waiting on line only to have a chance to wait on another line. There was paperwork to fill out at one checkpoint and our names had to be cross referenced with a list at another. There were two tournaments that were going to be run that day and that was it. I believe each tournament had 128 players and it had to fill up before it could begin. There was no DCI at that point but there was its predecessor the Duelist's Convocation and – I believe – we signed up for membership at yet another point along our journey.

The lines should not be as long for this weekend's tournament nor should the process be as complex. The science of running these things has advanced to the point where the organizer is able to let people through the door in smaller groups of people and start smaller 32-person tournaments – or flights – as they fill up. There will be some paperwork but it is nothing to be intimidated by. You will most likely be asked to fill out a registration form with your name, contact information, and DCI number.

If you do not have a DCI number you will have to sign up for one – don't worry it is free and easy. It is just another form to full out with a lot of the same information that is requested on the registration form. The two forms go to different places. The registration form is used by the organizer to enter you into the computer and possibly for your information to be collected for notices about future events. The DCI card that you fill out goes back to Wizards of the Coast so that your information can be assigned to the PIN on the registration card. There is also a detachable card with that PIN on the form that will serve as your DCI membership card.

You will want to tuck this card into your wallet, purse, or trade binder so that you can find it if you decide to play in any sanctioned tournaments in the future. Players who play in tournaments are eligible to receive Player Rewards. The more tournaments you play in, the more free stuff you receive. A credit card style membership card, exclusive token cards, textless spells, foils, and more. For example, the awesome textless version of you see right here is available only through Player Rewards, and will be shipping out to qualifying members later this month. You will also receive the Player Reward newsletter which features additional articles about the world of Magic that are not available outside of the Player Rewards program. Sanctioned tournaments also generate ratings points for players and you will be able to see how you are faring against the rest of the world, your country, state, etc.

We were handed a bag of swag along the way that featured all sorts of promo stuff, none of which was a foil Prerelease card commemorating the event. Players who attend this weekend's tournament will receive an exclusive foil version of a rare card from Saviors. In addition to the foil process and date stamped into the card the promo will also feature exclusive alternate art that will not be available to players who miss this weekend's festivities.

No, you cannot play with it in your deck. You can almost certainly trade it as there are usually traders at the tournament who will try and get multiple copies of the promo. While you cannot play it in your sealed deck it is perfectly legal for tournament play in other events (just not this one). The last card given away at one of these tournaments was . Ink-Eyes was most recently seen in the winning deck of Pro Tour Philadelphia Champion Gadiel Szleifer.

Back in 1995 when I sat down to build my deck for the Homelands tournament I had no clue as to what I was doing. Despite being involved with the game for almost a year at that point, I was a casual player second and serious tournament organizer first. It was not until I started playing with Ice Age that I caught the bug to play the game more competitively. I may have caught the bug but I sure had not found the cure yet. I remember looking at close to 50 cards that I wanted to play with and not being able to cull it down to something manageable.

I did not win anything when I played in the Homelands tournament – I think I was running in my third color so it should come as no surprise that I did not do well. Check your local organizer's website for detailed info about how well you need to do in order to win more packs. Here on the East Coast of the United States our local organizer gives a one pack participation prize to everyone in each flight. They also award prizes after four rounds to everyone with three or four wins. Many of the US tournaments are run in a similar fashion. You can either collect your prizes and go home after four rounds or queue up to rinse and repeat.

Even before I ever attended the Homelands event I would go out of my way to have Magic illustrators attend my tournaments and back in those days Jeff Menges and Melissa Benson were frequent guests of New York Magic tournaments. The ante was raised for the Homelands event with just about everyone who ever was involved in the development of the game coming to New York City. I met Richard Garfield, Peter Adkison, Jason Carl, Andrew Finch, countless artists and even took part in a 3-D Magic: The Gathering virtual reality presentation.

Once again you should check your local organizer's website. While the likelihood of a virtual reality tour of Dominaria is pretty slim there is a much better chance there will be an artist on hand. Mark Tedin, Rebecca Guay, and Rob Alexander will be on hand in the tri-state NY/NJ/PA area this weekend courtesy of Gray Matter Conventions. Even if you are not lucky enough to be near a site with guest artists you will still have a chance to meet players in your area who share your interest in Magic.

There will be dealer tables and traders aplenty at your local event. That is a certainty. Some players will trade for Saviors cards very aggressively to be the first person on their block with multiple copies of the hot new rare. The new cards will often trade for more this weekend than at any time after the cards are released. If you are looking for any cards to complete a deck or a collection it can be a great time to do so via trade or purchase from an authorized dealer.

I did pretty badly at that first tournament all those years ago. I kept my deck and cards and asked for advice from the better players in my area and learned how I could have done things differently. I did a little better at the next prerelease for Alliances and by the time Limited PTQs for the second Pro Tour LA rolled around I managed to qualify for my first Pro Tour – something I could never have done without taking that first step to play in a Prerelease. And more importantly, as you will hear from everyone else that did go to the events, Prereleases are really fun.

I hope you will give this weekend's event a try. I may not make it myself this time out since I will be heading back from the Invitational that Saturday morning and although I intend to play Sunday morning I know better than to say that with any degree of certainty. If you do go, please drop me a line and tell me how it went for you.