elcome back to Mirrodin, a plane in trouble. The Phyrexians are invading from the up-side down, the inside-out, and every which way they can. This weekend, we get the very first chance to play with Scars of Mirrodin, and I, for one, cannot wait. 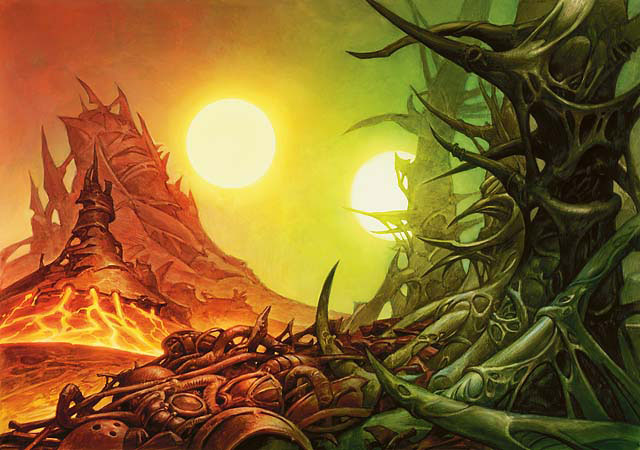 Mirrodin was one of my favourite sets for Limited play, so a chance to revisit the artifact block is one that I shall not be missing. All over the world this weekend, Prerelease tournaments will see players cracking the very first packs of Scars of Mirrodin, building, battling, and generally having a blast.

If you have the chance to be one of these players, I really can't recommend it enough. For me Prerelease tournaments are about the most fun of any Magic events. The mix of players is an eclectic one—spanning from newer players all the way up to top players who are regulars on the Pro Tour. However competitive players might normally be, all are drawn to the Prerelease by the same desire; to get a first look at, play with, and own the new cards they have been waiting for.

The fact that a Prerelease tournament uses new cards, and is played by just about everyone in a particularly fun environment, makes it the perfect event to try out tournaments for the first time. There are plenty of reasons to recommend tournaments in general. Personally I like having the opportunity to meet new people who share my love of the game. I get a kick out of seeing new decks, new plays, and new card-combinations. Tournaments are a handy social touchstone for me to meet up with old acquaintances, and are often staffed by traders who can help me pick up whichever wacky cards I'm after for my latest deck. It is only at a Prerelease that I get to revisit my early days of Magic though, and see new cards. 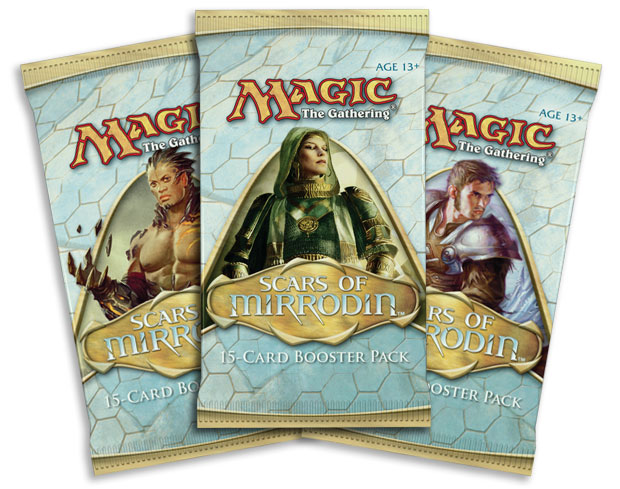 At the Scars of Mirrodin Prerelease, the format is Sealed Deck. Every player will get six boosters, and a special foil Prerelease card. This can't be played in the tournament itself, but can be played in whatever Constructed deck you fancy going forward. I know quite a few players that hold onto all their prerelease cards, as a memento of each event they have played in. 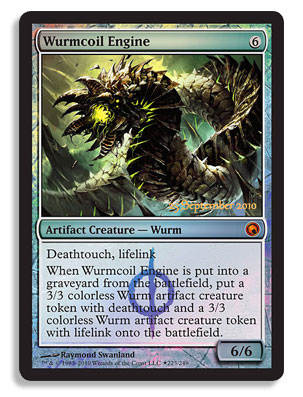 Promotional Wurmcoil Engine card available this weekend at a Prerelease near you (While supplies last).


From those six boosters, you need to build a forty-card deck with which to play. At a Prerelease, you are allowed to change around your deck between games if you want (still just using the cards from your six boosters), so there is no harm in being a little bit experimental and trying out some of the cards that look interesting to you. That being said, it can be a little daunting trying to work out the correct forty to play when all the cards are new.

My normal advice to players looking for a good start in building a Sealed Deck is to think about their mana. Losing because you were unable to cast spells isn't a great deal of fun, and neither is drawing only land. In a forty-card deck, playing about seventeen lands means you should have a fair mix of lands and spells. On top of that, I normally try to stick to just two main colours for my deck, perhaps with one or two cards of a third colour if they are very powerful. That way I don't need to worry as much about making the colour balance work with my lands. Call me old fashioned, but I like being able to cast my spells.

This desire to cast spells is probably one of the reasons that I liked Mirrodin block so much, and is one of the reasons I am so excited to revisit the plane with Scars of Mirrodin. With so many artifacts in the set, it is a lot harder to get stuck without spells to cast due to awkward mana. If anything, the harder decision to make when deck-building will be what to not play.

Working out which cards you should and shouldn't play in your Sealed Deck can be a little daunting, especially when faced with lots of good options. Even in this artifact set I would still look to pick two main colours, and leave the rest to one side, but for perhaps the most powerful options from a third colour. What cards are the most powerful? For me, ways of stopping opponents' decks are the first thing I'm looking for, and normally that means ways of killing creatures—the most common thing that will win games. Cards that can kill multiple creatures are just about the gold standard for me. After that, I'm looking for hard to deal with creatures. This will often mean flyers, big tramplers, or creatures with some other evasive ability. Between creatures and removal, I have a way of winning the game, and a way of stopping my opponents.

Once I have the skeleton of a plan, the goal is to flesh it out with a good mix of casting costs, and the best mix of creatures and non-creatures. The rough template for this that I start with tends to be about seventeen creatures, seventeen lands and six spells. Inevitably at Prerelease time I get lured into playing a few more spells (I'm a sucker for spells). The good thing about Prereleases is that I can always adjust my deck between games if I find that I'm not drawing quite enough creatures, so any such problems should be fleeting ones. 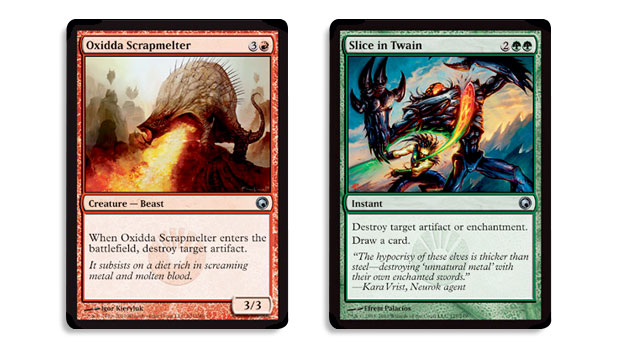 There are a few specifics to Scars of Mirrodin that don't apply to every format, but that are certainly worth bearing in mind for this weekend's event. The first I feel a little silly even mentioning, as it feels like it should be obvious, but it is important nonetheless. Artifact removal will be really good. In normal sets, Sealed Decks might have two or three artifacts at most, so not having ways of stopping artifacts is not a particularly big deal. At this prerelease, it will be a very strange deck indeed that has no artifacts, and artifact removal will frequently serve as creature removal too. The other one relates to one of the more innocuous reprints in Scars of Mirrodin. The cycle of 1/1 Myr that tap for coloured mana were a type of creatures that were actually very important in Mirrodin, and I don't expect that to change with Scars. Mirrodin block ended up being very fast, with affinity, artifact lands, and Myr, meaning that decks could run aggressive mana-bases with fewer lands than normal. In a format with lots of colourless costs, having a bump up on mana is something that lots of decks can use, and I found myself running off-colour Myr quite frequently the first time I visited the artifact plane—something I can easily see myself doing this weekend. 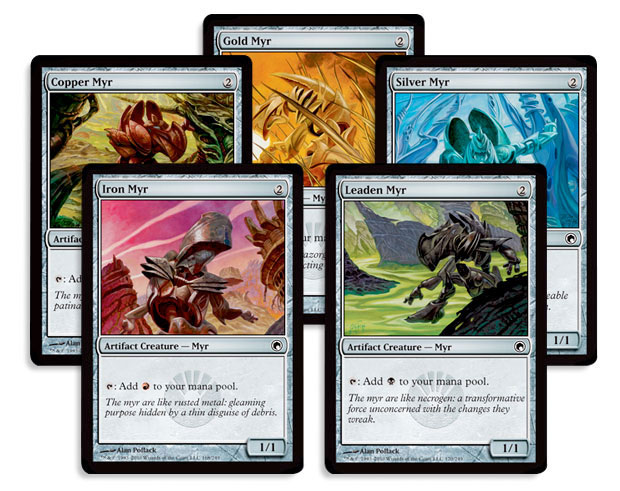 Finally, it is worth noting that while cards in Scars of Mirrodin have the faction symbols of either Mirrodin or Phyrexia, there is no reason for you not to cherry-pick the best of both for your deck. While I can definitely see myself building a few themed Phyrexian or Mirran decks in the weeks and months to come, for the Prerelease I would stick to building the best deck you can and having a good time. There will be plenty of time for battling with or against Phyrexia once the set is actually out on sale.

Given that I have spoken already of how the lure of the Prerelease is seeing new cards, it would be churlish of me not to part the veil just slightly, and allow you to see one more card to aid you in your preparation for the event. There have already been lots of powerful cards previewed, the likes of which would be excellent to win games on their own. My little common will not, itself, win the game, but it is well set up to ensure that whatever big threat you have can get the job done.

At Pro Tour–Amsterdam recently, I got to watch Brad Nelson playing Magic 2011 Draft. He was beating some of the best players in the world with various cheap green instants, starting at , and finishing up with . Withstand Death follows on from where starts, and then takes things a lot further.

It always used to be that the only people that got to have the delicious feeling of control were those players with a blue deck. There they would sit with countermagic in hand, and a win condition on the battlefield, just knowing that they had things all locked up on the board, and answers in hand to ensure that this situation would not change. Now it is time for green to have its turn.

Even if we ignore the bombastically good name, Withstand Death is pretty powerful for a common instant. I, for one, am very much looking forward to making little ricochet noises as and when I use this to protect whichever creature is winning me the game from any kind of harm.

Indestructibility is a powerful thing to grant. It is always rather disappointing to have your seven-mana monster killed off by something like a two-mana , and Withstand Death might well be a good reason to wait until turn eight to cast your big threat, so that you can be confident it will get to enter the red zone. Once a creature is indestructible, many of the most common ways of killing them simply don't work. Damage can't kill indestructible creatures, even if it is deathtouch damage. Any effect that says "destroy" will just bounce off, whether it is a or a . That you can ignore damage is powerful inasmuch as Withstand Death won't just stop burn spells on your creatures, it can also mean that they survive combat damage or similar too. Indestructibility is a step up from regeneration too. When a creature regenerates, it becomes tapped. Sometimes it is worth throwing a at a , knowing it will be regenerated, just to get it tapped down. Withstand Death on defence will mean that the creatures you intend to block with will be able to block, even if your opponent does try to kill one before combat. 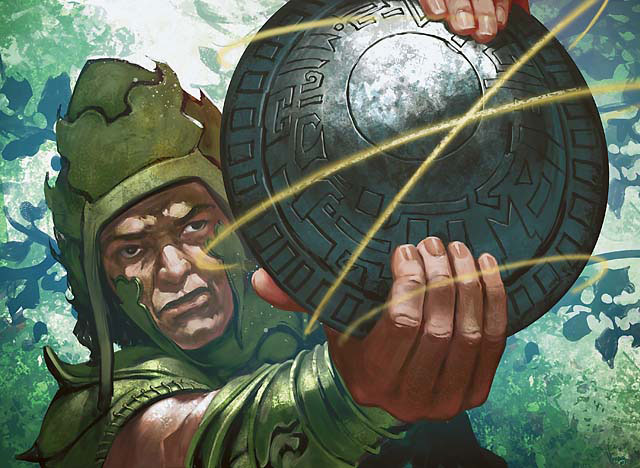 It is important to note that even indestructibility isn't infallible though. If an effect removes a creature from the battlefield without using the word "destroy", then it will work as printed. That means that bounce effects are fair game, as are effects that exile creatures. Perhaps sneakiest of all (and very Phyrexian in my book), reducing a creature to having a toughness of zero will still kill it. The most obvious way that this can happen when playing with Scars of Mirrodin is with infect. Infect creatures deal damage as -1/-1 counters, and if those counters mean that your creature has 0 toughness, then regardless of how indestructible it is, it is done for.

I shall be at the London Prerelease this weekend, battling to protect a pile of swag that gets whittled away by each person that beats me. I have my Phyrexian badges from the party at Pro Tour–Amsterdam, and will be proudly attacking the Mirran wherever I find them. If you want to come along and battle, I welcome the challenge. If you can't make it to London, I hope that you get the chance to visit a Prerelease near you.