Are you excited for Magic's biggest year ever? With Kamigawa and Dominaria on the horizon, Store Championships, Universes Beyond, and a new Secret Lair superdrop that dropped today, Magic Showcase 2021 was packed with incredible reveals, exclusive interviews, and first looks at the next year of Magic: The Gathering.

If you're just catching up—or want to skip to read about your favorite part—here's a rundown of the biggest moments from Magic Showcase 2021:

Secret Lair's Out of Time Superdrop

This superdrop has traveled from the far future, or maybe the distant past, to deliver a warning! It lost the sticky note with the warning written on it somewhere in the temporal vortex, so you should probably not worry about it and just check out the drops instead.

We teased about how Innistrad: Midnight Hunt promises a howling good time, and we're ready to show you more later this week about the Werewolf creatures and Harvesttide Festival at the center of it all.

On September 2, become what you fear with the Innistrad: Midnight Hunt debut, live at 9 a.m. PT on twitch.tv/magic and the official Magic: The Gathering YouTube channel.

The story of Innistrad continues with a vampire wedding to die for in Innistrad: Crimson Vow.

We'll have more details about Innistrad: Crimson Vow in October—consider this your exclusive invitation to attend.

And, for the biggest fans of Innistrad there's even more. We announced Innistrad: Double Feature today, a special release combining both Innistrad: Midnight Hunt and Innistrad: Crimson Vow into a unique draft experience.

With communities and locations around the world establishing in-store play again—Friday Night Magic and Prerelease events are two ways to join in the fun already—we know players who can participate are eager for even more opportunities to battle.

Taking place this December, Store Championships are among the first ways you can play for glory and prizes right at your local game store—just compete and you'll receive a promo Arbor Elf, make Top 8 to take home a promo Collected Company, and win it all to claim the one promo Wurmcoil Engine available at your store. Even cooler, the winner and Top 8 promos awarded at WPN Premium stores will have the store name printed on them, confirming your championship victory there every time you play one. 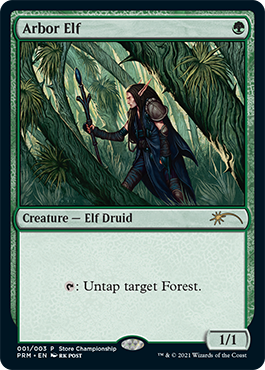 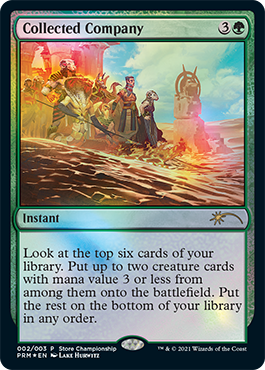 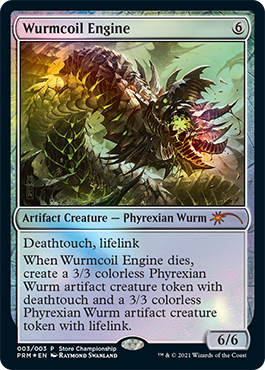 Plus, we've already teased Commander Party, a new kind of event to celebrate our return to Innistrad, where you'll join a faction and jump into a story experienced through Commander play. Your play group can join in the storytelling, get a sweet promo card, and enjoy the unique experience your local WPN Premium store provides.

You can look forward to the details for both the first Commander Party weekend, October 30–31, as well as Store Championships December 4–5.

Local game stores aren't just one of the best places to play Magic; they're also where you'll find some amazing and exclusive ways to play and expand your collection. 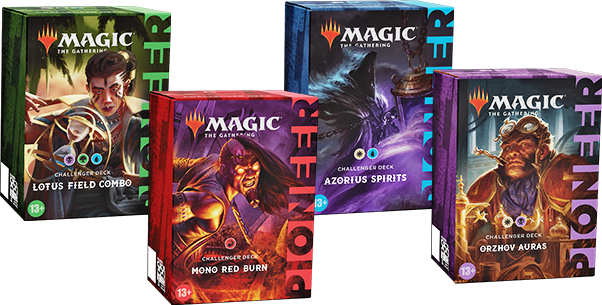 Coming to local game stores on October 15, the release of Pioneer Challenger Decks 2021 puts battle-ready decks right into your hands. A Pioneer-format take on the Standard-format Challenger Decks you already know, these four decks are ready for any player looking to leap into a fresh tabletop Magic competition:

You can see the complete decklists now.

And there's more—in early 2022 you can also expect a new wave of Standard decks with Challenger Decks 2022. With both Standard and Pioneer Challenger Decks in hand, you'll be ready for Friday Night Magic and beyond at your local game store. 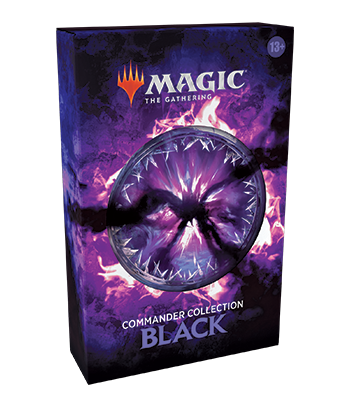 You can see the cards and token included in Commander Collection: Black now. 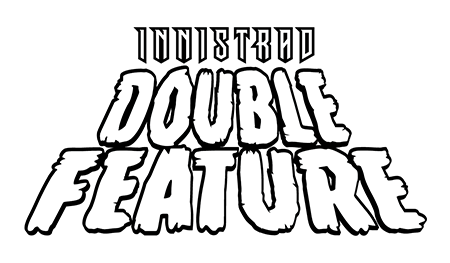 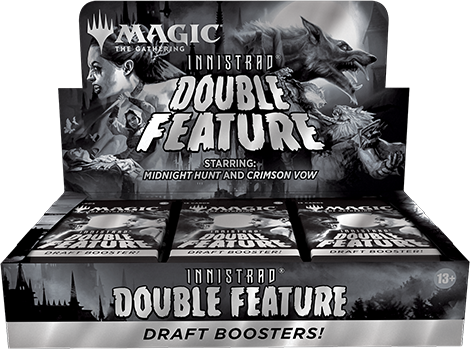 Four new Standard sets, starting with a return to the far future of Kamigawa and ending with a blast to Dominaria's past, headline Magic's biggest year of releases ever. 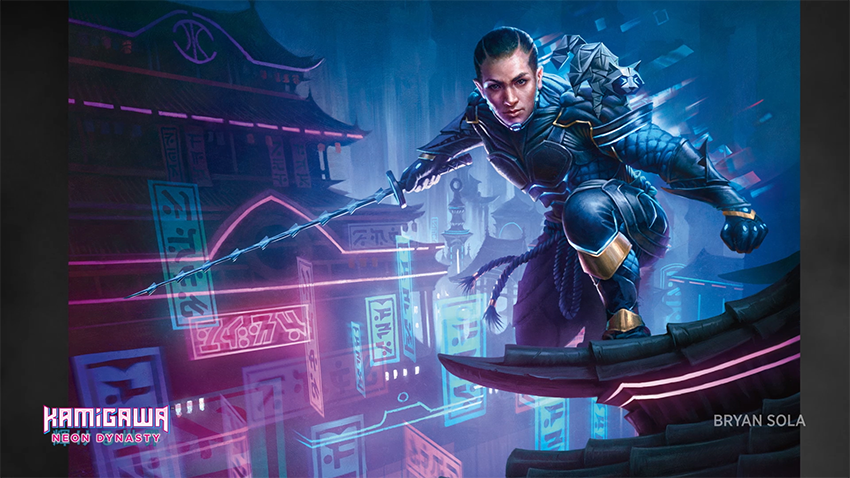 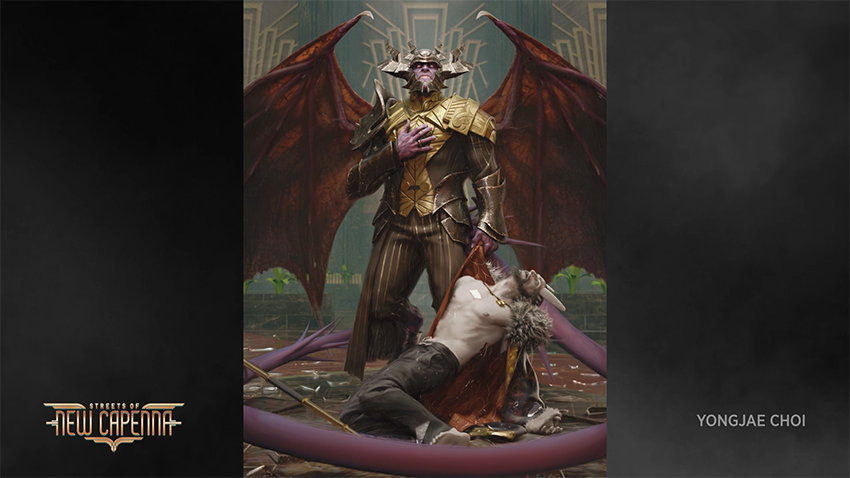 Trailing after our trip to Kamigawa like a detective with gumption, the following Standard release takes us to the Streets of New Capenna—a city with special significance to Elspeth, built by angels now run by three-color demon crime families.

We'll race through the Streets of New Capenna in the second quarter of 2022. 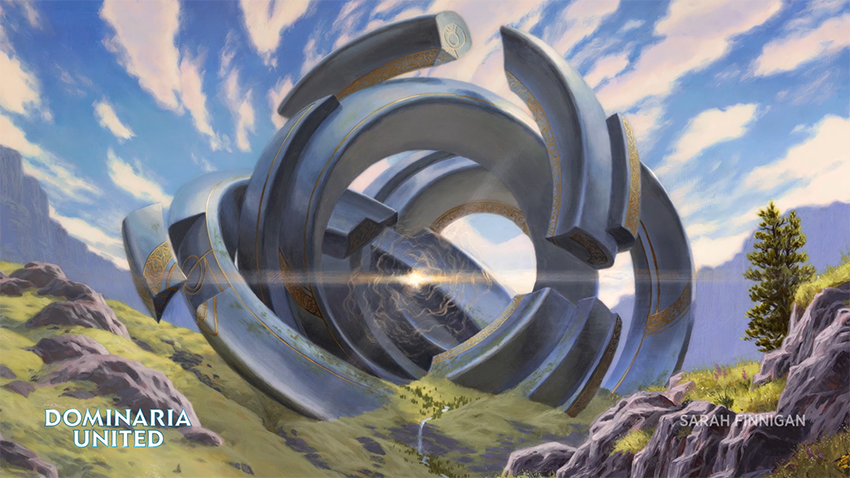 Dominaria holds a special place in Magic across the lore of game and in the hearts of fans around the world. With so much story and decades of Magic history packed into one plane, our next visit with Dominaria United is the perfect place to kick off our 30th anniversary celebration.

You'll be able to enjoy the original high-fantasy Magic setting again in the third quarter of 2022. 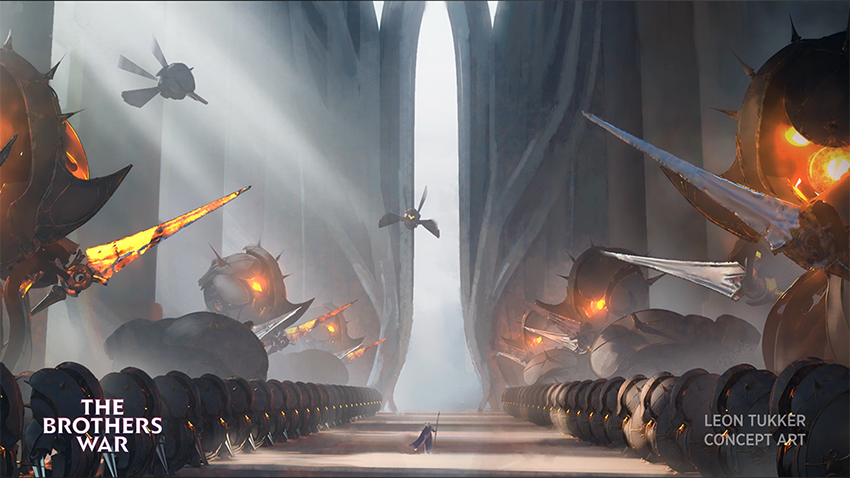 While Magic's history stretches back 30 years, the lore of Dominaria itself is much longer. Returning to a pivotal story of Dominaria's—and Magic's—history, what started as a feud between Urza and Mishra erupted into an all-out war that set into motion the future of the plane and Multiverse itself.

Through the lens of Dominaria's locations, characters, and victims of the conflict, we'll see a plane-spanning conflict escalate with artifacts, giant mechs, and beyond in The Brothers' War—arriving to stores everywhere in the fourth quarter of 2022.

That covers the four Standard releases for Magic next year, but it's far from everything on the way. Fans of Commander, Jumpstart, and more have plenty on the way in 2022, too. 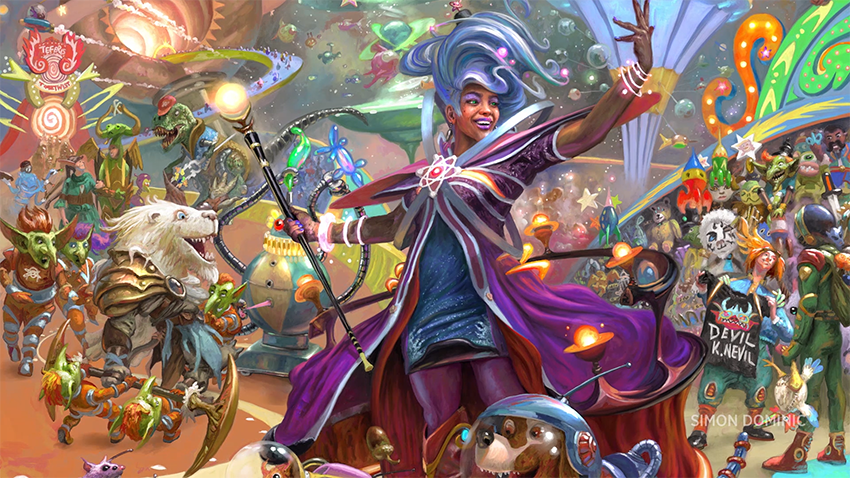 It's Magic. It's in space. It's retro-futuristic fun meets a space carnival you must see to believe. Unfinity brings the joy and celebration of combining Magic's mechanics with new characters, plenty of laughs—plus beautiful science fiction-themed full-art basic lands and shock lands—in both Draft and Collector Booster packs releasing in the second quarter of 2022. 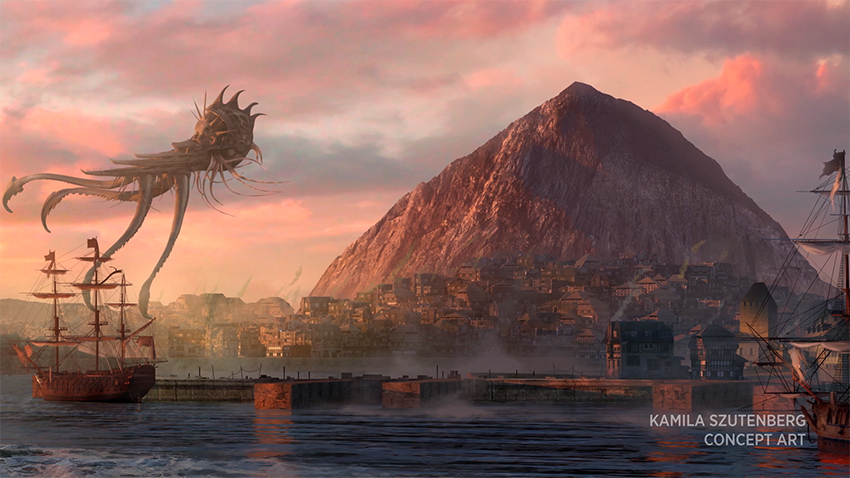 The debut of Dungeons & Dragons: Adventures in the Forgotten Realms brought a mix of Magic and D&D to life in amazing ways—with many more stories and characters from the Forgotten Realms to share. Focusing on the city of Baldur's Gate and building on the Commander-first gameplay of 2019's Commander Legends, our return to Commander Draft with Commander Legends: Battle for Baldur's Gate brings in iconic characters, new mechanics, more flavorful spells from D&D, plus Commander Legends-style foil-etched legendary creatures—all packed into an even greater social experience.

Be ready when the battle begins in the second quarter of 2022.

Everything fans loved about Double Masters—two foil cards and two rare or mythic rare cards in each Draft Booster—is back in Double Masters 2022 with more powerful reprints and a multicolor draft focus. All this, and more, arrives in the third quarter of 2022. 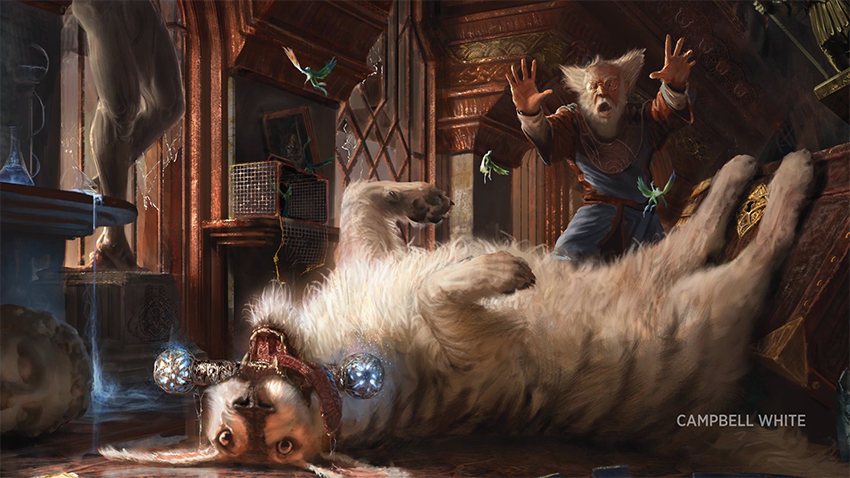 In addition to MTG Arena's Jumpstart: Historic Horizons release just around the corner, we're excited to share that tabletop gets a new twist on Jumpstart action too with Jumpstart 2022, arriving to stores around the world in the fourth quarter of 2022.

Leaping to new heights, Jumpstart 2022 comes packed with a new Booster Fun card treatment, a new-to-Magic card in every pack, dozens of themes to mix and match for fun—with plenty of amazing reprints for every fan to enjoy. 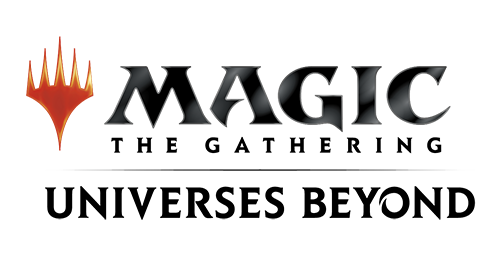 Earlier this year we shared an early peek at some of the incredible Magic to come with Universes Beyond. Today, we blew the doors open with new details and exciting artwork: 2022 and beyond sets up Magic players to explore even more incredible worlds and stories. 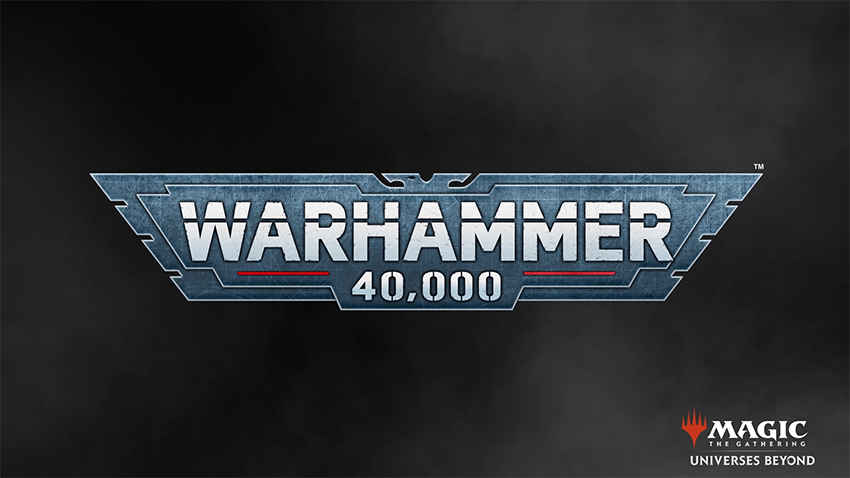 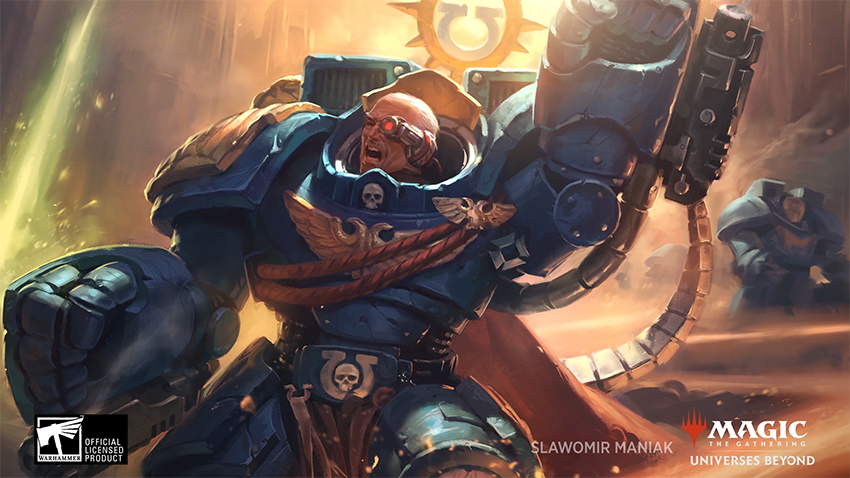 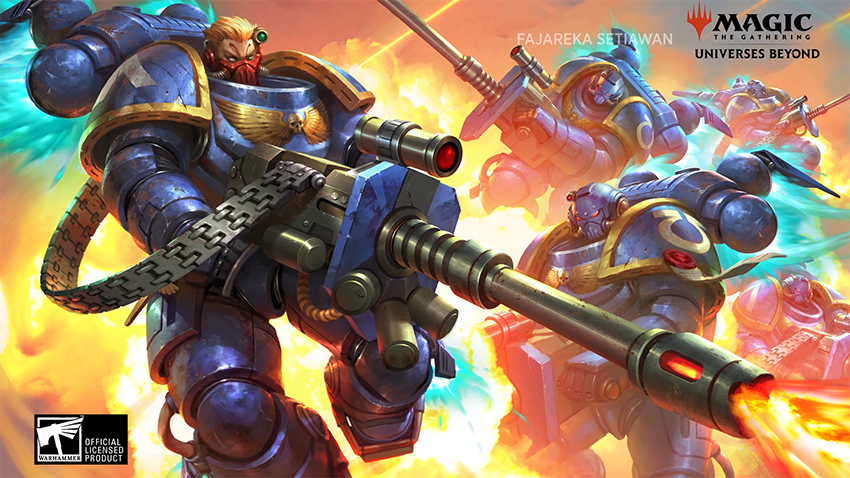 Featuring new art, new cards, and powerful reprints all set in the world of Warhammer 40,000, these Commander decks will be available later in 2022 everywhere you find Commander decks now. 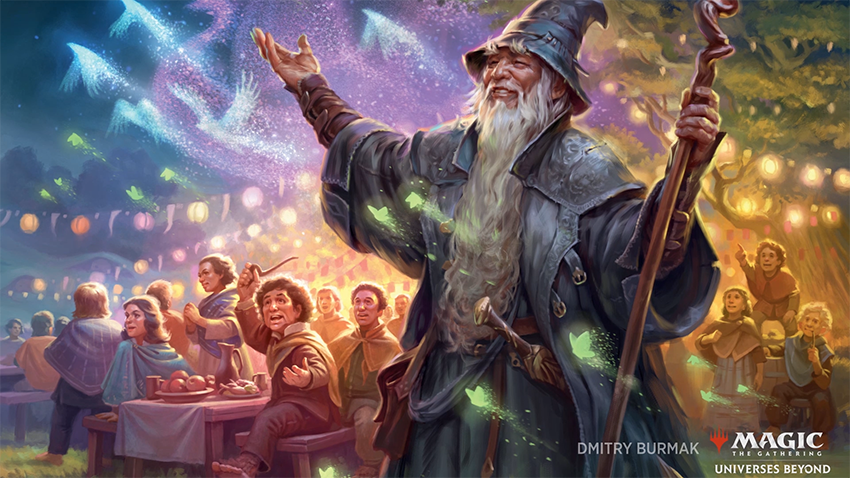 Arriving in 2023, The Lord of the Rings: Tales of Middle-earth™ brings the incredible depth of the world created by J.R.R. Tolkien to life with a full Magic set release.

Gandalf, Gollum, Frodo, Aragorn—the characters you know will immerse you in Middle-earth as you battle for The One Ring, scheme with Saruman, or journey to the heights of Mount Doom. Coming to tabletop, Magic Online, and MTG Arena—plus four Commander decks and special Secret Lair drops—this set will be available everywhere you play.

Learn more about how The Lord of the Rings: Tales of Middle-earth™ fits into Modern and Historic format legality when it arrives in 2023.

In addition to The Lord of the Rings Secret Lair drops, more Universes Beyond comes to Magic with two more exciting partners. 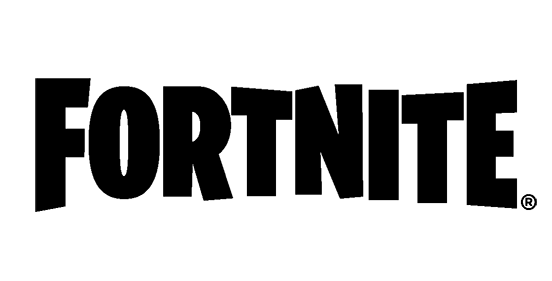 Fortnite will feature two special Secret Lair drops consisting of reprints like you've never seen them before—though you're on your own to practice your dance moves.

Street Fighter celebrates its 35th anniversary in 2022, and we're joining in the fun with a Secret Lair drop featuring its iconic characters in ways only Magic can celebrate. Multikicker is the perfect mechanic for Chun Li, right?

You can find these mechanically unique cards in the upcoming Secret Lair drop. You'll also be able to pick up in-universe versions in future releases, included as part of The List in Set Boosters.

What's Next for MTG Arena?

This year's launch of MTG Arena on mobile opened the game up to a whole new audience. In 2022, we'll continue adding more experiences that fans enjoy, whether that's practicing and polishing their tabletop Standard decks online or discovering the unique gameplay available with digital play, such as the August 26 release of Jumpstart: Historic Horizons. 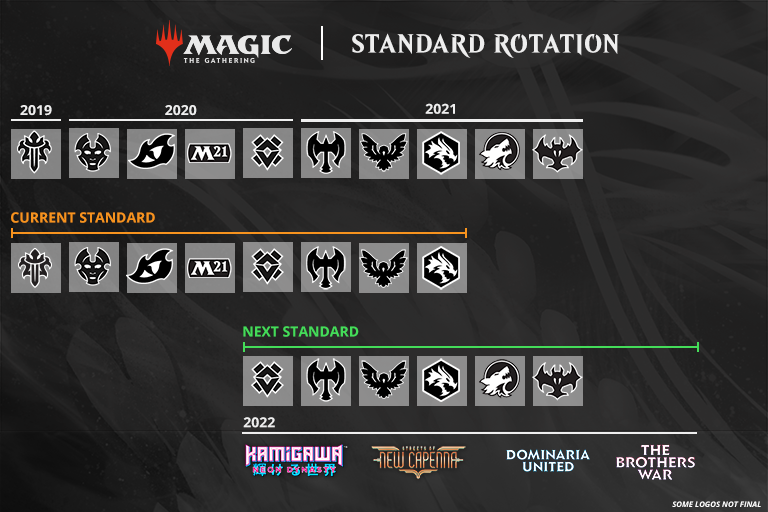 Standard rotates soon, and we'll see Throne of Eldraine, Theros Beyond Death, Ikoria: Lair of Behemoths, and Core Set 2021 move to be legal only in Historic. As we move to playing with sets from Zendikar Rising forward, we'll celebrate a new year of Standard for all players with a renewal egg filled with goodies—such as card packs and individual card rewards—when Innistrad: Midnight Hunt releases for MTG Arena on September 16.

Plus, those sets that rotated out of Standard will continue to shine thanks to the new Historic Brawl queue that arrives today! Pick your favorite legendary creature, build your 100-card Historic deck, and battle anytime, anywhere on MTG Arena.

And, if you want more competitive opportunities online, look forward to upcoming Arena Opens for your chance to win up to $2,000. Beyond Standard, Historic, and Sealed Deck, we're also adding Draft to the mix as well—something that will delight players who already battle to Mythic ranks with 40-card decks.

As we mentioned above, Jumpstart: Historic Horizons arrives this Thursday, August 26! With 31 new-to-Magic cards, 46 packets to mix and match, plus over 350 new-to-MTG Arena cards, including many from Modern Horizons and Modern Horizons 2, this is one packed release for every MTG Arena fan to enjoy.

Magic comes to Netflix in 2022 with its own series, starring familiar, fresh, and reimagined characters in a whole new story. Watch the reveal in our Magic Showcase 2021 video to see visual previews and, even better, hear from the voice of Gideon himself: Brandon Routh.

Expanding on the events that unfold in the Netflix series, the prequel novel dives into how Gideon and Jace bond—and distance—as they share causes, but distinct perspectives and abilities.

And that was Magic Showcase 2021—a look ahead into 2022 and beyond for Magic: The Gathering. You can relive all the excitement, plus watch exclusive teaser content, in the Magic Showcase 2021 video now—then mark your calendar for the Innistrad: Midnight Hunt debut on September 2, live at 9 a.m. PT on twitch.tv/magic and the official Magic: The Gathering YouTube channel.