Skip to main content
News / Feature
There's one kind of spell that every player learns to look for. It's the spell that can keep you alive, even if it's just for one more turn. It's the spell that neatly stops what your opponent has planned. It's the spell that can turn the tide and give you the room to come back from the brink of defeat to grasp victory. The answer to the spell everyone looks for: removal. But not just a simple spell that destroys one creature. Not all ways to remove creatures, or artifacts, or enchantments, or planeswalkers (or even lands) are equal. The removal that everyone wants is so powerful and iconic that it originally defined an entire way to talk about these effects: Wrath effects. It began at the start of the game with , but it continued in dozens of iterations and flavors across colors and sets throughout Magic's history. It's grown from "there's one copy ready every few sets" to a staple that appears in some form or another in every new Magic release—and often in multiples. Available in Standard today, you can find , , , , , , , , , , , , and —and that's focusing on creatures and is by no means perfectly exhaustive of every way to remove multiple things. And from that mostly complete list, at least seven of those cards have seen regular play in the best Standard decks, with fringe and sideboard play for even more. [autocard_hand]
Wrath of God
Day of Judgment
Damnation
Toxic Deluge
Deafening Clarion
Shatter the Sky
Storm's Wrath
[/autocard_hand] If you consider formats like Commander, Pioneer, and Modern, you'll find even more options that see play and provide value to players looking to wipe away a battlefield. (There's just too many to even begin breaking down here.) And Ikoria: Lair of the Behemoths adds another to the mix. This is Mythos of Snapdax, and it's going to win—or absolutely wreck—some games for you. 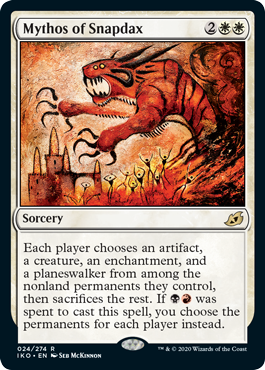 Snapdax was—and still is—a fantastically powerful creature that dished out such destruction that those who survived would tell the tale again and again. While the myths of history stretch tall, the fact is there's nothing secret about what you can do with Mythos of Snapdax. In Standard, you get a different take on that adds in destroying artifacts at the tradeoff of more total options staying on the battlefield. Against explosive decks like Jeskai Fires, Mythos of Snapdax will feel ineffectual, but facing down Mono-Red Aggro before hits the battlefield looks much better. Even in the best of times, at the face casting cost of 2WW, finding the right time to ensure your choices are ahead in parity against your opponent's will be tough. [autocard_fan]
Fires of Invention
Kenrith, the Returned King
Anax, Hardened in the Forge
Torbran, Thane of Red Fell
Embercleave
[/autocard_fan] At least it's tough until you factor in the not-so-secret colors of the spell to unlock its full potential. If you cast it for its Mardu mana cost of BRWW, then this isn't like at all: you get to make all the decisions for both players. You can't cast this from to get the benefit (since casts spells without paying for their mana costs—therefore without a black and a red mana), and you can't simply slip it into Azorius Control or Bant Ramp to add an option outside of . Mythos of Snapdax requires a red-white-black deck commitment, and it's not clear where it will find its home in Standard—an exciting prospect for building decks and attacking an established metagame. That's an adventure for competitive players as more of Ikoria: Lair of the Behemoths is revealed. But there's another format where the power of Mythos of Snapdax can be felt immediately and has obvious decks to fit right into: Commander. [autocard_fan]
Alesha, Who Smiles at Death
Edgar Markov
Queen Marchesa
Golos, Tireless Pilgrim
Najeela, the Blade-Blossom
[/autocard_fan] The more colorful your Commander deck, the more options you get to choose from. With "the best" of each of your colors available, there's often hard choices between similar effects to include in your deck. After all, choosing between , , and comes down to how your deck plays out and which option best fits as an answer you want. Mythos of Snapdax stands out as a unique choice for the decks that can play red-white-black cards. [autocard_fan]
Wrath of God
Toxic Deluge
Blasphemous Act
Merciless Eviction
Last One Standing
[/autocard_fan] Choosing what each opponent gets to keep can make the difference between simply resetting the battlefield to perhaps coming out on top and actively setting yourself up to be ahead. Even better, because Mythos of Snapdax tells us to sacrifice the creatures and doesn't target any of them, it bypasses common ways players brush off Wrath effects. Go-to "protect my stuff" cards like and won't tap the brakes on your battlefield carnage. [autocard_fan]
Avacyn, Angel of Hope
Asceticism
Eldrazi Monument
Dauntless Escort
Heroic Intervention
[/autocard_fan]

That isn't to say you should simply rely on Mythos of Snapdax to do all the heavy lifting itself. After all, few cards in Magic actually have the text "win the game" on them, and this isn't one of them. [autocard_hand]
Athreos, Shroud-Veiled
Brought Back
Cavalier of Dawn
Cavalier of Night
Ilharg, the Raze-Boar
Rise to Glory
The Cauldron of Eternity
[/autocard_hand] There are several ways to ensure that once the dust settles, you're ready to take advantage of the clearer path forward, and all the options above are available in Standard. Expanding into the cards available beyond that is exactly where the strength of commanders like and lies. If you're planning to play Mythos of Snapdax at its maximum potential, then the end result will be one where you are the monster for the story of a game told in the future. You can make your monster with Ikoria: Lair of the Behemoths beginning April 16 on MTG Arena and connecting with your local game store from home.
Feature