elno looked nervously at the floor and fidgeted with his staff. It was all he could do to keep from melting into a puddle of insecurity and self-doubt. He needed her backing; he hated having to ask, because he could see the way she looked at him. "Withering" was a good word for the look she gave him—a withering look. 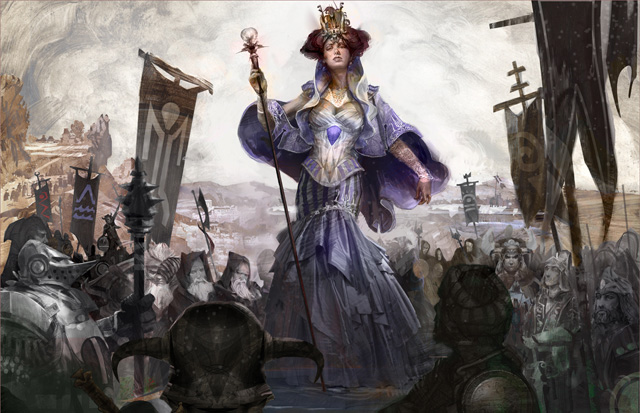 But she needed him. He was the one with the brains. He was the one whose genius made her family wealthy and powerful. Why, without him they would be simple miscreants, thugs... troglodytes.

Relno straightened himself up. No more fidgeting.

"I need more money." There wasn't a shred of "budge" in his tone.

Emina sighed as only a noble raised to manipulate and subjugate her lessers could sigh—subtle, disappointed, thick with disgust. Relno could feel it wash over him like a stench from a failed experiment. His nose instinctively wrinkled but he didn't waver. It was how these fancy-clothed people worked and he was determined to play their game and win.

There was a long pause, then Emina rolled her eyes.

"How much, Relno?" Exasperation forced Emina to hold the "o," which betrayed her usually unreadable demeanor.

Relno sat on the deck of the merchant ship as the wind and the sea filled his senses. It was a beautiful day. The canvas of the sails arced above his head and shaded him from the high sun that peeked out from behind them every now and then, as the ship pitched gently back and forth to the rhythm of the waves.

He couldn't wait to get back to his workshop, his mind racing with ideas. Finally, he had the funds he needed to finish his greatest work—it would be glorious. He scribbled notes as fast as he could. It would cost a fortune to ship the pieces from Martyne to his island lab, but he had all the money he needed now. He would send a bird to arrange the shipment as soon as he touched shore.

Next would be to create the elementals that he would need to put the pieces in place. That would take time and personal energy. He felt like he could create a thousand such elementals with the overwhelming surge of excitement that now possessed him.

He looked forward to climbing the steps of his tower and getting to work. He began to write a list of tasks for his faithful homunculus, Zurbit. There was much for him to do.

The bookshelves were bare, papers were everywhere, flasks and beakers lay broken, puddles of seawater pooled along the floor. It was an utter disaster. 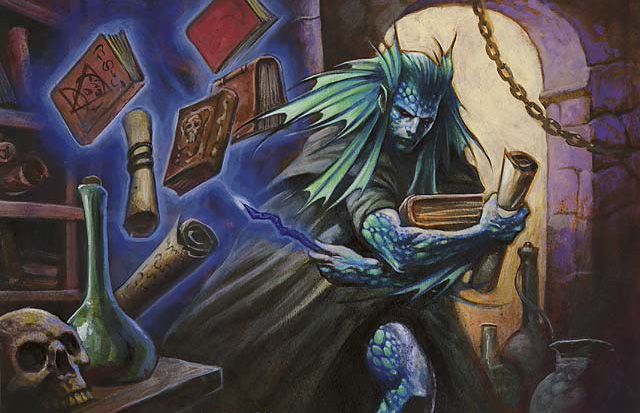 Zurbit gasped. Merfolk. How did they get in? He always locked the doors and barred the—

A window was shattered, its frame bent from a pry bar. Zurbit dashed to the opening. How in the five sacred blazes did they get up the side of the tower? It was hundreds of feet to the rocks below.

He scrabbled up to the sill where Relno's beloved orange-striped cat, Pip, was licking the salt and fishy flavor left by the intruders. Zurbit looked outside and saw the sheer drop. No rope, no ladder, no carved-out handholds. How had they done it? Was it the levitation potion? Zurbit was sure he had locked it up last month.

He cursed under his breath, dropped back down to the floor, and wrung his little hands as he surveyed the utter pillage of his master's tower. They had made off with the lot.

Relno was going to kill him when he returned. Zurbit had to get everything back.

Zurbit knew the merfolk who did this. There was a small group of them that lived in a small reef offshore, stealing from the land-dwellers along the shores of the Kapsho. As far as Zurbit was concerned, these finny folk were robbers and cutthroats—not to be trifled with.

He paced around the lab for a while while Pip idly watched motes of dust in a ray of sunshine.

Then, it hit him.

He grabbed a flask; a piece of parchment; pen and ink; and a thin vial of sparkling, green fluid from within a small, wooden box. He put everything in a pack, which he slung over his shoulder, then he scooped up Pip and headed off down the long stone staircase for the docks far below the tower.

Zurbit set out onto the waves in a small rowboat. Another smaller boat was towed behind them. Pip looked over the side, a paw at the ready for the scintillating fish that darted and dashed below the surface. Zurbit rowed with a purpose, hoping they wouldn't get spotted by a seacoast drake or something worse under the waves. 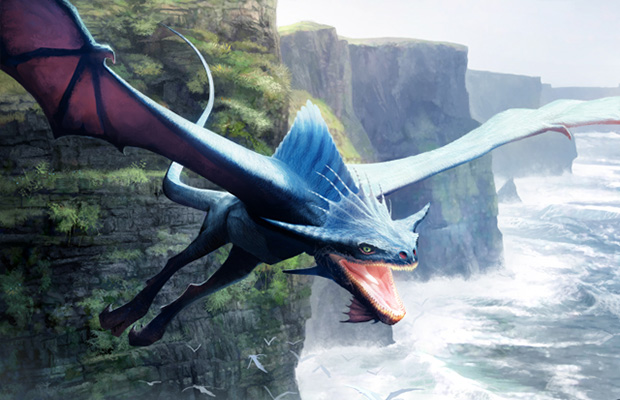 They reached the reef. Zurbit tossed the small anchor overboard and watched as the hooks caught on the coral below. He muttered to himself as he took out the pen, ink, and parchment, and hastily scrawled a message.

GIVE US BACK OUR STUFF OR YOU'LL BE SORRY.

He stuffed the message into a flask and made sure that it could be read. Then he stoppered it, tied a bit of fishing line around it, attached a weight, and after a quick look to check for position, he tossed it overboard.

Now it was time to wait and see. 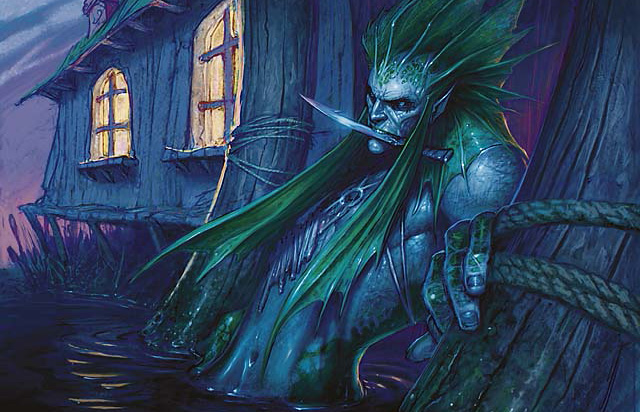 A merfolk surfaced, looked at Zurbit, and growled something like"Nnn-ahrrr." The merfolk's eyes were cold and smug as it submerged under the waves with a final hiss of contempt.

Pip watched the silvery scales as they flickered below the surface. He licked his whiskers.

"Right. That's it then you thieving fish-faces." Zurbit pulled on the rope that attached the two small boats and hauled the empty one alongside. Then he unstoppered the vial of sparkling green fluid and sctratched Pip between the ears. "Okay, my friend. It's time for your dreams to become a reality."

Zurbit touched a few drops to Pip's nose, and the cat promptly licked them up. "That's a good boy," Zurbit said as he poured more and more of the green vial onto Pip's tongue.

Pip looked at Zurbit, hoping for more of the tasty treat, but Zurbit just picked him up and set him in the smaller boat, untethered the rope that connected them, and pushed Pip out over the reef. 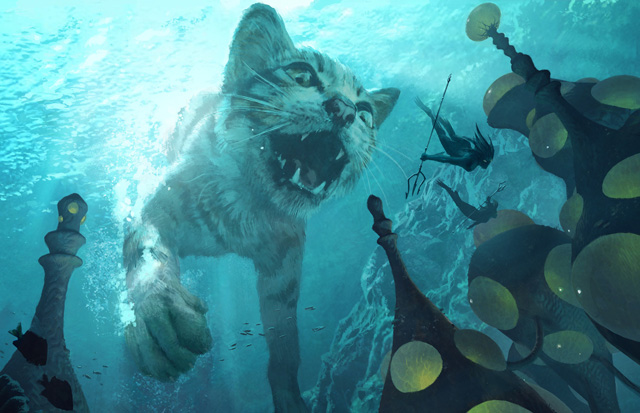 Relno opened the door to his tower. "Zurbit! Great news! We have work to do!"

He took off his cloak and rushed over to the table, where he began to pull the books off of the shelves that smelled... faintly... of... seawater? Relno looked about. Something was amiss. Pip sat on an open book and looked at Relno nonchalantly as he licked his fur. Scrolls were laid out on tables; books lay open along the floor. Pages and papers rippled as a strong breeze left the room.

"What in the Five Azure Flames has happened here?" Relno stood.

"Nothing, Master." Zurbit said matter-of-factly. He then smiled with satisfaction. "Just letting in a little sea air." 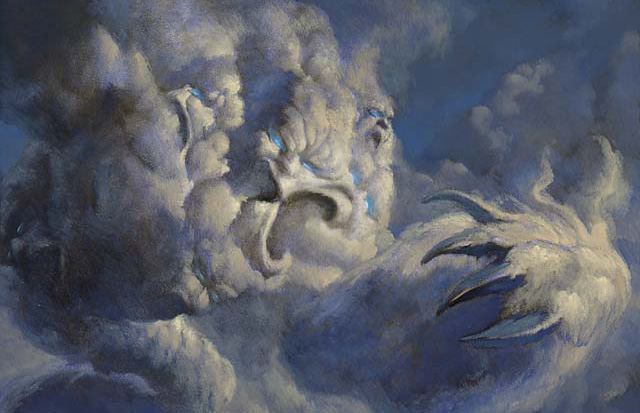