to Gruul Week! This is the fifth part (and the first of the Guildpact section) in a ten-part series exploring the color pie philosophies of the ten two-color pairings (the first four were "Group Think" [Green/White], "Life and Death" [Black/Green], "Pretty Sneaky Sis" [Blue/Black] and "Disorderly Conduct" [Red/White]). The entire series is a follow-up to an earlier five-part series ("It's Not Easy Being Green", "The Great White Way", "True Blue", "In the Black" and "Seeing Red") where I explored the color philosophies of each color. Note that I will not being talking about the Gruul in particular (check in on Wednesday in Matt Cavotta's "Taste the Magic" column for that), but rather the general philosophy of how Red and Green mix.

My required link-heavy exposition out of the way, let's jump right in. Here are the questions I've been answering in each column of this series:

Just five little questions. Let's get to it.

What do the two colors have in common?

As I explained when I talked about Green/White and Black/Blue, the trick for allied colors is to examine the two color's shared enemy. For Red/Green, that's Blue. What's Blue up to? Blue seeks knowledge. Blue wants to learn and understand everything because it values analysis and insight. Blue wants to take its time thinking things through. 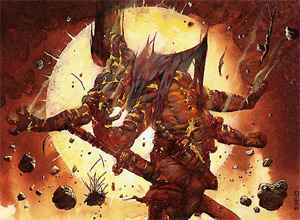 In short, Red and Green are about acting in the moment. They figure out what they want (albeit in different ways) and they, quite simply, go for it. Red and Green aren't particular subtle, especially when they get together. But then, they don't have any need to be. They don't bother hiding things. They just do what they do.

This tendency makes Red/Green the least organized of the guilds. Most of the other two-color combinations are trying to achieve some higher goal. Red/Green shoots much lower than that. They get an inkling that they want something and they go for it, with no holding back. This is why Red/Green is hard to defend against. They're almost impossible to predict, as they don't have any patterns. They're always focused on the task at hand, and they're about as raw as a guild could get. When Red/Green attacks it definitely sends the message: "Get out of the way!"

How do the two colors differ? What is the guild's internal conflict?

The trick with allied color pairs is to look at the conflict of the colors' other two allies. Red's other ally is Black while Green's other ally is White. The conflict between these two colors is the focus on the group versus the focus on the individual. White is motivated by what is good for the group. Black, in contrast, is motivated by what is in its own best interest. White is guided by morality. Black is amoral, not putting any value in concepts like "right" and "wrong". 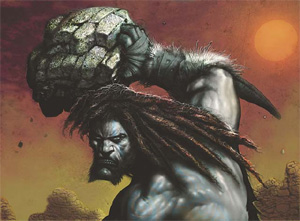 The way this plays out in Red/Green is that Red's impulses are driven by its own selfish needs while Green's instinct thinks of the larger community. Red is filled with individuals. Green is filled with clans and packs and herds. Emotions are very self-centered. Instincts pull towards a larger picture. What this means is that Red and Green, while "not thinking and doing," are doing so for completely different reasons.

The way this conflict plays out is evident in how each color attacks the problem. Red uses up all its resources as fast as it can trying to overwhelm the opponent with sheer power. Green, on the other hand, builds up its resources to get bigger and bigger things into play. This makes Red much more dangerous on turns 1 through 4, but makes Green deadlier every turn after that.

The other major difference rests in the motivation of the color. Red simply wants to do what it wants to do because it doesn't like restrictions. Red wants the freedom to do whatever it pleases. Green, on the other hand, is seeking a larger natural order. Green does what it wants not because it is seeking something but rather because it is trying to maintain life at it knows it. Red wants things to bend to its whim. Green wants things to just accept how the world is and deal with it.

The key to understanding what the guild cares about is to look at the goals of each of the two colors. Red is driven by its desire to live life without restrictions. Red wants total and absolute freedom. Red wants a world that allows it to act as it wishes without any limitations. Green is driven by its desire to allow the natural way to thrive. Green wants to prevent anything that would usurp nature.

The common bond between the two goals is that each wants its way of life to exist unimpeded. And both take the attitude of what to do if something tries – destroy it or at least beat it into submission. Thus, its end goal? Do what it wants. Its means? Brute power. Red/Green wants to treat every problem as a nail because it's got a really, really big hammer.

How does Red/Green achieve this? For starters by having the tools to destroy things. Between the two colors, the answer to every permanent exists. And by answer, I mean the ability to blow it up. Second, by adopting an uber-aggressive strategy. The best defense is a good offense. And the best offense? Just more offense. Bigger, meaner, gnarlier offense. The third way of achieving its goal is by taking a no-holds barred attitude. Red/Green doesn't try to figure out if it can do what it wants. It just does it, assuming that it will always find a way to force the square peg into the round hole.

The end result is a guild that's scary to be on the receiving end of. When Red/Green is coming at you, your survival instinct should take over and force you to run away.

The easy answer is to look at the goal of the shared enemy. Blue wants to seek knowledge. Red and Green hate knowledge seekers - they're up to no good. And if you give them time to do their thing, they find ways to stop you. This means that you have to pound them into the ground long before they have time to do that.

Red/Green hates obstacles. It hates limitations. It hates anything, that simply put, tells it that it can't have what it wants. It's a petulant little child. Well, except that this child can beat you up.

This hatred of restrictions forces Red/Green to proactively solve all of its potential problems. When it sees something that even has potential to be a threat, Red/Green has to destroy it while it's able. Red/green knows that if it can't press its advantage when it has it, it will succumb to the forces that actually think.

What is the color's greatest strength and biggest weakness?

Red/Green's greatest strength is the force of its brutality. With nothing making it hold anything back, Red/Green packs a powerful punch. Even colors with answers to Red/Green often fall to the speed and raw power of Red/Green. To paraphrase a famous pro player (Dave Price): "There are wrong answers; there are never wrong threats."

Each column, I like to spend a little time to explore some aspect of the guild that I think is misunderstood. For Red/Green I want to take a moment to explore the decision making of Red/Green. With all the emphasis on "less thinking, more attacking" I think there's a false assumption that playing Red/Green doesn't require any thought. Yes, it's aggressive, but aggressive decks require a lot of thought to play correctly. Knowing what to play and when and how to attack has a lot of variables.

I've spent a lot of time talking to pros who specialize in aggressive decks and they all say that the beatdown-style deck is much maligned in how much thought it takes to play it. I think this misconception comes from the fact that beatdown decks are the easiest to play on auto-pilot if you're goal is to play Magic with the least amount of thinking. While that might be true (and even that point is open for debate), playing auto-pilot is a far distance from winning with the deck. Winning with beatdown requires just as much skill as a control deck or a combo deck. The difference is in what things you have to focus on. Because the game is on average shorter, each decision becomes that much less forgiving. A control deck can overcome making a number of mistakes. Beatdown often doesn't have that luxury. Just a little nugget to chew on.

What would one of these columns be without me giving pop culture examples for you to rip apart in the threads.

The Hulk – This one is obvious as I used it in my teaser for this week. The Red part should be pretty straight-forward. The Hulk is a by-product of Bruce Banner (or David Banner for those TV fans out there) letting his emotions get out of control. The Hulk then runs around smashing things. Quite Red. So where's the Green? The Green rests in the nature of the Hulk (and no, I don't mean his skin color). What does the Hulk want? To be left alone. Hulk doesn't smash things up because it's fun to do so. He does so because he's trying to make the puny soldiers go away. He just wants to be. Add in his animalistic/instinct-driven nature and I think there's more than enough green to go around. 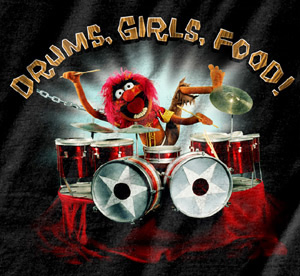 Animal (from "The Muppets") – Animal is a cross between an animal (hopefully the name gave this part away), a very Green thing, and a psychological id (the petulant child part of your emotions), a very Red thing. He's primal yet emotional.

Tinkerbell – In Magic, we've made a conscious choice to shift faeries from Green to Blue. This isn't because faeries aren't Green philosophically. It's for two reasons. One, Green just doesn't have much in the way of small fliers. And two, Magic has taken the traditional faerie and reshaped it into a creature that likes to trick and deceive. That said, Tinkerbell, as a classic faerie archetype, easily fits into Green's mindspace. (The connection to nature, the affinity with animals, etc.) The Red comes from how Tinkerbell functions. She's almost completely motivated by her emotions. Her hatred (or possibly just jealousy) of Wendy causes her to do all kinds of things that only come back to bite her later. She doesn't ever think these things through. She feels and she acts.

Kramer from "Seinfeld" - When you step back from the show and look at Kramer, you will notice that he is driven by two things: impulses and instinct. Never thinking. Kramer doesn't ever take the time to examine what he is about to do, he just does them. Why? Because either he's given into some emotion or because he just has the sense that it's the thing that needs to be done. Kramer is the embodiment of "do it now".

I Want It Now

And that is what I have to say about the least thinking of the guilds. As always I'm interested to hear your feedback.

Join me next week as I explore things we do that you don't like.

Until then, may you know the joy of doing now and thinking later.