of the most common questions I'm asked is “Aren't you afraid that you guys are going to run out of ideas?” The short answer is no. But then, when is my column about the short answer? The long answer involves letting you all in on a little secret. (Just between us.) The designers actually create more in a year than we're able to print. Not only aren't we running out of ideas, we're actually stockpiling them.

How could this be? Let me use Fifth Dawn as an example. While fiddling around during Fifth Dawn design, I came up with Mechanic X. I mocked up a few cards and played them a little. Mechanic X was pretty cool. So I started looking for places to put it. But it didn't fill any of the holes we currently had. I could have removed something else to fit it in, but the other thing was pretty integral to the design. So I saved it for a future design. This happens a lot. In fact, one of the keywords of Champions of Kamigawa is Mechanic X (a modified version at least). But that's the topic for a different column.

Today I want to talk about a different kind of design surplus. What I like to call “the meaty vein”. You see, over the years R&D has come up with a number of interesting areas of design. From time to time, a design team explores some path to see if they can make it work. While there are the occasional successes, most of these forays end up in dead-ends. But that doesn't keep the designers from trying. Today's column is about one such journey that finally succeeded. A little thing called arcane.

I guess I should start by explaining what arcane is. A new keyword mechanic? No. A new creature type? No. A new character on a quest to learn about him or herself and start/stop a global war? No. Arcane is a new sub type. For instants and sorceries. And while that unto itself is novel, the most interesting thing about arcane is what it does, or rather doesn't do.

But before I get to the present, I'd like to start out by visiting the past. The very first sub-type was created by Richard Garfield in Alpha. You might know them by their nom de plume – creature types. Over the years R&D has put sub-types on just about every kind of card. Artifacts got Equipment. Lands got things like Basic, Locus, and Urza's. Even enchantments had things like Enchant Creature (which has, in fact, spent some time as a sub-type – Champions, by the way, will introduce an all new enchantment sub-type, but that's also not really what this column is about).

R&D knew that someday we'd find a reason to put sub-types on instants and sorceries. Oh yes, one day it would be ours. But sub-typing instants and sorceries isn't the interesting part about arcane. The really interesting design space paved by arcane is the fact that it does nothing. It's a sub-type that has no rules baggage. Huh? Equipment, Basic, and Enchant Creatures all have one important thing in common. They carry with them rules baggage. Being “equipment” means something in the rules. But arcane? A spell with arcane doesn't do anything special. Well, nothing it wouldn't do without arcane anyways.

So, I'm hyping the fact that R&D made a sub-type devoid of a mechanic? Yep. Why is that interesting? Because we're using the sub-type as a marker. What is a marker? A marker is a term meaning that a card has a particular quality that has no purpose other than existing. Confused? Let me try using an example of another type of marker. Color. You see, color doesn't really mean anything in a vacuum. Other than signifying what color mana exists in the mana cost, color is just a quality. But as soon as Richard Garfield made cards like Crusade and Blue Elemental Blast, color became mechanically relevant.

The idea of using a sub-type as simply a marker has been floating around for many years. But each time it would come up, the design team of the time couldn't find a place for it. That is, until Champions of Kamigawa. When last we left our intrepid band of designers, they were using the Kamigawa block setting as an inspiration for the set's mechanics. The world had become “Shinto gone bad” in which the people have discovered that their “gods” were declaring war on them. (Why? I recommend checking out the Champions of Kamigawa novel.) This meant that there needed to be better definition of the two sides (the spirits and the humanoids) - especially the spirits, as it played into some very cool visual ideas the artists had.

And then it hit Brian Tinsman (or possibly Bill Rose, Mike Elliott or Brady Dommermuth – I wasn't on the team so I'm merely using the team leader as an example) that the spirits wanted their own magic. They wanted their own sub-type. Perhaps now was the time to take another pass into sub-type territory.

Playtesting showed that the fourth category was both the most versatile, the widest open for design and the most fun. Internally we called them Tatari spells (I'll be honest that I have no idea what Tatari means). Meanwhile, we had created similar cards for the Spirits. But having some cards triggering off arcane spells being played while others only cared about spirits being played proved confusing so the design team combined the two categories into one. Now all Tatari spells would trigger off of arcane spells and spirits being played. We even toyed with the idea of keywording Tatari, but in the end decided it wasn't necessary.

In the end, Champions makes several different uses of the arcane marker. While the largest number of cards is in category four, there are still numerous other ways the designers managed to make arcane relevant (heck, one whole mechanic only works on arcane spells – once again, for another column).

This, of course, leads us to today's preview card. Before I show it to you, let me quickly explain the other piece of the card. Champions of Kamigawa introduces the soulshift keyword mechanic. Soulshift is a creature ability that triggers when a creature is put into a graveyard from play. When this happens, that creature's controller may return a spirit creature in the graveyard to their hand with a converted mana cost equal to or less than the soulshift cost (the soulshift cost is almost always equal to one less than the creature's converted mana cost). But don't take my word on it, here's the official comprehensive rule:

502.39a Soulshift is a triggered ability. "Soulshift X" means "When this permanent is put into a graveyard, you may return target Spirit card with converted mana cost X or less from your graveyard to your hand."

502.39b If a permanent has multiple instances of soulshift, each triggers separately.

* The soulshift number tells you the maximum converted mana cost of the Spirit card you can target.

* You choose whether or not to return the targeted creature card when the ability resolves.

Without any further ado, here is my preview card for today: 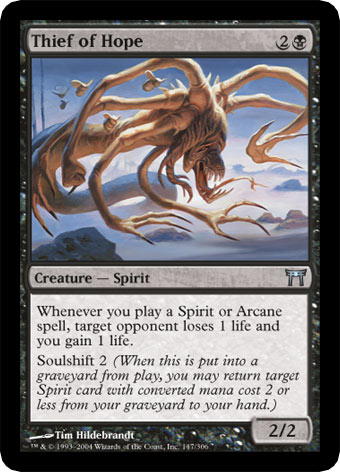 I hope you like it. While a little less in-your-face than my preview card last week, I think you'll find it has plenty of play value.

Join me next week when I explain why we are the Champions.

Until then, may you find your future hidden in your past.