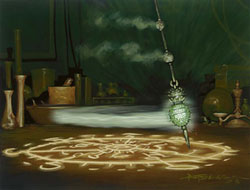 my favorite metaphor of Magic is that of a pendulum (you know, the metal point on a rope over a sand pit) constantly swinging in an ever-changing pattern. Design's job is to keep pushing the pendulum in new directions knowing that every aspect will eventually come back to center. Why do I bring up the pendulum metaphor (yet again)? Because today I'm going to discuss a different type of shift. One that is subtle yet key to Magic design. The reason I'm talking about it today is that this shift is no more apparent than the move from Onslaught block to the Mirrodin block.

Give Piece a Chance

The aspect of design I'm referring to is that of synergy. Or in simpler terms, how cards relate to one another. You see, trading card games are very much about the interrelation of various cards. This means that designers have to be very conscious of how cards are going to connect. Synergy, like any aspect of design, falls along a spectrum. In today's column I plan to introduce that spectrum, explain the extremes and talk about how they create different types of sets.

The first extreme is linear design. In a linear design, cards are designed to clump together in obvious groups. They have a very narrow but focused synergy. When you look at the set, it becomes quickly apparent what cards belong together. Onslaught block is an example of a very linear set. The tribal spine of the design forces players to naturally connect cards that share, take advantage of or affect a particular creature type. Linear designs tend to be filed with linear mechanics. Linear mechanics force players to build decks around a single aspect of the cards.

To better demonstrate, let's take a look at the key mechanics from the Onslaught block:

As you can see, the vast majority of Onslaught block mechanics skew towards the linear end of the spectrum. Now, let's hop to the other end.

Unlike linear design, modular designs are much harder to grasp at first glance. The connections are not so obvious. Mirrodin is very much a modular design. It was created to allow pieces to have much wider synergy. Modular designs make use of modular mechanics. Modular mechanics are designed to maximize their use with other cards and do not tend to force players to have to play with a lot of a certain type of card. Let's take a look at Mirrodin's mechanics:

Mirrodin cards tend to open doors instead of shutting them.

The Good, The Bad, and the Ugly

Each style of design has its pros and cons. Linear designs are more straight-forward and comforting. When you open a linear design, you know pretty fast what you're trying to do. In addition, linear designs play into a common need for game players (and people in general) to group things together. The biggest negative to linear designs is that they have a “R&D is spoon-feeding us decks” feel that often ruffles feathers.

The strength of modular designs is that they create a much deeper field for exploration. Because the options are so open-ended, the decision tree is quite large. This is also modular design's greatest weakness. It can be very intimidating. Mirrodin sealed, for example, is daunting when you first start playing because you have so many more options than normal.

In addition, modular designs have one other big drawback. They are much harder for R&D to develop. A set like Onslaught is pretty simple to test. How is the goblin deck? The beast deck? Etc. But Mirrodin is a completely different animal. The increased avenues of exploration put extra stress on R&D's limited resources of time and manpower.

Why does R&D vacillate between the extremes? Because different players tend to gravitate to different styles of synergy. Most Timmy's (see my column “Timmy, Johnny, and Spike” if this terminology confuses you) and more casual players like the comfort of linear design. Most Johnny's and more advanced players tend to gravitate toward the complexity of modular designs. As with any aspect of the game, it is R&D's job to try and make sure the game (over time) hits all of the different groups.

Also, it's important to remember that all sets have aspects of both types of synergy. Every set will have individual cards that pull players down each path. In design, it's never a question of which type of synergy but rather what percentages each will have.

Look in the Mirrodin

Mirrodin has a very skewed percentage. While there are some linear components (you can already see the myr deck slowly coming together), the set is much more weighted towards modular design. Possibly the most weighted a set has ever been. How did this happen? I believe the answer is threefold:

One of my hopes of explaining Mirrodin's modularity is to give you all a chance to better observe it. One of the reasons I wanted to start writing a design column is that the designers do all sorts of neat things that get glossed over by many of the players. By taking time to point it out, I hope that I can help some of you appreciate some of the subtler elements of the set.

Anyway, that's all I got for today (Under 2000 words? Am I feeling okay). I hope this column will give you a different vantage point to look at design. As I hope my column demonstrates, design has many, many facets. I promise in future weeks to show you some more nooks and crannies.

Join me next week when I take you on a little mind exercise.

Until then, may your card A find its card B.

Mark may be reached at makingmagic@wizards.com.
Making Magic