to Week Two of the Betrayers of Kamigawa previews. If you've cracked my secret column-naming code, you've deduced that this week I'm going to be talking about the flip cards in Betrayers. To do that I'm going to have to take you to a place that I seldom go in my column – into the mind of Betrayers lead designer Mike Elliott.

I should quickly add the caveat that this column is me taking my best guess at how Mike's design worked. One of the major reasons that I focus on my own designs (perhaps you've noticed) is that I mostly understand my own fevered creative processes. But every designer works differently, so whenever I focus on another designer, I have to use my basic designer instincts to make a logical guess how they would have designed the card(s) in question. (I do also talk to the designer, but I find that most designers have trouble verbalizing how their own processes work.) In short, this column is my best guess at what happened.

See You On The Flip Side

So Mike sits down to start Betrayers of Kamigawa design. The very first thing he does is look at Champions of Kamigawa. What does he have to work with? What mechanics does Champions have that Mike can build upon? In addition, what did Champions do that the audience is going to expect Mike to follow up on? A quick search through the file will quickly bring you to the flip creatures. The flip cards are a new type of card introduced in Champions. They are unique. They are sexy. And as such they've proven pretty popular. In short, it's a mechanic that Mike has to deal with.

And he can't just do more. No, the audience will expect something new. A twist, a tweak. Something that Champions of Kamigawa didn't do. Why? Because it is something that the designers have engrained into the block system. Block mechanics grow and evolve over the course of the block. Players don't just want the second and third sets in the block to simply be “more of the same”. No, they want “more of the different”.

One of the reasons it's so hard to write about another designer's process is that each designer creates differently. But I'm assuming that Mike starts where I often start when looking to expand on a block mechanic – the staples. That is, you always begin by looking at what tricks have worked before. (Note that there are a slew of unused tricks, but I'm not about to spill those.)

Let's Flip For It

After examining all these options, Mike gravitated towards the last one. Is there a new way to make use of the flip cards? The answer rested in finding a way to change the key part of the cards – the flip condition. In Champions, the cards flipped by accomplishing some task. What if the Betrayers flip cards just had a different kind of flip trigger? This led Mike to start thinking about other types of triggers. In the end, the one he kept coming back to was time. What if these cards just changed when enough time elapsed? This led to the earliest versions of the flip cards. These cards got a counter each turn and flipped over when they had three counters. These counters were then a resource to be used by the flipped version of the card.

These cards had two problems. One, the time versions weren't very interactive. The player had no real ability to affect the flip. And two, it didn't have any synergy with anything else in the set. That's when Mike thought back to the “Combine the Mechanics” strategy. Was there a way to tie the mechanic closer to the set while also giving the player some ability to affect the change? The answer was yes, the arcane/spirit triggers. So Mike changed the cards such that they gained a counter every turn and whenever an arcane or spirit spell was played. This way, you could just let them evolve normally, or you could help speed along the change.

Playtest showed Mike (and Randy, the other member of the design team) that the arcane/spirit triggers were enough. They gave the player the sense of elapsed time that Mike wanted but more organically fit into the set. To sync this new version up to match a similar time frame, the counters (now called ki counters) were dropped from three to two.

And thus we ended up with the cycle (yes, there's one of each color) of Betrayers flip cards. Because it would be mean to walk you this far through the mechanic's design and not show you a finished version, I present Cunning Bandit. 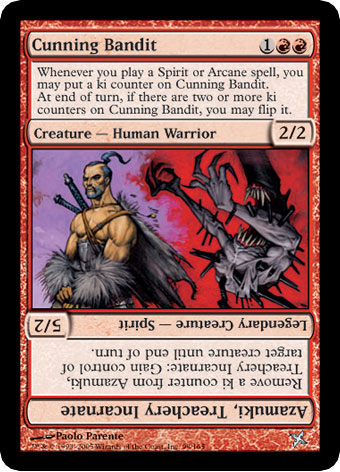 And that is how the Betrayers flip cards came to be. I hope you enjoyed the journey.

Join me next week when I peek my head back into the world that is R&D.

Until then, may you find ways to evolve things in your own life.