I’m sure by now you have all heard Torment referred to as "the black set." While rumors having been spreading wildly as to what exactly that means, let me put all of those discussions to an end. Torment is "the black set" because black has more cards than any of the other colors. In addition, white and green – black’s enemies – have fewer than any of the other colors. But, how could this be, you ask? R&D always balances the colors! Well, for the last eight years and twenty-four expansions, we have. (Trivia purists, see sidebar for a few exceptions.) 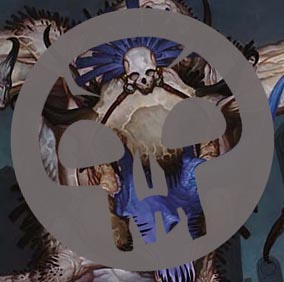 So, why did we do it? And how did it actually happen? Two very good questions. The kind of questions, in fact, one could build a column around:

WHY DID WE DO IT?

Part of R&D’s job is to understand what makes Magic a popular game. We can’t keep recreating the magic, if you will, without understanding what makes it tick. Now this is a very complex issue as Magic’s success is the result of numerous factors. But one of the most important is the game’s ability to constantly evolve.

The reason many games have a short lifespan is that the audience eventually cracks them. Let’s take Tic Tac Toe as a simplistic example. At first the game is fun. But eventually you realize that there is a strategy that will allow you to never lose. Once you realize that, you grow bored of it and move onto another game. Magic avoids that problem by constantly changing. Just about the time you crack an environment, a new expansion gets added and everything shifts.

That means R&D has to find ways to keep evolving the game. One obvious way to do that is to introduce new concepts, which is why we create new cards and new mechanics. But R&D also works at a step up. We don’t just change the cards each year, we change the environment.

Invasion, for instance, had many powerful cards like Fact or Fiction and Urza's Rage. More importantly, though, the set introduced a rich multi-color environment. Players had to learn to adapt to a world where multi-color decks were not only possible but superior. As Invasion leaves different formats, its absence will force players once again to rethink their strategies.

The challenge for R&D is to constantly think of new ways to shift the environment. One of the best ways to do that is for us to look at what rules we’ve created for ourselves and see which ones we can break. One die-hard rule was that every set had an equal number of cards in each color. What if for one set we didn’t do that? We thought about all the ramifications and decided that it created an interesting opportunity.

Just remember that the environment is ever-changing and that any shift in one direction will always return back to its neutral state. In short, the game keeps changing so things will never stay the same for too long.

HOW DID IT ACTUALLY HAPPEN?

One of the things I hope to do in this column is give all of you an insight into how key decisions get made. So, here in a nutshell is how Torment became the “black set”:

Bill Rose is the head of Wizards R&D. For years, Bill had bandied about the idea of creating a set off-balanced in color, but the time never seemed right. As the lead designer for Torment (then code-named "Boron"), Bill was trying to find an interesting hook for the set. Somewhere during this time, the Magic brand team decided to name Odyssey’s first expansion Vendetta. 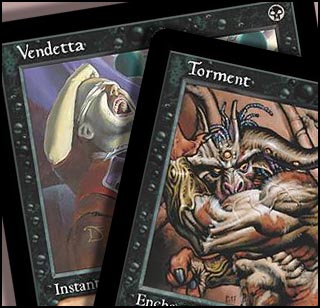 One day Bill and I were talking in his office when the topic of the new name came up. “So, what do you think of the name?” Bill asked.

“I don’t know,” I said, “It’s a good name, but I’m worried it implies that the set is going to be something it isn’t.”

“What do you mean?” asked Bill.

I could see Bill’s eyes light up. He then went to talk to Brady Dommermuth, Magic’s creative director (the guy in charge of all the flavorful aspects of Magic such as names, card concepts, and flavor text). Bill quizzed Brady about the Vendetta story. The main character was a dementia summoner named Chainer, Dementia Master who uses the Mirari to gain strength for the Cabal. “So, if I wanted to sum up the Vendetta story in one sentence,” Bill asked Brady, “I could say it’s a story about how black gets very powerful?”

Bill had his hook. Vendetta would be the "black set."

Ironically, the name of the set was changed months later to Torment when the brand team learned the name Vendetta, for various reasons, was no longer useable.

LAST BUT NOT LEAST

Last week I mentioned that I would be finally talking about how all of you will have a chance to create an actual Magic card that will be published in an upcoming set. When we were in the early stages of creating MagictheGathering.com, we tried hard to come up with cool features we could create that would get all of you actively involved with the site. One idea was the Orb of Insight (then nicknamed the Hint-o-Matic). Another idea was a concept for a feature that would let all the readers of the web site work together to make an actual Magic card. Well, that new feature is called “You Make the Card” and it will premiere this Wednesday (yes, in two days). This feature was designed to not only give you guys a hands-on experience but also allow you a first hand look at how a Magic card, with all its various pieces, is created. So join us Wednesday for what I know will be another cool MagictheGathering.com first.

Be sure to come back next week when I explain how R&D looks for good mechanics (and I’m not talking about cars).

Until then, may your opening hand never need a mulligan.