dgar has what he thinks is a pretty good opening hand. He gazes down and sees rare after shiny mythic rare card. Land, land, land... a Sphinx's Revelation (big game), his Ætherling (his unstoppable finisher), and a pair of Supreme Verdicts (destroy all monsters). I can't lose, thinks Ed, to himself. Certainly not to a creature deck.

Gabby opens up with a Swamp and a tapped Tormented Hero.

What a silly card, thinks Ed, to himself. It doesn't even enter the battlefield straight.

That isn't even a real card thinks Ed, drawing a Fiendslayer Paladin. I'm really going to DESTROY Gabby with this!

Gabby plays a third land and lays down a Lifebane Zombie. There goes that Fiendslayer Paladin (theoretically great against black... but also a white creature)! Gabby slams for 4 damage as Ed draws a Dissolve and plays his third land.

Why couldn't Gabby have played a spell? Ed asks himself, staring at that Dissolve.

Like clockwork, Ed has his fourth land... unfortunately it is a Temple of Enlightenment.

Even if his fourth land had properly entered the battlefield untapped (so that he could have played Supreme Verdict) the game probably wouldn't have gone very well for Edgar, thanks to Gabby's lead and the follow-up threatened by that mighty Mutavault.

What could Edgar have blamed this on? His cards were sweet and sweeter; rares, creature crushers, and big battle cruisers. It is very difficult to say Gabby's cards were "better" than Ed's in this game.

Ed also wasn't mana screwed... he hit all his land drops! He didn't mulligan, didn't fall behind in card advantage, or stumble in any obvious way; in fact, if he had been able to pull off his turn-four Supreme Verdict (presumably into a later Sphinx's Revelation), Edgar would have had a huge lead in cards! Yet Edgar not only was never in this game, but he managed to lose to a Thrill-Kill Assassin and an unenhanced Tormented Hero while drawing a Fiendslayer Paladin!

Quite simply, Edgar's opponent Gabby made great use of the notion of mana curve... and Edgar didn't.

The mana curve is a concept that entered the Magic canon shortly after the first Pro Tour. Mana curve's original implementation was closely related to redundancy—the idea of playing a land every turn and tapping all your mana every turn. In its original form, mana curve asked players to look at the cards in their decks not (just) as unique spells, but around their collective and similar casting costs.

In this 1996 deck—the first deck really designed with mana curve in mind—would have asked you to think of Brass Man, Dwarven Trader, and Goblins of the Flarg all as a single class of offensive creature cards that you could play on the first turn; Ironclaw Orcs, Orcish Librarian, and Dwarven Lieutenant together as creatures you could drop for two mana; and Brothers of Fire, Orcish Artillery, and Orcish Cannoneers together at three.

Dwarven Trader? Goblins of the Flarg in the same deck as Dwarven Trader? What probably strikes you as most obvious looking at this deck is how far creatures have come over the last eighteen years! Paul Sligh really bent over backwards to run some one-drops!

What ultimately ended up being the useful takeaway around mana curve is this: Play with some lower casting costs, especially in order to take advantage of your early-game land drops, then tap that land to get utility out of it.

In our opening story, how did Gabby take advantage of mana curve while Ed didn't?

Gabby played land #1 and used it for the Tormented Hero; in the broader redundant sense, tapping for Rakdos Cackler would have sufficed.

Gabby played land #2 and followed up with the Thrill-Kill Assassin. Again, the hungry mana curve would have been satisfied with Pain Seer or Pack Rat, too.

Gabby played land #3 and tapped all three for Lifebane Zombie. Lifebane Zombie was a table-snapping elbow drop against Edgar's freshly-drawing Fiendslayer Paladin, but the mana curve might have been happy to see Gabby drop a Herald of Torment.

Even though nothing got cast on turn four, two of Gabby's lands were committed to a huge 9-point attack, being Mutavault and a Swamp pouring a point into Mutavault.

Put simply, Gabby played a land basically every turn, and used all that mana (getting a two-for-one on the way, natch).

What about Edgar's side of the table?

The simplest way of looking at this is just that Gabby's cards were cheaper... so even with a limited amount of mana (say, one Swamp), they got cast. Edgar's cards were relatively clunky. They were all good, powerful, cards... and not a one got cast.

It would be needlessly superficial to say that Gabby's deck was active and Edgar's reactive and explain everything away that way; controlling decks can take advantage of this concept and tool as well. Such decks can take steps to lower their curves, for example by sideboarding in one-drops like Soldier of the Pantheon; or tap all their mana for a turn-two Syncopate (in answer to the opponent tapping most or all of his or her mana).

How different would our imaginary game have been if Edgar took the first hit from Herald of Torment, but just Syncopated the Lifebane Zombie? Edgar might have taken maybe one more hit from Thrill-Kill Assassin before turtling up behind say one Azorius Charm or Last Breath. He might not even have had to cast Supreme Verdict, just hide behind the Fiendslayer Paladin until he had the mana for a nice Sphinx's Revelation.

But given our scenario... he just didn't tap his mana to play many cards (while his opponent curved out perfectly).

This famous blue deck, played by Hall of Famer Randy Buehler, very nicely illustrates how a reactive deck can still take advantage of mana curve principles. Randy played cards like Force Spike, so even if he was going to be the slower deck in almost any matchup, he would have defensive play—even on turn one. Usually, a one-mana 2/1 creature like Jackal Pup would stick and be good for a beatdown deck in those days... but if he got to go first, Randy would be able to answer it with Force Spike. Of course, later in a game, Force Spike would be relevant any time the opponent would tap out.

Further, Randy played a ton of two-mana permission spells, from the iconic Counterspell to the time-buying Memory Lapse. He very frequently had a reactive spell to play on turn two, so his deck, with really only the one Rainbow Efreet (plus lands) to win, would not be so far behind from the first and second turns.

What might be subtle is that even though Randy's main tops up on only four mana, cards like Whispers of the Muse allowed him to tap six or more lands in a turn, consuming big chunks of mana later in games, rather than letting it sit around untapped while he waited for something to happen.

Have you got at least a basic grasp of hitting your land drops, and tapping most or all of it every turn, hopefully including the early ones? Let's take a moment to visualize mana curves, then and more recently:

George Baxter's Good Stuff deck was the most aggressive deck from the first Pro Tour.

If we graph the casting costs in Baxter's deck we come up with something like this: 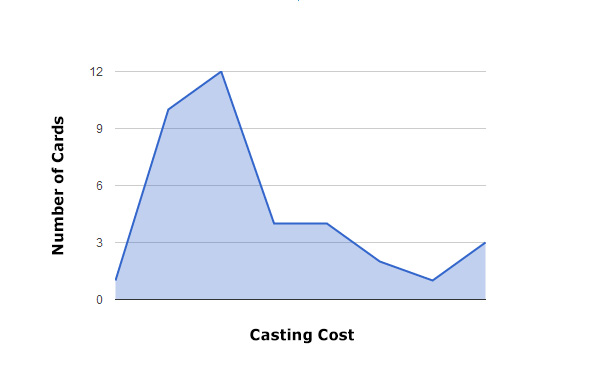 Baxter's deck cashes in a zero with Zuran Orb but its ten one-mana spells are actually fairly deceptive. Barbed Sextant doesn't really do anything, Dark Ritual doesn't do anything by itself, and Lightning Bolt is entirely reactive. Unless Baxter had the (admittedly dreaded) Dark Ritual + Hypnotic Specter opening... he probably wasn't going to do much on the first turn.

Now, between Hymn to Tourach and his eight copies of Knight of Stromgald and Order of the Ebon Hand, Baxter had a ton of things he could do—offensively and aggressively—on turn two; but turn one would pass without a play more often than not.

This is Paul Rietzl's deck from Pro Tour Amsterdam in 2010:

Contrast Baxter's curve—the curve of the most aggressive deck of the first Pro Tour—against Rietzl's 2010 model (for purposes of this illustration, in this deck Spectral Procession is always three mana): 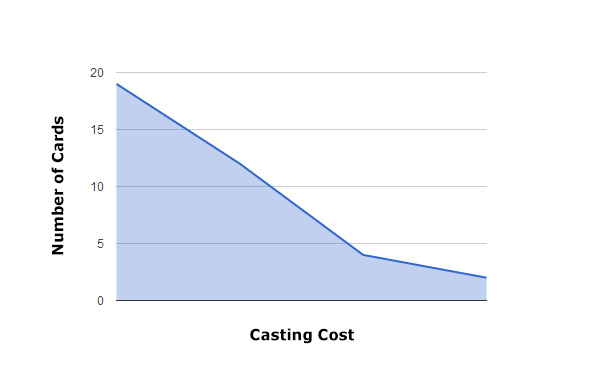 Paul played nineteen one-mana spells; twelve of which were Figure of Destiny, Student of Warfare, and Steppe Lynx—all very dangerous plays at that point.

In stark contrast to most other decks, Paul would (or at least could) make an aggressive play on the first turn in most games. Just as with our opening narrative of Gabby and the Tormented Hero, Paul could "get the jump" on his opponents starting on turn one, which could be a substantial difference-maker.

The mana curve of a successful deck doesn't necessarily have to look as tall-on-the-left, nor as steep, as Paul's.

What is important to take away is that decks with generally inexpensive cards can make plays earlier in games and take advantage of their resources and options in ways that decks with lots of four-mana spells never will. Building a deck with attention to the mana curve is just one way of thinking, but it is a technology and way of doing things that can potentially increase your flexibility by giving you access to more resources: both mana, that might have otherwise gone unspent, andthe utility of playing cards that might otherwise have been stuck in your hand.

Mana curve is generally a deck-building principle, rather than a game-play one... but the general notion of tapping all your lands each turn tends, all other things held equal, to be good Magic. 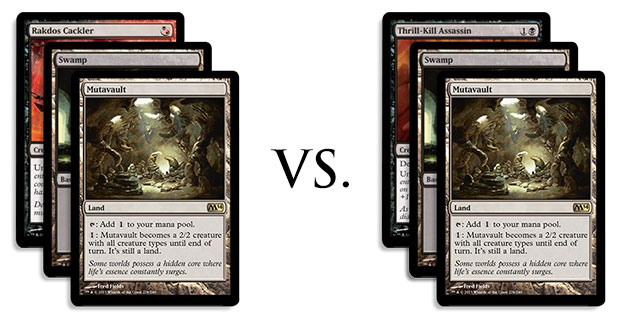 All other things held equal, if you have the option of unleashing a 2/X Rakdos Cackler versus a 2/X Thrill-Kill Assassin on an empty board, you probably want to tap for the more expensive creature. Other things might influence your decision (like having a Thrill-Kill Assassin already down against a WU player), but paying more on this turn for similar output can be helpful in many ways. (For example, the next turn you could make your land drop, play the Rakdos Cackler, and still attack with the Mutavault.)

Like anything else in Level One, the idea of making your land drops and tapping as much mana as you can is meant to be a useful guideline, not the be-all/end-all. Deep in the midgame, if you draw a land and it is your only card, you might want to hold it back to bluff, for instance.

Or if you have the choice between tapping all six for your Ætherling versus tapping four for Jace, Architect of Thought—but leaving two open for Negate in a similar deck matchup—(or even bluffing the Negate) I would guess your long-run results would be better waiting on the Ætherling in an overwhelming number of games.

But in the absence of specific information? Making your land drops, then tapping those lands—tapping out every turn if you can—while applying pressure to the opponent, is a much better model than not having a specific model at all.