I'm doing a mailbag column on #mtgm19. Send me single tweet questions you have about the latest core set. Thanks. #WotCStaff

As always, I'll try to answer as many questions as I can, but here's why I might not answer your question:

That said, let's get to the questions. And I know which one to start with. 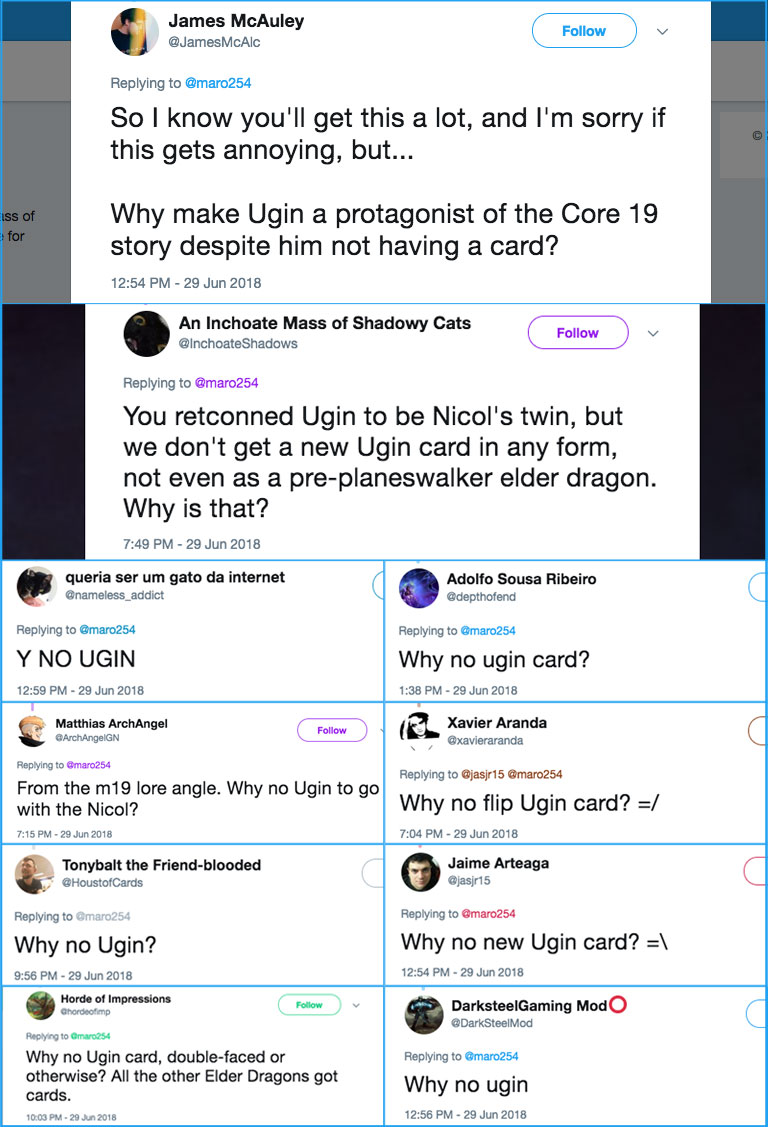 The short answer is when we were making the set, Ugin wasn't in the story.

The longer answer is when we were making the set, we weren't sure there was even going to be a story, at least not something exterior to the set. When we first broached the idea of bringing core sets back, one of the questions that got raised was, "Is it going to be part of the ongoing story?" We looked back at Magic Origins, the last core set and the one that attempted to be story-adjacent, and decided to use it as a template. Core Set 2019 wouldn't be a continuation of the current storyline, but we could use it to fill in some gaps about the past that would serve as a supplement to the story. Once we came to that conclusion, our focus became clear. Who's past was it most important to understand to get a larger sense of the ongoing story? The answer was pretty obvious—Nicol Bolas.

When Ethan Fleischer and his team designed Core Set 2019, their goal was to touch upon as much of Nicol Bolas's backstory as they could. They made sure that each Planeswalker included was someone who'd had an interaction with Bolas. They made sure to make cards that represented key moments in Bolas's life. They made the rest of the Elder Dragons as they were a big part of Bolas's past. The idea was that they would get as many pieces as they could about Bolas's past and then if someone wrote a story, they could use those pieces as components of the story.

The problem from a card perspective was this happened late in set design. (The idea to even write a story for Core Set 2019 happened late as the swap to a core set happened rather suddenly, and it wasn't something we traditionally did.) The planeswalkers had already been selected and fine-tuned and adding in a late planeswalker, especially a colorless one, created all sorts of problems—not to mention Ugin being a twin heavily encouraged his card to also want to be double-faced. The Set Design team talked about how they could do it, but found it was just too late in the process to be able to do it correctly. It was better, they decided, to have no Ugin than a poorly crammed-in one that was purposefully designed to be weak.

And that is why Ugin, who seems like such a perfect fit for the set, doesn't have a card.

If you'd like to learn more about this from the Narrative team's perspective, be sure to watch the episode of Weekly MTG featuring Principle Entertainment Designer Nic Kelman and Senior Franchise Art Director Daniel Ketchum.

The plan to center the set around Nicol Bolas happened very early, like within a few weeks of us even discussing returning the core sets. As far as Bolas's double-faced card goes, I believe Ethan wanted it in the set the moment he was told he was leading the set and it was about Nicol Bolas. It might have taken him a week or two to get signoff from everyone, but Bolas's double-faced card was a given for the set basically the entire time.

We definitely talked about it, but there was never a plan that I remember that had more than just one double-faced card. This was Nicol Bolas's set, and it felt like one card embodying his sparking was the perfect number. The issue with only having one double-faced card is mostly a financial issue. Usually if you're going through the trouble of having double-faced cards, you fill up the sheet with various cards, but as Magic Origins showed us, sometimes it's better to focus on your theme. Having one splashy Bolas card in a set all about Bolas didn't end up being much of a hard sell to anyone at Wizards.

The set design team tried various things, but sometimes simple just works the best. Bolas is a schemer who always plans ahead, so him being able to manipulate his own spark felt right. Also, note that this is the core set, so we wanted the premier card in it to be as straightforward as it could while still being as flavorful as possible.

The planeswalkers for Core Set 2019 were chosen because each one of them had an important interaction with Nicol Bolas. For the black slot, Liliana was the slam-dunk choice as not only are their pasts very intertwined, but it's super relevant to the current storyline. I don't want to spoil anything for those that haven't read the Dominaria story yet (which you can read here), but Nicol Bolas's relationship with Liliana plays an important role.

The goal is to make every rare something that someone is excited to open. Not every rare though has to be exciting for the beginner. Yes, many rares in the set are designed with them in mind, but we also want to encourage enfranchised players to play the set, and one way to do that is by including some cards, at higher rarities so the beginners see them less, that are useful in various older formats. Because the core set is the eighth set in Standard and has the smallest time in rotation, we've decided it's the best place to take some swings at cards for older formats.

There are a number of reasons. One, most legendary creatures do not synergize tribally with the creature type they are. Yes, there are a few exceptions, but they're the outliers. This is due to the fact that, a) legendary being a downside for the non-Vorthos, non-Commander players means that if a tribal card has any value being played in multiple, we purposefully avoid making it legendary, and b) we tend not to make tribal commanders if there aren't enough of that tribe to make a Commander deck. For example, there are only 20 creatures with the creature type Bear (I'm not counting Changelings) and seven of those are vanilla creatures. Two, the card was flavorfully trying to capture a specific character that was both bigger than 2/2 and storywise had no connection or leadership over other Bears.

The other issue is what I call the Mel versus Vorthos issue with legendary creatures. The Mels want the card to be as mechanically relevant as possible. The Vorthoses, though, want the card to be as flavorfully cool in a vacuum as it can be. They want Goreclaw to be as Goreclaw as possible and not necessarily as "Bear tribal" as possible. Every time we print a card, we can only make some of the audience happy, and this time, we erred toward the Vorthoses.

Now that we've made a very Vorthosian legendary bear, we open up the possibility of making one a bit more Mel-ish. While a lot of players really enjoy Goreclaw, Terror of Qal Sisma, I've heard from those of you who were hoping for something else. We have to find the right place for it, but when the opportunity for a legendary Bear that has a mechanical Bear relevance pops up, I promise we will make a legendary Bear more toward your liking.

This is another example of the set leaning toward the beginner side of the spectrum. Here's something we've learned through years of focus tests: most beginning players can't shuffle a deck. Yes, you get good at it after doing it for years on end, but before you have a need for this particular skill, it's not something most humans are good at. As such, we find shuffling to be a bigger barrier for new players. I've personally seen multiple new players give up in a focus test because too much shuffling was asked of them.

Because of this, Ethan and his design team made the decision to minimalize shuffling and keep it completely out of common. This isn't a change for all of Magic as much as one for the core set, although I should note though that we are trying to minimalize shuffling where we can, and you will see more "impulsing" (getting cards from a number of cards off the top of the library instead of searching through the whole library) woven into to normal Magic. We will still have some shuffling where necessary.

Not every mythic rare is designed with Limited in mind. This card is made for players to build a casual Constructed deck around. Do we expect players to have much success with Liliana in Limited? In Sealed, no. In Draft, if you open it early and prioritize taking Zombies, maybe it will work out some of the time. That's just not its main goal. 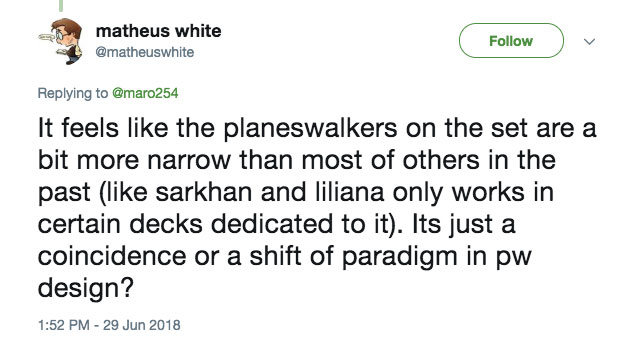 It's a conscious decision. Part of adding the core set back into the mix raises the overall amount of planeswalkers in Standard, so to help offset that, we're making some of the core set planeswalkers a little more niche than the average planeswalker. The idea being that they might still be tournament viable, but in a narrow range of decks.

That's all the time I have for today. As I got so many good questions, I'll be back with more answers next week. As always, if you have any comments on today's article or any of my answers or even just on Core Set 2019 itself, please feel free to email me or contact me through social media accounts (Twitter, Tumblr, Google+, and Instagram).

Join me next week for part two.

Until then, may you play a lot of Core Set 2019 and come up with even more questions.

This podcast is part four of a six-part series on the design of each and every non-Contraption card in Unstable.

This podcast is part five of a six-part series on the design of each and every non-Contraption card in Unstable.