Every set, I do a mailbag column or two where I answer all your questions about the new set. As I'm writing this, the full Rivals of Ixalan Card Image Gallery just went up, so it's time to answer a whole bunch of your questions.

I’m doing my #mtgrix mailbag column, so if you have any questions about the new set, please send them to me in a single tweet. Thanks. #WotCStaff

As always, I try to answer as many questions as I can, but here's why I might not answer your question:

With that out of the way, let's get to the questions.

The same data that led us to make the shift from the large-small-large-small set model to the large-large-large-core set model showed us that one of the reasons that small-small-large drafts weren't as much fun as just large-large-large drafts was that the need to not repeat cards was making us use worse versions of effects in the small set. Essentially, the first set would make the best version of a particular effect and then the next set would make the second-best version. Sometimes the differential in quality was minimal, but oftentimes it was a significant drop-off.

For Rivals of Ixalan, we decided to try the following: if we had a good execution and there was concern that a different execution would be a significant enough drop, we just reprinted the original. Note that we didn't do this on a lot of cards and we only did it at common. Had we not made the shift away from small sets, I believe this would have been common practice moving forward.

As for different art, we've found that in high-level tournament play and coverage, multiple arts can cause confusion, so we tend to not do multiple art versions in Standard-legal sets.

The cycle is based on a Lorwyn cycle and included reprinting Silvergill Adept. As we wanted the whole cycle to work the same and Silvergill Adept, as a reprint, couldn't change, we kept it as just a reveal-from-hand cost. In addition, while having a Dinosaur in play for Thunderherd Migration probably wouldn't have changed its cost, many of the other cards might have had to cost more with that added functionality.

Here's the issue at hand. Standard wants enough mana fixing that players can play various color combinations, but not so much that the divide between colors becomes meaningless and everyone is just playing the same grouping of powerful cards. As such, R&D has to regulate how many lands in the Standard environment can produce more than one color of mana. This means the lands must be carefully doled out over time. The result of all this is that while individual sets can sway the decision, the choices of when and where to print various lands is based on larger Standard concerns. Because we're trying to keep a general balance between ally and enemy colors, which cycle goes into which block is sometimes determined more by larger concerns than by the individual set's concerns. For example, Innistrad had an enemy dual land cycle even though the set had an ally tribal theme.

To the person who cares, that ball is the most important ball. How could this ball be dropped? Couldn't we have just dropped other balls instead? But behind the scenes, maybe that one ball was dropped because any other changes would have dropped numerous different balls, and this was the best compromise. I get how frustrating it is when the thing you care about was the thing that got dropped, but as someone who works behind the scenes, it's simply not possible to accomplish everything.

There are two things we try to be conscious of when we drop balls:

One, don't keep dropping the same ball to avoid repeatedly letting down the same type of player. And two, be on the lookout for future places (usually supplemental sets) where we can pick up the ball we dropped.

Every block has some tribal component, and tribal blocks, such as Ixalan, occur on a pretty regular basis, so I don't really see us upping tribal all that much. That said, one of the keys to finding innovations is always being willing to question things you've done regularly in the past. This can be done in any set, including ones with a larger tribal component. Take Ixalan block as an example. In the past, whenever we've done factions, we've made them of equal size and color combinations. Ixalan block played around with two of the factions both being bigger and hitting more colors, which led to a Draft environment where certain tribes had more Draft combinations. That's us being innovative within a tribal block, so the two things aren't exclusive of one another.

That's a lot of work, but yes, if you do all that, you can use Moonmist to transform Azor's Gateway (or any of the double-faced Ixalan block lands, for that matter).

Part of working on any set is doing internal research with non–Magic R&D folks at Wizards to see what in the set is exciting to the more casual crowd. With Ixalan, the data was very clear—DINOSAURS! So, Ben and his design team decided for Rivals of Ixalan to do something to broaden them a little. Much like we make a cycle of Dragons in a Dragon set (remember Dragons are normally red's iconic creature), they made a Dinosaur cycle. I believe the idea of them being Elder Dinosaurs came after the cycle was originally designed. This would allow casual fans who play blue or black to get their hands on at least one Dinosaur. Essentially, we threw casual fans a couple Dinosaur bones. 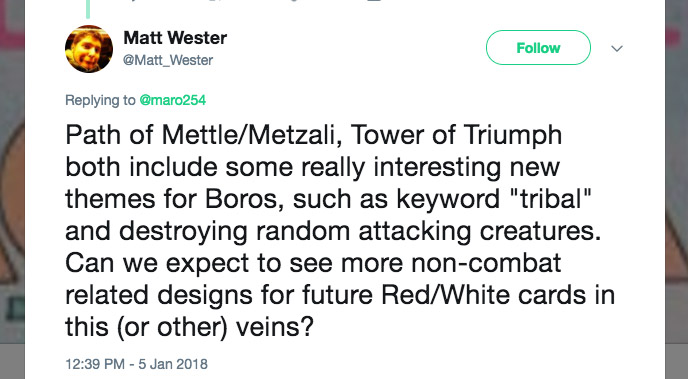 I get many messages sent my way. One of them has been a desire for more red-white strategies that aren't just aggressively attacking. We've heard you and we're slowly making some. Note that there are a lot of red-white players who enjoy aggressively attacking, so we're still going to be making those cards, but we're consciously trying to mix things up a bit.

It's hard to design cards for tournament formats larger than Standard that won't themselves be too disruptive in Standard, but we do make them occasionally, usually in one of two ways. One, we make a card for Standard and realize that it would work well in other formats, sometimes with a tiny bit of tweaking. Two, there are certain areas where we can push toward other formats in ways that aren't problematic to Standard, and we design those accordingly. The answer to your question is "when we can," which ends up usually being a few cards in most sets but more when the theme of the set has some synergy with older formats.

Once it was clear that we were making a double-faced card that turned into Gaea's Cradle and another that turned into Tolarian Academy, we thought about Serra's Sanctum. (Gaea's Cradle, Tolarian Academy, and Serra's Sanctum are part of a five-card land cycle from Urza's Saga, but the three cards work similarly to each other, and differently from the other two, so sometimes are thought of as a three-card cycle.)

What stopped us was that Ixalan block (and Standard in general) is not receptive to a heavy enchantment theme, which is what a Serra's Sanctum–like card would require. Ixalan is a tribal set, so Gaea's Cradle caring about creatures made sense, and the Pirates have an artifact-matters theme supported by things like Equipment, Vehicles, and Treasure tokens, so Tolarian Academy was also a good fit. And that is why there's no Serra's Sanctum–like double-faced card.

I'd call it a partial success. I really like what it did for the larger impression of the set and it allowed us to explore some design space we normally couldn't do in a faction set. It also just got more Dinosaurs and Pirates into players' hands and kept Draft from warping (in early playtests too many people were trying to draft Dinosaurs, for example). It's only a partial success, though, because it caused a huge amount of tactical problems for what we now call set design. Our systems assume balance, so things start falling apart when systems aren't balanced. Not all the problems had great solutions, so if we do this again (and I think we will), there's going to be a bunch of problem-solving to work through.

Another way to think of it:

We made one in Ixalan design. There were just other removal spells that worked better (Walk the Plank, for instance) and it got cut along the way. This is a similar explanation for why Theros didn't have a Hercules-like character. I'm not sure if the creative team ever toyed around with concepting one of the removal spells as Keelhaul.

What led to all the tribes making the tribe the win condition?

We purposefully tried to change the speed and strategy of all the tribes, but as tribal strategies push you to wanting to have a lot of the tribe in your deck, it's hard to avoid making attacking a component of the decks.

Here's the problem: This is a no-win situation for us. If we make the cycles four-card cycles, we get complaints from people like you who dislike cycles not being five-color, as that's what we traditionally do. But if we make them five-card cycles, we get complaints from the players who feel like we're not following the four-faction theme of the set. Essentially, there are aesthetic reasons for doing either, and part of the audience wants one and part of the audience wants the other. The reason we chose to do four-card cycles is that when we have an opportunity to do things differently than normal, and enough players will enjoy it, we steer in that direction because we have a lot of sets to make and we like them to feel different from one another.

That's All the Questions for Today

I've hit my word count, so that's all the answers for today. As always, I'm eager for any feedback on today's column, including any of the answers I gave or just about Rivals of Ixalan itself. You can email me or contact me through any of my social media accounts (Twitter, Tumblr, Google+, and Instagram).

Join me next week when I explain the essay questions from the Great Designer Search 3.

Until then, may Rivals of Ixalan bring you some answers as well as questions.

R&D started a new process called a "hackathon" where we take off a week and work on future speculative products. Today, I'm going to explain how it works and walk you through our first two hackathons.

I've often said the hardest part of my job is making cool things and then not being able to talk about them for a long time. This podcast is all about the joy of getting to finally tell people news through the lens of the fun I had watching...