Last week, I started answering your questions about Strixhaven. There were a lot of good questions left, so I thought I'd spend another column answering them.

Nowadays, I like to make sure I'm well versed in the trope space of every set. A big part of making resonant card designs is understanding what the audience will recognize. In the case of Strixhaven, there were several levels.

No. We really want to establish that colorless can mean things other than just the Eldrazi. While it was a good fit for Zendikar, there are a lot of other things we can do with colorless spells. For example, I really liked that, in Strixhaven, it represents the first-year classes that every student is forced to take. (You don't pick a college at Strixhaven until your sophomore year.) 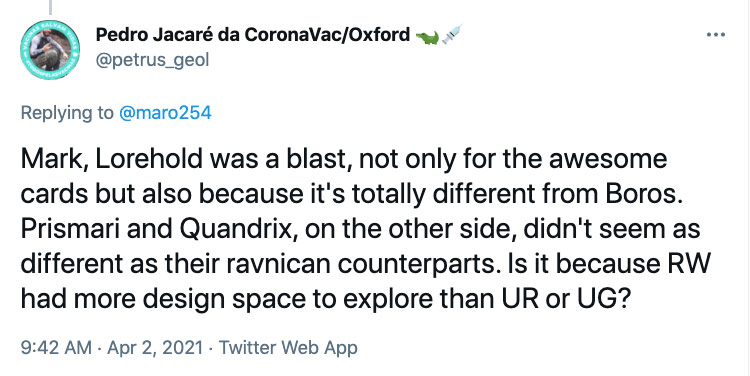 For starters, I'm eager for all you to play with the set, because I think Prismari and Quandrix are further away from Izzet and Simic, respectively, than you think. Prismari was the hardest one to separate from their equivalent guild because we're in a "spells matter" set, and the one guild that had that theme was Izzet. Izzet was a tempo deck very focused on making you cast a lot of instants and sorceries in a single turn, so we pushed in the opposite direction. Prismari is a control deck. The idea with Prismari is that you use your resources to stall until you can cast large spells with grandiose effects.

Quandrix uses +1/+1 counters to define the size of the Fractals, but that's just to allow us to play around with making variables matter. Simic is very focused in the counters mattering, and almost none of that is present in Quandrix.

I think there's another factor at play here, which you touched on. Red-white is the color pair that's most often represented the same from set to set. Red and white are the two most aggressive colors, so making a red-white archetype the aggro one in a set is just the easiest thing to do. Because we like having aggro archetypes and there aren't a lot of pairs that are great at it, we lean on red-white to do it quite a bit. That means when you see a red-white faction that's not doing that, it stands out more and seems more novel.

Green-blue, in contrast, is probably the color pair that has the most variance in archetypes from set to set, so no matter what we do, it's more like something you've seen before.

We started making our factions by figuring out what flavor matched the general philosophy of the color conflict. For example, once it became clear that red-white's conflict focused most on society (chaos and order deal with a larger system, and red and white are the colors that most care about relationships between people), we were intrigued by having it be the college that most cared about people. That led us down the path to it being the history college.

We then used the flavor as a jumping-off point to figure out mechanical execution. What should a faction caring about history be focused on? The graveyard, as it represents the past. We obviously realized it was a faction without black, but as we were purposefully trying to avoid the low-hanging fruit, we looked into what a red-white graveyard strategy would look like. Once we realized we could pull it off, we built the faction around it.

The Mystical Archive is us experimenting with using a bonus sheet as a way to supplement a Limited environment without having to impact Standard. If it's popular (and early signs are an enthusiastic yes), I'm confident we will make use of this resource in future sets. There's a lot of cool things we could do with it, so the designer in me is quite excited by the possibilities.

I don't believe we did. While there were story reasons to consider it (he's looking out for Rowan and Will at the end of the Throne of Eldraine story), the planeswalker color balancing didn't really allow it. Kasmina and the twins were core to the story, so that locked up green-blue and blue-red.

While the Tolarian Academy (seen in Urza's Saga block among other places) is Magic's previous exploration of the magical school genre, it came with too much preestablished baggage. There were enough challenges building an enemy color, spell-focused faction set without having to worry about not contradicting years' worth of references. 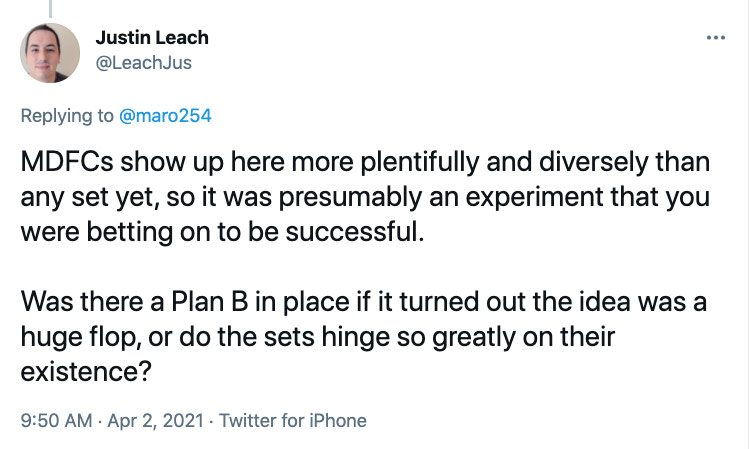 With the way the timing of Magic sets works, by the time we could get feedback on Zendikar Rising, the first set with MDFCs (modal double-faced cards), we were already pretty locked in with Strixhaven. If we had to make a change, it would have been without any new assets, meaning we would only use the art and frames that we already had, and we probably wouldn't have time to playtest it.

So, things would have to go disastrously wrong for us to even think about making a change, and even then, there's a limited number of things we could do.

Spirits are red because Lorehold is the history college and we liked Spirit tribal as a means to play into that, so the set has red and white Spirits. While the mechanics are locked to the color pie, the creative has more leeway if there is proper flavor justification.

That said, not counting Changelings, there are 45 red Spirits prior to Strixhaven, so it's not even that new of a thing.

Ah, the age-old Vorthos versus Mel creature type conflict. The Vorthoses want cool evocative creature types and enjoy seeing new ones, especially ones that are very flavorful to the world. The Mels want to maximize tribal synergy, so they want us to reuse existing creature types rather than make new ones.

We split the difference in Strixhaven (as we usually do) and did what we could to make both happy. Inklings and Pests were created because we couldn't find existing creature types that hit the proper flavor for the respective colleges, but we also brought back creature types like Dwarf and Efreet to help fill out tribes that could use more cards.

R&D always creates at least ten archetypes for any draft. With a multicolor faction set focused on enemy colors, usually we create five three-color archetypes that match the Draft strategy. For Strixhaven, as you're drafting enemy color factions, that means we make archetypes out of the five wedges (a color and its two enemies). This is because a wedge is the combination of any two colleges that share a color.

One of the things that we wanted was a keyword that makes it harder for the opponent to interact with a permanent, most often a creature, but still allows some interaction. Both hexproof and protection can often make a creature impossible to deal with.

We experimented with lots of individual card designs, and the one that ended up playing the best was something we called "frost armor" (basically ward for mana). We liked it enough that we started making variants of it, often for things other than mana. Eventually we reached a point where we said, "we're using this enough; let's just make it a keyword." We figured out how to make it more open-ended so that we could use different costs, and we got it a name. Strixhaven was just the next set once we finalized this.

The idea of them being Fractal creatures predated them being 0/0 with +1/+1 counters, so I guess top-down. In vision design, Fractals were all 1/1 creature tokens and most spells that created them made multiple.

As I explained when Zendikar Rising came out, MDFCs were a thing we were running through the three premier sets (well, the non-D&D ones) to give the Magic "year" a cohesive feel. While they might return one day, we are done with them for a while.

It was the last element added during set design. My best guess (although I wasn't on the team) was about midway through set design.

That depends a lot on how you all feel about it. If you enjoy us pushing in new directions with our Draft archetypes, let us know. It's definitely something we can do.

The tide is turning. The Squirrel haters are gone, and it's a bright new squirrely day.

We knew Kasmina was going to be tied to the magical school world from her very creation. Notice her War of the Spark planeswalker card has a Wizard-making ability. For a while, we did consider having Kasmina play a role in the Throne of Eldraine story, filling the role of a Merlin-like character, but that changed as the story got fleshed out.

There's been a conscious shift on the Creative team that we can be a bit more lighthearted (where appropriate) with creative text (aka names and flavor text). It's a change I'm quite happy to see.

It's time to wrap up this mailbag column. I want to thank everyone who took time to send in a question. I'm sorry I couldn't get to them all. If you enjoy asking me questions, I do this every day on my blog, Blogatog.

As always, I'm eager for any feedback on any of my answers or on Strixhaven in general. You can email me or contact me through any of my social media accounts (Twitter, Tumblr, Instagram, and TikTok).

Join me next week when I reveal the handoff document for Future Sight.

Until then, may you enjoy "going to class" at Strixhaven.

I sit down with former Magic designer Tyler Bielman to talk about the design of original Mirrodin.

One of the very first podcasts I did was on Magic codenames. Well, enough time has gone by that I had 30 more minutes of codenames to talk about. I explain how we named them and share some stories.