To start off this week, I'd like to talk about a hand I had recently playing Duels of the Planeswalkers 2013 .

I was playing the Goblin Gangland deck against the Into the Mine encounter. The Into the Mine encounter mostly just plays cards like Howling Mine (which can just feed the offense of a leanly costed Red Deck) and Fog Banks (which don't kill you at all). Into the Mine has 100+ cards and tries to exhaust your library with Howling Mine; it's great, illustratively, because a deck like Goblin Gangland can just come out and do its thing and try to focus on taking the best proactive approach.

Think for a moment how you'd approach a hand like this one:

Which would you plan to play on turn two? Goblin Piker or Krenko's Command?

How about on turn three? Goblin Chieftain or Goblin Warchief?

Last week, in "Strategy," we talked about sequences, predictable results, and repetition. Cases like this opening hand can be very helpful for us, because, for one thing, the sequence, or order we play our cards in, can have some important impacts.

On turn two, Krenko's Command competes with Goblin Piker; as we said, the two, two-mana cards will give us seemingly similar results (2 total power on the battlefield and a toughness threshold of 1). At face value, the plays don't have a lot of differentiation.

However, I would argue that based on the rest of our hand, one of these plays is going to give us substantially and predictably better results than the other. 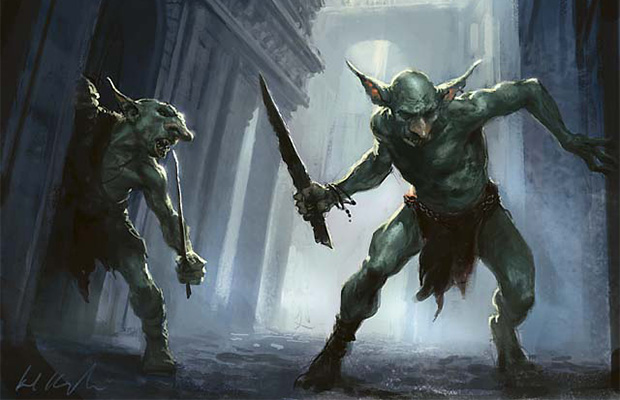 There are two reasons why I feel Krenko's Command is the superior play on the second turn.

The first is that if we follow up with Goblin Chieftain, Krenko's Command on the second turn will give us 6 attacking power on turn three; whereas Goblin Piker will only give us 5 attacking power. By committing a predictably identical amount of cards and mana (planning for five mana over two cards we already know about) we get 1 more damage, all other things held equal. Contextually, Into the Mine plays Fog Bank, and Krenko's Command is better against a single non-killing blocker than the Piker (which would be entirely contained)... but I'm not actually arguing that for now.

The second is that we are going to play Goblin Warchief at a point where most or all of our mana is going to be committed. Even if we play Goblin Chieftain on turn three, by playing Krenko's Command on turn two, we will set ourselves up for a position where we save a mana in the future; we are predicting that based on information we already have. On some future turn where Goblin Warchief is already on the battlefield, Goblin Piker will only cost us

, whereas Krenko's Command (not actually a Goblin, rather a maker of Goblins) will cost the full

What about the third turn?

I know that the first argument I made around Krenko's Command was that we could exploit more damage in concert with Goblin Chieftain, but I didn't ultimately make that play.

I am going to tip my hand and tell you that despite Into the Mine's Howling Mine, I was not able to pull a fourth land for turn four; I was able to win the game on turn four with just the three Mountains, and I don't know if that would have been the case if I had played Goblin Chieftain rather than Goblin Warchief... especially given some defensive Fog Banks!

Let's sketch out our possibilities with just these cards, assuming we stop on three lands.

Without playing a fourth land, we can deal 15 damage unopposed.

This configuration allows us to access one more card and deal 1 more point of damage by turn four.

It turns out that while I missed my fourth land drop, I did draw Goblin Grenade and Goblin Piledriver. With its protection from blue, Goblin Piledriver was especially an important threat given Into the Mine's Fog Banks, and I got it down for just

because I had invested in Goblin Warchief on turn three, allowing me to deal more than 20 damage despite Fog Bank resistance.

But I didn't have to know that I was going to draw these explosive threats!

Playing Krenko's Command early was very predictably going to save me a mana.

That mana, cashed in on turn four, predictably allowed me to get an extra point in, and play another card.

It is definitely, Definitely, DEFINITELY the case that the opponent's play can and should alter our strategy (say he or she plays a 1/3 creature instead of a Fog Bank... the extra point of toughness Goblin Chieftain gives other Goblins suddenly allows them to live through combat on turn three), but given the information we started with, and how our gears started to turn at first blush, we could formulate better, repeatable sequences from the opening seven.

Welcome back to Level One! 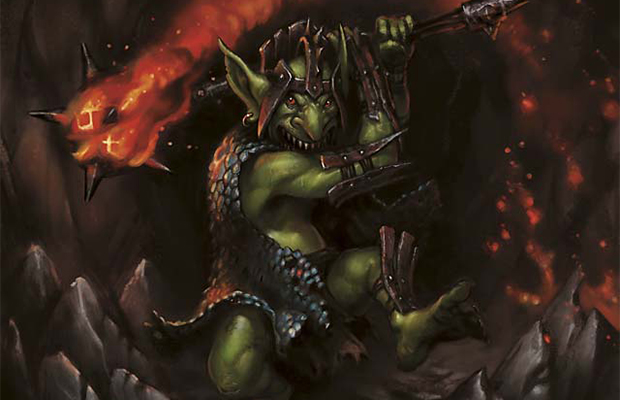 In our first installment, we talked about the concept of Strategy; this week we are going to talk about Strategies (plural) in the same. As in competing or different strategies. The decisions we faced on the second and third turns in that game of Duels of the Planeswalkers 2013 —even when the two three-mana 2/2 haste-and-giving-haste options seemed so similar—could have led us down many different paths, depending on what the opponent did and what was on top of our deck.

Because here's the Big Reveal: There is only one viable end goal in Magic (or at least competitive Magic).

To successfully conclude the game before your opponent does.

This one principle is why Goblin Warchief over Goblin Chieftain (in general) can matter. Magic games have structure, and many games look similar, but I don't know that I've ever played two that were exactly the same. One point can translate into a turn—or more than one turn given the defensive capabilities of the opposing deck. Fast and powerful decks will often kill you outright if you give them a single free turn.

If our goal is to successfully conclude the game before the opponent does, in very close games, we have to acknowledge and respect that one point.

What "successfully conclude" means is going to vary from instance to instance, but it will generally be some variation on dealing 20 damage, exhausting your opponent's library, or applying ten poison counters.

In a sense, every single game of Magic is a race.

We don't necessarily think of them (all) in these terms. What about last week's example of Upheaval-Psychatog? Didn't we say that the big turn was circa turn ten? And even then, assuming it had hit nine consecutive land drops?

You might remember the inclusion of some inoffensive cards like Repulse and Chainer's Edict. Even if the Green-Blue Madness deck of the era could start on Basking Rootwalla, follow up with Wild Mongrel, and attack with both on turn three while discarding Arrogant Wurm for +1/+1 (4 total damage, 5 to date, but threatening at least 7 damage the next turn across three bodies, 4 of it trampling and the other 3 with built-in buffs)... that draw could be stymied by such defensive spells.

Remember what Neil Reeves said in that Masters match with Ken Ho:

Magic strategies can be seen as the push-and-pull of simply trying to kill the opponent as quickly as possible versus killing more slowly, but interacting with the opponent's cards along the way. There are incentives and disincentives to both styles of competing strategies.

Even Goblin Gangland might pause and spend two mana to cycle a Gempalm Incinerator. If that Gempalm Incinerator destroys an important blocker, the deck will likely win faster than if it spent the same two mana on an offensive creature (in much the same way delaying 2 points from Goblin Chieftain applied to Krenko's Command for a turn actually nets you a point of damage the next turn).

It is very difficult to be "wrong" with a proactive strategy. Pro Tour Champion David E. Price once said, "There are no wrong threats, only wrong answers."

While it is possible to be "wrong" with answer cards (you can't Smother an Arrogant Wurm, and pointing a Ghastly Demise at an attacking Wild Mongrel will be generally disastrous), reactive/answer-laden decks tend to be able to accumulate more resources than their proactive counterparts. Many players tend to associate resource accumulation with power, and slow decks tend to be more flexible than their faster cousins.

In Next Level Deck Building, Patrick Chapin argues that there are four macro archetypes of decks (beatdown, midrange, control, and combo). Although this column will pay respect to the four-family model some months from now, I have long argued for a simpler two-incentive one (control vs. beatdown, where "beatdown" need not actually be beating down, simply the active deck). I would encourage you not to worry about which (if either) is "true" and rather try to figure out what is useful for you and best helps you improve your own game.

When you consider the three or so most popular Standard decks of the last several months—Mono-Blue Devotion, Mono-Black Devotion, and Esper Control—you can see this notion of trying to successfully conclude the game before the opponent does at some of its clearest.

Mono-Blue Devotion is "the beatdown" deck of the three. It wants to commit to the board and come out offensively, and just hit and hit (although sometimes building advantages and resources with Bident of Thassa or Nightveil Specter). Mono-Blue Devotion has many routes to a huge/lethal turn five.

Esper Control is, by default, "the control" of the three. Its wins are very slow. Its "fast" way to win might be an Ætherling, which it would only sorely commit before turn seven. Esper Control doesn't want to win quickly so much as slow the pace of the opponent's win to a crawl... Last Breath after Supreme Verdict, Dissolve buying time for a big resource-building/offense-blunting Sphinx's Revelation. Esper Control wants to ask how many cards the opponent has come turn twenty-eight, grin at the tiny number proffered, look down at the empty battlefield, and know that its turn thirty-odd win is still faster than "never."

Mono-Black Devotion is faster than Esper and more controlling than Mono-Blue Devotion. Its many removal cards are not wholly controlling (it can fall behind a truly wealthy number of creatures from, say Assemble the Legion or the wrong Pack Rat, lacking, say, a Planar Cleansing). And while its threats are potent, it can get maybe one good swing in by the time Mono-Blue would have been killing a helpless opponent. But Mono-Black Devotion can give us great insight, strategically, because of how it can shift its position. It can get that much more controlling when the situation demands (bringing in more Duresses in place of permission, seeking to match Sphinx's Revelation with Underworld Connections, the God of the Dead, or his Whip); or it can move to gain greater initiative, getting faster to race. Mono-Black Devotion will often bring in Lifebane Zombie against Mono-Blue Devotion, because a 3-power unblockable threat that sometimes snags a Judge's Familiar will shorten games. Knowing its controlling upper hand over Mono-Blue Devotion will rarely be permanent, with cards like Thassa, God of the Sea or Bident of Thassa capable of reversing "who's winning" at any point... Mono-Black Devotion's best strategy might be to win before the opponent can come back.

Any successful strategy in competitive Magic is going to have to know how and when the likely opponents win, to ensure it can win first.