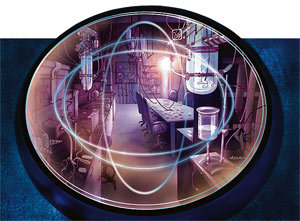 interviews and in this very column I have given some clues about what Lorwyn has in store. My biggest and most cryptic clue is that Lorwyn is going to break a rule we've never broken before in the fourteen years we've been making Magic. A big rule. Something that will make this block unlike any other.

How big? So big that later this month we have to tell our distributors because it's going to affect how they order the next year's worth of sets. What does us telling our distributors have to do with anything? Well, once the news goes out to our distributors, we know that the cat will be out of the proverbial bag. So we decided to tell all of you before we tell our distributors (okay, maybe one or two of them read my column). That's what I'll be doing today: spilling Lorwyn block's biggest secret. I'm guessing most of you didn't expect that when you turned in.

Do You Want to Know a Secret?

All right. Why don't I start with a little quiz? I've hidden the rest of the articles' text as to let you guess before reading on.

How many sets are going to be released between September 2007 and August 2008?