While we are waiting to see the full impact of Kamigawa: Neon Dynasty on the Alchemy metagame before making balance changes there, we are taking this opportunity to buff the Zombie deck and other cards that are agnostic of Kamigawa: Neon Dynasty set-specific themes. The overarching goal of the Zombie buffs is to strengthen the decayed mechanic. Since the more generic Zombie build-around cards, such as Champion of the Perished and Bladestitched Skaab, are in line with other creature-themed deck rewards, we instead chose to strengthen the Zombie-specific mechanic that separates Zombie decks from other creature-themed decks.

We are also aiming to adjust Town-Razer Tyrant's play rate and win rate as it is a staple in multiple top decks in Alchemy, and we are rebalancing and unbanning Fires of Invention in Historic.

Cobbled Lancer
Ability costs 1U (from 3U) 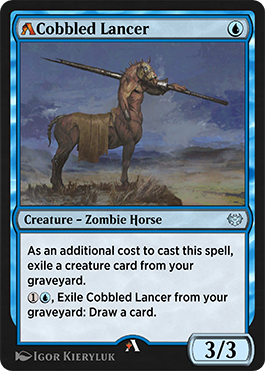 Death-Priest of Myrkul
Removed mana cost from the triggered ability, now 3/3 (from 2/2) 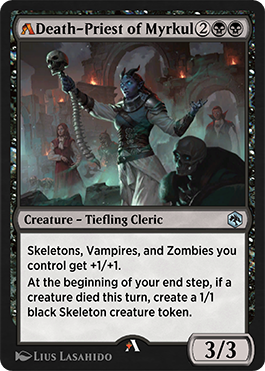 The mana gate on the triggered ability made Death-Priest of Myrkul a weak turn-four play, as it could not immediately create a token when used in decks utilizing decayed. The power and toughness increase will also help insulate the Zombie deck from 2-damage board wipes, which are often used to beat creature-themed decks that rely on creatures with lower power/toughness. 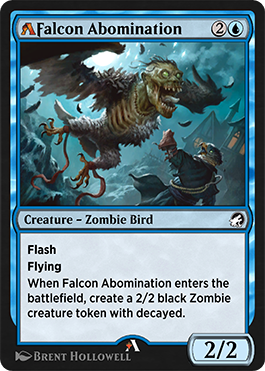 Overcharged Amalgam was difficult to play in Zombie decks because so many of the Zombie-themed payoffs are best played on your turn. We are aiming to give another option to play alongside Overchaged Amalgam by introducing an instant-speed threat to deploy if Overcharged Amalgam doesn't have good targets to counter.

Hobbling Zombie
Costs 1B (from 2B) 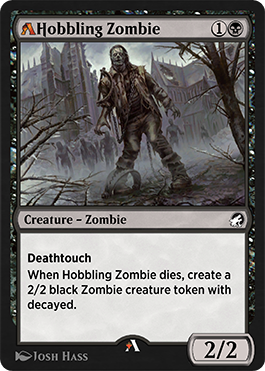 Most decayed token generators require a specific condition, like Ghoulish Procession, or a significant mana investment, like Tainted Adversary. Reducing Hobbling Zombie's casting cost will give another cost-effective and reliable source of decayed tokens alongside Jadar, Ghoulcaller of Nephalia. 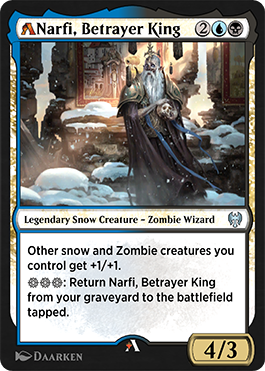 Narfi, Betrayer King's reanimation ability is the strongest part of the card, but as a result, decks would often try to discard or mill Narfi and actively avoid casting him. Reducing the casting cost will make it less punishing to draw Narfi when he is unable to be milled or discarded and strengthen its role as an answer to board wipes for the Zombie deck. 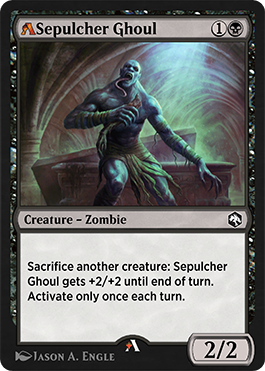 Sepulcher Ghoul was too harshly countered by expendable tokens and creatures such as Cursebound Witch and Eyetwitch. Giving it a second toughness will let it get into combat much more by profitably attacking through 1- and 3-power creatures. 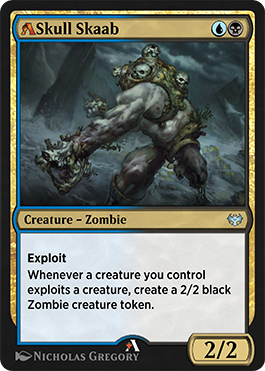 Decayed tokens are often the best creatures to exploit, but Skull Skaab would be too repetitive in Limited without the nontoken restriction as players would almost always exploit a Zombie token and replace it immediately. Since this change will not affect Limited, we are able to remove this restriction and provide another option to play with the decayed and exploit mechanics together. 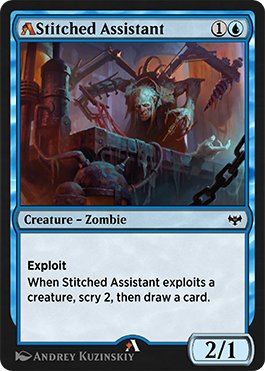 At three mana, this card was overshadowed by Fell Stinger. Since drawing multiple Fell Stingers can lead to awkward draws, we chose to move it to two mana to be a more efficient but less powerful card-advantage option alongside Fell Stinger. 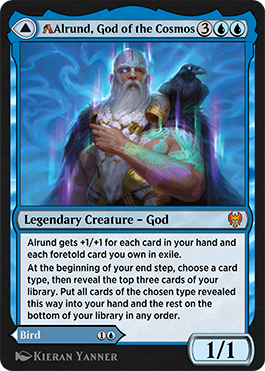 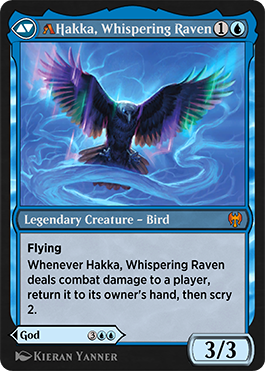 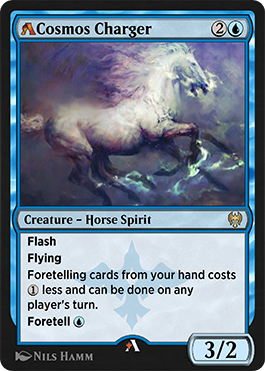 While individual foretell cards have proven to be strong, building around the mechanic is too inefficient. Making Cosmos Charger cheaper will help subsidize the expensive mana requirements of the foretell mechanic, and a mana-efficient Cosmos Charger will have the potential of being a threat for disruptive aggro decks. 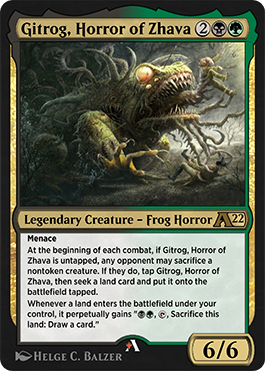 Gitrog, Horror of Zhava is effective at generating card advantage but is not much of a threat against the metagame's more common token producers, such as Wedding Announcement and Ranger Class. We are aiming to make GItrog a more reliable win condition by increasing the opponent's cost when denying it from combat. 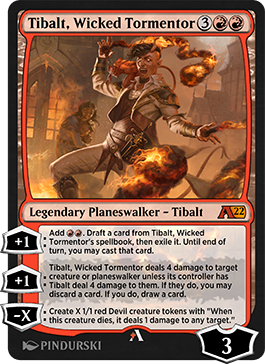 Since Tibalt, Wicked Tormentor is not an aggressive card, opponents were too easily able to take the 3 damage from the second ability. We are aiming to make the second ability more balanced with the other two abilities by increasing the range of targets it can destroy, making it more punishing for the opponent to take the damage. 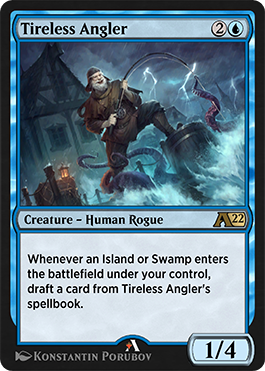 We felt Tireless Angler triggering off Swamps would be a flavorful addition that would also allow the card to see play in more decks.

Sinister Reflection
Costs 1U (from UU) 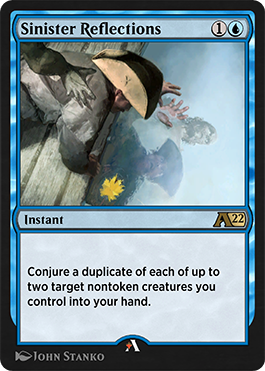 Previously, Sinister Reflection was effectively restricted to mono-blue creature decks. We are aiming to expand its applications by making it easier to include in multicolor creature decks, perhaps Zombies or Ninjas! 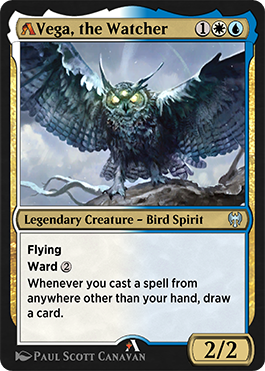 Vega, the Watcher was too fragile to reliably build around mechanics like foretell and flashback. Giving Vega, the Watcher ward 2 will make it a safer turn-three play and better reward players who wait until a later turn to get immediate value with Vega. 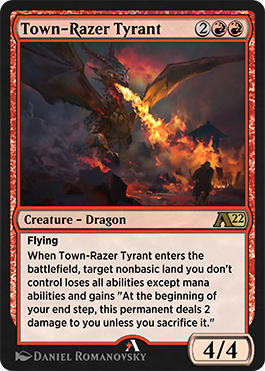 Town-Razer Tyrant was needlessly punishing creature decks that mostly operate at sorcery speed. Adjusting the timing of the trigger will give decks a full turn to use the land at no cost and more information before deciding whether to sacrifice their land.

Fires of Invention
Costs 4R (from 3R), unbanned in Historic 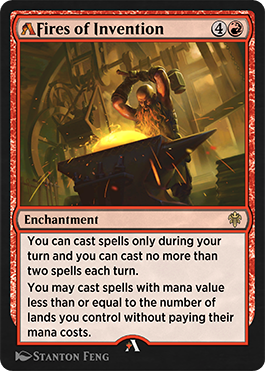 Fires of Invention is an exciting card to build around but was able to generate too much mana too early in the game. By delaying the card one turn, we are aiming to lower the ceiling and better align it with the deck-building cost of the card.