Jace, the Best of All

A few weeks ago, Blake Rasmussen, who runs our preview plans, showed me possible preview cards for Double Masters and asked me which one I wanted. I knew I wanted to preview a Planeswalker. I didn't pick just any Planeswalker—I got to pick to preview the most powerful Magic planeswalker card ever printed. Unlike how we previewed this card back when it debuted in Worldwake by printing a giant, oversized card, cutting it up, and shipping pieces all around the world for players to find, today, we will just show you images of the two versions of Jace, the Mind Sculptor that you can find in Double Masters.

Jace, the Mind Sculptor debuted in Magic a decade ago and was the fourteenth unique planeswalker card printed in Magic. At the time of his reintroduction in Worldwake, Jace was one of players' favorite Planeswalkers in many players' favorite color, blue. Unlike today's sets that typically have three to five Planeswalkers, Worldwake would feature Jace as the sole Planeswalker. As the lead developer (now known as final designer) of the team for both Conflux and Worldwake, we had accomplished this once before when we created Nicol Bolos, Planeswalker in Conflux, but unlike Nicol Bolas, this would be the second Jace card printed, which had unique challenges of its own. How could we make a Jace that stood out from Lorwyn's Jace Beleren yet delivered on what our players loved about Jace?

In addition to the task of focusing Worldwake on a single Jace Planeswalker from a game design perspective, we were working with the Creative team to make this new Jace awesome. Much like the selection of Nicol Bolas to headline Conflux, we specifically chose Jace as we were developing him to be a key Planeswalker when working to achieve the brand's franchise and media ambitions. Originally, we had planned the Planeswalker focus with Future Sight (as detailed in Mark Rosewater's 2007 column here), and now that Planeswalkers had become a reality, we knew we needed to do star building for our Planeswalkers. Introducing Planeswalkers as powerful focal points of major set releases was the path forward to put our Planeswalkers front and center in people's minds when they thought about Magic.

I spoke with Ken Nagle, the design team lead for Worldwake, about Jace and what his team worked on for Jace before handing it off to my final design team.

"We knew we wanted him to be the first four-ability mono-blue planeswalker. We wanted a four-ability planeswalker that could somehow combo with itself. I knew he would be put through the ringer in final design and playtesting but tried to capture Jace's essence. Jace, up to that point, was milling opponents to death, so we made sure he could do that. Also, I made that mind wipe ultimate since that's what he does to his teacher, Alhammarret, in Magic story. We knew he was an important card to the set as the only Planeswalker, so we didn't hold back."

Here is the original design for Jace, the Mind Sculptor:

This was the design that Ken's team handed off to the Worldwake Final Game Design team. Our Worldwake team consisted of Erik Lauer, Mons Johnson, Scott Johns, Tom LaPille, and myself as the lead. For each Magic set, we would conduct a rare poll to get feedback from all the Magic players at Wizards. From that rare poll, it was clear that the Jace above, while reasonable, wasn't hitting all the aspirations we had for him.

When this occurred for Planeswalkers, I would reach out to the game designers and start getting suggestions for different planeswalker card abilities. Being a four-ability planeswalker made this additionally challenging because it meant we were both designing a single card that has great synergy while trying to make four individually cool mechanics. Devin Low wrote a great article about our design philosophy for Planeswalkers back in 2007 called "The Nineteen Principles for Developing Planeswalkers" that captures the challenge of creating Planeswalkers.

Knowing that the original design wasn't exactly right for Jace, we had the Final Design team in the room for hours, poured over the suggestions, and came up with this:

Jace, the Mind Sculptor
{2}{U}{U}
Legendary Planeswalker — Jace
3
+2: Target player puts the top two cards of his or her library into his or her graveyard.
+1: Return target creature to its owner's hand.
-1: Draw four cards, then put three cards from your hand on top of your library in any order.
-8: Exile all cards from target player's library, then that player shuffles their hand into their library.

Here you can see that this attempt had three of the four abilities closer to the final version, although the numbers were changed around along with the first ability. As we playtested Jace, a few things became obvious. Within a few weeks, we moved around the bouncing of creatures from a plus ability to a minus ability and pulled back the third ability to match up with Brainstorm (and moved it up to the second ability and turned it into a 0). Personally, I remember being a big fan of Jace casting one of the most iconic Magic spells because it was powerful, resonate, and meant that our Planeswalkers had been wielding the same Magic as players.

In a world where Bloodbraid Elf was dominating, for Jace to be competitively relevant, he would need to be able to survive a hit from Bloodbraid Elf. It was clear that this meant a more relevant +2 ability would be needed. This would allow for the Jace player to cast Jace on an empty board and protect Jace against Bloodbraid (although Cascading into Blightning would still be very advantageous to the Bloodbraid player). We switched Jace's first ability to "+2: Look at the top card of target player's library. You may put that card on the bottom of that player's library." We liked that this new first ability had built-in synergy with the Brainstorm ability. I also felt that this type of controlling ability is what attracted players to play blue from the start.

Jace's debut in Standard was in a good spot while Bloodbraid Elf was around in the format. For instance, in the first Pro Tour event where Jace was legal, he only had three copies in the Top 8 of the event. The problems with Jace's power level really became evident once Bloodbraid rotated out of Standard. Being a new card type and created in one of the most powerful Standard environments of all time turned out to be problematic, and Jace eventually would be banned in Standard. (For a deeper look at some of the best decks of that time period, Randy Buehler took a look with his article "Throwback Standard Gauntlet 7: Worldwake".) While we didn't end up hitting the card where Standard would have wanted it to be for the best Standard environment long term, Jace certainly became even more iconic after Jace, the Mind Sculptor was introduced and has proven to be a format staple for many of our older formats.

The Creative of Jace 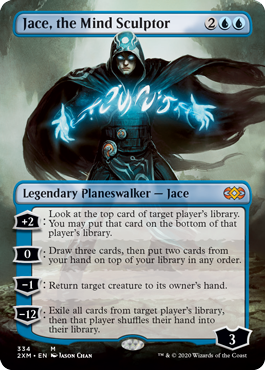 What an amazing image! Personally, I love it so much that I have an artist print from Jason Chan hung on the walls at my house. To take a look at how it was created, here is the art description that Worldwake Art Director Dawn Murin provided artist Jason Chan during Worldwake art development.

Color: Blue
Location: Outdoor Zendikar location, perhaps with the human settlement (style guide pg. 40a) in the background
Action: Show the Planeswalker Jace Beleren (see ref.) facing the viewer in an active pose. He's a young, brilliant mind-mage, about 24 years of age. He's a little too smart for his own good—not smug or smarmy, but wise for his age—his eyes have seen a lot that he shouldn't see. That gives a little old-soul edge to his young-mage-badass persona. Show him with his characteristic hooded cloak, with his hands glowing with blue magic.
Focus: The Planeswalker Jace
Mood: A young master of deception and manipulation

To me, part of the brilliance of the piece is how Jason Chan interpreted "his hands glowing with blue magic" to capture what being a powerful mind-mage would look like as he wielded his powers. Seeing Jace standing on Zendikar casting his spells still captures the feel of that sole Planeswalker featured in Worldwake when we created the card a decade ago.

As we had already provided an alternative look at Jace, the Mind Sculptor in Mythic Edition, Tom Jenkot, art director for Double Masters, and I decided to go back to the original Jason Chan piece. Tom says, "This set is full of amazing cards with AMAZING art. After I was assigned Double Masters, I kept asking myself: how do I beat Jason Chan's version of Jace? With this one in particular, I decided not to. And it looks amazing borderless!"

I hope you enjoy getting another chance to play with Jace, the Mind Sculptor in both Limited and Constructed. With some of the most powerful cards in Magic included in Double Masters and two rares in every pack, I'm excited to see if Jace remains as dominant a Planeswalker as when he debuted a decade ago. Let me know your thoughts on Twitter (@mturian) and check out my other Double Masters article talking about how to get Jace and all of the amazing borderless cards in foil in VIP Edition.