Commander Legends features one new keyword mechanic: encore. Like many things in this set, encore is effective in two-player duels but really shines the more opponents you have. Creatures with encore get one last hurrah, a final opportunity to wreak havoc before leaving the game for good. 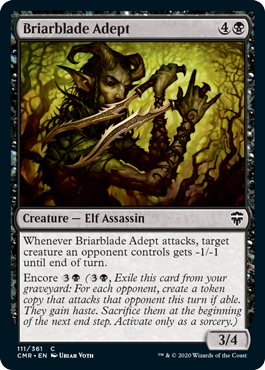 Encore is an activated ability that can be activated only if the creature card that has it is in your graveyard. So, hopefully it did some damage before it ended up there. You activate encore abilities only as a sorcery, meaning during your main phase when you can normally cast sorceries, creatures, and other non-instant spells. Pay the listed cost and exile the encore card from your graveyard, and let the fun begin.

For each opponent you have, you create a token that's a copy of the exiled card. Each token must attack the opponent it's associated with if able. To facilitate that, the tokens gain haste. If they survive all the way to your next end step, you'll sacrifice them then. But before then, the tokens can do a lot. Some encore cards, such as Briarblade Adept, have attack triggers waiting to go. Some have enters-the-battlefield or dies triggers. In any case, the tokens will also have those abilities for some added punch.

As we said before, each token must attack the opponent it's associated with if able. This means they can't usually all gang up on one opponent or go after planeswalkers. If they can't attack—say because they get tapped before combat or there's a cost for them to attack—they just don't attack. In some situations, they may not be able to attack the opponent they're supposed to but can attack another opponent or opposing planeswalker. That's awesome, actually. They're free to do so.

Encore will have you cheering and your opponents reeling. Bravo!