The College Cup Is Here for Strixhaven

The College Cup is underway now! Follow all latest updated from @MTG_Arena and check out all the details below to do your part to earn points for your college!

Anddddd Witherbloom has pulled ahead in the College Cup!

But not by much! Silverquill is just behind and the rest of the pack are neck and neck. Looks like no one’s backing out, so be sure to jump in and lead your college to victory! pic.twitter.com/YDC24qpmee

Greetings, mage-students of Strixhaven University, and welcome to the College Cup!

At this annual competition, mage-students from Strixhaven's five colleges clash to earn prestige for their chosen college. This is your chance to represent your own college in magical competition and change all of Magic: The Gathering Arena itself! Read on to see the current standings and find out how you can join in on the competition.

The College Cup consists of three events that will challenge you to create decks in unique Standard formats to test your mastery of magic within the halls of Strixhaven University. Each event will run as scheduled below:

Each event features the same entry options and method of play:

Course Length: Pass style—play as much as you want until the event ends.

Each event is Best-of-One, and for your first event win each day, your Strixhaven college-themed sleeve, avatar, and pet will earn points for that college. You may even split points among multiple colleges if you wish to double or even triple major at Strixhaven.

Here are the points you can earn for your college for your first win each day:

As you can see, each event will be worth more points than the last, and at the culmination of the final event, the highest-scoring college will earn a special card sleeve featuring their emblem for everyone on MTG Arena! 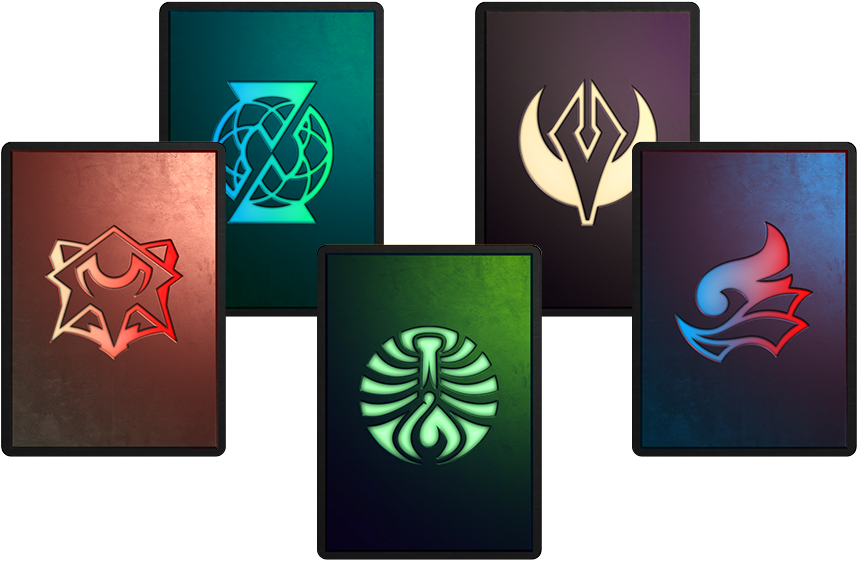 That's right, we're giving you the chance to change MTG Arena. Will the stylish and driven among you elevate Silverquill eloquence? Or will all the adventurer-historians of Lorehold rise up to reign supreme? It's up to you to lead your favorite college to victory!

In addition to the sleeves, the winning college will take over all of MTG Arena after the College Cup. For instance, if the passionate and artistically minded among you prove that the Prismari have the most school spirit and spellcasting prowess, MTG Arena will join in on the Celebration! 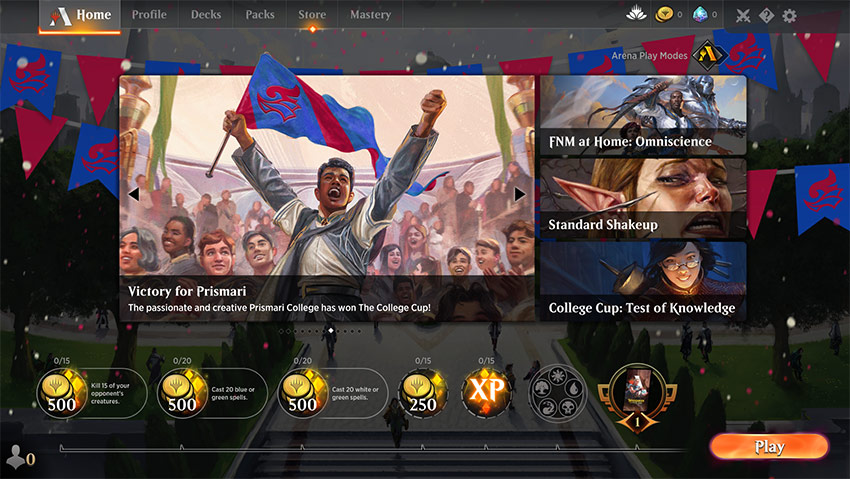 First, we have the Test of Knowledge. This format is Standard Singleton, which means you can have at most one copy of any card in your deck (excluding basic lands), but with a twist: Archmage Emeritus will be overseeing this test. Whenever a player casts or copies an instant or sorcery spell, that player will draw a card!

So Quandrix, bring your most complex mathematical proofs, and Silverquill bring out your most silver quills, as this measures the craftiness of mage-students and is sure to create some powerful sorcery—in an instant!

Second, we have the Test of Wit. This format is 100-Card Treasure Standard. This is Standard but with a minimum deck size of 100 cards. Not only that, but each player will create a treasure token during their upkeep.

This will test your capacity to handle greater power, as mage-students like yourself are often destined for great things. What would a resourceful Witherbloom do when given even more resources? As a reminder, as we continue through the College Cup, the points you gain for winning your first match increase each day!

To keep this test from spiraling outside of the control of even the Founder Dragons, these cards have been added to the Standard banned list for this test:

And now for the third and final test: the Test of Leadership. Having gauged your skill with spells and your ability to handle even more power, the final challenge is to test your leadership skills in a Strixhaven Brawl. This is regular Brawl, but all legendary creatures and planeswalkers not in the Strixhaven set have been banned! While your Brawl decks may contain any non-legendary card in Standard, it may only contain legendary creatures and planeswalkers from Strixhaven.

Will Galazeth lead the expressionistic Prismari to victory? Or perhaps Lorehold will call upon Codie, Vociferous Codex to prove that knowledge is power? Your choice of commander in this test does not affect the points you would earn for any colleges, only your avatar, pet, and sleeve choices!

Rally Your College to Victory!

I sincerely hope you all have fun playing in these events. It's been both a pleasure and an honor to bring experiences like this on MTG Arena to you all. If you have any feedback regarding the College Cup, please let me or the rest of the MTG Arena team know!

So, rally your fellow mage-students, create some sweet decks, and may the best college win!