It's not all that often we get to launch a new Magic format. As the design lead for the Alchemy: Innistrad supplemental set, I was even more excited to help in doing so by creating digital-only cards in new, largely untapped design space. What should digital card design in Magic look like? How can we improve aspects of the Magic experience when circumventing certain physical constraints? How can we best accomplish that with mechanics and individual card designs? What are delightful cards we can make for MTG Arena that we can't make for paper? And how do we do all of this in a way that feels true to the core Magic experience?

In many ways, Alchemy's goal is to provide a format that always feels new and dynamic. We plan to accomplish this in a few different ways. For one, we will course correct more frequently than we do with tabletop formats by rebalancing cards. It's easier to communicate those changes digitally, and we hope to avoid outright bans. Additionally, we will incorporate more content between our major releases, and that content itself should feel novel by virtue of exploring the digital-only space. Furthermore, we plan to intentionally make decisions to have Alchemy diverge from the metagame of Standard and other formats to provide an alternative experience to play.

How Can Our Mechanics Support a Dynamic Format?

There was a lot of unmined design territory left by our initial explorations into digital design with Jumpstart: Historic Horizons. There were plenty of new things to try out with perpetual, conjure, and seek. Beyond these, I was interested in a mechanic that would offer a varied experience game to game. What were ways we could have cards differ game to game by themselves and not just by interactions with other cards? How might we bring more cards from Magic's history into the mix of gameplay?

We landed in a place not all that foreign to other digital TCG designs, but with a twist. I wanted to do in-game drafting of cards. And to have those options vary each game. An innovation here was in more precisely defining the pool of card choices.

This is where spellbook arose as a mechanical concept. Each card with the draft from the spellbook mechanic would have fifteen cards that all felt resonant to that card concept. For example, a witch would have a spellbook with a bat, a black cat, curses, a broom, and other flavorful examples. Meanwhile, there's an angler pulling up all sorts of goofy sea creatures from the depths of the ocean. You will always be presented with a choice of three cards from which to choose. We fortunately had plentiful choices from past sets to pull from, many of which would also come with some nostalgia built in. We also sought out cards that were fun but not necessarily strong enough on their own to have had their chance to shine in competitive Constructed. 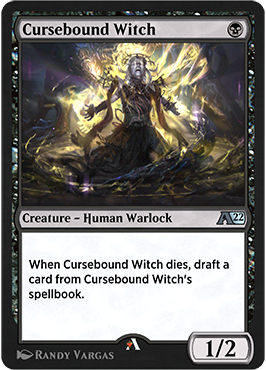 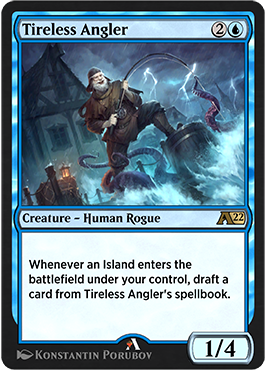 Our goal here was also to present meaningful choices, to have choices that would vary by situation and that would make someone smile and feel smart. This was not out of a desire to add randomness to the game, even though some degree of randomness was needed to provide the varied gameplay experience. Being able to curate the spellbook of fifteen cards from a variety of options allowed us to give players satisfying choices.

Similarly, with some other mechanics like seek, I tried to lean into individual card designs that would help facilitate novel experiences from game to game. Many designs with the seek mechanic run the risk of getting repetitive if you reliably know what you will seek for. I started the design process for all seek cards by trying to make it variable what you would seek. I also looked for ways to create deck-building incentives to include extra cards you wouldn't otherwise include in order to meet seek conditions hoping that, too, would vary gameplay experiences. 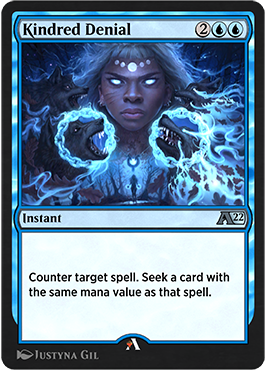 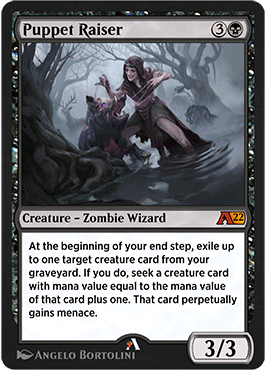 A Fresh Perspective to Older Challenges

What are some general gameplay concerns in Magic, and how might digital design space offer an opportunity to tackle them?

In many formats, especially in those where aggro decks are a big part of the metagame, there can be an undesirable difference in win percentage between being on the play and being on the draw. In digital, as games unfold, we could more easily remember which player had played first and which had drawn first. I didn't feel like the design space of tracking this justified a lot of cards, and so, we began work on a land since it figured to be the single most impactful card type to make a dent on this topic.

I'm excited to see what we learn in this space even though we ended up with a design for multicolor decks where this issue is less pronounced. It likely won't be the last experiment in this space. As with several designs in the first Alchemy set, it's possible this could be attempted in paper, but taken together with other tracking designs, there's a concern of things being overwhelming for tabletop compared to tracking in digital. 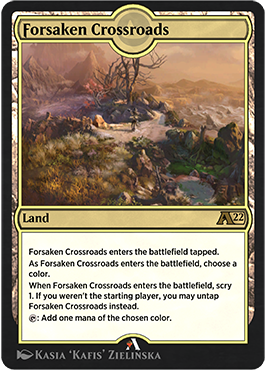 Another gameplay concern we tried to tackle was in making use of dead cards or weak cards in the first game one of a match. By dead cards, I mean cards that have little to no use in a particular matchup, like a creature-kill card versus a creatureless deck. Especially in Best-of-One matches, it can be frustrating to draw cards that are bad for your matchup. Decks in the metagame tend to try to maximize creating dead cards for their opponents. We designed a couple of cards that would use digital design space to help alleviate this experience by converting all the copies of a given dead card into more useful ones. 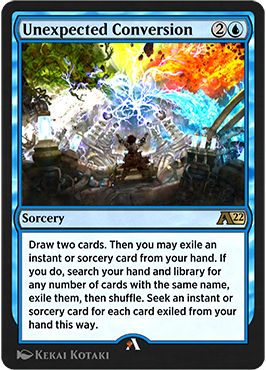 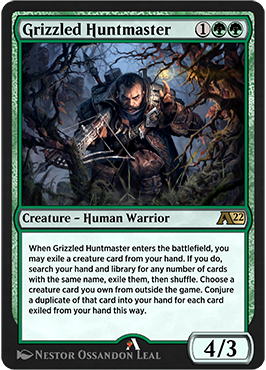 We've also had some issues with decks ramping too quickly and made another one-off design that could track what turn of the game it is to make sure we have a safety measure against ramp that players can opt for if they are looking for answers to that archetype. 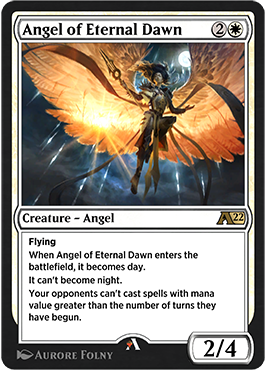 What Is Digital-Only Design?

We went into the design of the Alchemy: Innistrad supplemental set with the goal of all cards feeling like they wouldn't be cards we'd likely print in paper. Sometimes, this simply meant onerous tracking, while at other times, the cards would be really challenging to approximate on tabletop. We generally want to err on the side of avoiding potential sadness if we make cards here that you really like and wish existed for tabletop.

On the flip side, we've made many printed mechanics that some folks argue are too complex for paper. As the set design lead of Ikoria: Lair of Behemoths, for example, I saw plenty of feedback that many cards and mechanics would have been better deployed on digital than on tabletop. There have also been mechanics in the past, like double-faced cards, that perhaps would have felt more at home in a digital space but are now taken for granted as a paper mechanic. With these examples, I mostly want to highlight that there's a subjectivity to where the line is drawn between digital and tabletop designs.

There are many cards in this initial batch that are debatably fine for paper. If some mechanics are adored here, we'd likely consider some of that space for paper as well where practical. I didn't want to go overboard on the digital end of the spectrum with too many of our designs, given concern over the experience feeling foreign if everything was too new and different all at once.

Why Cards Themed from Last Year?

In the future, we plan to release Alchemy content with each set. On launch, I wondered if Innistrad-themed mechanics would overshadow those of the previous year's, making the format less diverse than ideal if we only used Innistrad: Midnight Hunt and Innistrad: Crimson Vow mechanics and creature types.

So, for the launch, we decided we would have some support for the previous year's themes, even if somewhat modest in numbers. For launch, as things progressed, I tried to keep designs rather open-ended rather than tying too much into Innistrad themes, and so it didn't feel like we need that much support for the previous year, but I'm glad those planes got their share of the digital love.

There's going to be a lot for us to learn in building this format and figuring out best practices for design. I'm proud of what we have at launch and what we have coming down the pipeline. We're eager to hear what you like and what you don't and to figure out ways to best keep the format the most engaging for those of you who want to dive into the potential that I think we have here.

Enjoy the new cards and thanks for reading,