Each Magic: The Gathering 2022 Starter Kit comes with everything two players need to start epic head-to-head battles with friends.

Learn how to play in person and online with two ready-to-play decks (each with five rare cards!) and codes to play with a friend online in MTG Arena. The interactive online tutorial and included Play Guide booklet will teach you the basics before you immerse yourself in a thrilling, strategic game that's never the same twice.

Here's everything included in each Magic: The Gathering 2022 Starter Kit: 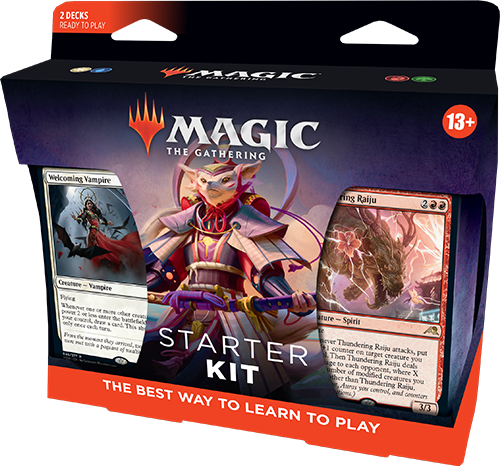 Each color, or color combination, in Magic reflects a certain style of play—each with its own personality, goals, and strategies.

Choose the Red-Green deck to do massive damage with buffed-up creatures, trampling through your opponent's defenses.

Choose the White-Blue deck to take control of the game—casting spells to stall your opponent while you fill the skies with a deadly swarm of creatures.

Get a taste of Magic's rich and varied Multiverse—from a 1920s-inspired world run by powerful crime families to a neon-lit cyberpunk future and a gothic horror plane full of vampires and werewolves.

(Editor's Note: The decklists below pull the newest printing of each card automatically from Gatherer, including printings which are not in this product. These decklists are not card-for-card product displays but rather interactive lists of the cards included in each deck.)