Get ready to ring in the Year of the Rat! Known for being quick-witted and resourceful, the clever rat is the first of the zodiac cycle. We're celebrating the 2020 Lunar New Year with eight reveling rodents, featuring art by JungShan, Fiona Hsieh, Kisung Koh, and Jenn Ravenna. These adorable vermin will infest your deck, your collection, and your heart.

Secret Lair Drop Series is kicking off 2020 strong by bringing back some of the best and most beloved Rats in all of Magic's history to honor the Year of the Rat. In addition to gorgeous brand-new art, these powerful critters will swarm the board and ensure victory.

Here's what you'll get with each copy of Year of the Rat:

Year of the Rat is being published in English. 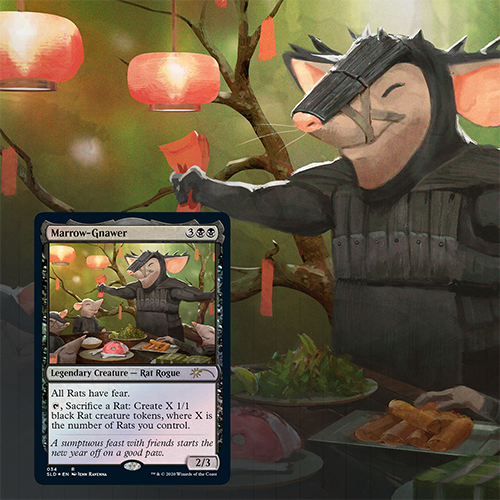 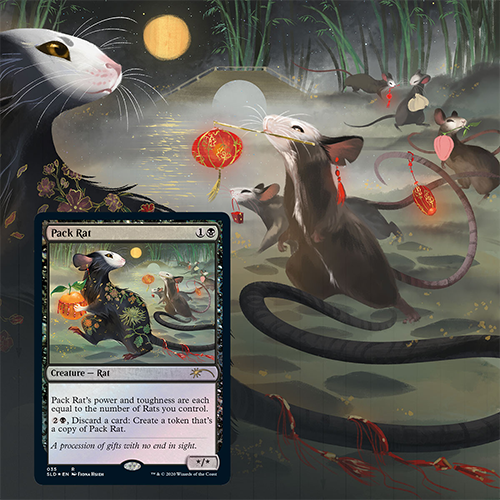 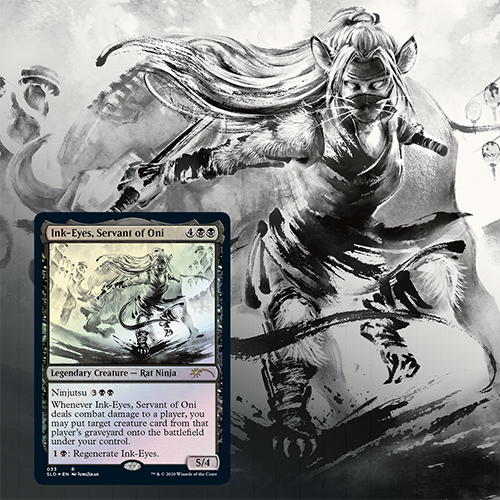 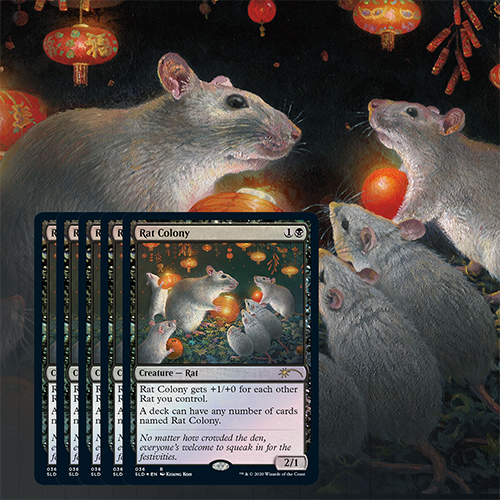 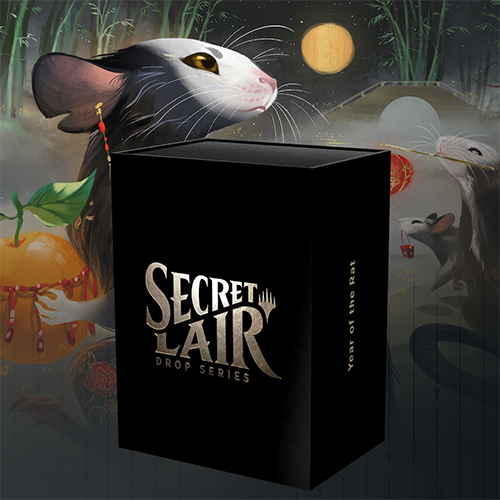 Now that you've fallen head over heels in love, hear a little bit from the art director of the drop, Meris Mullaley, about how the drop came to be.

"Being Chinese-American, the celebration of Lunar New Year has been as integral to my life as Christmas or Halloween. As art director for the Year of the Rat Secret Lair drop, I wanted to make something for Magic fans and the 1.5 billion people who celebrate Lunar New Year.

On Jan 25, 2020, it will become the Year of the Rat, according to the zodiac that assigns animals (and their personality attributes) to a 12-year cycle. The order of the animals is based on a myth in which the animals raced to greet the Jade Emperor and the rat, being the most cunning, rode on Ox's back and then jumped down at the finish line to be first.

If you're of Chinese descent, you would hear it called "Chinese New Year," but the holiday is known globally as "Lunar New Year" and is celebrated by multiple East Asian and Southeast Asian regions. It was important to me that the artists involved in the project reflected the diversity of cultures that celebrate Lunar New Year and a range of art styles.

Rats in Magic: The Gathering are often depicted as disease-ridden scavengers. For this Secret Lair drop, I worked with Emily Teng to create art descriptions that portrayed iconic Rat creature cards in a harmonious, aspirational manner with symbols of the Lunar New Year (lanterns, firecrackers, fruit, etc.) represented in the art.

It was an honor to work with JungShan, Kisung Koh, Fiona Hsieh, and Jenn Ravenna on these special interpretations of well-loved Magic cards.

Ink-Eyes: is the legendary rat that just jumped off the ox's nose to become the first animal of the Zodiac.

Rat Colony: is a happy, loving family (with whiskers and tails) decorating their den for the new year festivities.

Pack Rat: is leading a procession to bring food, gifts, and good wishes for the new year.

While this Secret Lair drop doesn't come with any MTGO integration (don't worry—more of them will in the future!), it does still come with a code to get Year of the Rat-inspired sleeves in MTG Arena.

When you purchase the Year of the Rat drop, you'll get a follow-up email that will confirm your purchase. Your code will be made available once your item is on hand and ready to begin its shipping process.

Similar to December's Secret Lair drops, we want to make sure you can get this drop if you want it. Purchase in the 24-hour window, and you're guaranteed to adopt eight brand-new pet Rats.

Just like last time, we've stocked a limited quantity right away, so we have some ready to head to their forever homes ASAP. The earlier you order, the more likely you'll be part of the stocked wave (and therefore get it earlier)! If you're in the wave that needs to be printed (i.e. any orders that come in after that initial stock is spoken for) you can expect to get yours in a handful of weeks. But don't fear, they'll arrive at your door.

We've also expanded our shipping options starting with this drop, see below!

We can ship to the following regions (locations in bold are new additions):

As you can see, we've heard you and we're working hard to bring Secret Lair to even more places in the world. It was particularly important to us to make sure this product specifically was available in China, and some hard-working people behind the scenes made that possible, and a few other regions as well. While this does result in some regional differences (like MTG Arena codes not being redeemable in some regions), we're making every effort to make Secret Lair as widely available as possible. We hope to add even more locations in the future.

Year of the Rat is our first Secret Lair of 2020—but we have plenty more planned with eye-popping art, fun themes, and some surprises along the way. Watch this space, sign up to be notified on of the newest drops on secretlair.wizards.com, and follow @Wizards_Magic for the next installment of the Secret Lair Drop Series.

Phyrexia: All Will Be One Comprehensive Rules Changes

Phyrexia: All Will Be One Update Bulletin