We'll consider changes to the Standard environment, if necessary, after evaluating Innistrad: Crimson Vow's impact on the metagame.

is banned in Historic.

is suspended in Historic.

is banned in Historic (from suspended).

Five digital-only cards are being rebalanced:

Jumpstart: Historic Horizons created a large amount of change in the Historic Metagame, and most of it looks very positive. But after watching initial reception, September's Historic Arena Open, and the response of the broader metagame to the Arena Open, there are a couple adjustments we feel the Historic format needs.

In addition to the normal bans and suspensions, the digital-only cards in Jumpstart: Historic Horizons give us a chance to return to a balance tool we haven't used in Magic for many years: functional rebalancing for cards. More on that below.

On the broader Historic metagame front, one of the big changes is the return of decks built around , now using to boost the hit rate on the combo dramatically. This has led to a marked increase in win rate for the deck relative to the prior version and a corresponding increase in popularity. The prior, less consistent version of this deck was borderline, and the increased hit rate in this version has pushed it over the line. Because we think it is unlikely for Historic to be able to safely include a combo of this speed and consistency, is banned in Historic.

In Banned and Restricted Announcements earlier this year, we have talked about the dominance of blue and red decks. Our past changes, along with the additions from Jumpstart: Historic Horizons, have done good work in addressing this, but we still see a slight issue here.

Looking at high-level play and the Arena Open in particular, emerged as nearly a must-include in high-performing blue decks. It was the most played nonland card in the Arena Open as well as the Best-of-Three ladder, and it is one of the most played cards in Best-of-One as well. While we do believe that removing from the format is likely to create further improvements in format diversity, we also believe the case is less clear than . As such, and in order to increase format diversity, is suspended in Historic.

Rounding out the bans and suspensions, is currently suspended in Historic, and this has helped in shifting the metagame in a healthier direction. Because this suspension has proved positive, is banned in Historic.

In addition to these bans and suspensions, we are also rebalancing five cards with this announcement. Digital-only cards in digital-only formats like Historic give us the ability to functionally rebalance cards simply and clearly. We can simply update the text digitally, and the cards will remain accurate to their new function.

Functional rebalancing is a significant change in how we're managing balance for our formats, and it merits a bit of explanation around what it does and doesn't mean. Going forward, we will be managing formats on MTG Arena in two different ways. "Print" formats, like Standard, will continue to work exactly like they do in tabletop Magic. For "Live" formats, like Historic, we are adding live balancing alongside banning and suspension as a tool to address problems and make improvements to the format.

We are very aware that there are many MTG Arena players who want the game to be an authentic representation of tabletop Magic, and our "print" formats will remain exactly that. Here, a card will always work the same way that the printed version of the card does and balance will be maintained the same way it traditionally has been: through banning cards when they prove to be problematic.

In addition to being an authentic version of tabletop Magic, MTG Arena is also a digital game. Digital games often make use of a wider array of balancing tools, like live rebalancing, and for good reason. The increased play rates and data collection possible in digital games tends to magnify the impact of power imbalances, which makes it valuable to have more tools to restore balance.

Currently, we are restricting these changes to digital-only cards, where there will be no conflict between a digital and printed version of a card. We would like to expand beyond this (for example, by rebalancing previously banned cards so they can be safely returned to play in digital formats only). There are multiple clarity and communication problems we will need to solve before we can consider those types of changes. This is something we plan to work on in the coming months and, since it bears repeating, would only affect digital formats.

One of the big themes of Magic over the last several years has been recognizing and embracing the many ways that Magic is played. On the tabletop side, we have released new content focused on Modern players, Commander players, collectors, and other groups. On MTG Arena, we recognize that we have traditional tabletop Magic fans and fans of digital games. With this shift, we aim to fully support both—continuing to deliver an authentic tabletop experience in formats like Standard and embracing new balance tools for digital-only formats like Historic.

How Will Rebalanced Cards Work?

Since these digital-only cards are only on MTG Arena, we can cleanly update all existing cards at once. With MTG Arena's update on October 14, the text and stats on these cards will change to match their new values, exactly as if there had been an Oracle update. These changes will affect any format where these cards can be played (Historic, Historic Brawl, Direct Challenge, etc.). There will not be an in-game notification about the rebalancing, but that is something that we are working toward.

Much like with bans and suspensions, whenever we rebalance cards, we want to provide context around why we're making those changes. Read on for more info there from Donald Smith.

Introduction to the Changes

Hey, y'all. I'm Donald from the Play Design team. I've made a few appearances on the site talking about Challenger Decks, the genesis of 's design, and how powerful was in my deck at the 2017 World Championships (it wasn't). Behind the scenes, I worked on MTG Arena's Mirror Mirror event, and today, I'm here to give the rationale behind these rebalanced cards.

Like digital-only designs, live balancing is a new tool to maximize the potential of our digital formats. This first set of changes is not meant to significantly impact the metagame but improve the ladder experience. This will also give us a chance to collect feedback and data on how the environment reacts to these changes. While we will still ban and suspend cards, we will also look for opportunities to improve the competitive metagame and address other issues through live balancing.

The three buffs are aimed at popular cards that have room to be stronger to better serve the decks and roles they were designed for. The remaining two balance changes are not meant to reduce the playability of the cards, but to address an undesirable combo from Historic. 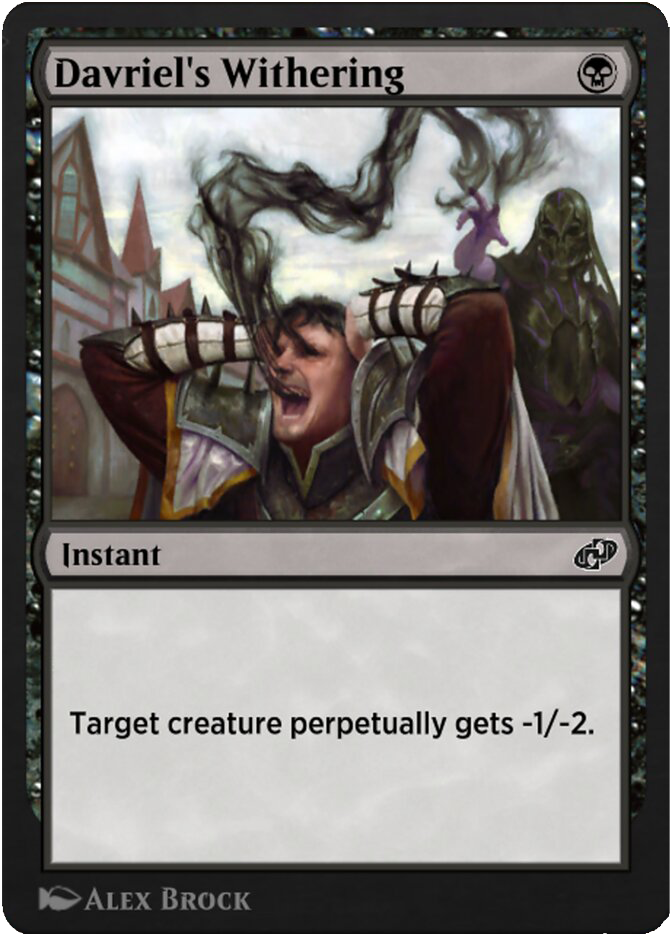 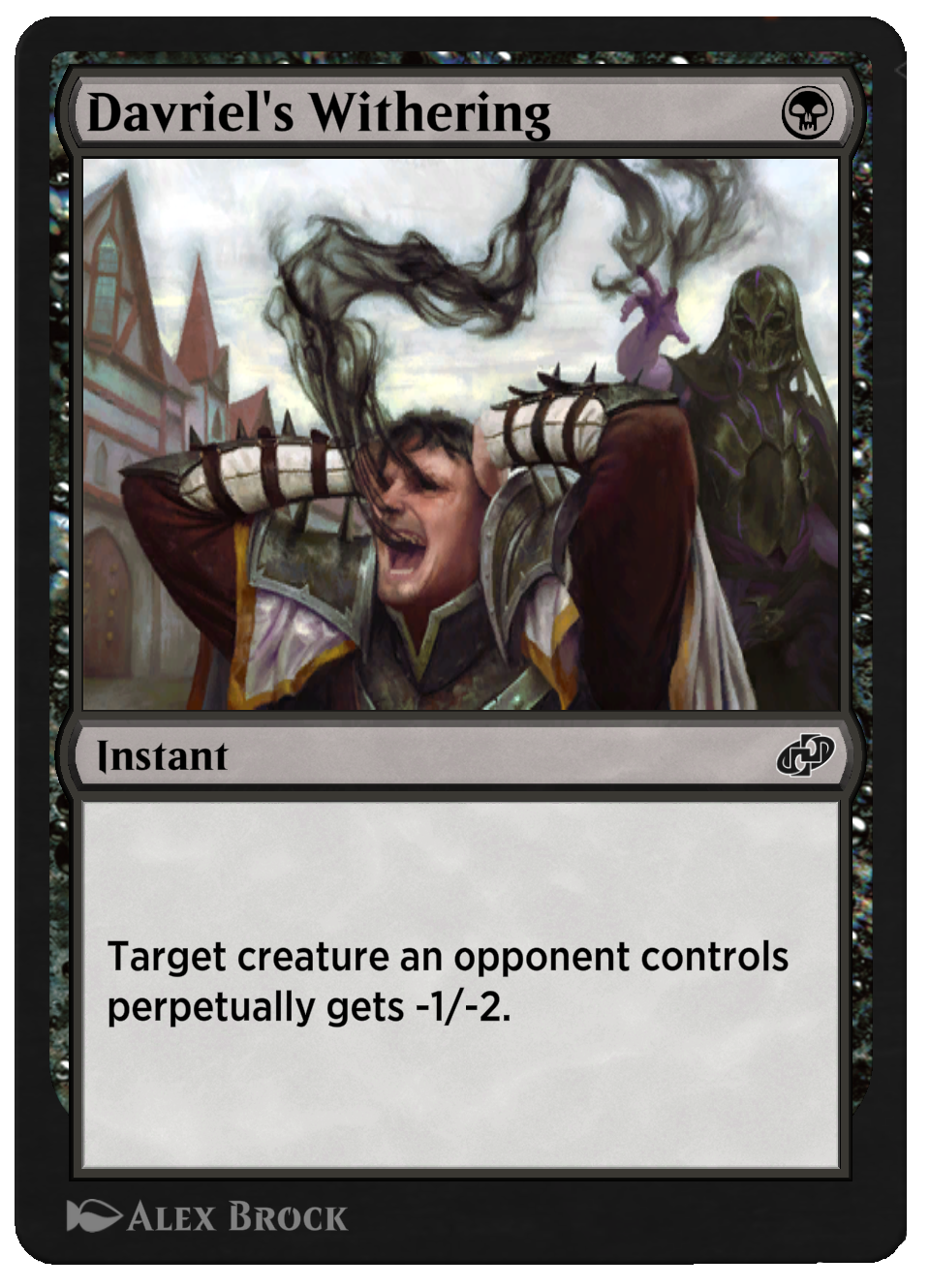 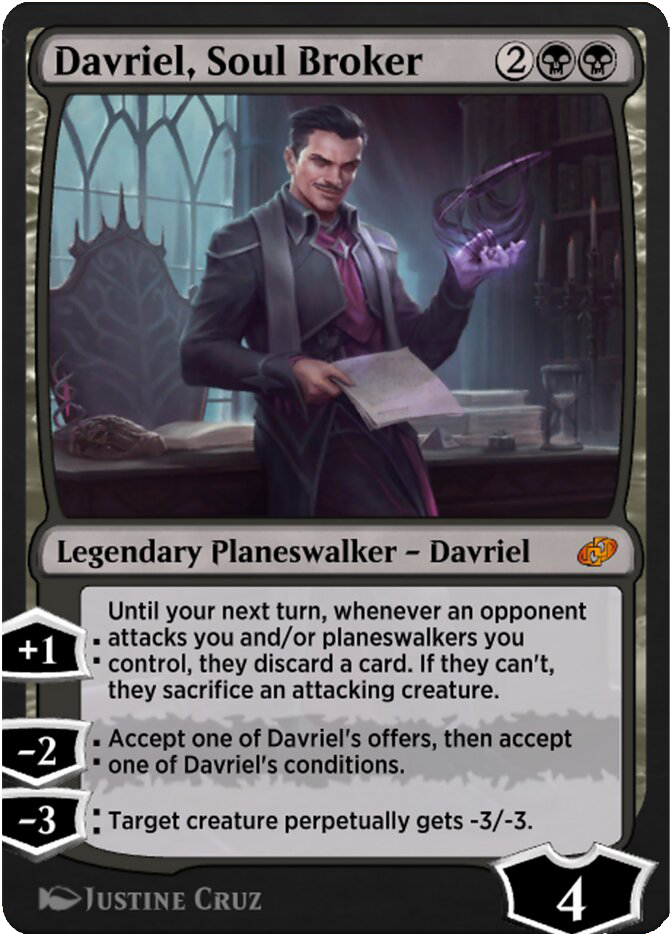 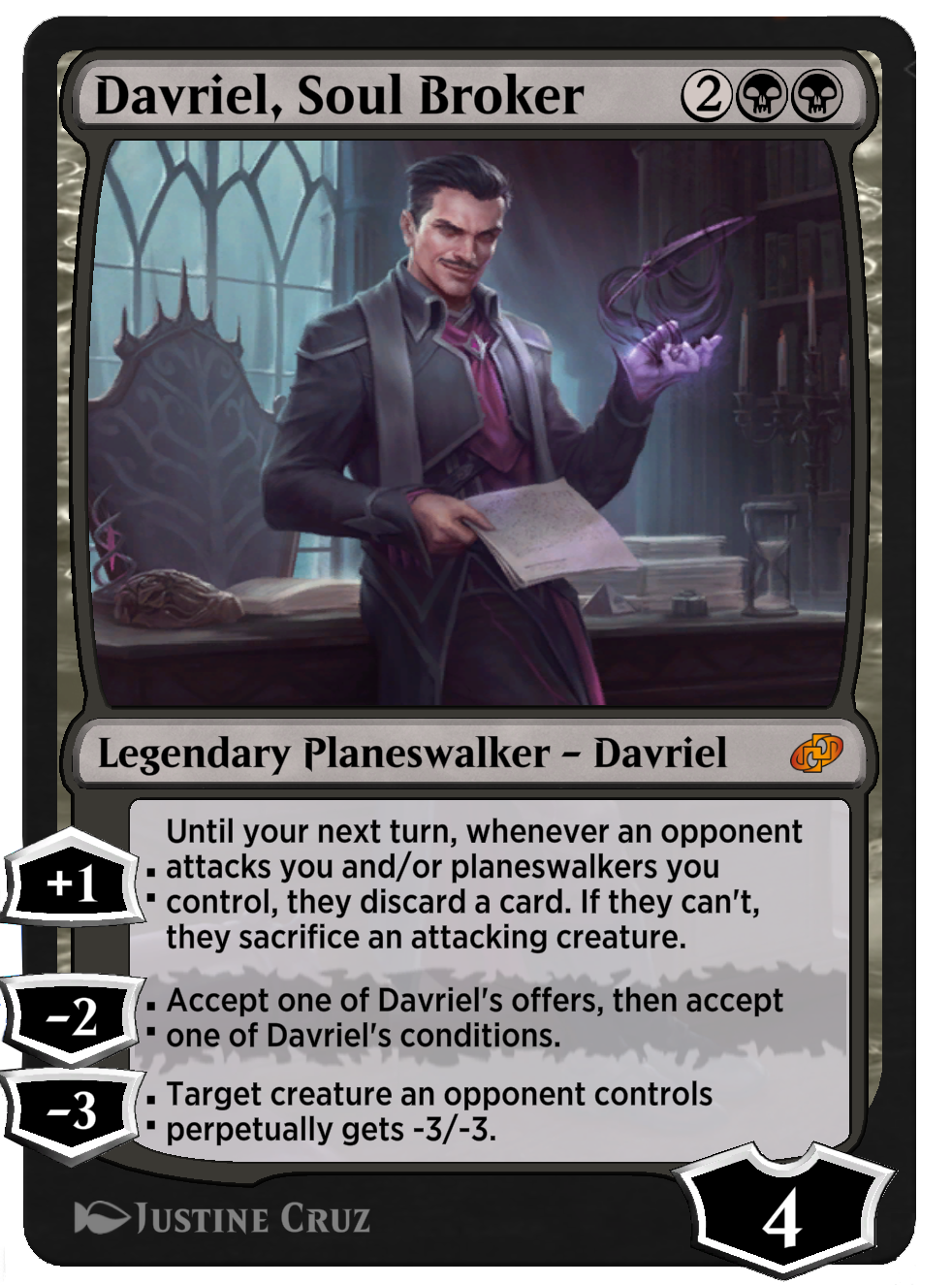 We are removing the undesirable interactions with that can easily result in a draw. 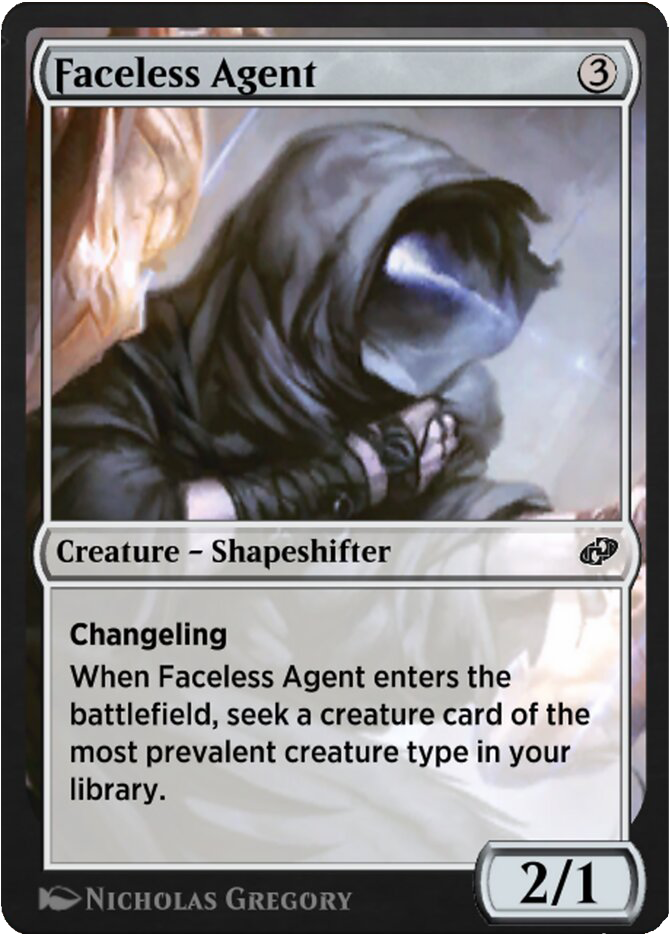 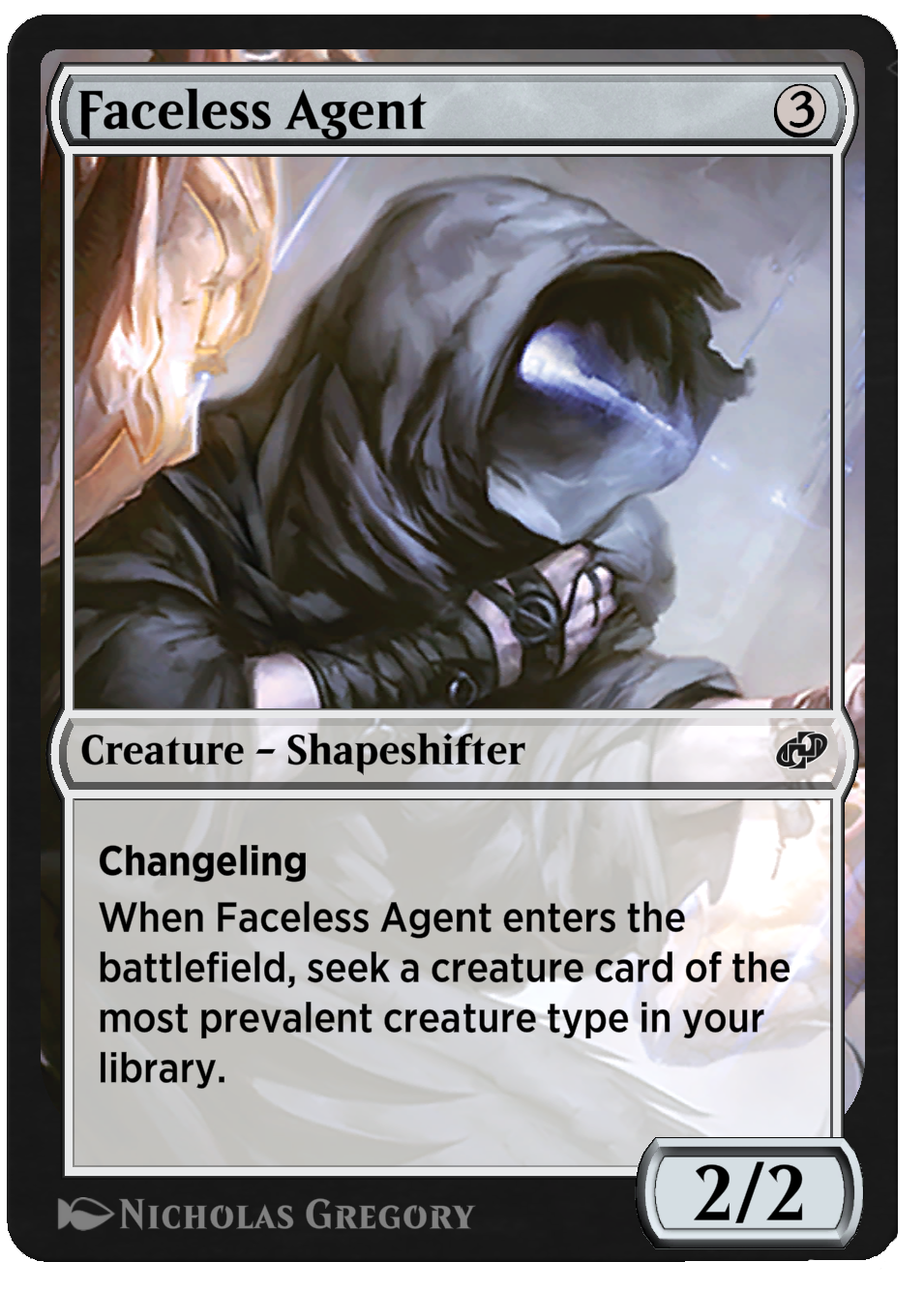 Faceless Agent is an important card for tribal decks that don't currently have the density of cards legal in Historic to fill out their curve. This is a simple buff to improve the experience of players using those tribal decks.

Sarkhan, Wanderer to Shiv
Second ability is now +1 (from +0) 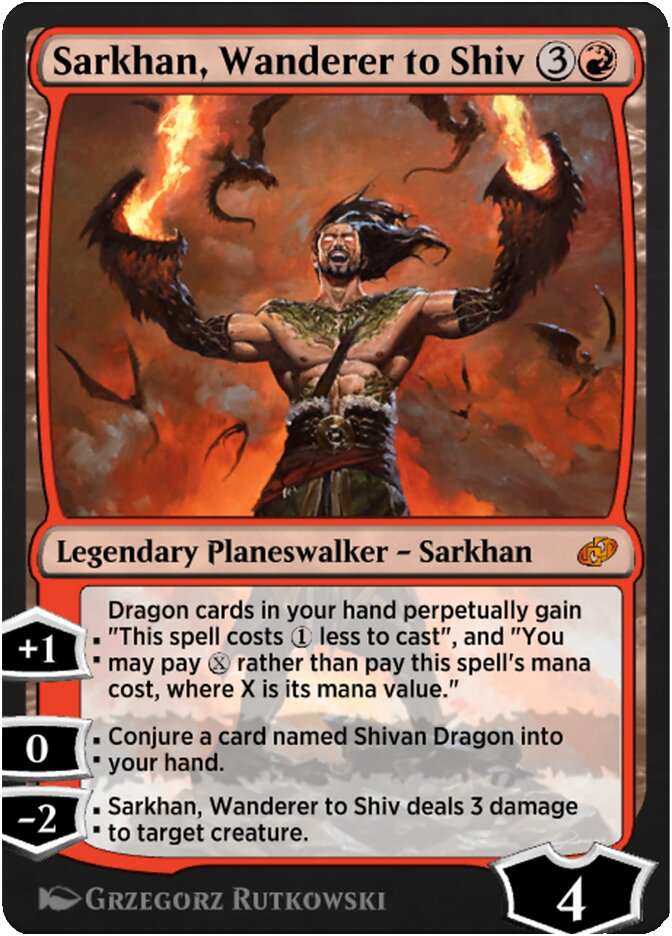 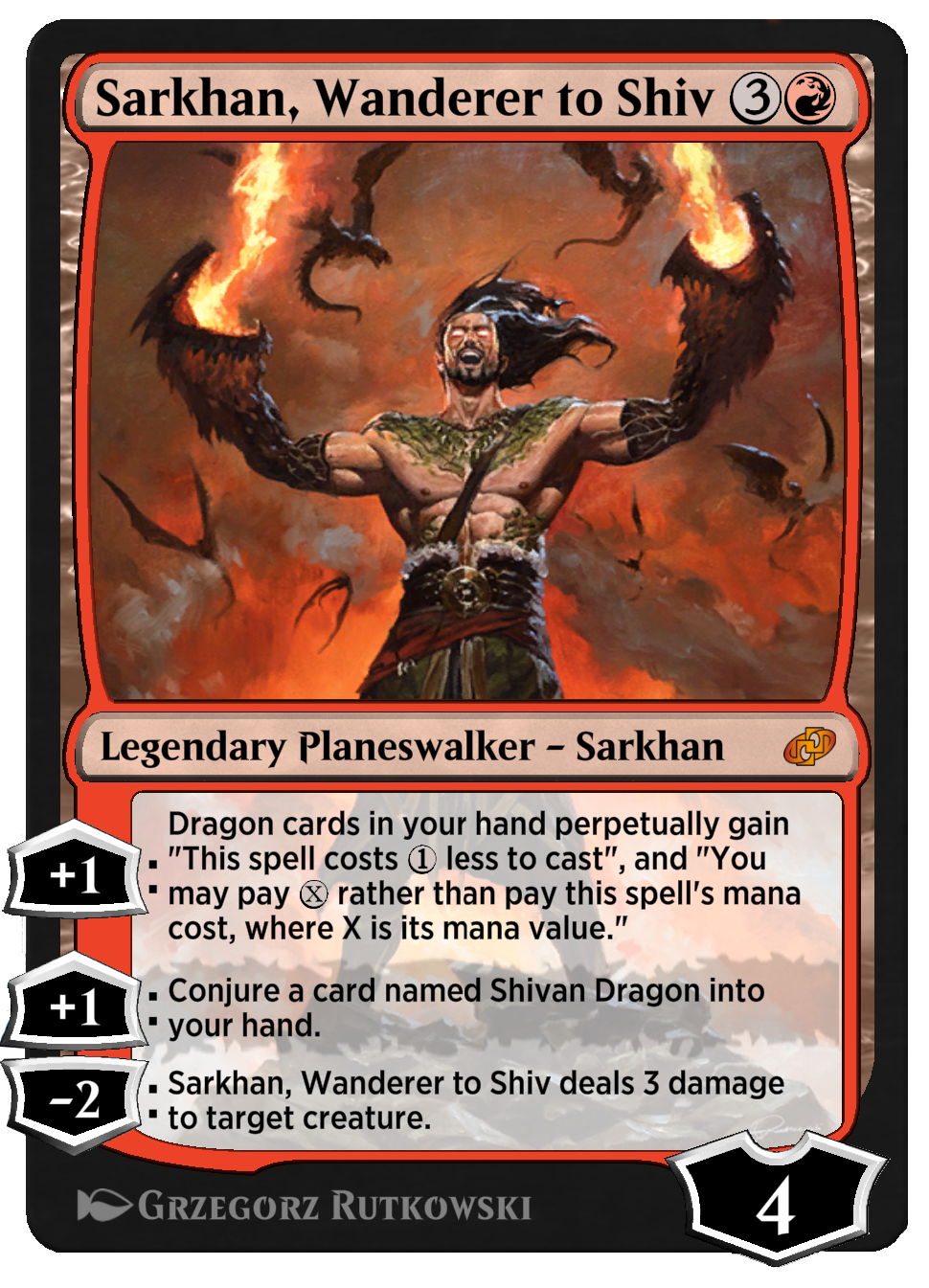 Subversive Acolyte
Costs 1B (from BB), is 2/3 (from 2/2), and had the toughness increases from becoming Human or Phyrexian reduced by 1 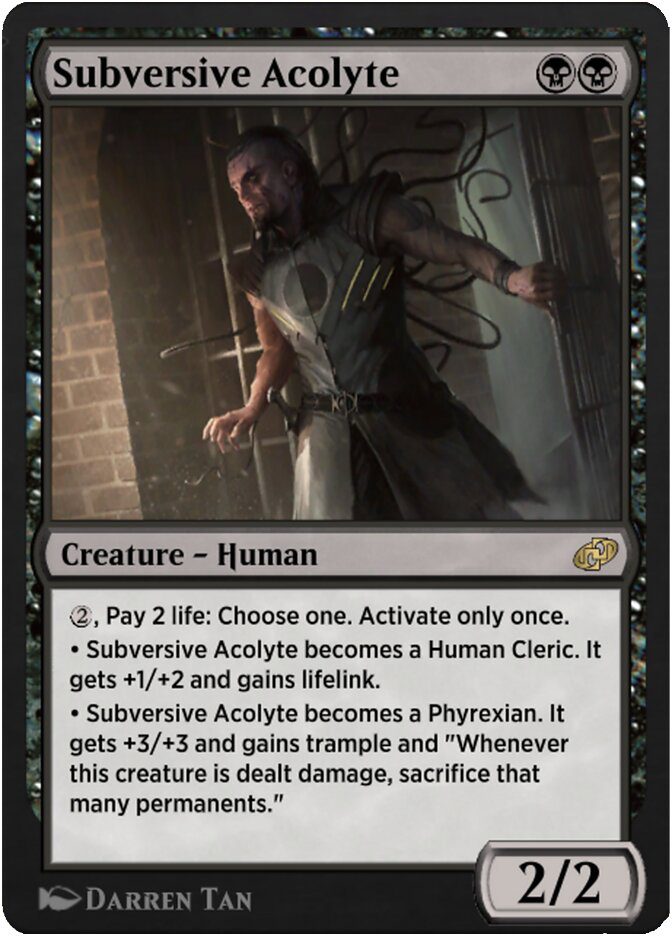 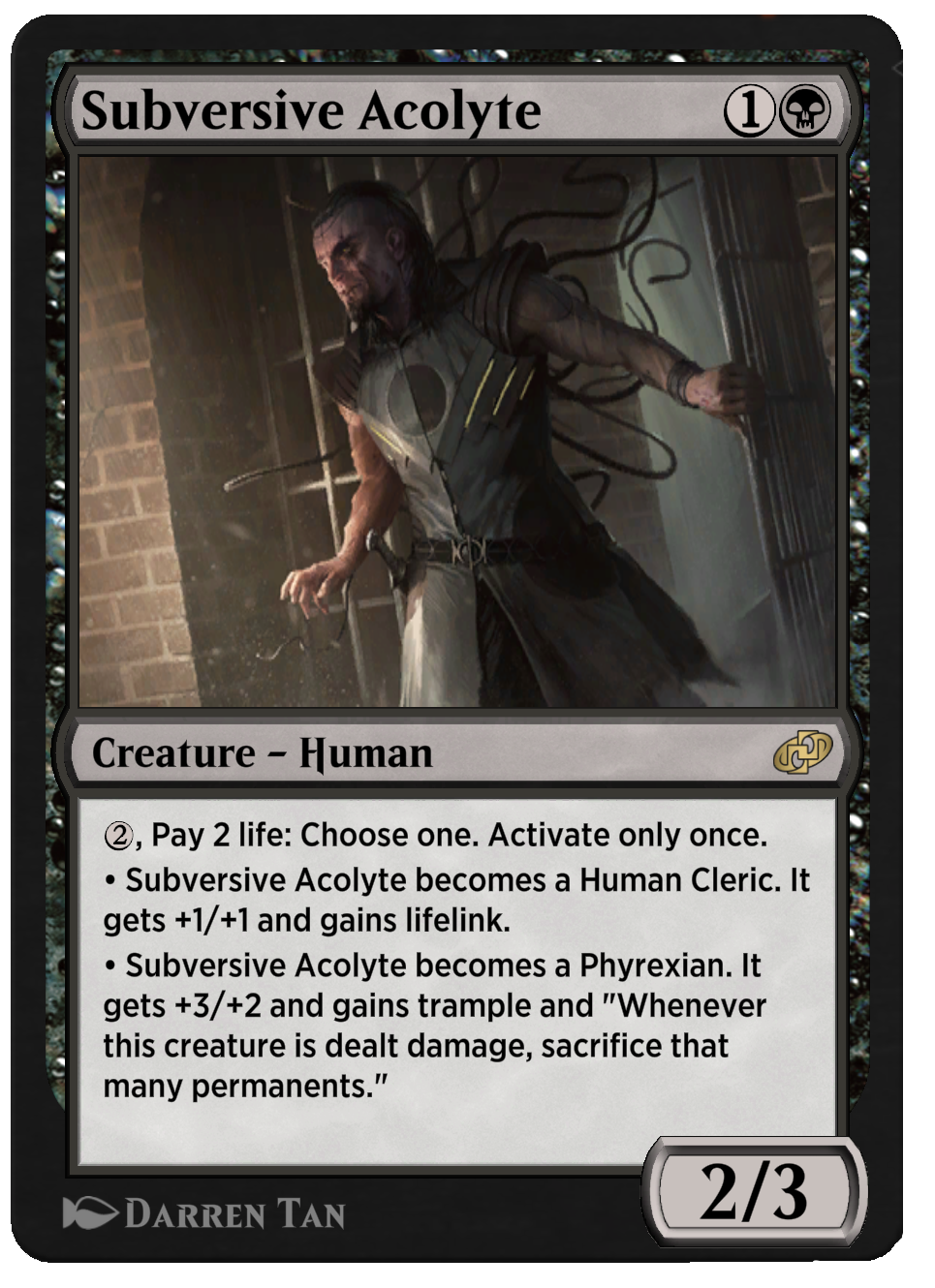