Hello, players! My name is Ben Lundquist, and I'm a game designer here at Wizards of the Coast and a relatively new addition to the team. Today, I bring you a preview from Dungeons & Dragons: Adventures in the Forgotten Realms. I'm excited to share this sneak peak, not just because it's special, but because it was part of the very first deck I ever built on the Play Design team!

This is The Blackstaff of Waterdeep: 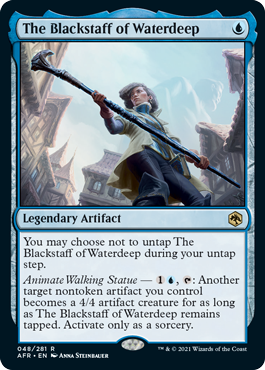 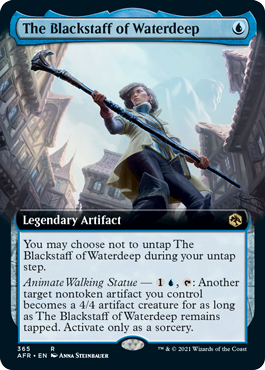 Something you will notice within Adventures of the Forgotten Realms is that there are flavorful mechanical words tied to many of the designs. "Animate Walking Statue" in this case simply signifies that this is an activated ability, but it does so in a way that tells a story, which I have really come to appreciate. My background as a designer (and player) has previously been more focused on mechanics and interactions, so at times the flavor and storytelling can be lost on me. This line ties the lore behind The Blackstaff of Waterdeep and the Walking Statues right into the functionality, which is something that I really appreciate. When you read "Animate Walking Statue," you may not have the intricacies of the rules down quite yet, but you know what you're getting into.

As far as play pattern is concerned, historically, cards like Ensoul Artifact have created high-tension moments that devolve into answering the permanent immediately or moving into the next game. The Blackstaff of Waterdeep creates less of an all-in dynamic, which is something that I personally have enjoyed. By giving up a little of the velocity, any deck containing these gets paid back in resilience. If your Animated Walking Statue leaves the battlefield, there is likely another one not too far behind it.

Throughout The Blackstaff of Waterdeep's time in Future Future League, the long design process saw it go through many iterations of both text and numbers. Much like an animated walking statue does, it kept its primary form, but there was movement. And like I said, this was part of my very first deck, so some of those changes came as a result of my very own playtesting! The one that stands out most to me was getting the sorcery speed clause added to it. While it does drive down the power level being only sorcery speed, it offers a lot more fun gameplay not having to worry about on-board ambush blockers and doing combat math when the sizes of creatures grow after you block.

There are still countless cool things I've wanted to do with The Blackstaff of Waterdeep, like finding a way to untap it at instant speed to counter a removal spell or choosing to untap it during your upkeep to play a sweeper and then reanimating walking statue for a hefty attack. There's so much untapped potential, I hope you get a chance to enjoy it as much as I have. Take care!