Immortality is an interesting idea in stories. Sometimes, it's a fool's errand to seek and serves to remind us how life's transience is precious. Other times it's a foil, a curse, that reveals itself only when it's too late to go back—a common trope for vampirism. And, rarely, it's strictly a beneficial boon to someone who can make the most of the resources granted by unlimited time.

I'm not sure where one particular Dominaria legendary character falls on those ideas around endless life, but given his story so far, I'd guess it's a bit of all three. This is Jodah, Archmage Eternal: 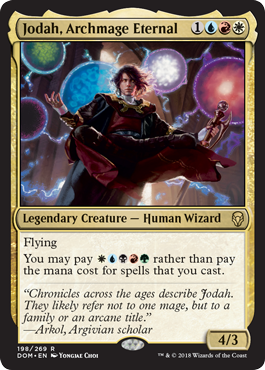 He's not retired, and he knows how to get a deal on spellcasting.

While the story team will share what he's up to in current times, Jodah is renowned for a few highlights of history already:

His résumé is beyond the scope of one article, but as an eternal archmage, he's picked up a few tricks over the years. The easy side is "flying," which has to be a parlor trick for him at this point, and being a powerful 4/3 for just four mana makes him a reasonable Limited threat.

Levitating around as a powerful ally is easy when you're trained in the arcane. It's his other trick that's intriguing.

Alternate casting costs are almost always a powerful way to break the rules of Magic. Fortunately, while we're not immortal, we have been around long enough to see this ability before.

So what can Jodah do for us?

Paying five mana for a ten-mana spell is busted. Spells that cost a lot come in two flavors: either it's just something big that needs to be expensive (see Scaled Wurm and Crush of Wurms), or it's a payoff for spending that much mana.

All of these cards are powerful in a game of Magic. Getting to big mana is a feature of Commander games, where most of these splashy spells have the biggest payoffs. Copying an entire army? Taking every creature from every graveyard? Making all your artifacts indestructible? Paying five mana instead of nine, ten, or more has obvious upsides.

Paying five mana instead of a tougher cost unlocks potential. It takes planning to set up access to every color of mana—which we'll look at in a minute—but if you do, then Jodah opens a world of expensive spells up to you. Have you ever wanted to play all these spells together?

Casting one of these big spells asks for not only a lot of mana, but specific planning or setup. Emrakul, the Promised End needs lots of card types—not just in your deck, but your graveyard, too. Kozilek, the Great Distortion requires colorless mana, which puts specific strain on which lands or mana sources to use. Double and triple colored mana costs can be difficult in a deck with three or more colors—and you're committed to at least three if you're building a deck that can reliably cast Jodah, Archmage Eternal.

Going all-in on setting up every color of mana not only gives us Step 1 of a Jodah deck's plan, it also makes playing a wide range of powerful spells easy. Five mana for a Kozilek or Expropriate or Plague Wind is simply not fair.

While the rest of the cycle that includes Bringer of the Black Dawn has its uses, getting to Vampiric Tutor each of our upkeeps is outstanding. Maelstrom Nexus turns our first spell each turn into a two-for-one deal with cascade. (See the recently-returned-to-Modern Bloodbraid Elf for an example of how that mechanic is powerful on its own.) Lunar Avenger is a better avenger with Jodah than Jodah's Avenger. Bring to Light is an automatic "find something that's five mana."

These cards all care about hitting five colors of mana, and in a deck planning to take advantage of Jodah, Archmage Eternal they will shine too.

As with most arcane powers, however, there are a few caveats to keep in mind.

You can't trick spells with X in their cost. While casting Demonfire for X equals 50 would be an awesome sight to behold, you actually need the mana proper to do it. The alternate cost of WUBRG won't work, as in that case you've paid exactly 0 for X, an (unfortunate for excitement) effect of the rules of Magic.

You can only pay one alternate cost for a spell. While flashback lets you cast a spell from the graveyard, you have to actually pay that flashback cost—WUBRG can't replace it, which is why Crush of Wurms isn't a combo card for Jodah. Not mixing together multiple alternate costs is also part of the rules.

Balancing the different approaches to a five-color deck is up to personal choice, but if you're considering Commander, then last year's "Draconic Domination" deck from Commander (2017 Edition) has a good starting point for a mana base.

While Jodah, Archmage Eternal isn't an obvious fit alongside Dragons—and that isn't a suggestion I'm making—using a range of lands that produce multiple colors alongside basic lands of each color sets up the ability to go in both directions as needed. The flexibility to search up basic lands using things like Wayfarer's Bauble and Armillary Sphere is a good compromise between relying too heavily on mana rocks or dual lands alone.

And if you really want to unlock the power of Jodah, then you'd better have a few ways to get to the part when you overwhelm opponents with power. Jodah, Archmage Eternal plays the long game, after all. Curse or blessing, that's part of what makes endless life an advantage.