I'm Mike Turian, principal product designer for Magic. One of the areas I focus on is how we are capturing the essence of each Magic set with treatments that amaze and highlight the set. In this article, I'll be sharing some new card images for showcase cards, borderless cards, extended-art cards, and more! I'll be giving a complete breakdown of the Core Set 2021 Collector Booster, as all these treatments are found within Collector Boosters, and I'll also cover all the other Core Set 2021 products you can find each of these cool new treatments inside. 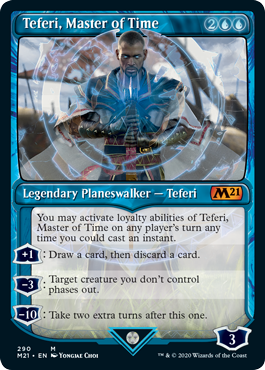 Here is Teferi in his showcase treatment! No need to feel blue, there is a special showcase frame for each color's planeswalker card!

For the showcase treatment in each set, we were looking to highlight the coolest elements and capture the essence of the set. With Core Set 2021, we were looking to bring Planeswalkers to the front and center. Adam Prosak, the Core Set 2021 set design lead, was already working on a vertical cycle associated with the five monocolor planeswalkers in the set. With each mythic rare planeswalker having a rare, an uncommon, and a common reference, we knew we had a great match for the showcase cards in the set. Adam had already worked to make sure all the cards that referenced individual Planeswalkers worked well together. We loved how adding a sweet creative treatment highlighted that connection as well.

Talking with Senior Graphic Designer, James Arnold, about how he put together the new showcase frame treatment shown above, he notes how the creative treatment for Teferi is based on the original blue mana frame. Then he wanted to fold in elements of the refraction design similar to what is being reflected in the art. Lastly, you can see how the framing elements are partnered with Teferi's costuming to extend Teferi from the art into the entirety of the card.

While Teferi is the only Planeswalker with four variations of art in the showcase frame, each Planeswalker in the set had their frame built out to capture their spirit for both their own planeswalker card as well as each card in the Planeswalker's cycle of cards. 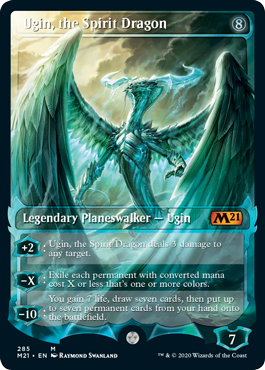 Ugin is featured in Core Set 2021, bringing back Ugin, the Spirit Dragon. We were so excited about the showcase treatment that we knew we had to create an Ugin showcase frame as well. Even though Ugin doesn't have additional name-referenced cards like the other five Planeswalkers in Core Set 2021, nor a basic land (sorry, Wastes!), featuring Ugin was too good of an opportunity to pass up. 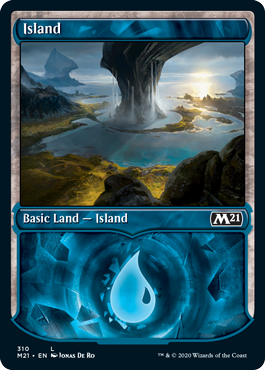 There was one final piece to add to the showcase set of cards—basic lands! Each of the five monocolor planeswalkers in Core Set 2021 has their own basic land featuring their home plane. For instance, this Island shows off Teferi's home plane of Dominaria in the showcase frame, and now you can cast all your Teferi spells with style!

These showcase cards can be found in Core Set 2021 Draft Boosters and Collector Boosters along with any product which has those packs contained within them. 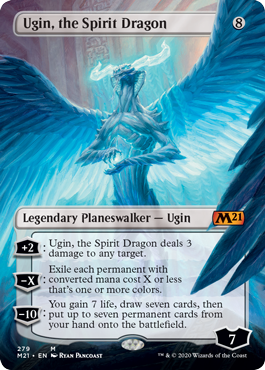 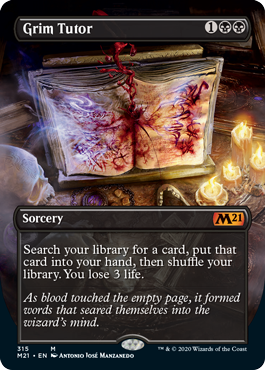 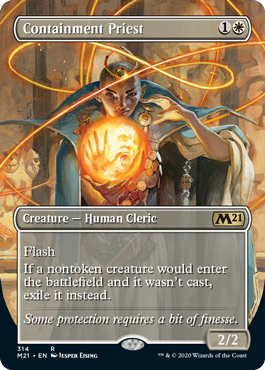 These borderless cards can be found in Core Set 2021 Draft Boosters and Collector Boosters along with any products that have those packs contained within them. 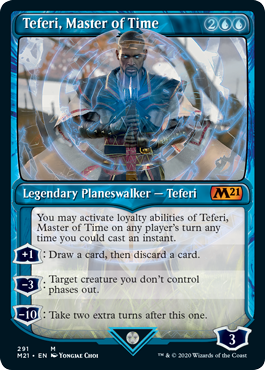 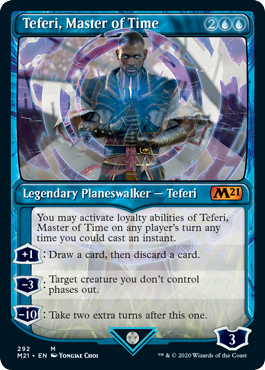 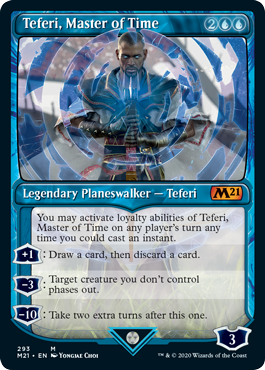 As Teferi, Master of Time is the Planeswalker face of Core Set 2021, we wanted to add one more element to him to capture his spirit. The teams working on the set were developing Teferi's suite of powers while senior art director Cynthia Sheppard was leading the commissioning of art for the set. She felt that since Teferi would be embodying time manipulation that we could show off Teferi manipulating time by creating multiple versions of art for him.

For Teferi, Master of Time, there are four regular-frame versions, four showcase versions, and a borderless version along with each in foil. That is a lot of Teferi! 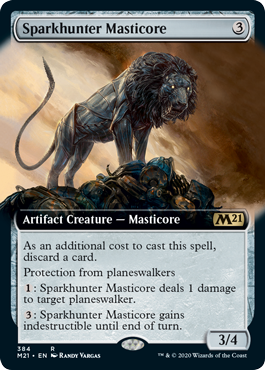 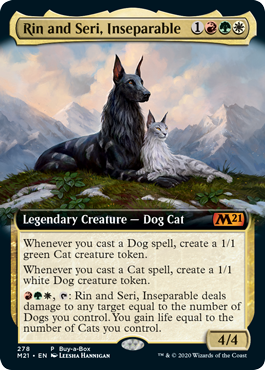 Extended-art treatments continue to be a popular way to show off a little something extra in decks. For each rare or mythic rare that doesn't have a showcase or borderless treatment, we want the Collector Booster to highlight each of those rares with a cool treatment of its own.

Collector Boosters remain the only way to get extended-art rares and mythic rares. 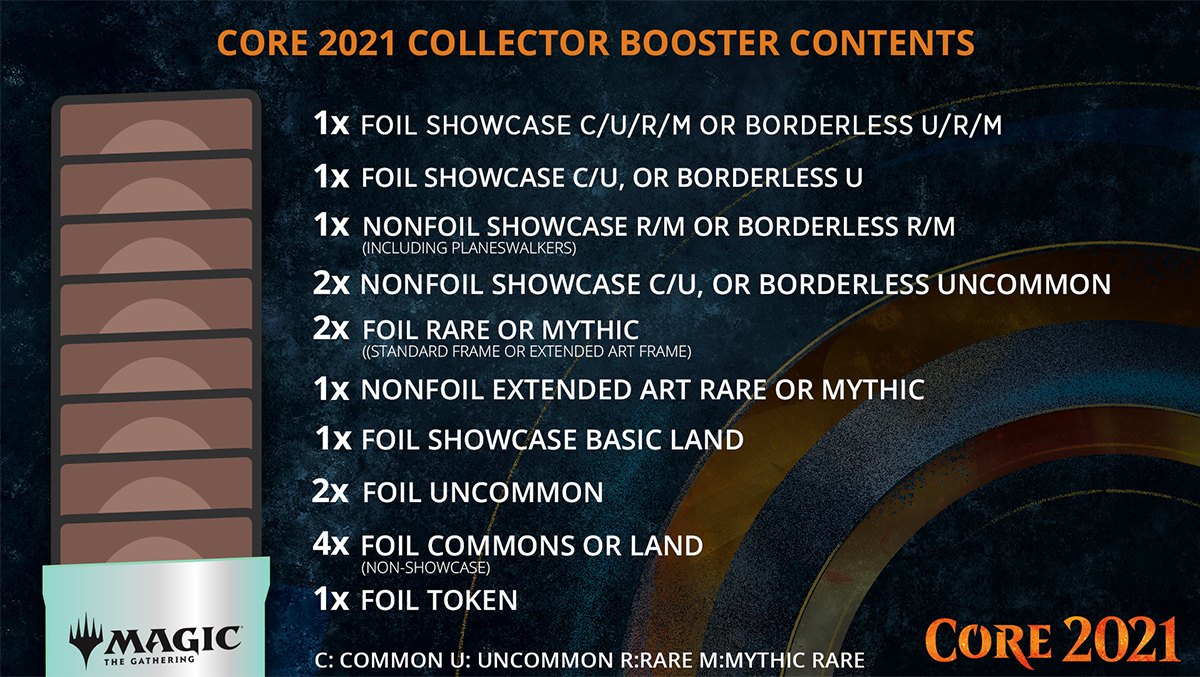 In a pack of a Core Set 2021 Collector Booster, you are always getting a minimum of four rares or mythic rares, and about 45% of the time, you will get five. Each pack will include 11 foils (plus the foil double-sided token) and 4 non-foil cards.

To Recap, How Do I Find All of These Cool Cards?

Core Set 2021 is filled with lots of amazing treatments! We always want to make opening booster packs the most fun experience possible, and we love the excitement that these cards add to cracking open a booster pack. Let me know what you think of all these treatments on Twitter @mturian. Thanks for reading!