I'm Mike Turian, principal product designer for Magic. One of the coolest parts of my job is when Magic heads to a completely new world. We spend a lot of time defining what that new world could be, needs to be, and what makes it awesome. Today, I'm going to spend time delving into the world of Ikoria and showing off the amazing treatments that you can find in Ikoria: Lair of Behemoths and the Ikoria Collector Booster.

With Ikoria: Lair of Behemoths, we visit a world dominated by monsters. All aspects of the world are focused on what it means to have monsters being the key lifeforce in the setting. One of the first aspects that we focus on for each set is understanding the question around what drives conflict on this plane and whom that conflict is with.

For the world of Ikoria, we knew that monsters would be the driving force behind the conflict engine. We would want to show monsters fighting other monsters. Magic is inherently a game about fighting, and with a focal point such as monsters, we needed to capture the excitement of when two behemoths crash into one another.

A second piece of the conflict is showing off monsters versus cities. As the world of Ikoria developed, humans quickly realized what types of defenses were needed to stave off monsters. The humans were quick to become both militaristic and ingenious. For instance, in areas where monsters didn't fly, humans created flying cities. Unfortunately for the humans, the monsters of Ikoria have begun to mutate and the fortresses that were previously successful at protecting humans have now become fodder for the monsters to annihilate. 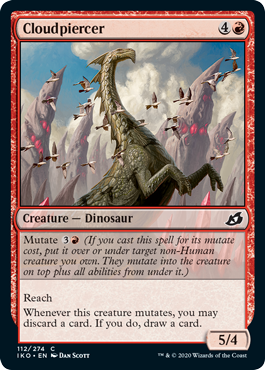 So, with Ikoria featuring the first Magic set focused on a world dominated by monsters, how do we translate that into our Collector Boosters? 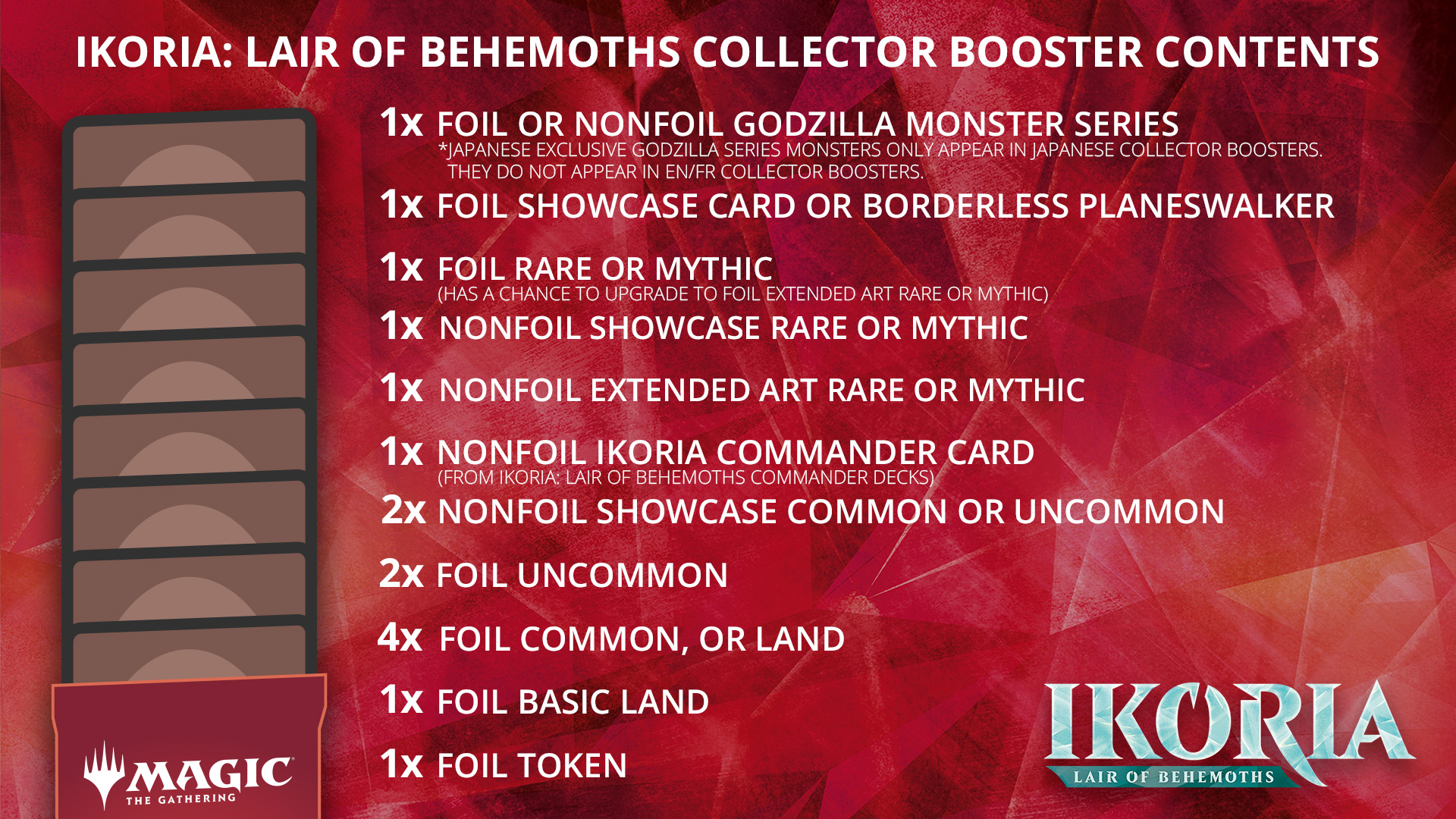 For Booster Fun, this time, we wanted to go in a direction that played off the emotion and energy conveyed by Ikoria's monsters. Something, pun somewhat intended, larger than life. After many explorations, we settled on a comic book style. Super-huge, in-your-face monsters exploding out of the cards at you, hitting you in the cornea like a comic book onomatopoeia! You know, something really "WHAM! BLAM! KAPOW!" 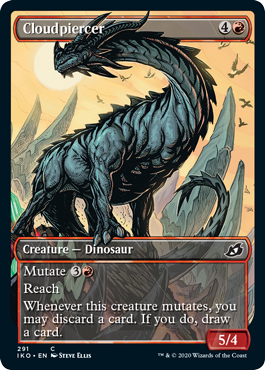 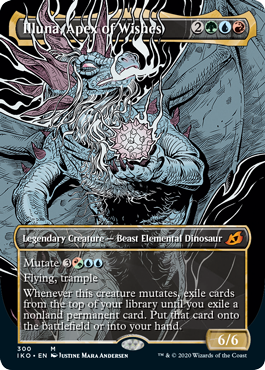 Talking with James Arnold, the graphic designer who helped build out the showcase frames, he hit on how, philosophically, the big idea behind the alternate-art mutant frames was to really push the idea of that larger-than-life mentality. These are supposed to be some of the biggest, baddest creatures the game has ever offered up, and we wanted them to have that movie star treatment. Not even the frame would be enough to contain the over-the-top energy and aggressiveness these mutants have to offer. In essence, the frame is trying to do what we all should if we were to ever encounter these mutants: get out of the way! 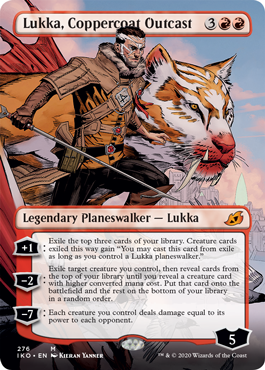 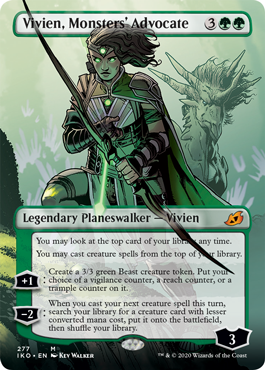 Lukka highlights a different approach to living in a world filled with monsters. Instead of being antagonistic toward the monsters, Lukka decides a more novel approach is the best way to adapt to the environment. He and the monsters form a bond with each other to deal with this environment. We loved this approach as we saw it as a natural connection. While Ikoria has plenty of harming monsters, there are plenty of lovable and charming monsters to team up with as well.

There is one additional showcase treatment that you could get in the showcase rare or mythic rare slot featuring amazing new lands, but we can't show you those just yet! 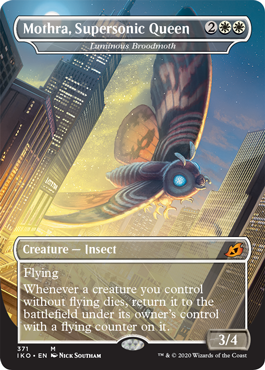 As we worked on Ikoria: Lair of Behemoths, we knew we had an amazing opportunity to tap into the cultural phenomenon of Godzilla. Magic was finally going to a world filled with its most epic monsters, so it was too good of an opportunity to miss partnering with the Toho Corporation and its iconic monsters such as Godzilla, Mothra, and King Ghidorah. We call these cards Godzilla Series Monster cards.

Here is how you can get these Godzilla Series Monster cards (click the image below to magnify in order to scroll through):

WPN stores will have a foil Godzilla card as part of the Buy-a-Box promotion in addition to a single-card box topper pack that comes with each Draft Booster box. So if you preorder from your local WPN store, you can get two cards featuring Godzilla Series Monsters.

Each Collector Booster has a dedicated slot which will have either a foil or non-foil Godzilla Series Monster. In this slot, you can get either one of the 15 worldwide box toppers or the Buy-a-Box (non-foil only). Japanese Collector Boosters may also contain one of the 3 Japanese-language exclusive cards. (Please note, this is different than originally communicated. For more information, click here.) 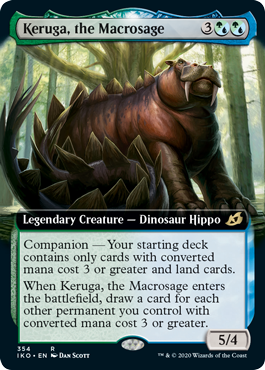 Extended-art treatments continue to be a popular way to show off a little something extra in decks. For each rare or mythic rare that doesn't have a showcase or borderless treatment, we want the Collector Booster to highlight each of those rares with a cool treatment of its own. Collector Boosters remain the only way to get extended-art rares and mythic rares.

Here, we see the new companion mechanic combined with an extended-art treatment. One of the things that appealed to us about companion was how it let you pick a monster to team up with and build a deck around. Much like how Lukka has a bond with his monster, the companion mechanic opens up new deck-building possibilities and grants access to a guaranteed monster right from the start of the game.

How do I find all of these cool cards?

What types of cards can I get if I buy a Draft Booster?

Along with all of the awesome cards of Ikoria and their foil versions, you can get showcase mutate cards, borderless planeswalkers and borderless Triomes in both foil and non-foil. In Japanese-language packs, you can also get 18 of the Godzilla Series Monster cards in foil and non-foil. The 19th Godzilla Series card, Godzilla, King of the Monsters can be obtained through the Buy-a-Box promotion at WPN stores while supplies last.

In addition, every display box of Draft Boosters will have a one-card box topper pack sealed inside of the display. That pack contains 1 of 15 of the Godzilla Series Monsters in all languages except Japanese, which has 18 possible cards. Godzilla Series box topper cards will always be a foil when coming from the one-card pack.

What types of cards can I get if I buy a Collector Booster?

Every Collector Booster contains the following:

In Draft Boosters, you get more cool treatments than before. Ikoria really brings our visions of Booster Fun to life. showcase mutate commons and uncommons show up in about 1 in 3 packs. Showcase rares or mythic rares, including mutate cards and the showcase lands, are in approximately 1 in every 14–15 packs. The borderless planeswalkers show up every 3–4 boxes. Japanese Draft Boosters have Godzilla Series cards 1 in every 12 packs. Foils of everything mentioned above exist with 1 in 3 packs having a foil.

Whether you are opening a Draft Booster pack or a Collector Booster, I hope you enjoy all these amazing treatments for Ikoria. We really have gone all out creating new, expressive ways to bring joy to Magic cards. I hope you find the treatments that you love and build an awesome deck around them.