Crawling in my skin is this itchy, uncomfortable feeling that we've been here before, that Zendikar has shown us how angry its land can get—and exactly what the consequences are when someone, or something, seeks to wound Zendikar itself.

These wounds, they will not heal no matter what the plucky Gatewatch accomplished. Zendikar still hurts from the Eldrazi invasion. It is, well, restless. 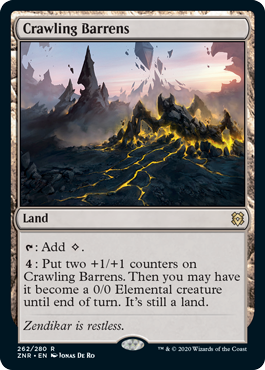 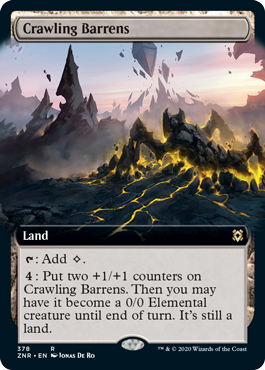 Confusing what is real, meanwhile, is how Zendikar ended up where it is now. When Ugin, Nahiri, and Sorin trapped the Eldrazi on Zendikar so long ago, they may not have fully understood the consequences of their actions. When Jace and Sarkhan accidentally freed them, they definitely didn't understand the consequences. And when the Gatewatch defeated two of the Eldrazi titans, well, that story probably hasn't played itself out yet.

There's something inside me that pulls beneath the surface of what this card offers. Sure, on its face it's a creature land that activates for four mana. Simple. Somewhat unassuming. But it's an activation like we've never seen before. Each time you activate it, it grows larger. Raging Ravine had a similar gimmick, but Crawling Barrens is going to be the de facto mana sink in Standard—and likely other formats as well.

Consuming, confusing, and smashing are the names of the games for Modern Eldrazi Tron, a place this land is certain to, well, land. Right now, that deck plays a few utility lands outside the Urza lands, and having a place to dump excess mana could help it leap past some others on the list. I just can't help but imagine the possibilities of this card. Drop some threats on turns 1–3, and then if you hit Tron on turn 4, you can actually fire this up and still cast a spell. Or fire it up twice while waiting for your opponent to blink first. Or maybe it sits next to Walking Ballista in another deck looking to turn its infinite mana into something that kills the opponent. Or maybe a million things. I can't really look at this card without a million ideas coming into my head.

This lack of self-control I fear is never ending, but in this case that's a good thing. The simplicity of this land and the fact that we've never seen anything really like it before opens up possibilities in basically every format.

Controlling this in Standard, for example, might be key to winning control matchups, even though it only makes colorless mana. It's a mana sink for when neither side is willing to blink or tap out, it's a threat that can pressure planeswalkers, and it gets the counters whether you turn it into a creature or not.

I can't seem to come up with any similar scenarios for Vintage, but Legacy has an Eldrazi deck that could possibly benefit from this, and Commander can use as many utility lands as it can get—I imagine colorless decks based off any of the Eldrazi will leap at this land to replace either one of the lesser colorless lands or a Wastes.

To find myself again drawn to a creature land is a refreshing feeling. I grew up with Stalking Stones and Faerie Conclaves honorable creature-land Kjeldoran Outpost. Like these before it, Crawling Barrens makes you work for it, but pays off handsomely if you do.

My walls are closing in, what with the pandemic limiting in-person play these days. It might make this article read a bit disjointed and my thoughts spew on to the page. But it's really hard to overstate just how strong Crawling Barrens truly is.

That there's just too much pressure to take when you're trying to make these kinds of calls about future cards.

I've felt this way before. I once thought Duskmantle Seer was the future of Standard. On the other side of the coin, Gifts Ungiven felt incredibly powerful when I first saw it. Time will tell how powerful this land ends up being. But I'm going to go out on a limb and guess we'll be seeing a lot of it.

So insecure is where I'll stand as the results roll in. But mark my words—we'll soon all be humming the same song in our heads.