I should have attacked into the Bobs. After sixteen rounds of heroic underdog play against the most powerful two-card combo in Grand Prix history, I was going to lose to a play covered in the first chapter of "How to Misplay Against Your Opponent's Dark Confidants." That was really how it was all going to end?

I don't remember where I was when I first heard the rumors. Something, something, "power-level errata" and suddenly the Magic world had a deck that could kill its opponent on the second turn. Something called "Flash Hulk" made Legacy, a format not unfamiliar with powerful combo decks, a tinderbox ready to be lit. There were even lunatics claiming they could kill on the first turn with a well-placed Gemstone Caverns. What was the deal?

Flash, to that point a ho-hum Mirage card that had always been just shy of reaching potential greatness, had been errata'ed to allow you to trigger enters-the-battlefield and leaves-the-battlefield abilities of creatures you dumped into play with it. This was a big deal; now you could cheat into play powerful creatures that could trigger powerful abilities for just two mana. The hive mind had quickly come up with a killer teammate for Flash: Protean Hulk. There were all manner of creatures you could fetch up with the Hulk in order to kill your opponent, but the top deck builders settled on a convoluted combo based on Carrion Feeder, Karmic Guide, and Kiki-Jiki, Mirror Breaker.

The combo was tricky: You Flash in Protean Hulk, which dies. You fetch up Carrion Feeder and Karmic Guide. The Guide returns Protean Hulk, which you sacrifice to Carrion Feeder. That allows you to search up Kiki-Jiki. Copy Karmic Guide with your legendary Goblin, then while the ability is on the stack you sacrifice the Kiki-Jiki to your Carrion Feeder. When Kiki-Jiki's ability resolves, you get a copy of Karmic Guide, which conveniently returns your Kiki-Jiki from the graveyard. You repeat that process over and over again until you have sufficient Karmic Guides to attack your opponent for the entirety of their life total. How complex was this combo? Famously so complex that when eventual Grand Prix Champion Steve Sadin comboed off for the first time against eventual finalist Owen Turtenwald early in the tournament, he assumed Owen would concede after he resolved Flash with Hulk in hand. Instead the future Hall of Famer made Sadin go through the motions. Steve realized he wasn't sure exactly how the combo worked and was forced to awkwardly beat down with Karmic Guide and Protean Hulk.

But I'm getting ahead of myself.

My local Magic community in Iowa was up in arms about the powerful combo, as many of us were planning to battle at the upcoming Grand Prix Columbus 2007. The question everyone had to answer was whether they would play Flash Hulk or they'd play something to beat Flash Hulk. There was never a question in my mind of which one I'd be playing; I don't watch Star Wars to root for the Empire. After a number of attempts at various rogue strategies, I settled on an aggressive black deck based on an old Mike Flores build that focused on two things: beating Flash Hulk through fast starts, hand disruption, and efficient beatdown; and beating decks trying to beat Flash Hulk by playing combo-disrupting cards like Meddling Mage and Jötun Grunt alongside creatures with protection from white to dodge Swords to Plowshares.

I've been called a lunatic, but in the 25 years of Magic my favorite times to play have been when the game seemed most "broken." Academy Winter? I had my first tournament success at the State Championships with a counter-Merfolk deck and the strategy of mulliganing to five cards to reduce the power of my opponent's Windfall. The Extended season after Rickard Osterberg won and every deck was busted? I ground my way through PTQs with a boring old Goblins deck that was shockingly well placed in the metagame. I love an underdog story, and in Magic, you get to be the underdog!

So I found myself at Grand Prix Flash Hulk, fighting for the Rebellion, hell-bent on winning one for the good guys. And we almost got there. Tim Aten convinced me to cut my main-deck combo of Serum Powder and Leyline of the Void for Umezawa's Jitte and Hymn to Tourach the night before the tournament began. Leyline shut the Flash Hulk combo down and Serum Powder maximized my chances of hitting it in my opening hand, but Jitte and Hymn were solid against Flash Hulk on their own and much more powerful against the rest of the field. I managed to squeak into the second day with an X-2 record, the best I'd ever done at a Grand Prix at that point in my career. I needed to win out to make the Top 8.

To do that, I had to get through Paul Cheon in the final round, my first time in a feature match. Back then, Paul was a big deal and I was mostly a writer, but I managed to take him down despite all the bright lights. I had beaten my share of Flash Hulk decks throughout the weekend, just like I planned, which brought me to the semifinals against the Flash Hulk deck played by Steve Sadin.

We split the first two games, and in the third I had gotten an edge in the ground game. Steve had managed to get together two Dark Confidants, but he was getting low on life when he flipped up a Force of Will and took 5. That was when I made the colossal mistake: I tricked myself into thinking that if I just let the Bobs stay on the battlefield Steve would kill himself over time. Ten years later I still wake up in cold sweats, sleep screaming, "ATTACK INTO THE BOBS!" My wife will tell you. Force of Will, Karmic Guide, Kiki-Jiki, Protean Hulk . . . so many expensive spells to dome Steve for lethal!

So I didn't attack into the Confidants; Steve used them to find a Sensei's Divining Top, made sure his life total stayed at a safe threshold, and waltzed into the finals for a rematch, which he won, against Owen. The Empire was victorious: the most powerful two-card combo in tournament history proved it was as good as everyone thought.

Grand Prix Flash] Hulk turned out to be one of the most important Grand Prix in Magic history. Not only was it attended by more future Wizards R&D members than almost any other (myself; Zac Hill; Billy Moreno, who designed Steve's winning deck; Tom Lapille; Sam Stoddard; Paul Cheon; and Adam Prosak—DailyMTG's own Blake Rasmussen even lent me the Leylines in my deck!), but it taught us a great deal about how Magic works and what can happen with power-level errata. It's fitting that such a critical event and defining tournament combo would be represented in Masters 25. 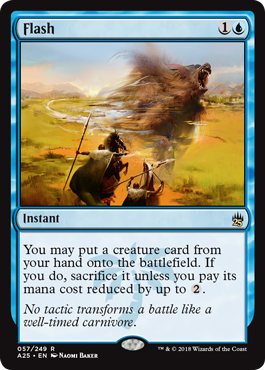 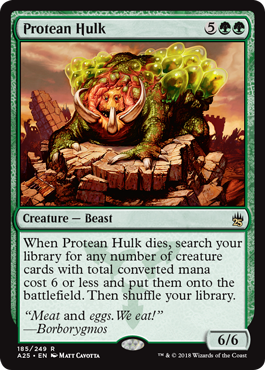 As for me? I figure enough time has gone by that drafting Flash Hulk in a 40-card format makes you the underdog. So here's hoping your first pack features Protean Hulk and your opponent ships you the Flash!