I've built many Commander decks in my time playing the format—and most of them are completely and totally overpowered. Decks helmed by legendary creatures like Selvala, Heart of the Wilds; Breya, Etherium Shaper; Golos, Tireless Pilgrim; Azor, the Lawbringer, all aimed at generating a game state where it's inevitable that I win.

However, my favorite deck to play, no matter what the power level, is helmed by Sakashima the Impostor. Yes, it's a clone deck, where there's no win condition until your opponent plays one. It contains everything from the expected (Cloneduh) to the unexpected (Unstable Shapeshifter)to the downright weird (Shapeshifter's Marrow).

One of the clones that I was loathe to exclude from this deck was, ironically enough, one of the major reasons I wanted to build it in the first place: Jwari Shapeshifter.

After a long break from Magic, I came back during Zendikar and Worldwake Limited, and as a fan of Slivers back in the day, there was something about Allies that just made me smile. I still remember when Jwari Shapeshifter was previewed and thinking, "Now, there's a card that I want to play in Limited Allies."

(I would go on to draft the most ridiculous Ally mill deck in my Magic career. It included a Jwari Shapeshifter, 2 Halimar Excavators, 3 Hedron Crabs, and a bunch of other Ally creatures to help trigger the Excavators. It was bonkers, and I still regret doing that to my opponents.)

I love this card. It's one of my all-time favorites from my experience in Zendikar Limited, and even though it didn't win me as many games as some of the other Limited all-stars of that format, I still have a soft spot for it to this day. Plus, who doesn't love a good clone effect? Copying stuff that's on the battlefield is just really, really fun. When I was looking into building a clone Commander deck, Jwari Shapeshifter was a card that briefly came to mind.

However, the problem with Jwari Shapeshifter in Commander is that while the cost is incredible (a mere one generic and one blue mana), the drawback is—well, significant. The ability to copy only an Ally creature is narrow enough that it's not able to be played in anything but the most dedicated Ally deck. While my love for the card was high, the number of Allies in my Sakashima deck was not. Understandably, it didn't make the cut, but it did serve as the inspiration to make the deck in the first place.

I always wondered, though, what a clone effect in that Ally archetype might have looked like if it was a little less narrow but still played in that space. There have been so many variants of the clone effect since the original Clone in Limited Edition Alpha, whether it's got flash like Stunt Double, shifts power and toughness like Gigantoplasm, makes it an illusion like Phantasmal Image, allows it to copy planeswalkers like Spark Double, or many others. Why not try to create a clone that works within a mechanic, but is still playable in broader decks?

Well, with the party mechanic coming down the line in Zendikar Rising, those madmen in the Tabletop Studio figured out a way to do it. Say hello to the newest member of the clone family, Glasspool Mimic. 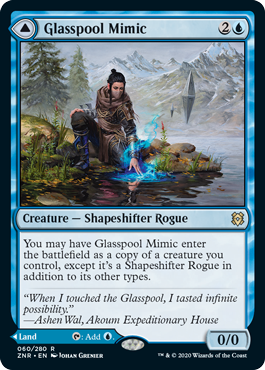 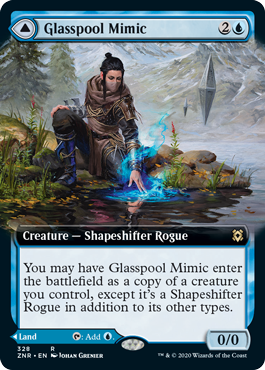 Glasspool Mimic follows in the footsteps of Jwari Shapeshifter in that it's cheaper than the run-of-the-mill four-mana clone at three mana and has a drawback (it can only copy creatures already under your control). It also has a decent relation to a new mechanic in Zendikar Rising. Notably, Glasspool Mimic will retain its original creature types of Shapeshifter Rogue in addition to any other types it may copy—a key piece if you're looking to assemble a party in Zendikar Rising.

If that wasn't enough, Glasspool Mimic also has another feature: it's a modal double-faced card! Clones like Glasspool Mimic are powerful because they're adaptable, and this one can adapt in one other major way: it can be played as a land. 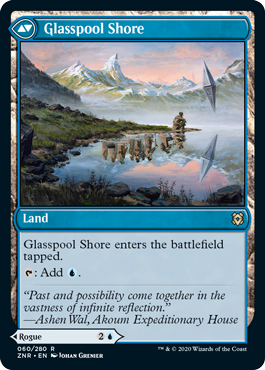 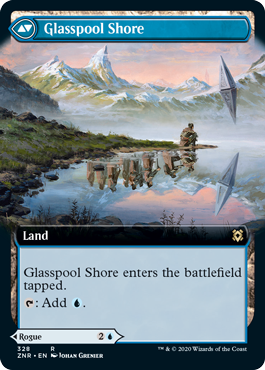 If you don't want to copy a creature you control and are hurting for a land drop, don't worry! Glasspool Shore has you covered. As the other side of this modal double-faced card, you get to choose how to deploy it. There's nothing more adaptable than that.

While this card will be an auto-include in my Sakashima the Impostor Commander deck, I'm also excited to see it played in Zendikar Rising Limited, where it potentially ends up as a dual-class party member, a copy of a massive creature you already control, or even a land drop when you really need it.