Divine Intervention isn't a card most players are familiar with. It has a bit of a higher profile because of the unusual text that ends the game in a draw, but realistically, there's only so many people out there who get excited for an eight-mana enchantment from Legends that does nothing but count down to the Magic version of sad trombone noises. It's a bit of history and a curiosity, but not much more.

Over the years, the recognition that a draw is fun for exactly zero players meant we only saw one more card that drew the game, albeit only if its "win the game" condition wasn't met.

In both cases, the charge was clear—survive long enough, and this enchantment would decide your fate. Even if that fate was sad trombone noises.

Thankfully, we've learned our lesson and have passed on drawing the game and moved on to either winning the game outright

You jump through some hoops, meet some challenges, play the game from a different angle, and your reward is sweet, sweet victory. Each of these cards created a little sub-game. Get them to 13 life. Cast this card twice. Have a really, really, really large deck.

But there's another subset of these cards that take their queues from Divine Intervention and Celestial Convergence. The kind that simply ask you to be patient. Protect yourself. Protect the card. Eventually, you'll get to win.

But, absent a few Vraskas, most of these cards were just asking one question—can you do the thing? If you did the thing, you won. Or they lost. Or you made sad trombone noises. But rarely were these alternate-victory cards so veryjudgmental. 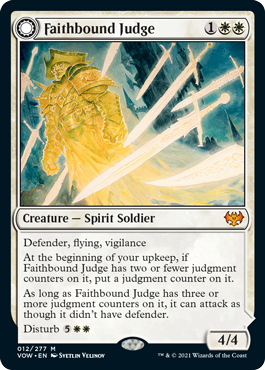 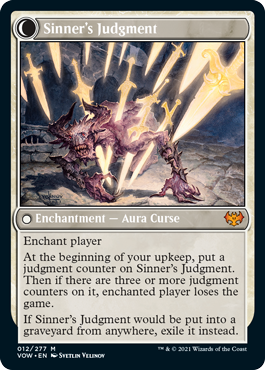 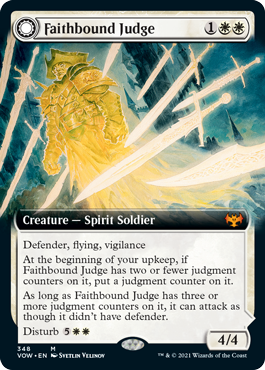 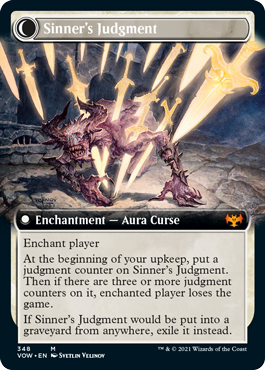 The front side is a victory condition only insomuch as it's a creature that can, eventually, attack. For a bit of patience, you get a 4/4 flying vigilant Spirit that makes you feel really guilty about lying to your mom about that extra cookie. On its own, that would be a fine, undercosted creature with a relevant Spirit type.

But then he wouldn't have much to be so judgmental about. That's where the disturb side comes in:

In the great tradition of Divine Intervention, you pay a lot for an enchantment that doesn't affect the board (seven mana instead of eight), and then you wait. And wait. And wait. But this time?

The fact that it's a Curse does have some applications, but those mostly don't matter for many of the Curses-matter cards. Because it's on the disturb side, you can't use something like Bitterheart Witch to search it out.

It's probably correct to think of the Curse side as a bonus should you find the game stalled out—but that's what makes it interesting. The reason Divine Intervention, Celestial Convergence, and Azor's Elocutors have been cast aside is because their primary condition is waiting, and waiting, and waiting.

Not a one of them could attack for 4 damage in the air.

So how do we use Faithbound Judge // Sinner's Judgment? It's likely we're looking at playing Spirits or even just a white-blue fliers deck. The goal would be to just attack a bunch in the air while getting additional value from dead or dying Spirits along the way.

Patrician Geist is the highlight here, as not only does it make your Spirits bigger—and turn Faithbound Judge into a chariot-smashing 5/5—but it makes those disturb costs just that much more attainable.

That's a pretty rough outline, and it could probably use more Spirit synergies to make it worthwhile to stick with Spirits specifically. There's also some tension happening here—yes, Patrician Geist makes your disturb costs cheaper, but they also make Spirits bigger, so if its alive, you're probably not casting any judgment on sinners when you could be attacking more freely. But maybe we try not to attack so much and actually ramp our way to cursing our opponents?

4 Saw It Coming 3 Divide by Zero

Again, this is rough, but what if we use The Celestus, Rootcoil, and Teferi to ramp? Faithbound Judge can find its way to the graveyard either through Faithful Mending, Divide by Zero, Doomskar, or just being a 4/4 that your opponent has to deal with. Then you get out Sinner's Judgment and sit behind a few counterspells, wraths, and some life gain 'til they've been soundly judged.

Those are just some of the possible ways to count down (or up) to your opponent's judgment. Do you have more ideas? Send them my way @blakepr on Twitter. Or scream them at me as we pass on the street. Either way, I won't judge.