Magic is a game full of options.

You choose what cards to put into your deck. You choose whether to keep your hand. You choose to play lands and cast spells. You choose to attack and block. At the end of it all, you win or lose—and many of your choices along the way will be the reason why.

So, the more options you give yourself, the better your chance of having the ability to access the right thing at the right time.

Tiago Chan's invitational card (getting to create a card was the prize for winning the old Magic Invitational tournament) made waves instantly when released in Innistrad. The card has not only seen Standard play but play in Magic's most power-laden competitive formats: Modern, Legacy, and even Vintage. It's a high pick in Cube Draft, a solid Commander choice, and just an all-around all-star.

For just two mana, you get the flexibility of using any instant or sorcery in your graveyard—and the bonus of a creature to boot.

Another card that has made a pretty big impact in Standard over the last two years is this big machine:

It's another blue card that lets you reuse your spells. It's shown up in all manner of control decks, where it has drawn cards and removed creatures time and time again.

What is this all leading up to? Well, today, I'm excited to reveal another card in this highly respectable lineage.

If you like Snapcaster Mage and the kinds of options it gives you, have I got a Guilds of Ravnica preview card for you.

Take a look at Mission Briefing: 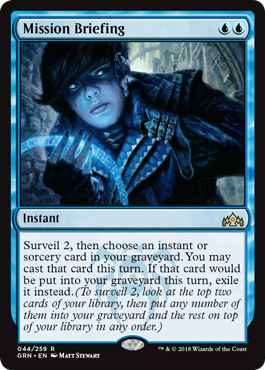 This card is stellar. While you don't get the 2/1 body—certainly a huge strength of Snapcaster is that extra creature body—the surveilling here is also far from flavor text. Keeping in mind you can even think about comparing it to one of the best blue cards ever in Snapcaster Magewell, that's pretty telling.

But why is that the case? What gives Mission Briefing the framework of a staple for spell-heavy blue decks?

Let's dig into it.

On its surface, I think it's pretty fair to ask the question, "Why would I pay two more mana for a spell in my graveyard instead of just putting a different card in my deck for which I won't have to pay extra mana?"

And that's a fine point. The rate on any spell you cast with Mission Briefing is going to be significantly worse once you tack two additional mana onto it. Essence Scatter at four mana is an expensive Cancel. Vraska's Contempt at six becomes pricier than an entire board sweeper. Even Lightning Bolt just turns into Open Fire.

And yet, it's still worth it. It's still excellent. Why? Because you have the option to let it be whatever you want.

When you're building your deck, you are choosing a variety of cards because of how well they fit your strategy. You're picking them because you want to draw them and have access to them. Mission Briefing just increases the chance you get to use them again.

Moreover, it's the right thing when you need it to be. Let's say your control deck plays both Essence Scatter and Negate.

Essence Scatter is great against creature-heavy decks like quick, aggressive decks and midrange. On the flip side, it's pretty weak against control decks; control decks generally have very few creatures to counter.

Negate is generally the opposite: it's weak against the creature-heavy decks, but shines against decks featuring a lot of noncreature spells—like control.

As the game goes on, Mission Briefing is whichever one of these cards you'd like for it to be.

Let's say you draw a hand containing Negate, Essence Scatter, and Mission Briefing. This lets you double up on whichever of the effects is stronger in the matchup. If you need that second Negate, you have it!

And, of course, these kinds of options are especially excellent in the late game. If you draw a Mission Briefing and your graveyard is plenty stocked, it's basically like you drew whichever instant or sorcery card you wanted out of your graveyard!

Mission Briefing gives you whichever effect you most need from your graveyard, and that two mana is a low price to pay for the power.

That's all to say nothing of the surveil part of the card. Speaking of, let's talk about that next!

This whole card so far has been about widening your options, so how about we provide you with even more?

The new surveil keyword in Dimir (blue-black) is all about giving you the card you want. On top of the primary effect of this card, surveilling lets you dig deeper into your library to give you just the card you're looking for.

Part of the strength of a card like Snapcaster Mage was that it also put you up a card overall: you received a permanent creature and a spell in one card. In card advantage terms, it's an inherent two-for-one.

Another understated strength of Snapcaster Mage is that you can just slam it on turn two as a blocker if need be. Well, Mission Briefing also has the ability to come down on turn two when needed, but in a totally different way.

If you're light on lands or really need to find a specific card, you can always cast Mission Briefing just to look ahead and try to dig into the card you need. Ideal? No—but it certainly works in a pinch.

And then there's how the abilities work together.

You don't need to choose your instant or sorcery card for Mission Briefing until after you have finished surveilling. That means you can find just the right card in the top two cards of your library, put it into your graveyard with surveil, and then cast it right away! One notable problem that cards like Snapcaster Mage have had is that if you don't already have the right instant or sorcery in your graveyard, their effect doesn't give you what you'd like. Mission Briefing's surveil makes it all the more likely you'll find just what you need.

Mission Briefing's surveil helps ensure that I find the mission I want to go on.

This Message Will Self Destruct in Ten Seconds

Mission Briefing adds an interesting deckbuilding wrinkle to blue control and spell-heavy decks, and I would definitely expect it to show up in Standard—and potentially formats with a wider card pool as well. I think you'll find your decks will want to play a wider variety of spells, too. It means in a long game with Mission Briefing, you'll have even more possible options to consider!

As you're building up your new Standard decks, give Mission Briefing a try. I know I started it as a two-of in many of our decklistsand quickly it expanded to three or four copies.

I hope you're enjoying Guilds of Ravnica previews so far! The set was a delight to work on, and bringing Ravnica to life once more means so much to me. The first Ravnica set was when I really started taking Magic more seriously, and Return to Ravnica was the first set I worked on at Wizards, so to have another one come out and work on it with all the design experience I have now—well, it really brings things full circle.

Have any thoughts or feedback? Let me know! You can get in touch with me by sending over a tweet, asking me a question on my Tumblr, or firing off an email to BeyondBasicsMagic@gmail.com.

Have fun exploring the city of Ravnica, and I'll talk with you again soon!