Our adventure starts with a humble party of game designers traveling down a long and winding road. They spent their time roaming the lands and defeating any pesky game design questions that they encountered, hoping to eventually gather enough powerful and cool Magic cards to share with the kingdom. One day, while sitting at their campfire after a long and taxing adventure, the bushes began to rustle—

"Awake, my party!" shouted Jules Robins, a powerful wizard hailing from the coast that also happened to lead this trusty group of adventurers. "We are being attacked by game design questions!"

"I recognize these rustles," Andrew Veen, a former wizard who also happened to be from the coast, warned the party with his wisdom: "I've battled against these game design questions many a time before. They are hearty foes, not to be underestimated."

Out of the tremoring foliage, a mighty group of game design questions emerged and showed their spears, claws, scales, wings, fangs, beaks, eyes, and so on. They appeared as such:

"Wait, we've got just the mechanic for this!" a voice beckoned from behind. It was Corey Bowen, the most handsome and coolest adventurer of the group. Coincidentally, Corey was also a wizard from the very same coast. "We can just roll twenty-sided dice!"

"In black border? Will the player base accept that?!" Jules asked.

"Many players love mechanics that embrace randomness, like cascade and coin flipping. As long as we make the cards fun to play, fun to play against, and really cool overall, they'll gladly accept them!"

Corey had experience designing coin-flip cards in his last quest on Modern Horizons and loved rolling dice when playing Dungeons & Dragons with his companions around a campfire. He knew just what would make this new mechanic fun for every player while satisfying true lovers of randomness. And thus, he began to weave a brand-new Magic spell: 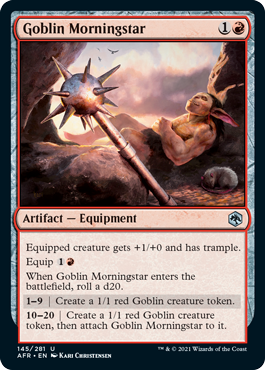 Goblin Morningstar is an Equipment card using a brand-new mechanic that asks the player to roll a d20. When this card enters the battlefield, you roll a twenty-sided die! Depending on the value rolled, the ability of this card upgrades based on the die table written on the card.

"Of course," the wizards agreed, "we'll use die tables, just like in Dungeons & Dragons! That way, we can control the randomness of the range on each effect and the card will appear as if we took it right out of a Dungeons & Dragons adventure module!"

"Exactly." Corey continued, "And there is nothing more iconic to Dungeons & Dragons than rolling a d20. As long as players are rolling this familiar icosahedron in their games, they're bound to feel like they're sitting at a Dungeons & Dragons game, rolling for their ability checks!"

Corey had taught the other wizards his philosophy in designing these spells:

Jules had also partaken in many a role-playing game and knew that the most anticipated and beloved moment of a die roll is rolling a 20. He began to design spells that would produce an incredible increase of effect in their power on the slim chance the user rolled well was very skilled! And thus, he cast his take on this kind of Magic spell: 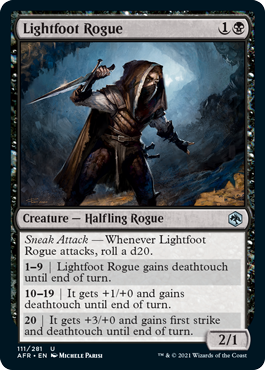 When Lightfoot Rogue attacks, it gains deathtouch and the possibility of added power. You know that it can trade with any blocker with deathtouch, so the outcome of the roll helps it deal more damage to your opponent if unblocked. But on a 20? This little halfling is nigh unbeatable in a fight, as a combination of first strike and deathtouch will fell any blocker, leaving the rogue unscathed!

"That's it!" the wizards exclaimed! With more restrained variance from Corey's philosophies, rolling a d20 didn't have as many high-reward moments. But adding outcomes for critical hits on their card designs was a surefire way to keep players excited and tensions high!

The wizards began to design more and more cards with the d20 mechanic to vanquish all the game design questions in the surrounding area. While the new cards began to populate the set design file, they began to find different ways to build cards that supported decks filled with the mechanic.

"What if we add +2 to rolls with this uncommon build-around?" murmured one wizard.

"I don't think that's quite satisfying," countered another. "It can get pretty math-y sometimes. And it'll be hard to feel like it matters a lot of the time. If our table ranges are mostly 1–9 and 10–20, then the +2 only matters when you roll an 8 or a 9. That's only 10% of the time. Is there another way to improve dice? What do they do in the latest edition of Dungeons & Dragons?" 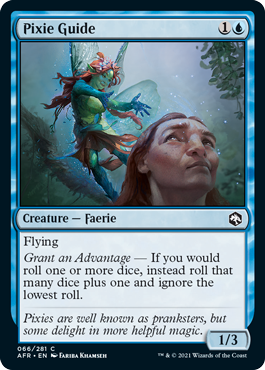 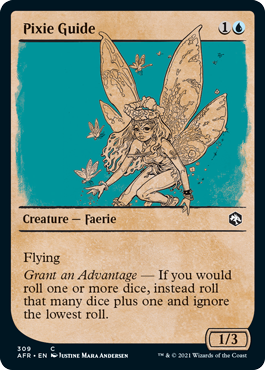 Pixie Guide is a common that helps your die-rolling decks. Just like in Dungeon & Dragons 5th Edition, if you have advantage with Pixie Guide, you roll an additional die and take the higher result. Rolling twice as many dice was even more fun than rolling one! It also felt more impactful with every roll, since it genuinely feels like you have two fair chances at success. Pulling advantage from D&D and putting it straight onto this Magic card was a perfect fit.

And so, the game design questions were felled. The wizards had designed d20 cards across the set and had even centered them in the blue-red color pair. When they returned to the kingdom to show their findings to the monarchy, the kingdom rejoiced. The queen had always loved the chaotic vibes from traditional blue-red aligned factions such as the Izzet League and Prismari College. They found a happy home playing these cards while playing the Dungeons & Dragons: Adventures in the Forgotten Realms Prerelease in the kingdom's Ye Olde Local Gamery. And they celebrated the fact that their Prerelease kits each came with traditional d20s instead of spindown counters, so their rolls would be truly random. All was well, and the mighty Wizards from the Coast completed their quest, being rewarded with bountiful experience counters and many Treasure tokens.