t's no secret the Selesnya are the top of the token-making food chain. While Call of the Conclave and Coursers' Accord are potent and demonstrative in their own right, the new toys for the Selesnya Conclave in Dragon's Maze crank this to eleven.

If you aren't checking out the (updated daily) Card Image Gallery for Dragons' Maze you may have missed Advent of the Wurm and Trostani's Summoner. Making creature tokens, powerful ones at that, will be easier than ever in just a few weeks.

Since creating tokens is the typical activity of the guild, leading these tokens well is what it takes to rise in the ranks. Return to Ravnica's Trostani, Selesnya's Voice rewards you upon creating the tokens, and helps you create a few more along the way. If you've played with the Dryad you know how quickly this can get out of hand.

What Trostani doesn't do is protect these tokens. Creating more tokens one at a time usually won't replace them fast enough against an enemy determined to do so. And while 3/3 green Centaur creature tokens can quickly stamp an enemy to death in Limited, the 40-starting-life-and-Dragon-sized-creatures world of Commander asks for a different approach. Keeping your slice of the Conclave alive is essential. 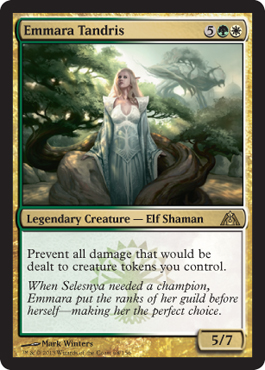 Neither Dragons nor deathtouch can destroy the Conclave with her around.

There are lots of ways to go about building a token deck. Emmara loves them all. What she cares about is simply that there are creature tokens.

While she doesn't protect herself, her damage-prevention ability is a security blanket for all your tokens. When she's in play, even a lowly 0/1 green Plant token can step in front of anything and survive. You'll still need other countermeasures against things like Supreme Verdict—Rootborn Defenses is a solid choice—but fearlessly attacking and blocking makes every token more dangerous than you'd expect.

Playing to win with tokens in Commander can be tricky. Dealing enough damage to defeat opponents will often require several strikes. Emmara won't give you more tokens to work with, but she will keep them alive a little longer to do your dirty work. That's why last week's prompt asked for token makers that fit into a green-white Commander deck: To make your move with Emmara Tandris, you're going to be looking to get creature tokens onto the battlefield quickly and keep them coming throughout the game.

Among all the token-making feedback provided, well over half had more than one of these cards included:

Among token-making capabilities, these rank among the most powerful. Rhys the Redeemed and Doubling Season/Parallel Lives are obvious in utility for quickly swarming the battlefield. Luminarch Ascension can be a surprisingly quick way to 4/4 flying Angel tokens in a multiplayer game. Martial Coup clears away the battlefield while leaving us with an army. All of these cards can be considered staples—usual suspects to see in appropriately-colored decks.

For those of you new to Commander, staples are often where decks start. The power of these cards makes them compelling in different decks, and you often find them in common as choices other players make. But one of the draws of the format are the cards beyond staples that players pick.

My favorite white and green token generators are:

I love Fresh Meat, as it provides a fantastic way to protect your board by converting all of your (ideally) weak tokens into big, nasty tokens. Sprout Swarm went into my first real deck ever, and has a special place in my heart. I was down to 1 with my opponent at 90+, and through a combination of Nacatl War-Pride, Seedborn Muse, and Essence Warden, I won the game with over 200 life. (Nacatl War-Pride—aka Green Mass Removal.)

Sprout Swarm and Armada Wurm are two ways to get tokens going, and using Rhys or something similar to double up tokens created by Nacatl War-Pride is a devastating combination. What makes this selection interesting is that Sprouting Phytohydra is usually a solid token-making choice, but it doesn't work with Emmara, who prevents damage from being dealt to it. Conversely, preventing damage to 0/1 Eldrazi Spawn tokens seems phenomenal—stop the baddie, keep your token, and make more mana? Deal.

Keeping frail tokens sticking around works with other cards too, like Scott's pick-six:

Avenger of Zendikar's starting 0/1 Plant tokens (or 1/2 if you choose to play your land for the turn after casting it) are dangerously frail. The 2/2 Wolf tokens Howl of the Night Pack create are also diminutive for Commander. Spawnwrithe creates more copies of itself, which are still just 2/2s. Mitotic Slime splits into smaller pieces quite quickly. Emmara solves all these problems of frailty by making combat fearless for you.

Scott's call of Twilight Drover serves a similar purpose as Fresh Meat: If Emmara isn't around or tokens otherwise find their way to the graveyard, you have a way of refreshing the battlefield with another wave of creatures. Twilight Drover's happen to fly, too.

Recovery was a theme in choices from Michael:

Some familiar faces appear in Michael's list, but it's the clever Caller of the Claw that steals the show as the predecessor to Fresh Meat. As token makers go, things like Decree of Justice and White Sun's Zenith (two other cards many of you mentioned) will ring as stronger, but none will draw as many laughs as Flock of Rabid Sheep.

Commander is usually exclusive to black-bordered card, but if your local group decides to open the can of the silver-bordered world you end up with a few more choices to work with.

What Michael went on to share are removal spells that also create tokens. Seed Spark has obvious use, but the flexibility of something like Beast Within shouldn't be overlooked. It's the same reason many of you also mentioned Crib Swap and Mercy Killing: Making tokens while destroying things can be helpful even if you won't control the tokens.

Master of the Wild Hunt is something I've put into action alongside Howl of the Night Pack. Seeing a dozen Wolfs pile onto a fatty is a sight to behold, but with Emmara it's downright mean: she prevents the damage that would be assigned through the Master's effect as well.

I, too, am a fan of Aura Mutation in the land of big enchantments. But there's more to remove than just permanents, as Reggie points out:

Night Soil is the ancestor to the Shards of Alara standout, Necrogenesis, but it works in a similar fashion to keep graveyards, and those who would make the most of them, in check. Interestingly, two quiet cards from the Time Spiral era were called out, but they're explained well: slow to start, but quick to take off if they pal around together.

Like the aforementioned Tolsimir Wolfblood, other ways to beef up and win with tokens is handy. John shared some token makers, and their local conclusion:

Ooze Flux is capable of creating truly ridiculous numbers of tokens with a hefty [power/toughness] in a very short span of time. It's a wonderful mana sink in a color that's known for creating vast amounts of mana. The obvious combo is with evolve creatures, but any way you can manage to add counters to your creatures will feed this machine.

Requiem Angel requires no additional investment after the initial casting, and makes tokens out of anything—even other tokens. Combined with Doubling Season, this gets out of control quickly.

Séance plays a role similar to Requiem Angel in that you can get tokens out of just about anything. Sure, some creatures are more useful than others, and you're limiting the number of times you can pull off various graveyard shenanigans, but if this isn't a major focus of your deck, who wouldn't like, say, a free Craterhoof Behemoth for a turn?

The last two picks aren't token creators so much as enablers, but I wouldn't consider playing any token-based strategy without them.

Ashnod's Altar gives you a frightening Plan B if your tokens get stalled. Can't punch through with your army of 1/1s? [Sacrifice them] to the Altar and Genesis Wave for half your deck—something decent should turn up!

Champion of Lambholt/Craterhoof Behemoth have such obvious synergies with tokens that either one is a win-con all on its own. They play nearly the same role—Champion has less up-front cost but requires a little more windup, while Craterhoof wins on the spot, as long as you've laid the groundwork in advance. My suggestion is play both and cover each side.

While he shared far more than I was asking, John did a great job explaining his picks. Emmara can protect tokens from damage, but having ways to ensure they find you victory is appealing in its own right. Well said! 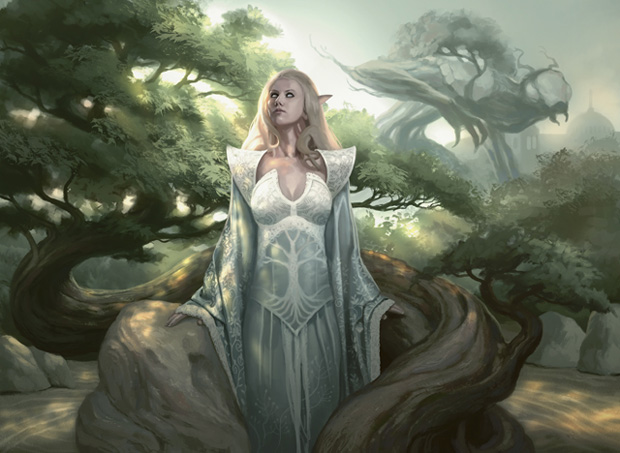 With the net of token-making awesomeness collected, that leaves us with most of what we'd need for an Emmara Tandris deck. Like the Varolz, the Scar-Striped prompt last week, I'd like to give everyone the same chance to add six cards of their choice to an Emmara Tandris Commander deck.

Which six cards that don't produce any tokens would you absolutely include in an Emmara Tandris deck if you were building it?

Making tokens, and including a few things to do with them, are important for Emmara. I'm asking you to share what else is. Unlike when I shared Varolz, the Scar-Striped and exhaustively tried to list ways to approach him, how you handle building for Emmara is entirely up to you. We have plenty of token-making cards at play here already, so I'm hopeful you have other ideas for how we can help her shine.

Join us next week when we finish dredging through submissions and recycle our way into a complete deck. See you then!