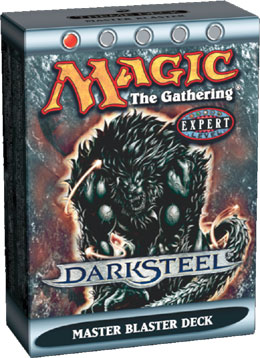 Darksteel Brute is virtually unstoppable. It attacks and blocks forever. It lives through Wrath of God and Naturalize. It just will not die. Your opponents will absolutely hate it. Another troublesome creature for opponents is Duskworker. Because it's very hard to destroy when it attacks, you can just stay on the offensive with it every turn without fear. Most people don't play decks that can block high-powered monsters coming across the table turn after turn, so Duskworker can be pretty intense.

The most versatile card in the deck has to be Gemini Engine. See if you can pull off this trick: Play Grab the Reins (paying the entwine cost) to steal an opponent's Arcbound modular creature (for example, a 3/3 Arcbound Bruiser). Then sacrifice the modular creature to destroy another enemy creature and put its counters on your Gemini Engine so both "halves" get the bonus. Take that, modular guy!

Now let's switch to the "blow things up" end. Pulse of the Forge lets you deal damage over and over--you might actually want to take mana burn in an earlier phase so that you can play this spell again! Fireball is perhaps the coolest X-spell of all time and it can blast multiple things at once, including opponents. Barbed Lightning, like Fireball, gives you a many choices when deciding what or who should be your next target.

There are two main ways to win with the "Master Blaster" deck. The simplest is to attack, and if something gets in your way, blow it up. Strong philosophy. If that doesn't work, try defending with creatures like Steel Wall, Darksteel Brute, and Hematite Golem until you can play Fireball or Pulse of the Forge to take your opponent out-a tried-and-true endgame strategy. 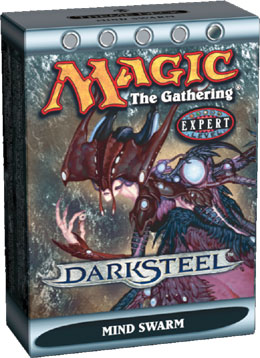 he "Mind Swarm" deck is fun to play because it has multiple paths to victory. At heart it's a black weenie deck that tries to quickly reduce your opponent's life total with aggressive flying creatures. It includes several excellent pieces of Equipment to enhance these creatures. But "Mind Swarm" also features a strong discard theme, and you can use these "hand destruction" cards to disrupt your opponents' game plans before they get going. Geth's Grimoire combines very well with these effects--every time you force opponents to discard a card, you get to draw a card. If you hit them with Wrench Mind, you may even be able to draw two cards!

For the midgame, the deck has a number of decent creature-removal spells. In general, save these for any creature that can stop your fliers from getting through (as opposed to, say, an annoying ground-pounder). It's fine to trade damage with your opponent. Use Leonin Bola to tap potential blockers or to stop opposing monsters from attacking you. If you have multiple untapped creatures and enough mana, you can even use Leonin Bola to tap multiple creatures in a turn; after one creature throws it, just pass it on for another creature to use.

A couple of cards excel in the long game. Relic Bane is a great source of long-term damage. Be sure to play it on an artifact that you won't use another spell to destroy--or an indestructible artifact. Skeleton Shard is a great way to recycle your creatures late in the game.

"Mind Swarm" is designed to play well against other Mirrodin-block decks, with many cards that work well against artifacts. If you come up against opponents playing very few artifacts, you can tune the deck a bit by removing Relic Bane and Emissary of Despair. Potential replacements include any creature with an evasion ability such as fear or flying. More creature removal, or even more discard effects if your opponent is playing a very slow deck, are also good additions. Whether you're squeezing with discards or flooding with weenies, the "Mind Swarm" deck can find a way to make life difficult for your opponents. 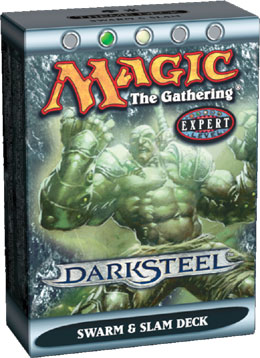 he "Swarm & Slam" deck wins by bringing out lots of creatures, then making them too tough to handle. Once you get started, you'll never stop producing creatures--except to improve on them. If you get a little time to build up, you'll have an overwhelming force.

The key card in the "Swarm & Slam" deck is Echoing Courage, since many of your cards create multiple creatures with the same name. A single Echoing Courage turns six 1/1 Insects into 18 damage headed straight at your opponent. For a really nasty surprise, play Raise the Alarm and then Echoing Courage. You suddenly go from no blockers to a pair of 3/3 Soldiers, ready and waiting to chew up your opponent's attackers. A late-game Stir the Pride can be devastating. Giving your multitude +2/+2 and the ability to gain life for you makes for a huge swing.

This deck has several creatures with protection from artifacts, so if possible, save your artifact-removal spells for noncreature artifacts. Because you have many cards--including Stir the Pride, Infested Roothold, Wirefly Hive, Spawning Pit, and Myr Matrix--that help you pull ahead in long games, don't trade damage early in the game. Instead sit back on defense and be willing to trade creatures. In the long run, you'll have many more resources than your opponent. You just need to have the time to play out all your cards.

If you're upgrading this deck, try to select creatures that have the abilities you want. For example, instead of tossing in a Deconstruct, add more Viridian Shamans to make Echoing Courage, Spawning Pit, Thunderstaff, and Stir the Pride even more effective. The "Swarm & Slam" deck can be weak against flying creatures, so adding more Tel-Jilad Archers or even a Silklash Spider or two from the Onslaughtset might be beneficial. And in the Mirrodin environment, it never hurts to have even more artifact removal. 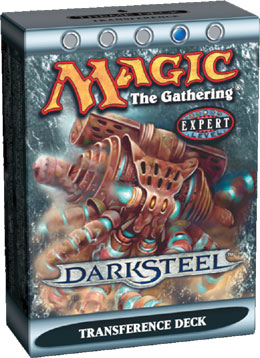 hat's the next best thing to creatures that can't be destroyed? How about creatures that pass along their power and toughness when they're destroyed? The "Transference" deck explores the Darksteel set's modular ability. It runs plenty of Arcbound creatures, all of which have modular, plus there's a little blue for faster mana (that's right, blue for mana!) and some other zany tricks. Drop the Arcbound creatures, send them into battle, and you'll have an 11/11 flier in no time.

Some of the interesting plays in this deck involve eliminating your own creatures to make your fliers bigger. Rust Elemental in particular is a doozy. Have no fear when playing this 4/4 flier, because the Arcbound creatures turn its drawback into a feature. Sacrifice an Arcbound creature to the Elemental and drop those counters right on it. Attack. Repeat as necessary. But just in case "Ol' Rusty" gets out of control, a nifty blue sorcery called Reshape can simply mold it into a whole new artifact. Another keen ploy is to play Reshape on your Arcbound creature and put its counters onto something with a little more "get-through," such as Spincrusher.

Use Neurok Transmuter to spread a little card-type love around. The Transmuter can protect your key artifacts from being destroyed by removing their "artifactness." Then it can turn around and let you put +1/+1 counters on your blue creatures. Go team!

Some simple but effective improvements would help tune this deck. Check out Arcbound Overseer and Arcbound Ravager when looking for new creatures to generate those valuable +1/+1 counters. Spice things up in the air by changing out the Cobalt Golems for their distant cousins, Spire Golems. This deck runs only two Vedalken Engineers, a lynchpin of the Arcbound-Rust Elemental combo threat. Consider replacing Ur-Golem's Eye with an additional Engineer.

The modular ability is exciting in combination with anything that sacrifices creatures as a cost. Just be sure you have an artifact creature with some kind of evasion waiting to get the counters. It's the most fun you'll ever have losing creatures.