Dominaria, once a land of strife, corruption, and turmoil, is now a land of vibrant renewal. Started at the bottom. Now we here. United. With no obvious threats lurking on the horizon, I'd say we have time for a little relaxation. How about some cards? Let's see what thrilling card mechanics, both new and returning, await us in Dominaria United.

Not every creature is built to attack, marching into the "red zone," daring the enemy to engage. That doesn't mean they can't contribute to the attack though, thanks to the new keyword enlist. 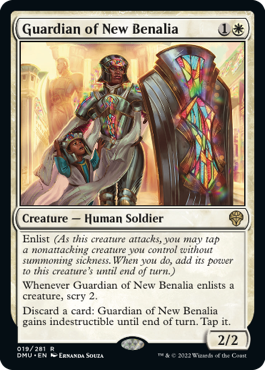 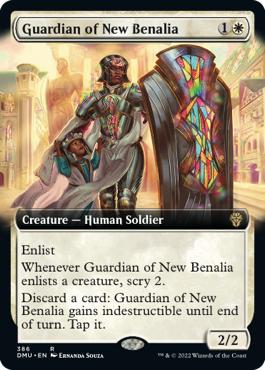 Enlist represents an optional cost to attack. As you attack with a creature with enlist, you can tap a different untapped creature you control that isn't attacking. That creature—the enlisted creature—can't have "summoning sickness," meaning it's been under your control since your turn began or it has haste. This doesn't necessarily mean that the enlisted creature could have attacked. Creatures with defender or ones enchanted with Auras like Pacifism are wonderful creatures to enlist. You can't enlist a creature that's attacking, even if it's untapped because of vigilance.

Dominaria has always been a land of stories. A land of heroes. But the true mark of a hero is not what they wow, I'm even boring myself. Skip to the end. 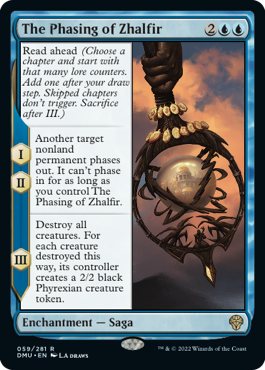 If you'd like a quick refresher on Sagas, there's one at the end of this section.

Read ahead is an ability found on the Saga cards in this set. A Saga with read ahead enters the battlefield on any chapter you want, meaning it enters with that many lore counters on it. For The Phasing of Zhalfir (and, in fact, all Dominaria United Sagas), that means it can enter with one, two, or three lore counters on it. But if you read ahead, you miss some things. Any chapters you skip over won't trigger.

For example, if your opponents have some large, unstoppable monsters threatening to end the game, and 2/2 Phyrexians (wait, Phyrexians? What are they doing here?) seem a bit more manageable, you can cast The Phasing of Zhalfir and have it enter with three lore counters. The chapter three ability will trigger. The chapter one and two abilities won't. Chapter three is still the last chapter, so once that ability is done resolving, you'll sacrifice The Phasing of Zhalfir. A quick read, but an effective one.

Here's the Saga refresher: Sagas are enchantments that enter the battlefield with a lore counter on them, causing the chapter one ability to trigger. At the beginning of your precombat main phase, you put a lore counter on the Saga. Two lore counters mean the chapter two ability triggers. This continues until the final chapter ability is complete, after which the story is over, and you sacrifice the Saga. Some recent Sagas have gone on to bigger and better existences as enchantment creatures, but for most Sagas, the story starts at chapter one and advances one chapter per turn until the Saga is sacrificed.

Domain is a returning ability word that highlights abilities that improve the more basic land types there are among lands you control. The basic land types are Plains, Island, Swamp, Mountain, and Forest. And remember that domain abilities care about land types, not names, so nonbasic lands with one or more of those types will count.

You always control between zero (you're doing it wrong) and five (you're doing it right) basic land types, and each domain ability will use that number in its own way. Nishoba Brawler, for example, uses it to define its power. 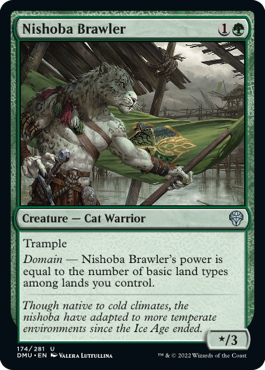 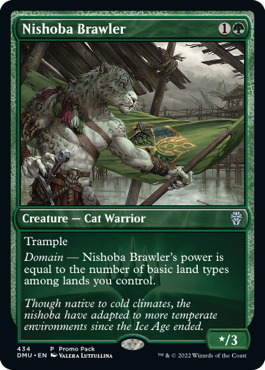 There are instants and sorceries that use domain to determine the magnitude of their effects. There are creatures with enters-the-battlefield triggered abilities that get more powerful. There are discounts. There's damage. There's a lot. Not to mention access to all those colors of mana and all the sweet cards that come with that. Dominaria is a plane that rewards exploration, so go see what's out there.

So, you've explored. You have access to more mana than you know what to do with. What now? Sit at home and write tired A Tribe Called Quest jokes? Not your style. You want to cast flashy spells, and kicker is the returning mechanic for you.

Kicker's premise is simple: Pay more, get more. Kicker is an optional additional cost that you can pay as you cast a spell. If you pay the kicker cost along with the spell's other costs, the spell is kicked, and the spell will tell you exactly what that means. 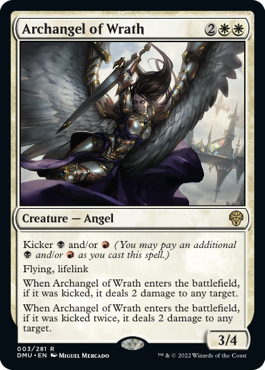 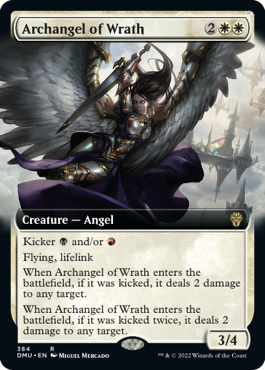 Archangel of Wrath actually has two kicker costs, and you can pay either of them, both of them, or neither of them. If Archangel of Wrath was kicked at least once, the first enters-the-battlefield triggered ability will trigger when it enters. If it was kicked twice, the second enters-the-battlefield triggered ability will trigger. These abilities can have the same target, or they can target different things.

Not every kicker card is so dramatic. Some instants and sorceries will have an additional or alternative effect if kicked. Some creatures may enter the battlefield with +1/+1 counters if kicked or, as with the Archangel, will have an ability that triggers when it enters if it was kicked.

Stun counters make their debut on a few cards in this set, and you'll see them here and there in future sets as well. Stun counters keep permanents (creatures, mostly) out of the action for an extended period. 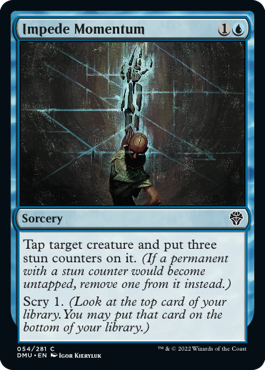 If a tapped permanent with a stun counter on it would become untapped, instead it stays tapped and you remove a stun counter from it. Stun counters can be put on permanents that are already tapped. For example, you can cast Impede Momentum targeting a creature that's already tapped. You'll put three stun counters on it and scry 1. That creature will have to try and untap three times to lose all those counters before it can finally untap on the fourth try.

The echoes of history reverberate around us. This is Dominaria. No one can say what trials await us, what enemies lurk in the shadows. It is impossible to predict what may come (but join us for Wizards Presents on August 18). As long as we are here, we stand with history. We stand with legacy. We stand united.