oming soon to a friendly local game store near you... Return to Ravnica Block, Episode III: Dragon's Maze. It is a period of guild war. The Dracogenius, Niv-Mizzet, has uncovered the Implicit Maze and has invited the ten guilds to... you know what? Just watch the video:


Step one: preregister. It's easy to shrug off this suggestion but I really do mean it. Prereleases keep selling out, so you need to get your name in now. Here's the store locator link for you (again).

If you need to know more about how to build a sealed deck or just want to brush up on those skills, check out Marshall Sutcliffe's handy guide to the Sealed Deck format. It is a really solid article looking at how to succeed at Sealed. And here and here are links to even more advice articles. (Links for everyone!)

Dragon's Maze features cards in all ten guilds of Ravnica but it has... (spoilers, Sweetie)... eleven mechanics. 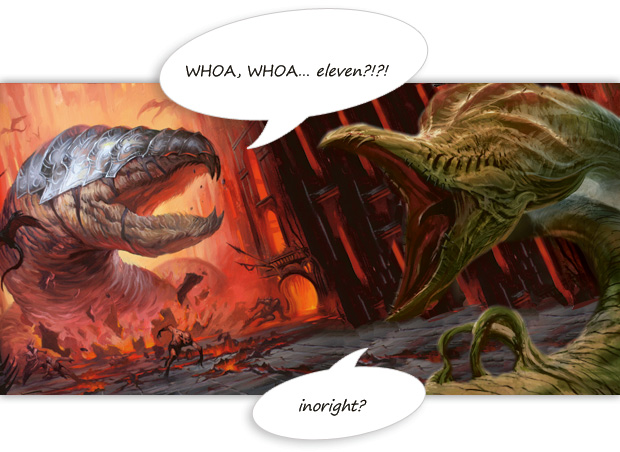 And, here, I will touch on said eleventh mechanic: fuse.

Dragon's Maze brings back the super-neat split cards (a split card is one card with two different mini-cards on it). Like previous split cards (such as, say, Dissension's ), in Dragon's Maze you will be able to cast one side or the other. BUT! Thanks to fuse, you may also cast both halves of the card at the same time. You resolve the effects from left to right. So let me take Breaking & Entering as an example: 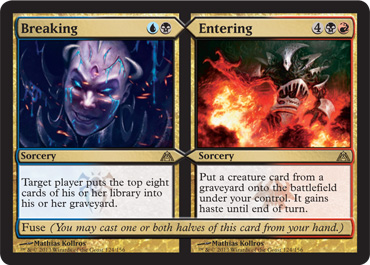 You may cast Breaking for , at which time someone puts eight cards into his or her graveyard from his or her library (mm-mm, milling). You may instead cast Entering for , at which time you get a creature from a graveyard of your choice (delicious reanimation). And (see the nifty combo here?) you may cast Breaking and Entering together (thanks to fuse) for , wherein you can make someone put the top eight cards of his or her library into his or her graveyard and then pluck a juicy morsel out of that selfsame (or whichever) graveyard and put it onto the battlefield under your control.

Now that you understand fuse (I hope!) it's time for me to move on to the major topics of this article: the land slot, the Prerelease promo card, the Prerelease guild packs, and the Implicit Maze event.

So you know how in most booster packs there's a basic land at the back? Well, in Dragon's Maze, there isn't. Panic not, friends, for there is yet good news ahead!

Instead of a basic land at the back of the pack, a Dragon's Maze booster pack will include a nonbasic land.

Usually—and I mean here in the vast majority of cases—you will get one of the ten Guildgates you're likely already familiar with from Return to Ravnica and Gatecrash. In Dragon's Maze, the art for each Guildgate is a new, zoomed out version of the same Gate as shown in the first two sets of the block.

In rare cases, though, you will instead get a Return to Ravnica or Gatecrash shockland (with the original art from the respective set). Haha, get it? In rare cases! Because they're rares...

The shocklands will show up less frequently (about half as often) in Dragon's Maze as they did in Return to Ravnica or Gatecrash.

And, once in a great while, you will instead get the mythic rare nonbasic land from the set: Maze's End. 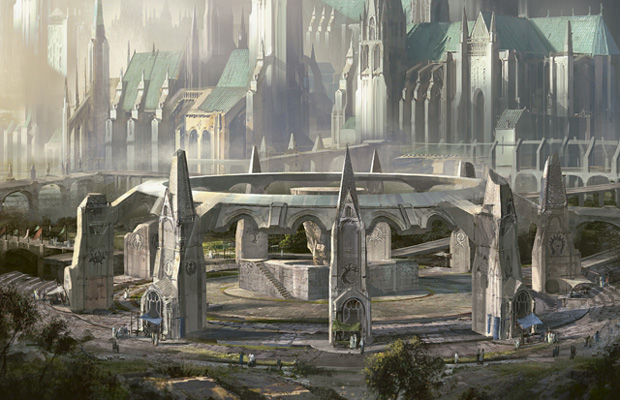 So wait, some of you might be thinking, does this mean we can open a booster pack with three mythic rares in it? Oh my, yes! It's possible to open a pack that has a mythic rare in the regular rare slot, a mythic rare premium (foil) card instead of a common, AND a Maze's End in the land slot. I know I wouldn't mind opening a pack like that!

There is only one alternate-art premium (foil) promo card for Dragon's Maze. Unlike Return to Ravnica or Gatecrash—but like every other Prerelease before them—that promo card isn't usable in your Prerelease deck.

For the first time this block you will be able to play all ten guilds of Ravnica! When you arrive at your store of choice (which you preregistered at because you are clever), you may choose whichever guild is your favorite. No more limitations. No more compromises. Your colors. Your guild. Your Prerelease pack.

I should note, however, that the guild you choose for the Prerelease needn't be the one you've officially selected on your Planeswalker Points page (but it can be the same, natch!). You're just representing it for this Prerelease.

In your Guild Prerelease Pack for Dragon's Maze you will receive:

Unlike the previous two Prereleases, for Dragon's Maze there are a few things your Guild Prerelease Pack will not contain: a guild promo card from the earlier Prereleases, Spindown life counter, sticker, or guild welcome letter.

Oh, and hey, here is that handy chart I promised! When you get your Guild Prerelease Pack for Dragon's Maze you will get the following, based on the guild of your choice:

Now then... what are you going to do with all those cool cards you opened and built into a deck?

What does it mean to run the Implicit Maze? It means playing Magic on behalf of your guild!

First off, you will receive a button with your guild symbol on it to clearly identify your affiliation. This is important because...

Your game store (with whom you preregistered, right?) will prominently display a poster showing Ravnica's Implicit Maze. On the poster will be ten guild symbols that track how far each guild has moved through the Implicit Maze. Between rounds of play, the tournament organizer will advance the various guild symbols based upon how many matches that guild's representatives won and how many players are in the event. Every victory you achieve helps move your guild forward through the Implicit Maze.

Guild pride isn't the only thing on the line, here. There are also prizes to be had!

Everyone who participates in the Implicit Maze will receive a premium (foil) basic land promo card. No matter how well your guild does in the race, you will at least get that! And did I mention it's pretty sweet looking? I didn't? Well, it is! It's a special alternate-art Plains exclusive to the Prerelease. 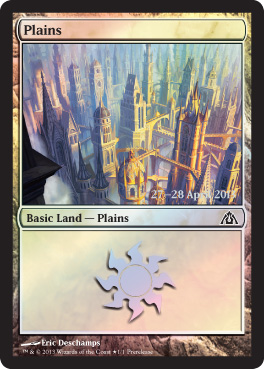 But wait, it gets better! If your guild makes it to the end of the Implicit Maze but isn't the first guild to do so, you will receive a special achievement card with a code you can enter into your Planeswalker Points page. You'll be able to proudly point to it and say stuff like, "Yeah, look at me. I'm a Maze Runner!" Not that you would, because who talks like that? But you could!

And if your guild successfully navigates the Implicit Maze first you will receive a different achievement for your Planeswalker Points page so you can show you are a Champion of the Maze. Then all the world can see that you and your guild knew what you were doing at the Dragon's Maze Prerelease!

The Implicit Maze is going to be a huge event and people will be lining up to get in. So I will remind you one last time before I stop pounding on my keyboard: find your nearest store and PREREGISTER!!!

And when you do get in (because you're smart and take my advice), I hope you enjoy yourself. Because it's going to be neat. :)