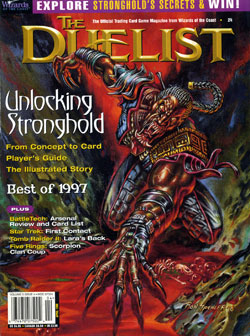 et me ask you a few questions. Who designed Monopoly? Who designed Trivial Pursuit? Now, ask yourself who wrote The Shining? Who directed Star Wars? Who wrote Moby Dick? Some readers of this magazine (and in particular readers of this column) might be able to answer the first two questions. I bet there might even be one or two of you who found the two game questions easier than the last three. However, to the vast majority of the general public, game designers don't rank anywhere near the level of authors or movie directors.

The companies that publish games get far more recognition than the actual designers of those games. To put this in perspective, see if you can recall the names of the publishers or producers of the above games, movies, and books, and compare how easy this question is to the one about designers, authors, and directors. You will probably remember Monopoly is published by Parker Brothers more easily than you remember who published The Shining (which naturally I can't remember).

One reason game publishers arc easier to recall than game designers is the lack of credit given to designers on their products. Although credit is usually given to designers in the adventure game industry, often this credit is not on the package, but instead is hidden inside the rules. Outside of the adventure game industry, it is common for a game to contain no reference at all to the game's designers. Now, compare this situation to the book trade, where publishers shout the author's name on the cover of the book; or to the movie business, where the director's name often appears in the advertisements as prominently as the names of the stars.

Even when package credit is given to a designer, this credit is often meager, as in the case of Titan: The Arena. This case leaps to mind because the game's author, Reiner Knizia, is believed by many to be the best game designer in the world. Yet, the credit given to Knizia is printed in the smallest make-your- eyes-bleed-we-legally-have- to-print-this font. You would hope a publisher would list Knizia's name prominently, along with a list of his other designs, so game players would see that this publisher believes it is using one of the best in the business.

The lack of credit given to game designers helps perpetuate the belief that game design is a commodity. I was shocked when companies in the adventure game industry told me the only thing that matters in a game is the motif; that designs are easy to come by and just about anyone can create them. 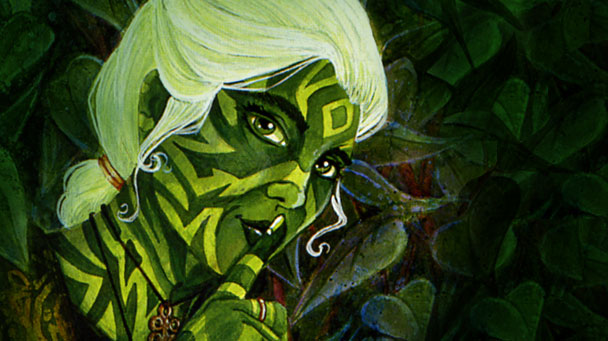 This lack of credit hurts the industry by putting game players in the position of making less-informed purchases. Players are denied the ability to invest their time and money learning new games by designers of games they liked in the past. Thus, players must purchase games based solely on a company's reputation, which can be a flimsy standard, because people routinely leave and join game companies. A company's attitude, motivation, and talent are less consistent than a single designer's. This also denies people the chance to vote against designers based on past performance. After reading a book I don't like, I'm not going to read another book by that author unless I get some rave reviews from folks I trust.

Another reason credit for the individual designer is valuable to the game is the matter of responsibility. If my name is on a game, I am unhappy if it doesn't meet a certain standard; much more unhappy than if I'm just part of the small print or not mentioned at all. A bad game reflects poorly on a company, but if you really want someone to be responsible for the success or failure of a game (or anything else for that matter), assign responsibility to a person, not a committee.

What can you do? Consider asking companies that produce games you like (or don't like) why they don't give package credit to their designers like the credit authors receive on their own books. I believe the quality of game design would rise if designers' names were boldly attached to their games, rather than hidden away or eliminated by corporations attempting to build up the company's name or product line.

How I Got Filthy Rich on my Summer Vacation 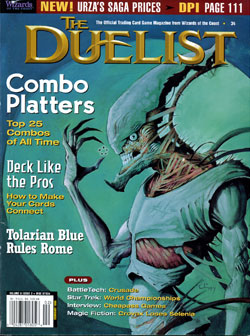 hile at Grand Prix Hong Kong, I walked down an alley where the density of business signs was a visual continuum of overlapping electric messages. As I walked, I passed some signs and saw newly revealed signs that had been previously hidden. I began to wonder about the strategy and politics involved in choosing a location for a shop and where to hang its sign, for surely your sign would obscure someone else's sign, and in turn be obscured by other signs.

This was the origin of Filthy Rich. Mechanically the game was a challenge to design, using a piece of equipment I thought would keep it from actually being published: a card binder and plastic sleeves. But the card binder was needed because it provided the perfect way to overlap signs. Business signs are placed on one of four plastic sheets, and can cover signs below or be covered by signs above.

Since the plastic is clear, you can see a sign on the bottom sheet from the top (provided another sign doesn't cover it). Depending on whether you're looking at the top, bottom, or one of middle sheets, you see a different array of business signs. At the end of each turn, you roll a number of 10-sided dice. Each result corresponds to one of the nine slots on the sheet (the 10 means taxes are due!).

Customers visit businesses hit by the dice and each lucky owner gets some cash. The number of dice you roll corresponds to the amount of traffic on that page. At the back of the alley—the bottom sheet, that is—the traffic is low, and so you only roll one die. At the front of the alley, or the top sheet, the traffic is high, and you roll four dice. Each turn you randomly determine which page you are on. Thus, page values fluctuate through the course of the game.

At the start of the game, the back of the alley is excellent since the sign can be seen on every page. Later in the game, as the binder becomes more crowded, the signs of the back-page businesses get covered so they only show on the last page, where traffic is lousy.

My biggest concern when designing Filthy Rich was avoiding a characteristic of many "build and collect' games, like railroad and Monopoly-type games. These games tend to fall into two stages: the building phase and the money-collection phase. I don't mind several phases in games, but the money-collection part of these games can become uninteresting, as people sit around waiting to see who rolls best.

I fought this problem in Filthy Rich by introducing taxes. Each time a player rolls a 10, taxes are due for all players. Most businesses and some other cards in the game require you to pay earnings to the bank whenever taxes are due. At this point you can sell your business or pay your taxes.

With some businesses you should sell as soon as taxes are rolled because the business is cheap and the taxes are high. Other businesses are painful to sell because they cost a lot more than they sell for, so owners will tend to ride out the taxes. Most of the time it's a judgment call based on the cash you have and how often you expect the business will be visible. Thus, businesses open and close throughout the game, often making the entire game take place in the "building" phase!

The object of Filthy Rich isn't merely to accumulate money, it's to use that money to buy luxuries. Early luxuries are cheap, but they get more expensive as the game progresses. Thus, some players are tempted to buy luxuries early before getting on solid financial ground. Plus, luxuries usually have associated taxes, so players who get out to an early lead can easily get into trouble (you can't sell luxuries to escape taxes). My favorite luxury is the trophy spouse, which is fairly cheap but has double taxes, making him or her expensive to maintain.

Filthy Rich began as "Hong Kong Signs" and there were probably a dozen significantly different versions over the course of the year of development. (The game has many design elements I had not dealt with before.) The final product is a wild game with huge swings of luck and plenty of rope players can use to hang themselves. If you get a chance to play, try to open the Shmoo hut or Tic Toc's, but be careful with the trophy spouse and when dealing with the Yakuza!