ack in May, we announced Planechase, a "whole new way to experience planeswalking." We told you about the four game packs, each of which contains a 60-card deck and 10 all-new oversized "plane cards." In July, we showed you the four game packs—Elemental Thunder, Metallic Dreams, Strike Force, and Zombie Empire—and even gave you a glimpse of some of the plane cards' art and names.

What we couldn't do yet, as you might have noticed, was tell you what plane cards do, and how Planechase actually works. Let's fix that, shall we?

Planechase gives you everything you need to play Planar Magic, a new casual variant that sends you and your friends on a tour through the Multiverse. Each plane you visit—represented by a plane card—changes the nature of the battlefield. You never know how long you'll stay or where you'll go next, and the result is an ever-shifting race to exploit the unique nature of the plane you're on ... or to planeswalk away from a plane that your enemies can take advantage of!

We'll take a look at a plane card in a moment, but to know what you're looking at, you'll need a little bit of background.

You can use Planechase rules in two-player games or your multiplayer variant of choice, but Planar Magic is intended for multiplayer free-for-all games with 3 to 6 players. Each player needs a normal minimum 60-card Constructed deck (such as, say, the one in each Planechase game pack) and a planar deck of at least 10 plane cards (fortuitously, also included in each game pack). Your planar deck is shuffled like your regular deck, and you can't look at or rearrange the cards in it. 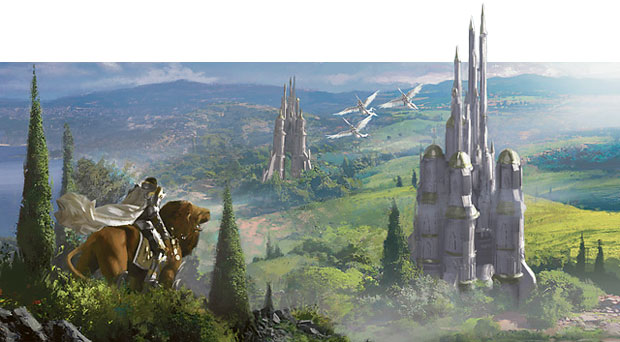 You'll also need at least one planar die, also included in each game pack. The die has six faces, four of them blank. One face has the planeswalker symbol:

The last face has a new symbol on it. It's called the chaos symbol, but plane cards refer to it using the symbol itself. It looks like this:

Now that you've got everything you need, you can get to the action. Determine who goes first, shuffle your decks, draw your hands, and resolve any mulligans as normal. Then, before the game starts, the player who's going to go first turns the top card of his or her shuffled planar deck face up. Let's say it's, oh, this one: 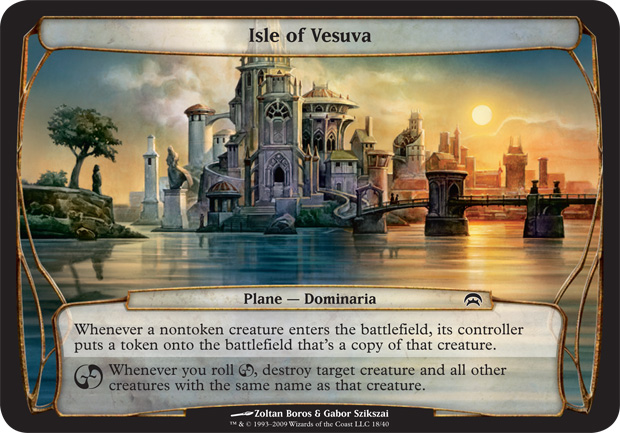 Plane cards are Magic cards, and the text on them follows most of the rules you're familiar with. Each plane card has a name, a type, a subtype, and at least two abilities. Oh, and gorgeous, all-new, landscape-oriented art, but that's not really a rules thing.

Before we look at the parts of a plane, take a look at these true facts about plane cards:

Got all that? Now let's look at the parts of a plane card.

Name: A plane is a big place—way too big to fit on just one card—so each plane card represents just part of a plane. The card's name tells you which specific location you've arrived in on the plane to which you've planeswalked.

Type line: As with other Magic cards, this line contains the card's type, subtype, and expansion symbol. "Plane" is a card type, even though you never put plane cards in your regular Magic deck. Each plane card's subtype tells you what plane it's on. Among the plane cards' subtypes, you'll find a mix of familiar favorites, like Ravnica and Dominaria, and previously unseen planes like Moag and Zendikar. (What's that? There's a sneak peek of Zendikar in today's Arcana? Well, we suppose it won't be previously unseen, then ....)

Abilities: Generally speaking, each plane has one ability (the top one) that's "always on," and another (the bottom one, in the shaded part of the text box) that triggers when you roll the chaos symbol on the planar die. When do you roll the planar die? We're glad you asked.

Now that you know how to read a plane card, it's time to learn about planeswalking. You are a planeswalker, after all. Isn't it about time you took a stroll across the Multiverse?

During your turn, any time you could cast a sorcery, you may roll the planar die. You can do this multiple times in the same turn. To roll the die, you must pay an amount of mana equal to the number of times you've already rolled the die this turn. So the first roll is free, the second roll costs

, and so on. Rolling the die happens immediately (no one can respond to it), but any ability that triggers as a result goes on the stack, and can be responded to like other triggered abilities.

Why might you want to reroll the die? Rolling the die could have three results: 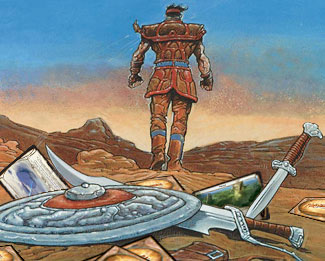 In multiplayer games, unlike duels, you have to figure out what happens when a player leaves the game (because that player lost the game or conceded). Fortunately, there are rules for that sort of thing.

Now let's figure out what happens to the face-up plane card when one or more players leaves the game. The player(s) leaving the game might include that plane card's owner, its controller, both, or neither. First, check whether a departing player controls the plane. Then, whether or not that's the case, check whether a departing player owns the plane.

The reason we get so specific about the timing of those steps is because, as we said, some cards have abilities that trigger when you planeswalk away from them. What sort of ability, you ask? Well, something like this: 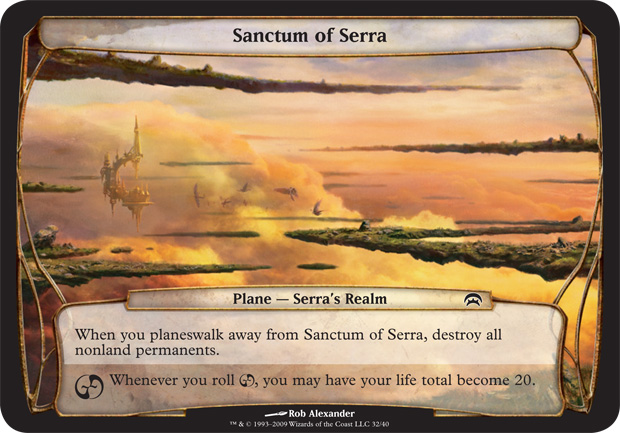 If a departing player both owns and controls Sanctum of Serra, a new player takes control of it just long enough to put that ability on the stack. Boom!

The Planechase decks work great right out of the box, but that's just the beginning. You can customize the 60-card decks or swap them out for different decks entirely. But you can also customize your planar deck with any (or all!) of the 40 planes among the four game packs. There are only two rules about your planar deck's composition:

Alternately, you can use the shared planar deck variant. This is perfect if you've got all four Planechase game packs, but your friends don't have any. It's also good if you'd prefer a more chaotic play experience, rather than one in which the planar decks are tailored to match the Constructed decks they're paired with.

Because Planar Magic is a casual format, you can play it with any variations your group is willing to try out. You can try out Planar Two-Headed Giant, Planar Star, Planar Elder Dragon Highlander—whatever you want!

So that's everything you need to know about Planechase! Well, except for the contents of the four 60-card decks, which are drawn from many different sets from Magic's history. Oh, and the 40 unique plane cards. You probably want to know what those do, and what planes they represent, and what locations on those planes. All that, however, will have to wait for another time.

Each Planechase game pack has an MSRP of $19.99, and all four of them will be released on September 4, 2009. (Check your calendar—it's closer than you think!) Planechase is English-only, but it will have rules support in Japanese, French, Italian, German, and Spanish. Planechase release events will be held September 4-6, 2009 at participating venues. In the meantime, you can download the rules in English (270K pdf) and stay tuned to magicthegathering.com for more Planechase updates.