They've ruled for far too long.

eysa sat in her favorite chair, made from Utvaran ebony, and let the blasphemous thought dwell in her mind for a while. She savored the feeling that it generated within her—a thrilling blend of sacrilege and freedom. 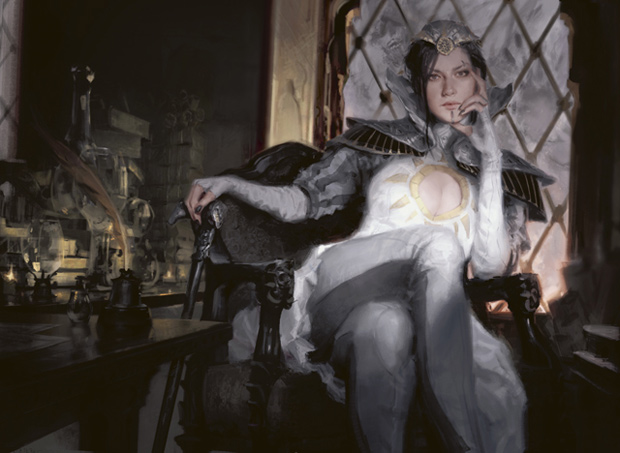 Certainly, there was danger ahead of her. The Obzedat had given her the title of grand envoy, but Teysa knew it was so they could keep closer tabs on her—constantly testing her loyalty and keeping her busy with endless "official business." Teysa was no stranger to the game and she knew she could only gain so much influence on the side of the living before feeling the phantom strings of the Obzedat pulling her into their domain. And Teysa had been steadily increasing in power. She had felt their strings pulling for quite some time.

She'd had enough of these dead, old men.

The Generational Manifesto for the Orzhov's Future sat on her desk. The ancient tome had not gathered a mote of dust since her days as a young advokist. Teysa had read it from cover to cover several times, but this last time she did so from a different context. The words took on a whole new meaning. Teysa's eyes were opened; no longer was she that ambitious, young advokist who entered a ruthless world of power and lies. Lately, Teysa began to see herself as a stand-in for something new within the Orzhov that had instilled her mind with deep conviction and ideas. She wanted to gut the Orzhov guild and reshape it into a new kind of power that Ravnica had never seen.

She picked up the heavy book and opened it to the most recent quote that rung in her head.

"Freedom from the mortal connection to crude coinage and simple riches allows the members of the Obzedat to pursue true and holy power, unshackled by worldly concerns. So why do they still pursue the coin with as much fervor as ever?"
—Anonymous

Simple but audacious words that eventually led to "Anonymous" being hunted down and put to death. No one outside the Orzhov elite knew the full story, but those within the Orzhov families knew Anonymous was an aristocrat named Tihana Jarik. Jarik was known within the Orzhov elite for speaking out against the Obzedat. At first, it was considered an eccentricity of Jarik's Orzhovan blood, and her family name kept her safe until she began publishing essays critical of the ghost council. Those essays and her refusal to desist led to her arrest, trial, and public disintegration in the Forum of Orzhova.

Teysa had spent a small fortune in coin and favors to a trusted Dimir contact to secretly procure the rare and incendiary writings of Jarik. They were in Teysa's collection but hidden far away, under lock and key and several high-powered, magical wards. To possess Jarik's words was to be guilty of the same crimes Jarik was put to death for. But Teysa had stopped giving a damn about what the Obzedat could do to her and had started to focus her formidable mind on what she could do to them.

A few days earlier, the Obzedat had used a Deathpact to deliver the message. A terrified scribe blurted out the message to Teysa within the confines of a verity circle. Teysa listened with the intensity of a cat watching a mouse hole. The maze started off as a passing interest for the Orzhov, another strange Izzet obsession to be monitored but not taken too seriously. Teysa could feel this new information shifting the game. The maze had become vastly more important and that was something the Obzedat had no plan for. And she knew it. 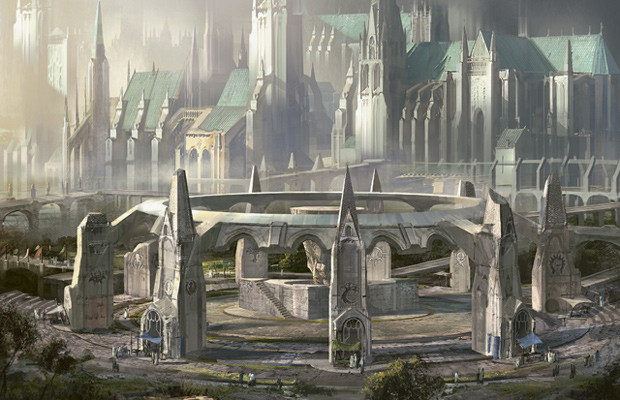 The Obzedat's greatest weakness was that it was composed of spirits playing a corporeal game—they needed someone on the other side of the veil they could trust with matters of great importance. Up until then, Teysa had been their reluctant answer. She could feel their frustration of having to divulge their urgency to Teysa with this task of running the maze and finding out its ancient secret. Would it be unbridled power? Would it be a vast fortune? Would it grant rulership over Ravnica? Teysa knew the Obzedat was truly worried about what could happen; the maze was out of its control and the clock was ticking. Teysa was its best bet at solving the maze. Now she had the upper hand—she had something the council wanted.

As she looked out from her balcony, she couldn't contain the smirk from the sheer delight of it all.

Her thrull wheezed over and bowed before Teysa.

"Send a messenger and bring Master Tajic of the Boros to my study."

Tajic sat in Teysa's study. The sound of Teysa's cane on the tile floor heralded her arrival. As she walked in, the Boros knight stood and smiled, his white teeth seemed somehow feral against his olive skin and black goatee. He offered his arm and aided Teysa to her chair. His arm felt like coiled steel.

Teysa could tell his eyes took in every detail of his surroundings. She could sense Tajic's intellect but she could also sense how he radiated danger. Even though Teysa was anything but a warrior, she supposed Tajic could tear apart the guards that stood outside her door and everyone else within her mansion if he chose.

Teysa motioned for Tajic to sit. "I'll get right to the point. I know you to be a man of your word, Tajic, and unquestionable integrity is something that I value above all things—coin, land, or even power. We both know that integrity is power and that which has no integrity has no power."

Tajic's eyes sparkled. He liked this Orzhov aristocrat; she was a fighter and a visionary. "You have always been a friend to the Boros, Teysa Karlov, even when our guildmasters have not seen eye to eye." His accent was thick and he spoke it with an assurance which, no doubt, had irked his elocutionist in the Boros Academy. "Your efforts in curing the Kuga Mot, restoring the Utvara, defeating Zomaj Hauc, creating a new Guildpact—all these actions speak to your character. I know Ravnica is not just a commodity to you." 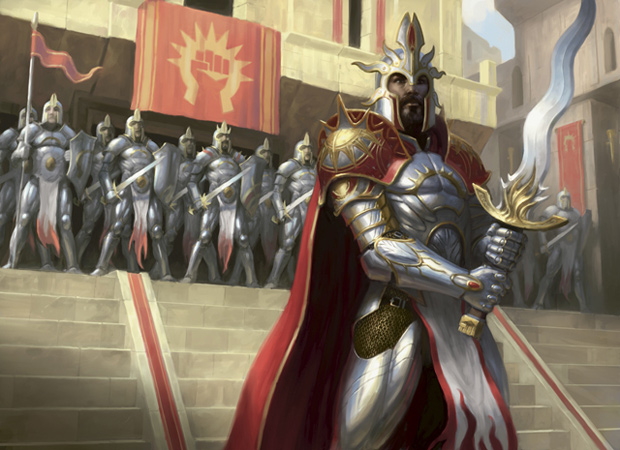 "I am glad you see me without the usual cynicism." Teysa sipped her tea. "Most do not afford me the simple capacity of what it is to be human, let alone consider that I actually care about the wellbeing of our city without thought of profit." Teysa looked over the rim of her cup.

Tajic leaned forward in his chair. "I knew that you appreciated the law and what it means for Ravnica. That is why I accepted your invitation to talk today." He leaned back. "I have to be honest with you, Teysa Karlov, I have always admired your courage from afar but now that I am in your presence, I can sense what makes you a great leader." Tajic said the words with no hint of subterfuge or guile; Teysa felt a slight blush come to her cheeks.

"You do me honor, Sir." She took a self-conscious sip of tea.

There was a long pause. The two sat in silence, sipping tea, Tajic with a sphinx-like expression that betrayed no emotion and Teysa feeling this was the oddest Boros commander she had ever encountered. He was perfect for the task. This was the man who would help her achieve her goal.

Teysa took a breath, the kind of breath one takes before opening a door from which there is no return.

"I would like to form an alliance with you. A special kind of alliance that requires absolute commitment and dedication."

Tajic smiled as if expecting Teysa's request all along. "You want me to help you run the maze and steal the prize from the insatiable claws of Niv-Mizzet? My pleasure."

"No," Teysa said. "I want you to help me destroy the Obzedat." 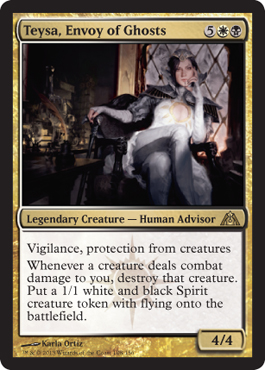